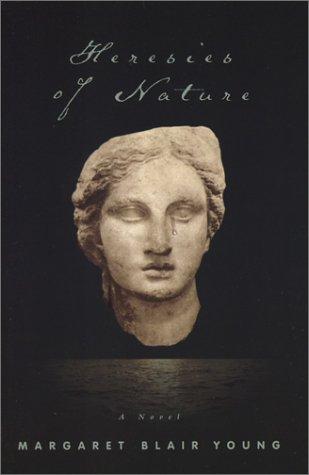 Heresies of Nature, Margaret Blair Young’s 2002 novel about a Mormon family gripped by a chronic, unpredictable illness, begins with a bit of authorial slight-of-hand. A narrator’s voice and an author’s voice are easy to confuse, and Young takes advantage of it by starting out as herself, speaking intimately to “Nancy,” the unnamed, real-life inspiration for Merry Boswell Morgan, the wife and mother who is her central character. As she assures Nancy that, “This book is not about you and those you love, but you are its springboard and soul,” a transitional moment arrives and just that quickly the novel has begun. Readers won’t forget this fiction is based on real events, even as Nancy has become Merry and her husband Andy has become Ben Morgan. Significantly for the multiple viewpoint structure and complex chronology ahead, the story begins in the middle, at the point where Ben has just met Cody, a persuasive stranger who shakes up the family just as they have accepted their roles in the struggle.

In spite of being centered on one person’s illness, Heresies of Nature tells a sprawling story, touching on four generations of two allied families of Utah Mormons. We all locate ourselves through our stories, and Young uses individual histories as modules that allow each of the misfortunate affected by Merry’s illness to take a turn at the center of attention. The resulting leaps in time backwards through their memories, including Merry’s journal, which Cody finds and reads, sift and clarify events.

Merry is not really the protagonist of her story; she has Multiple Sclerosis, one of several auto-immune diseases that some sufferers live only moderately uncomfortable lives with, while others are devastated. Readers will learn about MS, though not so much as to turn this into a medical drama or make the storyline predictable. Creative writing students are told to “write what you know” — the inference being “only what you know.” Margaret Blair Young taught writing at BYU for 30 years, all the while deliberately repudiating that constraint. She wrote about Mormons, yes, but before Heresies of Nature she set their stories in Germany during World War II and El Salvador more recently. The most popular were two volumes of short stories that explore relationships ranging from the odd to the truly remarkable. In one example of her centrifugal storytelling, actually from Heresies of Nature, a pregnant teenager who cannot keep her child will gift it to her older sister, who lost her ability to be a mother in a catastrophic miscarriage.

Further examples of Young’s willingness to transcend her experiences as a teacher, writer, Mormon wife, and mother of four children show up in the sometimes elaborate connections she finds between her characters’ lives and life in general. Ben is a geology professor who may view life in geological metaphors: Merry is turning to stone; Life is at times igneous (hot, fluid, on fire); metamorphic (pliant, under great pressure, transformative); or sedimentary (formed from accretion of older matter). Ben and Merry met while they were rescuing birds and animals from an oceanic oil spill, and her love of the sea leads Ben to create an artificial marine world for her in their home. Other predictable Utah avocations — gymnastics, camping, fishing, caving — further help to stitch all these personal views together while keeping events familiar.

Chronic illness can do immeasurable damage to lives, marriages, and whole families in ways far beyond the immediate impacts, and Young manages to explore some of these in ways that inform readers without seeming didactic. Short-sighted government policies don’t allow Medicare and Medicaid to support the disabled so long as the family still has either money or property of their own, and MS is not the only disease that can force spouses to choose between divorce or impoverishing the family. For a temple-wed Utah family, this dilemma takes on a new, larger dimension it might not have in another place. Family members who witness the gradual deterioration of a loved one may come to believe they are genetically cursed, and so draw back from their own lives. Loneliness breeds estrangement and guilt over natural longings that come to seem selfish. Siblings may be unable to marry into families that share that fear, or they suffer survivor’s guilt for having eluded the sickness. Family members form alliances out of perceived necessity that interfere with the proper flow of their feelings and loyalties for each other. Those who don’t handle these pressures the way others think they should, even when those others have no first-hand experience with the core tragedy, may lose all authority in their community.

This loss of authority is especially grave in closely interconnected communities. The Cache County location of Heresies of Nature places the story among traditional Mormons, who look to the bishopric for leadership, and precludes some options for a writer who wants not to alienate her audience. It’s clear from online comments that while some non-Mormon readers found this quality in the story intrusive, readers within the faith may have been disappointed that the spiritual elements don’t go far enough in taking advantage of fiction’s freedoms.

Clearly, Margaret Blair Young set herself a challenge, beginning with her decision to tell fictional stories about real problems instead of fantasy events, then wanting to meet the demands of irreconcilable audiences. In time, she may have decided that there were actions she could take in the real world that offered more direct help. While her later career, as a theatrical producer and filmmaker in the Republic of the Congo, lies beyond the scope of this review, interested readers can follow her books with a factual adventure.