Julie Mehretu’s “HOWL, eon (I, II)” at the San Francisco Museum of Art.

Lydia Gravis, an artist who lives and works in Ogden, where she’s gallery director of the Mary Elizabeth Dee Shaw Gallery at Weber State University, earned her MFA from Lesley University College of Art and Design in Boston. The artist she loves, Julie Mehretu, a native of Ethiopia, earned her MFA from Rhode Island School of Design in Providence, Rhode Island, about an hour or so away. Yet Gravis says it took three thesis advisers “to point out the connection between her work and mine. I didn’t used to see it.”

The large-scale abstract paintings and drawings Mehretu creates leave Gravis “with a feeling…a sense of energy…a sense of urgency.” She says that like a group of friends confronting one of their members with an obvious crush they keep denying, her grad-school thesis advisors kept pointing out the connections between hers and Mehretu’s work. “Once I relented, and started researching Mehretu’s work more and more, I found the similarities. She says that some of her work deals with things that ‘we don’t have proper language for.’ It also deals with how (politically) charged a landscape can be. Landscape is never just landscape, she says, it’s defined by what takes place on it, what it pays witness to. I think she and I both use repetitive mark-making as a way to find answers,” Gravis observes. “Or perhaps just as a means to respond to the world when there aren’t easy or apparent answers.

“My work essentially explores inner landscapes…liminal psychological spaces of human experience that aren’t easily defined. I consider mark-making an empathic endeavor, and find that it connects me to the world around and within me,” she states. 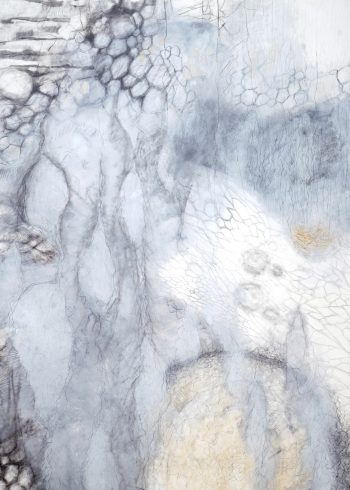 “Neither Here Nor There,” Lydia Gravis

In “Neither Here Nor There,” Gravis says she was inspired by ”the enigmatic, but persistent, psychological space that dominates a person’s experience with terminal disease: Combining imagery derived from the biological inscape of the human body with how I imagined the psychological experience of illness to feel, I made this drawing with heavy questions weighing on my mind.

“Questions such as: What is the color of grief? What does it feel like to transition through stages of physical decay? Does a person’s sense of self diminish as their body does? These were heavy and uncomfortable questions, but ones that connected me more deeply to the wondrous experience of being alive, and how finite this experience truly is.”