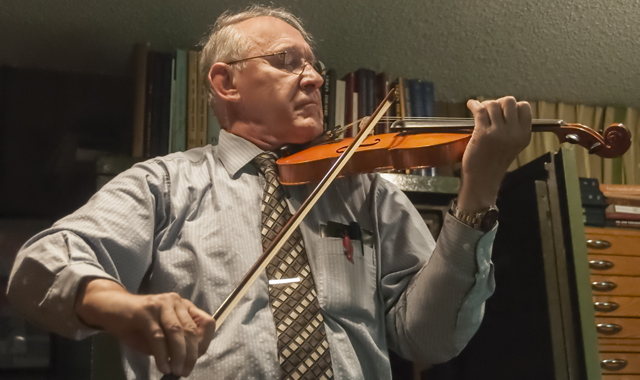 Walking into master violin maker Peter Prier’s downtown shop for a conversation is a particularly charming experience: someone cleverly rigged a violin up above the front door, the strings strumming in every new entrant.

I reflect on the unassuming approach from 300 East 200 South, where an enormous Old World mural of violin-making acclimated me to this morning’s adventure.|0| I, like many locals, have passed by and wondered over it, then turned the corner to awe in crescendo over embryonic carvings in capacious windows, passing finally by the statue of a luthier toiling in front of the shop.

But today, fantastically, I have actually wondered myself inside.

First I meet Prier’s son Daniel, who shows off a pochette, or pocket violin. He explains that in addition to it being a colloquial performance instrument, conductors once used it to set a pitch for the rest of the orchestra. When Prier joins us, he is a contrast to the gathering bustle of the shop.|1| Impressed by his patient demeanor, I fall fully into intrigue for what brought him to Salt Lake City and how his shop came about.

It started in Bavaria, with a discarded violin in a World War II bomb crater. Prier’s grandfather discovered it, refurbished it, and bestowed it upon the grateful 7-year-old. “I saw in it neck, shoulders, waist—just missing a head and legs.” His corporal interpretation at once reveals the life this artist first saw and still sees in the instruments.

It also begins to explain why Prier became not only a violinist but a –Sculptor? Carver? Prier and his son Daniel assure me that a being a luthier is similar to both. “But with one difference,” Prier specifies. “This is not exactly like making a wood bench, because it has to sing!“

“And variances are so exact,” his son Daniel adds. “Three-fourths of an inch is a mile for a luthier.” That precision was part of the draw for the young Prier. At 14, he had completed high school and was interested in working with his hands. A radio show featuring the nearby Mittenwald Violin Making School aired in sync with his ambitions. “Thirty minutes later, I was convinced.” After studying there, he immigrated to Salt Lake City to work at Pearce Music Company, arriving so late at night that only in the morning did he see his mountain views. He made up his mind to never leave. Beginning in 1965, he performed with the Utah Symphony. He opened his first shop the same year, and seven years later founded The Violin Making School of America (VMSA).|2-3|

Today, the school averages 22 students, who, 3.5 years, 7 violins, 1 cello, and a thesis later, emerge among the best-trained in the world.|4| Charles Woolf now owns the school, and Prier serves as Director Emeritus. “I go over there and show them antiques, you know,” he says as he opens a case and presents a Giuseppe Guarneri violin owned by collector Ferni, and played by Paganini himself.|5| Ferni’s daughters, the authenticated story goes, took turns practicing on it day and night. He is particular to direct my attention to how well this instrument has been preserved, and describes the exterior’s finish in terms of reds and purples. Originally, varnish was mixed by apothecaries to achieve hues now revered, similar to the mystique surrounding ‘the Stradivari Secret’ (Guarneri and Stradivari are considered the world’s greatest violin makers in history). Odd it may be, but pregnant beetles harvested from a cactus in South America form the base of the traditional recipe, which is still used today.

It is the luthier’s attention to craft that makes the artform so unique, and so sought after. For Prier, varnishing constitutes the most challenging step in his artistry. By contrast, most luthiers find the beautiful scrolls and F-holes near the middle of the instrument are the biggest challenge. But Prier discovered his knack for these artistic elements early on, and in fact paid his way as a young artist producing those very components for shops. As for designing the ribs, tailpiece, and a whole gamut of other steps, he tells me simply that although it does get complex, the goal is musicality. An even sound must be achieved from the E to G strings; the pitch of the violin cannot be shrill and the instrument must blithely elicit a tone. I smile because he is holding the antique violin as he describes all this, bow in hand, and I know it will be difficult for him not to play something.

The spontaneous performance is gorgeously proximal, both due to the size of the room and my closer, more quantified awareness of the patience both instrument and performer represent. “You see, I love to play. That’s the thing,” he smiles. “It gives me an idea how it could be made better. There is no such thing as good enough. I could make a violin today and improve upon my last one.”

Prier can recount his creations with business-meeting precision: 170 violins, 17 violas, 40 cellos, 2.5 basses (he outsourced the other half of that last bass, and laughs, calling it his ‘Mount Rushmore Project’), and 3 guitars. As stand-alone pieces, each instrument is a feat, taking about a month for a master such as himself to complete. Recently, however, he finished a body of work at yet another level entirely: a quartet comprised of two violins, one viola, and one cello. “To make it sound like they all love each other is a difficult thing. The first violin is brilliant and makes the biggest sound—it is the soloist. The second violin must be very close to it. The viola will be closest in sound to the cello, so you see the difficulty.” Utah Symphony players will be performing on Prier’s quartet instruments October 20, 2012 at the Salt Lake Recital Hall, a venue he also founded and which sits adjacent to the main shop.

My final question regards which trait violin-making has most demanded of him. The answer is in harmony with all I have seen today: “Patience. One has to be less aggressive to others, and to the violin structures themselves, or it just doesn’t work.”

As I leave my conversation with the engaging Peter Prier, it is a reluctant exit, though the strum of the door reminds me of how rare the whole experience has been. I pass the statue, school windows, and mural in a kind of rewind accompanied by a new perspective, such that I find myself mentally listing a few of my own projects that could use more artistic patience.

To learn more about the Violin Making School of America visit http://www.vmsa.net.

Tagged as: by Cindy Grigg, photos by Gerry Johnson