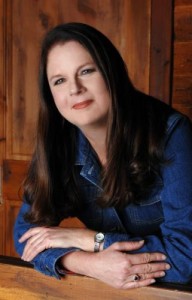 Julia Corbett knows something about homesteading, having done so herself in the wilds of Wyoming. Her memoir Seven Summers (University of Utah Press) chronicles not only how to pick a chain saw to clear your ten acres of forested land, but how a Paiute looks at an aging doe; not only how it is that wood stain goes “EVERYWHERE” when trying to do-it-yourself and the Wyoming wind picks up outside the cabin you’ve built but how to deflect your therapist’s comment that you need “to be needier,” when dating. In fact, Corbett’s book has been called “an expressive memoir of a personal journey of independence and discovery.” (Booklist).

As a professor of communication at the UofU Corbett writes not only her publish-or-perish academic research but creative nonfiction as well. This former park ranger, naturalist and press reporter not only joins the ranks of Henry David Thoreau but sister writer Elinore Pruitt Stewart, plucky author of Letters of a Woman Homesteader and Letters on an Elk Hunt. Stewart homesteaded in relatively nearby Sweetwater County, Wyoming on the Burnt Forks River, a tributary to the Green, and has become something of a cult figure for the back-to-the-woods woman.  While Stewart was a product of her age (and the Enlarged Homestead Act of 1909), Corbett is a product of ours. Her outing is told from the perspective of someone who lives in an urban environment of 2013 (Salt Lake City) and one who carries the baggage and blessing of our Baby Boomer age—technology, a feminist outlook, divorce, higher ed. etc.

Each of these accomplished Utah authors explores our fundamental relationship with landscape in unique ways—through fiction and non-fiction, plays and teaching. At this event, you may not learn how to wrangle that chain saw. But it is billed as a stimulating conversation that explores how we can better understand our crucial home territory through the lens of literature.

An excerpt from “Seven Summers: A Naturalist Homesteads in the Modern West”  by Julia Corbett

Used with permission from University of Utah Press

Through the years, I’ve witnessed friends embroiled in bad marriages, or settling back unhappily in mediocre marriages. At times, I envied their having a built-in date or travel partner (“Yeah, but he doesn’t like to travel”) or sex mate (“You know the last time we had sex?”) and especially a partner to share things with, to laugh with, to partake in the load (“That’d be nice, wouldn’t it?”). Happy marriages seemed few and far between.

At the same time, some married friends envied my solitude and possessed an overrated sense of what it’s like to be single. “You’ve got it great,” one said. “You get the whole bed, can eat what you want, and you don’t have kids to cart around. God, sometimes I daydream about being single…”

“Being single isn’t just about having alone time,” I told her. “It’s like the difference between a day hike and a solo backpack.” It’s a metaphor I’ve employed several times to help people understand.

When being single is like a day hike, it’s idyllic. For one hour or five hours, you have peace and solitude and luxuriate in your own thoughts, totally uninterrupted. You hike at your own pace and stop when you want. It’s quiet and you hear wind in the trees, birds chipping, and you come back refreshed.

But when living single stretches from one year into the next, it’s like a long solo backpack. You shoulder all the weight, and you can’t divide the burden of big items like the stove or tent. You are solely responsible for navigating, which is okay when the trail is clear and obvious, but hard when you encounter obstacles and there’s no one who shares the stakes. The view from the peak is magnificent, but there’s no one to ooh and ahh with, or to laugh with when dinner is spilled in the dirt. When you’re tired or hurting, there’s no one to lean your body against and listen to his breathing and heartbeat as assurance that life thumps on and you share the same air with another. (pp. 131-132)