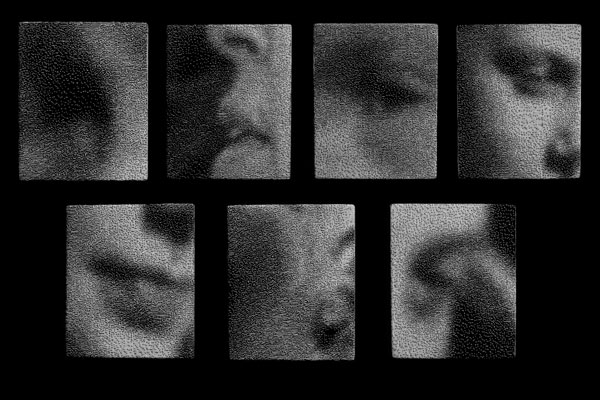 One fascinating aspect of Contemporary art has been its interest in expanding the canon of materials used in its creation. Moving beyond traditional painting, drawing and sculpture, we are beginning to see a wide, essentially endless, array of sources. This opening of the material canon has also opened the doors for many textile-based “crafts” to enter the doors of the museum and art center on equal footing with painting and sculpture. It is serendipitous that four major Utah art centers, in Salt Lake, Park City, and Provo, are currently exploring this use of textiles in the creation of art. Brigham Young University’s Museum of Art’s new exhibit, Tapestries, is a precursor to our Contemporary trends. Tapestries initially had a utilitarian purpose – covering cold castle walls — but also became an avenue for the reproduction of fine art, including Renaissance masters such as Raphael, and, as the BYU exhibit demonstrates, modern masters like Picasso. Quilt making, originally designed to cover cold beds, is another originally utilitarian craft that has recently taken on greater acceptance as a method for art making. An exhibit at the Utah Museum of Fine Arts and two of the three current exhibits at Park City’s Kimball Art Center explore the use of quilting as an art form. The recognition of textile-based art forms like tapestries and quilts has led to artistic explorations of the possibility of textiles, not just in traditional forms but also as basic building blocks for art. The third exhibit at the Kimball Art Center and the Salt Lake Art Center’s current exhibit, Material Culture, examine a variety of contemporary artists’ use of textiles to create their art.

In the Salt Lake Art Center’s Material Culture: the Fine Art of Textile, which opened June 24 and hangs through Sept. 30, six women explore civil and social concerns through a variety of textile media including weaving, hand and machine-aided stitching, felt making, quilting, embroidery, and painting. “All use textile and associated techniques,” writes Jay Heuman, curator of education at the Salt Lake Art Center and curator of this exhibit, “but each is a solitary and significant representative of one technique without duplication. All are included for their common threads and divergent techniques.” Heuman points out that there is “some recurrent theory, something beyond technical manufacture which incorporates a theoretical foundation and approach that is symbolic.” For example, Jean Hicks’ installation entitled “Filter” is overflowing with personal symbolism. A felt dress literally grows throughout the duration of the exhibit. It has been infused with nasturtium seeds, which are watered daily and put under the appropriate lighting to encourage growth and flowering. Potatoes wrapped in felt on a mound of dirt are beginning to sprout, and a hand, made of a dirt and clay mixture, rests on a pedestal. Everything is white with the exception of a red hat.

All of the works in this exhibit are contemporary in the sense that the oldest piece on display was completed in 1998. From Judy Singer’s paint-dipped cloth on canvas to Susan Taber Avila’s web-like sewn sculptures, we are reminded of the vast possibilities that textile art holds. Elaine Reichek’s embroidered samplers with Shakespearean quotes renew an interest in what, to many, is a grandmother’s pastime. Lia Cook’s weavings from a digitized candid photograph taken on a 1950’s-vintage camera is computerized into millions of pixels and woven together adding a contemporary feeling to the age-old art of tapestry in a grand scale. Wendy Huhn’s quilts portray personal stories through “a challenge of stereotypes from 18th and 19th century women’s magazines, and nostalgic retrospect on children’s paper dolls and story books.”

Wendy Huhn is not alone in her contemporary quilting, as is ably demonstrated by The Utah Museum of Fine Arts (UMFA) exhibit Quilts Rooted in Tradition: Art Quilts from the Rocky Mountain Quilt Museum, on display through Oct.15. As this exhibit shows, quilting has evolved from a utilitarian craft to a respected art form. Art quilts, unlike bed coverings, are generally designed with an “intent: a specific thought, idea, or message.” In Quilts Rooted in Tradition, 64 quilts showcase an assortment of movements in quilting from 1980 to the present. Some of these quilts move from traditional patterns to take on contemporary thought. Others portray a political message, as in Marta Amundson’s “The New Holocaust,” or “Desert Storm” by Terrie Hancock Mangat. “Desert Storm” is a commentary on war, oil, and America. It’s a wall-size work littered with skeletons, matchbox cars, gas pumps, and planes (or are they birds?) made of American flags. At the other end of the spectrum is “Shrine to the Prairie Chicken,” in which Betsy Cannon’s mission is to add a little whimsy to the world. As she states, “we spend too much time on the negative and need to focus on the silly things in life.” Whatever approach the artists take, their goal is to communicate a message through quilts. 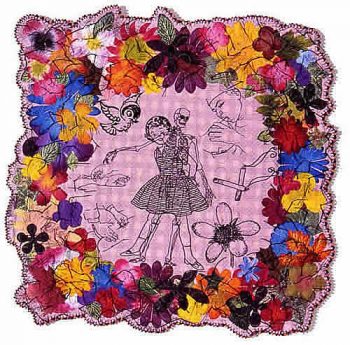 When did quilting cross the craft line? It began in 1976 during the Bicentennial when the quilting movement was revived. In 1979, when Jonathan Holstein curated an exhibit at the Whitney Museum of American Art of Amish quilts, the art world took note. Quilting no longer remained a women’s handicraft and men also joined the movement.

This movement continues at The Kimball Art Center in Park City, which is hosting three contemporary textile shows.* Material Matters: Art Quilts from Front Range Contemporary Quilters is on display in the Main Gallery through July 23. This juried exhibit consists of more than 40 quilts by members of the Front Range Contemporary Quilters. Like in painting, the subject matter in these pieces moves from representational — as in Melody Randol’s “Stone Tapestry” a detailed rendition of a Southwestern landscape — to the abstract — as in Elaine Spencer’s “Lichen Flowers,” which abstractly captures the feeling of lichen growing on a rock. Juror Alice Zrebiec’s comments on this exhibit provide an astute analysis of the art-making process of quilting. She writes, “Material does matter. Carefully chosen fabrics – selected from commercial goods or specially dyed or printed to create desired colors or effect – are pieced together or appliquéd. Artists further vitalize their compositions through complex manipulation of fabric pattern and by adding overprinting or embellishment. They create painterly effects by juxtaposing or layering fabrics of different opacities. Stitching is used not just for functional purposes such as joining one fabric shape to another, but it is also used imaginatively to create movement, dimension, texture, and decoration. Some artists push the boundaries even further and literally think ‘outside the box’ of the conventional quilt rectangle, creating shaped pieces that present their subject in a fresh manner.” 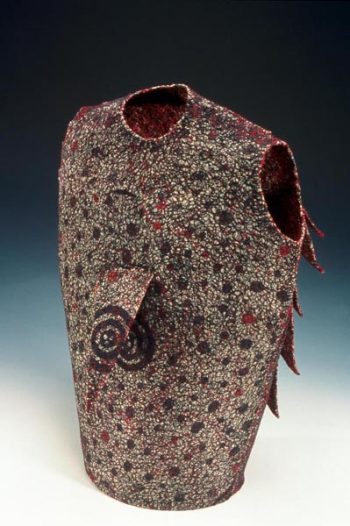 In the Kimball’s Garage Gallery, a related exhibit, Sheri Rice: Paper Quilts, hangs through July 31. Rice, a mixed-media artist, creates one-of-a-kind paper quilts by combining recycled and found materials in an interesting combination of collage and quilting. Like Robert Rauschenberg, who finds the “inherent usefulness and dignity of all materials,” Rice “creates art from the discards of others.” Her works are a collection of book pages, music sheets, obscure photographs and found materials stitched together as a whole.

Hanging concurrently is the third textile exhibit at the Kimball, Sheryl Haler: Textile Sojourns, in the downstairs Badami Gallery. Haler’s work explores earth, nature, myth, and ritual. Some works are small as in the shoe-like pieces; others are life-size installations of elaborate dresses with horns mounted on top. Metaphor, symbolism, and culture are explored in cloth. As the artists states, “They are talisman and sacred . . . They are mementos, tributes, discourse, and questions . . . They are a mapping of a life’s journey.” 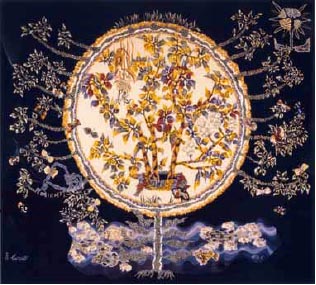 If, by visiting these exhibits in Park City and Salt Lake City, you’ve seen where fiber art is going, be sure to head to Provo to see where it all began. Tapestries: The Great 20th Century Modernists, on view at the Brigham Young University Museum of Art through July 24, presents modern painters and sculptors who were inspired to transfer to tapestry some of their masterpieces. The modernists’ re-examination and reinvigoration of the traditional art of making tapestries can be seen as a major influence on the current acceptance of textile art. “This exhibition is a fusion of new and old — the bold abstract designs of modernism and the ancient techniques of hand-woven tapestry,” says BYU Museum of Art Curator Paul Anderson. “And it is a surprisingly appealing combination. The simple geometries and pure colors of much modern art transfer readily to the loom, and the large scale and soft texture of tapestry give these designs a sense of drama, warmth, and richness.”

The resurgence of tapestry art has been credited to Jean Lurçat, a French surrealist painter, who developed a system in the 1930s that simplified the complicated process of weaving. Nineteen woven works in this exhibit represent not only Lurçat, but also Pablo Picasso, Alexander Calder, Jean Arp, Fernand Léger, Le Corbusier, Henri Matisse, Vassily Kandinsky, Victor Vasarely, Georges Braque and Marc Chagall as well. The MoA is one of only six American museums, and the only one in the western United States, to host this impressive group of tapestries culled from a dozen collections throughout Europe and America. 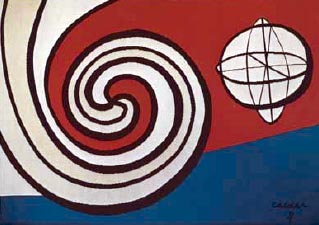 Whether by default or by design, the UMFA, Salt Lake Art Center, Kimball Art Center and BYU MoA have given Utahns a rare opportunity to examine an emerging and expanding genre of Contemporary art in detail and breadth. Whether you simply love quilts, have a passion for the modernist masters or are intrigued by what visual feats artists can achieve with fabrics, July is the month for anyone with an interest in textiles.