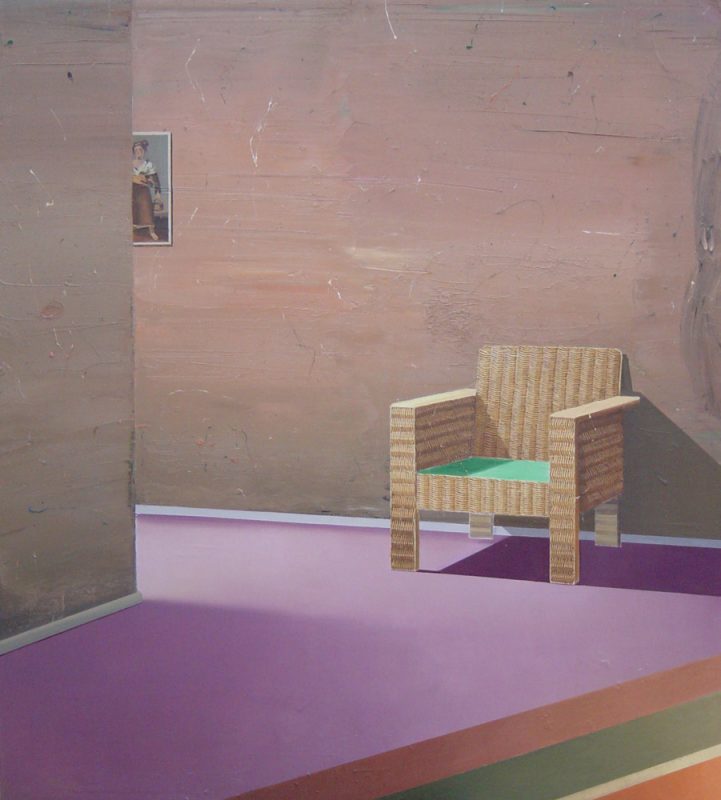 Beautifully articulated color combinations, carefully balanced compositions, credulous perspective, figural accuracy; all are to be found in the art of the Leipzig School, a group of artists trained at the Leipzig Art Academy whose works are now on display at the Salt Lake Art Center. The works in Life After Death, culled from the Rubell Family Collection and on exhibit through September 29, bear the stamp of the essence of this group, formed in 1990, one year after Leipzig was freed from behind the iron curtain. The works reveal the classical training that survived east of the wall, but are informed by an ironic assessment of the irrational in the contemporary world.

While a hallmark of the art of the Leipzig School is that it springs from an artistic tradition that stretches back for centuries, it may be seen as an overt reference to contemporary life in post-cold war Leipzig. After WWI, German Expressionists reacted to their situation with lavish abstractions, ostensibly conveying the chaos that had and was occurring. In a similar way, upon careful observation, the art of the Leipzig School may be seen as an ironic statement, fiercely ironic, on the situation in old Eastern Germany and East Germany today. Classically trained, all these artists share a common aesthetic that is anything but Classical in subject matter. By careful adherence to the “rules” of the Classical, these artists show the viewer how this tradition can be corrupted, as it has been in a society still dependant on it — from Greece, to the Declaration of Independence, till now. They reveal to us a myth, one in which we live, one which is not absolute.

The Greeks used the rational philosophy of life to create order in the universe, at least in regards to their concept of truth. Anything contrary to this, the conceptions of the mind contradicting nature, was considered irrational. Subsequent philosophers have made a study of Reason, notably Emanuel Kant, whose Critique of Pure Reason elucidates how the rational mind may be used for reason as opposed to venturing into the irrational. This tradition of the rational was the basis for the classical art training in the Western tradition, the tradition of which the Leipzig School finds themselves the uneasy heirs. Tilo Baumgärtel’s very potent, provocative work “Die Pause,” 2004 illustrates the School’s position. In Baumgärtel’s painting, the architecture and form is correct, rational, but all the figuration works against reason; everything is right and everything is wrong. This may be a thesis for the Leipzig school.

The first works encountered in this exhibit, in the Salt Lake Art Center’s Street Level Gallery, are the drawings, mostly untitled, of Matthias Weischer. They are a good introduction to many aspects of the School. In plasticity, they bear a certain paucity of form, simple line and frequent interruptions of full color. The “rules” are there. The elements are sound. They are rational works, in the Classical sense. But they are also disorderly. Many iconographic references are alluded to — pyramids, crosses, chairs and geometric patterns. These are within a melody of simplistic form and color. The images ‘ icons, settings, and colors have a psychological impact (as definitely do all the Leipzig School’s work) in relation to the subjective. These do not resonate as surreal, but leave a certain state of unease, a, subjective perception upon the viewer of disquiet. Like in a Piranese, we are lost in a labyrinth, a nightmare even, of uncertainty and anxiety.

Weischer brings us closer to the height of the Leipzig school in his large-scale paintings. His “Chair” |0| and “Zweiteilig,” |1| both painted in 2003, are apparently companion pieces. Both show a room with a hall leading obscurely away from the picture plane, with no human life other than two pin-ups, which may represent the human in this barren universe or the empty universe in the human. The other two paintings by Weischer are almost completely illogical, irrational as Kant might have noticed; they obey all the laws of the rational yet destroy any trace of reason to be found. These two compositions, “Tuch,” and “St Ludgerus,” are dense with iconographical images. But why are there legs sticking out from underneath the sofa? Why are there plants growing from the chandelier? Why do socks stand erect with no wearer? Why is a figure painted purely in white amidst darker colors? There is no sense in this, it is purely unreasonable; but that may be the purpose — to paint in the Classical tradition yet defy the rational.

Neo Rauch, the elder member of this group of artists and defacto leader of the Leipzig School, has gained international prestige, in large part due to the Rubell family, who made this traveling exhibition possible and whose showing at the Mass MoCA in Massachusetts attracted great appeal for the Leipzig School and Rauch in particular. Rauch takes his experiments farther than does any other member of the Leipzig School. His compositions and colors are as complex as a Botticelli, yet his work is as different to Botticelli as the twentieth century is to the fifteenth. In the work of Rauch logic is lost. Nothing can truly be entirely explained, or even attempted to be explained. It is in the unexplainable, the absence of reason used within proper states of artistic Classical form that the viewer may find beauty in these works. Perspective, color, harmony, composition, figuration- all work in the classical manner, such as in “Das Neue.”|2| At a glance this picture could have been a history painting in the Albertian sense of the word. But maybe it still is. All elements are there excepting one and that is cohesion. “Demos,” could have been an Ingres.|3| Unfortunately we live in the twenty first century and Rauch will receive no Prix-de-rome. These works are no surrealist fantasy, they are reality given over to the absurd.

The work of Christoph Ruckhäberle presents a quality much found in the Leipzig School. His figures generally do not look at one another and there is little or no connection between them. This is slightly disturbing as so many sitters are in such close proximity and are children. Each seems lost in its own sphere. Human connection was something Renaissance painters till Raphael sought for and now it is being broken. All are lost in their absurdities. With Rauch’s work as well as Ruckhäberle’s, one cannot explain their imagery other than that they cast doubt — not on structure or artistic form, but on truth, relationships, human interaction, and the loss of reason: subjective uncertainty.

In his polished, large-scale oils Tim Eitel paints beautifully his absurdities. He paints very attractive minimal landscapes with figures apparently lost without their sense of reason, doing irrational things, activities that are mind-numbing or acutely banal. In each grouping of two or three, such as “Verweis,” they seem lost in their own reality, but we follow, with no apparent conclusion other than the subject’s sense of obscurity

David Schnell has the final blow in the show. He displays his masterful use of perspective, yet it is we, vicariously walking through a tunnel, such as in “Bretter,” or a series of crates, witness around us everything being blown to bits.|4| The very world around is us lost to destruction. The beautifully articulated forms blow apart, everything is blasted before us, a perfect denouement to the show.

Is this “blast” another dose of German nihilism or does the Leipzig school have a positive ideology, a “warning” for the future as do so many great artists of today? Have the Leipzig School lost hope for the future or is there a constructive statement of the East German society being made? Is the Leipzig school making commentary on the world’s slipping grasp on the rational; on who we are, on our very society, which we are desperately trying to hold together? With the help of the Leipzig school and awareness such as this, possibly we can maintain this fragile society and those in East Germany will heed the Leipzig School’s warning, and others like the School will do their part to galvanize what we have not lost and put and end to the absurdities and a loss of reason which we seem to see every day. 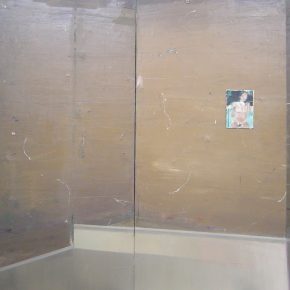 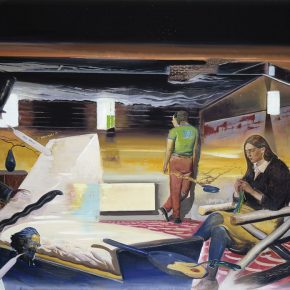 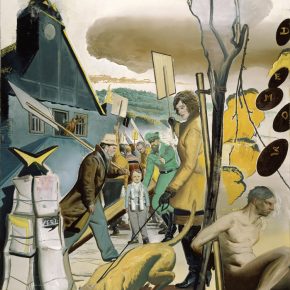 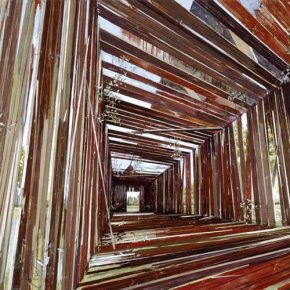