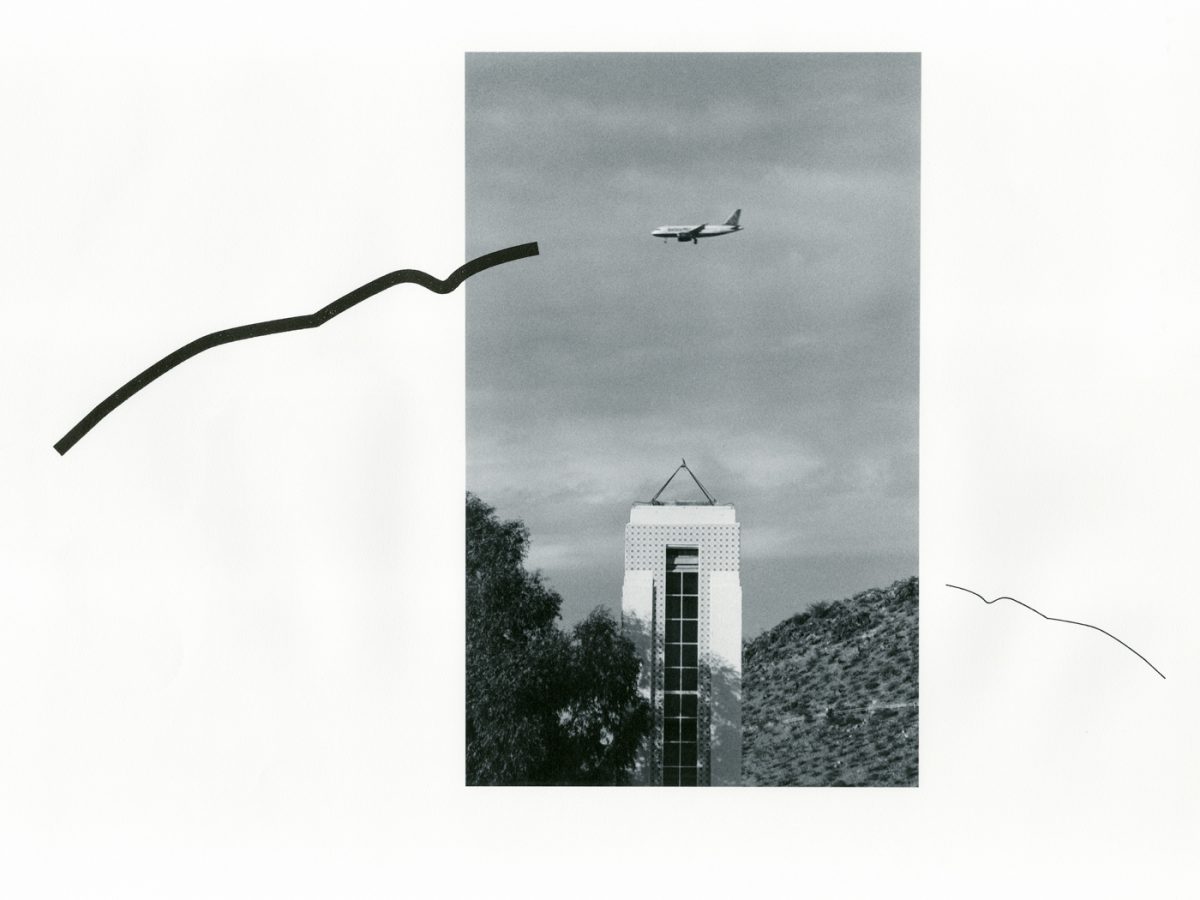 “Everyone leaves marks, both physically and emotionally,” says Lewis Crawford. The artist, who is featured in a group show now up at Finch Lane, uses this philosophy to guide a conceptually fluid assortment of visual experiments, or “constructs.”

Crawford’s works are simultaneously philosophical and simple—emphasizing the primal role of mark-making in art. The two-dimensional pieces combine images of urban and industrial landscapes with geometric forms. In “Construct No. 693” the shadow cast on a textured wall is reconstructed as a contour line drawing beneath the photograph, a process that relates the two images but also acts as a process of extraction. The lines Crawford expands upon can relate to the physical, like the contour of a hillside, projected outside the picture frame, or the immaterial, like the projected path of an airplane as it proceeds through and then past the picture frame.

Set atop bright print paper, the relationship between image and mark aesthetically maps the artist’s method and begs the viewer to ponder the relationship between landscape and abstract form. Visually, such geometric marks oscillate in their intensity by directly intersecting the image or balancing the composition by marking the otherwise vacant space beside the image. 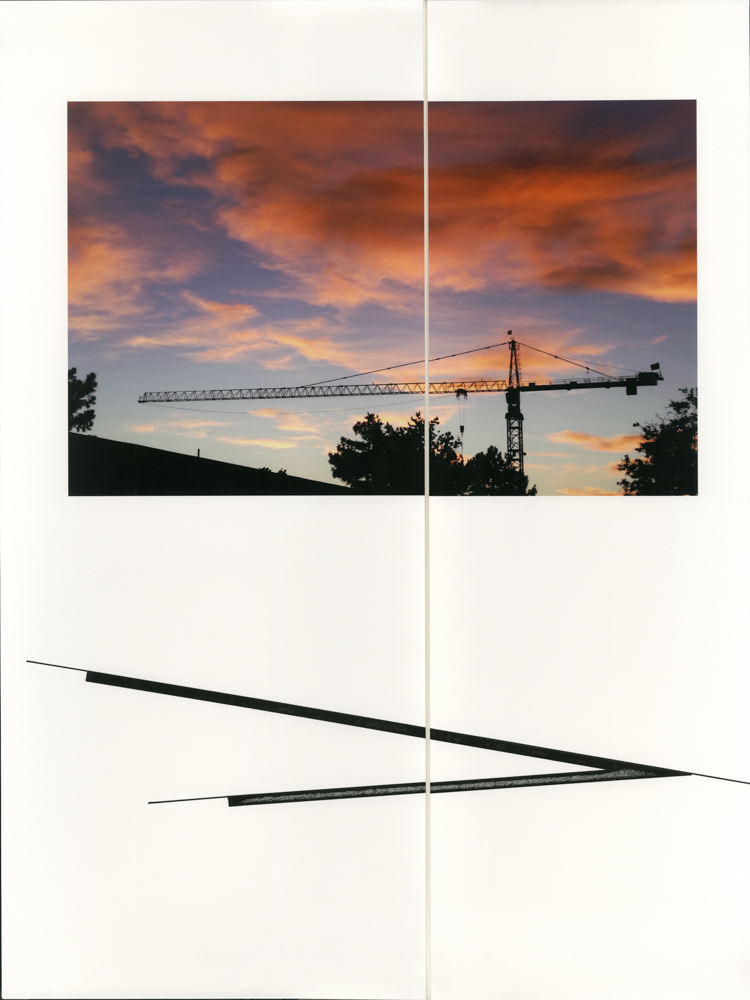 Here, an age-old interplay occurs between the starkness of the geometric mark and the thickly textured surface on which it is placed. Such works remind one of various art historical experiments, most notably Picasso’s Synthetic Cubism, which relished in the chemistry between form and space.  Similarly, Crawford’s “constructs” read as a summation of the artist’s intellectual journey, reading as more self-reflexive than viewer-oriented. “None of these marks would be here unless someone made the landscape for them to inhabit. I document these urban landscapes. I mix media and marks. I see stories in these marks,” says Crawford.

Crawford replicates, extends and transforms the marks he finds in the landscape, but he also creates new marks and symmetries as he continues his formal explorations. When in “Construct No. M15-6-17” he slices through the image of a construction crane against an evening sky and separates the two images by a very small gap, he creates two new compositions with dynamics very different from the original. In “Construct No. 1272” he keeps the spliced images adjacent, but shifts one up slightly, breaking the perfect circle that appears in the white space at the top of the frame. It is similar to the seismic shifts that create lines in the natural world as well. 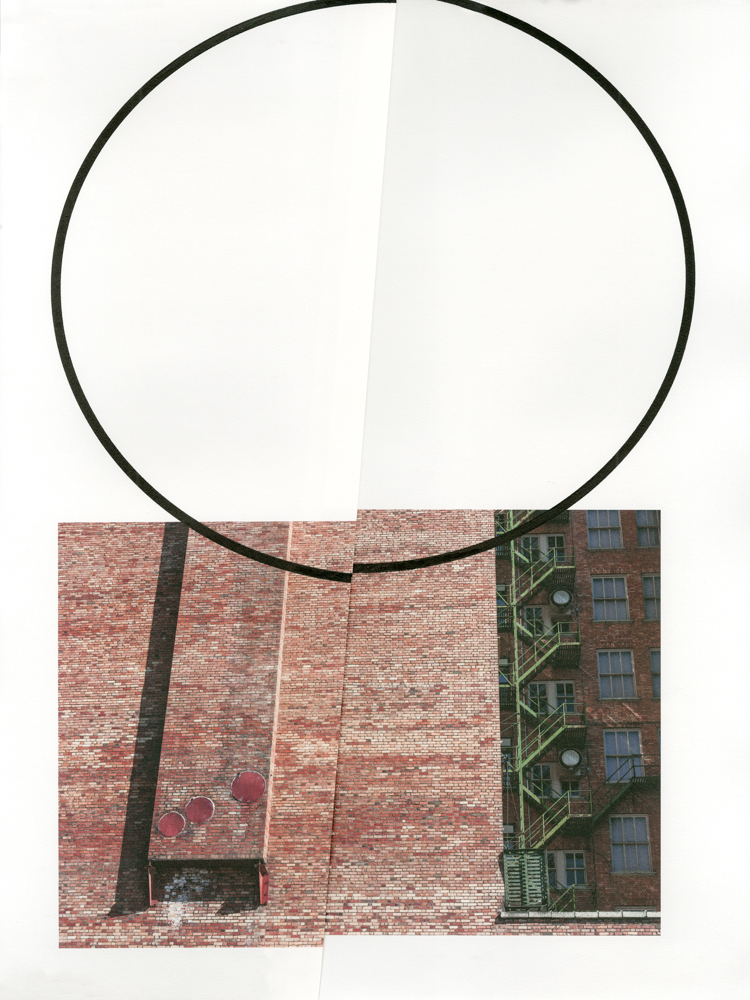 In all its vastness and frailty, the landscape has become a permanent fixture in Utah art. Indelibly drawn to the land’s many contradictions, local artists have augmented, critiqued and defined the visual legacy bestowed by the Land Artists of the ‘60s and ‘70s. To Crawford, his work exists as “an examination into the reassignment of marks found in humanmade landscapes.” This inquiry finds conceptual companionship among the work of Land Art titan Robert Smithson, whose process rejected the picturesque in favor of the intrusive emblems of human intervention. Smithson’s early work in his hometown of Passaic, New Jersey, looked to abandoned industrial sites as the ultimate embodiment of humankind, much more so than the artificially manicured parks for which many place their admiration.

In the individual works, Crawford’s lines are meant to emphasize the continuity of space and the mental constructs that continue outside the artist-imposed frame of an image. For this show, Crawford requested that the works be hung in specific pairings, so as to allow geometric forms to flow from one work to another, expanding his original conceit across the entire gallery. These groups evoke an enthusiasm for the simple delights of form and shape, principles that underlie the artistic process and are so often masked by narrative.

Crawford has maintained a longstanding interest in marks existing within human-engineered landscapes. Originally from Prescott, Arizona, he currently works as an assistant professor of art at the University of Utah and an adjunct instructor at Westminster College. As a photographer he has captured the geometric forms existing within many local public spaces. His process seems uniquely suited to finding the beautiful in the banal, capturing that which we may discover if we spared but a moment to observe. 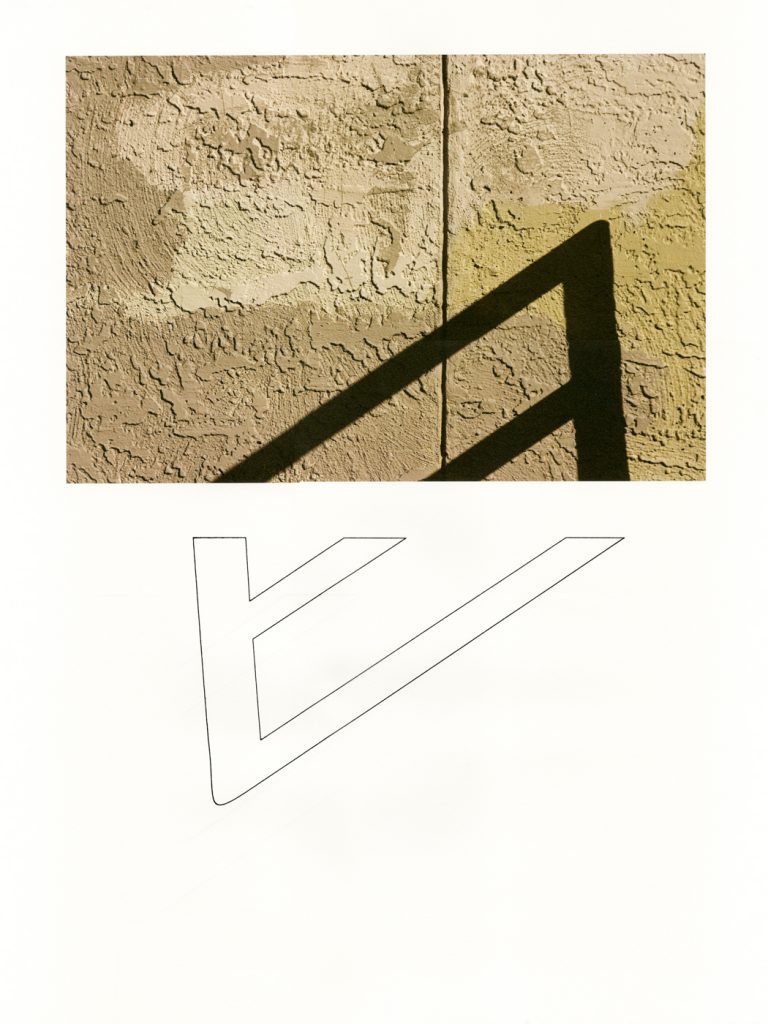