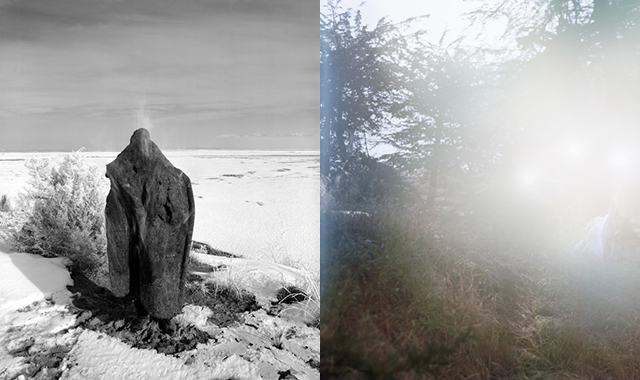 As spring rushes into summer in Utah, the time spent out of doors each day has increased exponentially: we want to be surrounded by bright light, warm air, and beautiful landscapes. Utah offers an abundance of varied, even verdant environments we can inhabit and enjoy. Solitude can be found in these spaces, but more often than not, the space and land we visit is also sought by others.

Our place within landscape provides the common narrative in the exceptionally well-paired exhibitions currently on view at CUAC in downtown Salt Lake City: Levi Jackson: Don’t Force It, Son, in the front of the gallery, and Josh Winegar: Rapture in the back. Both photographers employ landscape as their chosen genre, yet they present divergent messages through the use of color, photographic process, and human intervention as it takes place within each work.

Jackson’s large format black and white photographs are shot using a 4×5 camera. His formal compositions are strikingly simple: each intervention created on the land is positioned through his lens to its best advantage. Utah’s various landscapes are both backdrop and subject, giving ample space to the actions Jackson has created then photographed. Here the Dust Cover series (2013) includes three photographs, each of which shows a single figure wrapped head to foot. In “Dust Cover – Fire”|1| the figure is wrapped in a fireproof blanket that has been set on fire; “Dust Cover – Net” |2|presents the figure covered in rubber military camouflage material; “Dust Cover – Silver”|3| depicts the same figure wrapped in a mylar emergency blanket. Each figure is Jackson himself (photographed with the aid of his brother), but, wrapped to the point of anonymity he stands in for everyman, an unidentified person in an unidentified, uninhabited landscape. When the locations of each shot are revealed – near Alliant Techsystems (ATK) in Tooele, a cattle ranch in Ibex, a Beryllium mine near Delta – it becomes clear Jackson is, through his interventions, positioning himself within Utah’s historical use of landscape, calling out singular places and events.

The relational experience of how Euro-Americans have impacted the land since the Westward Expansion of the 1800s is one theme permeating Jackson’s pieces. In a discussion of his work, Jackson stated that he is also interested in “commenting on the current human, land and religious relationship; stewardship.” Religion and stewardship intermingle in “Burning Bush-Pallete” from 2012. Devoid of any human presence, a wooden shipping pallet has been placed on one edge and lit on fire. The stark landscapes of Utah’s cracked desert floor, with black mountains rimming the background, make for an ominous warning, signaling the solitude of destructive forces through the neglect of proper stewardship.

Jackson is also interested in the history of art, and positions himself within a lineage of artists who have seen and used the land as backdrop if not singular material for their work. His photographic documentation of interventions in the landscape call to mind the Land art movement, in which photographs were used to capture the artists’ often fleeting events for posterity, and became works of art in their own right. Though several photographs by Jackson signal the influence of artists of a former generation, his work doesn’t feel borrowed but offers a new interpretation about our place within the land. “Detonation Tower” from 2012 is one great example.|4| Two images of the same tower, located eighty miles from the Nevada border, are hung side by side. In the left image the tower is centrally framed in a flat landscape, a sloping hill off in the far distance. The right image is the same tower, now with each rung of the tower’s front surface covered with a white fluorescent light. The artist Dan Flavin’s masterful use of fluorescent lights to create charged works and environments comes to mind, yet Jackson adds the context of nuclear experimentation to his work. The white light becomes symbolic of the ability to see within a formal system, and at the same time, a force of destruction.

“Backslide” from 2012 evokes images of Robert Smithson’s actions from the late 1960s, when he poured various materials from hilltops to enact the entropic process of order moving to disorder.|5|Themes of time, scale, impact, and memory intermingled in each “flow” work. Jackson’s nod to Smithson was created through a much less permanent action. “Backslide” was shot in an irrigation ditch only ten feet tall, yet the ditch appears much grander in size and scale. Three shiny metallic strips flowing down the side of the ditch imbue the work with mystery. Why were they placed there? More importantly, could each of the strips be removed (the answer is yes), so the land could revert back to its “original” state? Jackson’s interest in Smithson goes only so far, as he finds Smithson’s use of heavy machinery and irreparable interventions too heavy handed. Jackson’s interest in action and memory is one more aligned with the tenants of Burning Man, where it is expected that as we inhabit the land, we leave no trace.

The trace of memory and the absence of our embodiment on the land are also central themes in Winegar’s photographs. These are also large format film images, shot with a 4×5 view camera, but they are in color. Moving through CUAC’s gallery space, we see in Jackson the staged evidence of our impact; in Winegar’s work, we witness the opposite, an erasure of the evidence of people and the built environment on the land, finding instead lush, verdant scenes that pulse with flashes of white light.

Winegar has traveled throughout the west, to Montana, Wyoming, Washington and Oregon, constructing a body of work that follows the lineage of traditional photography of the western United States. The historical precedent is of course the early American photographers who were sent “out West” to capture images of the vast terrain during the aforementioned Westward Expansion. The relationship between photographic documents of the untamed, unaltered land and the way the lands were then apportioned and used by Euro-Americans continues to be mined by contemporary artists: in Winegar’s series, to great effect.

The CUAC exhibition features six photographs: one from Washington;|6| four from California; one from Utah.|7| While each photograph presents us with a landscape that appears uninhabited, it is that way only through the process Winegar uses to erase humanity’s evidence. After shooting out of doors Winegar moves his negative into the studio where he plots the negative to create another exposure over the first, obliterating people, structures, and buildings by the overlay of a burst of light. Where once the image showed evidence of people and their fabricated creations, Winegar erases them in a particular form of “rapture.”|8| We were on the land and we altered the land, yet evidence of our place has been removed, with light becoming the signal of removal. Of course, light is needed in the first place to create the photograph, thus light embodies both process and erasure. Winegar uses mechanical means to present a landscape devoid of human and/or mechanical constructs; a hyper real landscape that is in fact not real at all.

Winegar’s work engages both romantic and sublime aesthetic ideas. The tradition of romantic landscape painting and photography was also a product of the 1800s, as Europeans sought views (either real or imagined) that lent an air of heightened emotional resonance. The extreme of these views were those experiences and landscapes termed sublime – the views and vantage points that produced awe, astonishment, even fear within us. At first take Winegar’s images feel more supernatural: the white lights glow as if benevolent beings populate the forests and trees. But learning of his photographic process of erasure, of the reference to “Rapture” and what is taken away, lifted up through the air, gives the works a more ominous air. The glowing lights could be the aftereffect of what may come if everything on the planet besides the trees is taken away. Winegar’s environments somehow feel more hopeful, though, as each one affirms (let there be) light. With each light pulse indicating human activity and intervention, although hidden, we are still here and continue to make marks on the land.

Through the process of light, both Winegar and Jackson direct our gaze to embodied landscapes where human forms are cloaked or only implied. Both artists encompass the history of the western United States and the cultural ideas that formed how we now view the environment and its stewardship. Through different interpretations of several shared themes, each artist’s work is singular, yet paired in this exhibition they make for an intellectually compelling view of contemporary photography.

Levi Jackson: Don’t Force It, Son, and Josh Winegar: Rapture are at the CUAC through June 15.