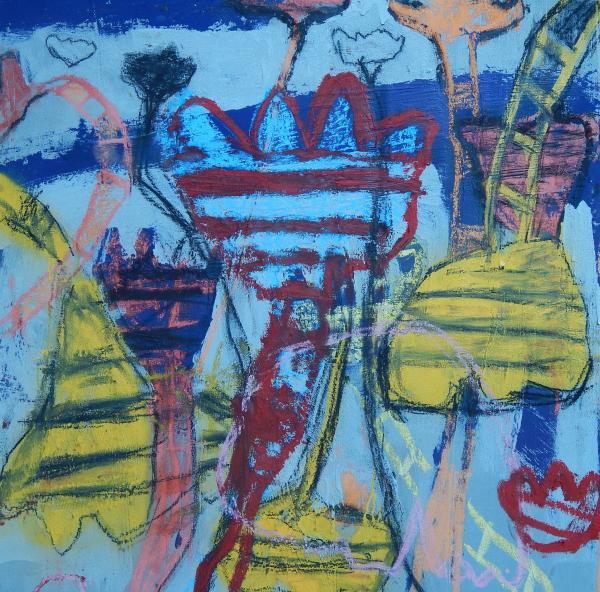 In a 2012 show at Finch Lane Gallery, Layne Meacham displayed a series of large canvases that read as sizable bodies of cement, each with large, yellow, painted stripes, and black spots resembling old chewing gum to render the effect of a literary view of a city street complete. For his current show at the Gallery at Library Square, Meacham has returned to his cement look, but has shifted his gaze to sidewalks, where he evokes the spontaneity of children’s drawings rendered in chalk.

In his artist statement, Meacham quotes both Picasso and Dubuffet about the advantages to artists of mimicking children and the freedom to think, act, and become like a child, without imposed rules or inhibitions. Meacham has accomplished this very same creative impulse, with large-scale replications of side-walks, on which he has become invested in the subject of juvenile mapping, with an uninhibited candor and seriousness, having thought, acted and become as a child.

In these works the cement-like layering is thickly adhered, leaving much texture on the canvas, while other areas are often left entirely unapplied. The paint and chalk used develop ridges and surface texture on the canvas, creating a believable illusion of a piece of sidewalk hung on the wall. There is no aim in these works of convincing or instruction, only of psychological experimentation, of tapping into the playfulness of childhood, creating naive works that are raw, energetic, and bewildering.

Chalk on the Sidewalk: Works by Layne Meacham is at the Gallery at Library Square through September 25.