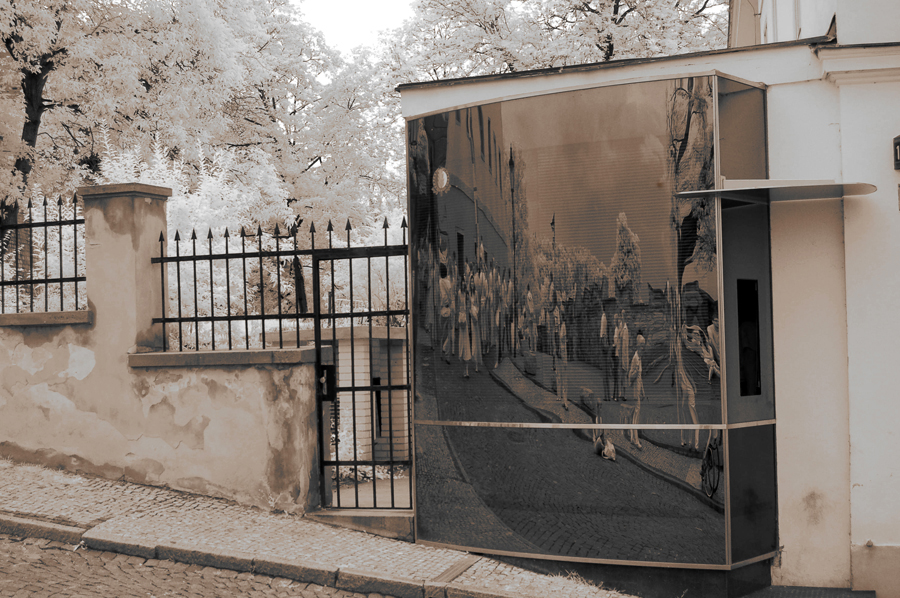 Laurel Casjens is an unabashed tourist. The photographs in her exhibit at Finch Lane Gallery are, for the most part, landscapes or architectural subjects, but they were not taken with the calculated precision which characterizes most landscape or architectural photographers. Instead, the images were all taken on the move, on family trips with husband, grown children, various girl and boy friends all in train. Indeed Casjens says that being with her family is part of the process. The resulting aesthetic is more closely akin to that of street photography, where the photographer makes images from what is presented to her rather than trying to create an image by positioning herself in the landscape, setting up the camera, waiting for the light. The images do not, however, have the studiedly abrupt cropping one associates with “snapshots as art” or the “caught in time” feeling of the decisive moment. Instead, they are more like the travel photos most of us take, made with as much care as the situation permits at the time.

A unique aspect of this selection of Casjens’ photos is that they are all made with a specially converted digital infrared camera. (If you get the idea you want to look into the conversion process for your own camera, it’s done by a company called Life Pixel). Essentially, this means that the visible light that Casjens sees is not the light that is making the image in the camera. And since the raw infrared image is a red tinted monochrome, the camera’s display can be used only for checking composition, not for previewing the actual tones in the finished image. The two most obvious differences between an ordinary black and white photo and an infrared black and white photo is that the sky is dramatically darkened, making the clouds stand out, and anything green, such as vegetation is made strikingly lighter, seeming to glow. Since there is no film involved, digital infrared photos lack the grainy look of images made with infrared film. One could add digital grain, which Casjens has not. Interestingly, Casjens had never experimented with infrared until she got her digital camera converted. It was a desire to look at the world in a different way and to portray what is literally not visible to the naked eye that led her to make what she describes as a leap of faith and send in her camera for conversion.

Although all of the images exhibited at Finch Lane are infrared, not all of them have the distinctive look of glowing foliage and dramatic cloudscapes. “Climbing the Pyramid, Calakmul,” |1|Mexico is an image that makes use of infrared to good advantage. Here, the glowing trees outshine the clouds, and what would be the blue of the sky is as deep in tone as all but the darkest shadows in the trees and pyramid.

In these new digital prints, Casjens has duplicated the colors of the unpredictable split toning which she has used in her silver gelatin prints for years. In a traditional black and white photo, the shades of gray are formed from different densities of silver. The toning process replaces part of the silver with another metal – usually copper, selenium, or gold – with the result that the color of the print changes. Split toning involves immersing the print in first one and then another toning bath, which results in beautiful but unpredictable and difficult to control results. Casjens says that she would usually make ten prints of an image from which, after toning, she would be pleased to keep one or two successes. With digital processing, once she has achieved the look she wants, the image is reproducible. The trade off is that the result is no longer a unique object, but for Casjens, the ability to control the process more than compensates for the loss of uniqueness. One particularly successful example of the toning effect is “Plaza and El Castillo, Chitzen Itza, Mexico.” Toning often affects the image contrast, and in this image, Casjens has manipulated the midtones to produce an eclipse-like light in the plaza while the brilliant sky is full of fluffy cumulus. The colors vary from print to print through different shades of copper and sepia, occasionally veering off towards blue or purple. The only toning artifact, which is not reproduced, is the iridescent metallic reflective tinge that is sometimes visible on toned silver prints viewed from a low angle. 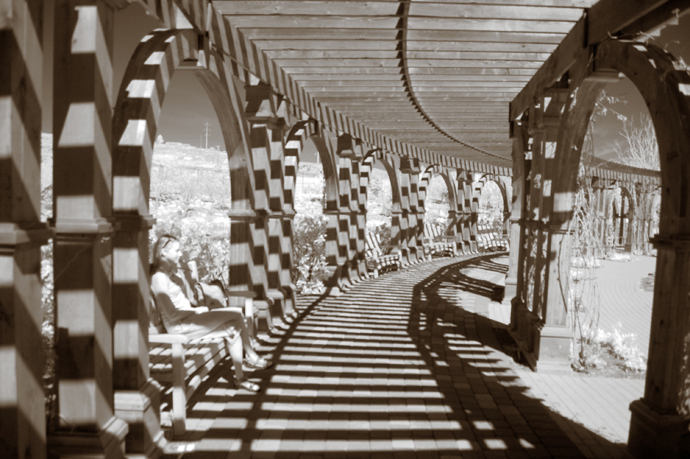 The subject of this exhibit is really not the places portrayed in the images themselves but, rather, the act of tourism. Casjens sees tourism as a positive activity, which has the potential to be a unifying force among people of different types. On a local level, she feels that when people get to experience first hand the more scenic and out of the way places in their own country, they will be more motivated to want to preserve those sites for the future. She says she notices an increase, in countries other than the United States, of intra-country tourism – Mexicans seeing Mexico, Moroccans seeing Morocco. Casjens also feels that international tourism acts to promote increased understanding of other cultures, making those who participate in it less xenophobic when they return home. She wants to communicate that no matter where we are, as people we have more things in common, drawing us together, than differences dividing us. The tourism that Casjens is talking about is a bit more off the beaten track than one might think of at first. She likens it to going to a national park, but then going off on a backcountry trail. The objective, however, is not to get totally away from people. If you look closely, there is a person or automobile in each image. With the exception of a couple of images, which include family members, these are other tourists who just happened to be there at the time. “Castle Ramparts, Prague” is a wonderful example of all of these elements coming together just right. The tourists have (in a positive way) the choreographed look of a crowd scene in a film that seems to be being directed by the limbs of the trees. The infrared glowing leaves and contrast bending toning combine to create a beautiful but unearthly light which transforms what could easily seem banal and annoying (too many people spoil the view) by changing the viewer’s attitude so that the people become the view.

The results of Casjens’ approach are not uniformly successful, though. When we make our own travel snaps, we say, “This one came out well,” or, “That one didn’t come out,” as if the images themselves had a role in deciding whether to reveal themselves to us. For many, a successful photograph is a result of fortuitous coincidence, and part of becoming an accomplished photographer is learning to control the processes involved so as to bring a more consistent result. Casjens’ choice to proceed as a tourist has the result of consciously reintroducing this element of serendipity and some of the images just “come out” better than others. For instance, her image “Alta Kapelle, Regensburg, Germany” recalls Frederick Evans’ platinum prints of Gloucester Cathedral in its luminosity as light floods through the clerestory windows. The digital toning has the “wow, that just happened” look of successful split toning. By contrast, “St. Peter’s Cathedral, Regensburg, Germany,” though a quietly beautiful symmetric image, looks a bit drab beside its companion. In this context, though we are assured by Casjens’ evident mastery of her medium, we are tempted to say that the one “came out” better than the other.

Laurel Casjens’ photographs remain on display at Finch Lane Gallery until February 22nd. Also on exhibit in the gallery are sketches and paintings by Joe Jacoby, and in the Park Gallery, Voices an exhibit by the students of the Visual Art Institute in Salt Lake. Finch Lane & Park Galleries hours are Monday through Friday, 9:00 a.m. to 5:00 p.m. and during monthly Gallery Strolls.

This Article is from the February 2008 Edition of 15 Bytes