In a postscript to an email I sent, in my capacity as editor, to the staff of 15 Bytes at the beginning of this year, I mentioned that my email responses — never arriving at a whiplash pace — might, for a while, be slower than normal: during the winter months, I explained, I moonlight (if one can use that term for a job one does in the day) a few days a week as a ski instructor at Snowbird. I was up there this Sunday, teaching a 7-year-old beginner, when — and this was a coincidence that only really occurred to me days later— my two jobs crossed paths. 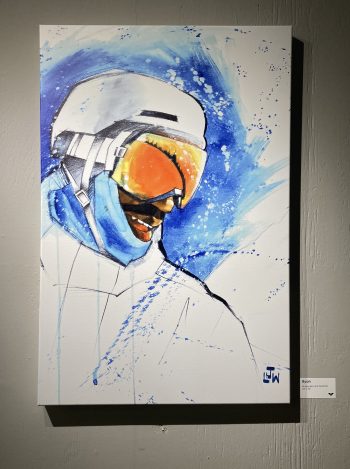 This portrait of one of Snowbird’s sponsored athletes attracted the attention of one young skier.

We were inside taking a hydration break when my protégé said to me, in passing, “That looks like my father.” He said it with a slight Spanish accent: though raised in New York City, he was born in the Dominican Republic. He was referring to one of several paintings that have been hanging all season in a small alcove on the second floor of the resort’s Snowbird Center. There isn’t much to notice, resemblance-wise, in this portrait — it’s mostly line work against a white background, with a few dashes of color — bright blue on the buff and a fiery orange on the goggles. The only part of the face visible is a bit of nose, a mustache, and a mouth — which is agape with joy. One thing that might stand out, to you and me, though: the subject in this portrait is a person of color.

Unless it’s a warm, bluebird day, you’re not going to see skin color much on the slopes: as in this portrait, most body parts are covered in jackets and gloves and buffs and goggles. But inside, or on a shuttle bus, or riding next to someone on the lift, if you take the time to notice, it may occur to you: most of these people are white. Like, the vast majority.

In 2019, Snowsports Industries America (SIA) reported that African-Americans make up only 7.3 percent of skiers in the United States (while they make up 14% of the U.S. population). The Salt Lake Tribune reported that in 2019-20, 87% of visits to U.S. ski areas and 88% in Utah were made by people who identify as white or caucasian. In other words, on our slopes, people of color stand out.

Lamont Joseph White knows this from personal experience. Snowsports weren’t even on the radar in his early years when he was growing up, a Black kid in Queens; but when he moved to suburban New Jersey, he became intrigued by the elements of ski and snowboarding culture he noticed among his peers. It wasn’t until college, however, that he had a chance to get on the slopes. He jumped at it, and has jumped at opportunities ever since. He began coming west for his turns in the early part of the century (his wife has family in Utah), and in 2012 made it permanent when the couple bought a home in Park City — where, on any given day, White might be the only Black person on the slopes. According to Ski Utah, Blacks and Native Americans make up only 1% of skier visits in Utah (Asian and Pacific Islanders make up 4%, and Latinos, even though they represent 14.4% of Utah’s population, are just 5% of ski resort clientele).

In addition to being a passionate snowboarder, White is also an artist. He studied at New York’s Fashion Institute of Technology, The School of Visual Arts and the New School before embarking on a career in illustration that included work for Adidas, Converse, Coleman, Fairchild Publications, Ebony Man, Cole Haan, and more. He continues to work in illustration, graphic design and product development but has branched out with personal work and fine art exhibitions. 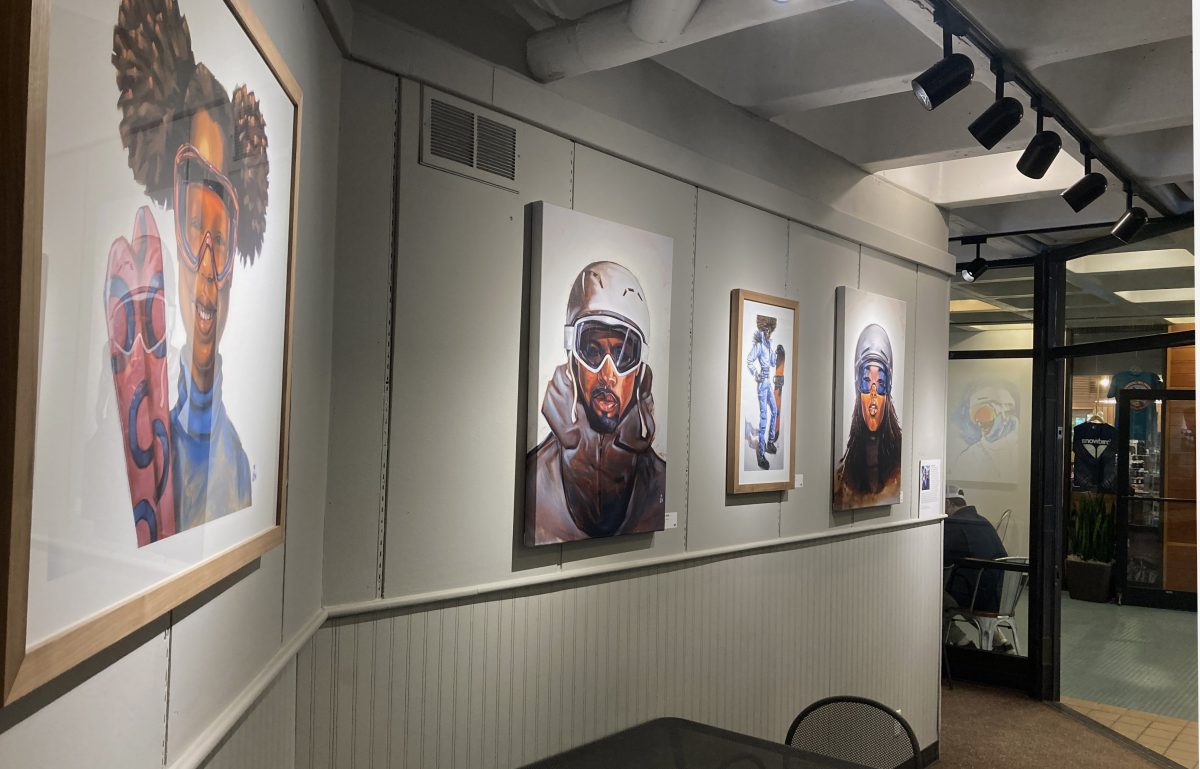 “Skiing in Color” celebrates skiers and snowboarders of color all ages.

Skiing in Color, a group of oil paintings White began exhibiting in 2020, is a more personal project, one that we might say is 30 years in the making — from that first time White strapped on a snowboard and slid across snow. It is driven by White’s desire to imagine and to represent Black people on the slopes. The first paintings in the series were a group of portraits of Black heroes like Martin Luther King, Rosa Parks, Harriet Tubman and Frederick Douglas wearing ski goggles. The group of paintings has that odd, slightly disconcerting juxtaposition that we find in steampunk, as White imagines the heroes of his culture and history becoming part of the sport he loves.

In the series of paintings on exhibit at Snowbird, his effort at representation comes more down to earth. Bright with color and brimming with energy, the paintings represent an inclusive vision for snowsports. In “Color Coordinated” a young skier expresses the pure, simple, expectant joy I see in many of the kids who arrive in buses for Snowbird’s local after-school programs. “Black Diamond” might be that same girl a decade later, an accomplished skier, ready to rip down the steeps. Difference, as represented by various hairstyles or gear, is celebrated. The people in these images are not tentative, they belong. The slopes, for them, are a place of joy, camaraderie, meditation, exhilaration. 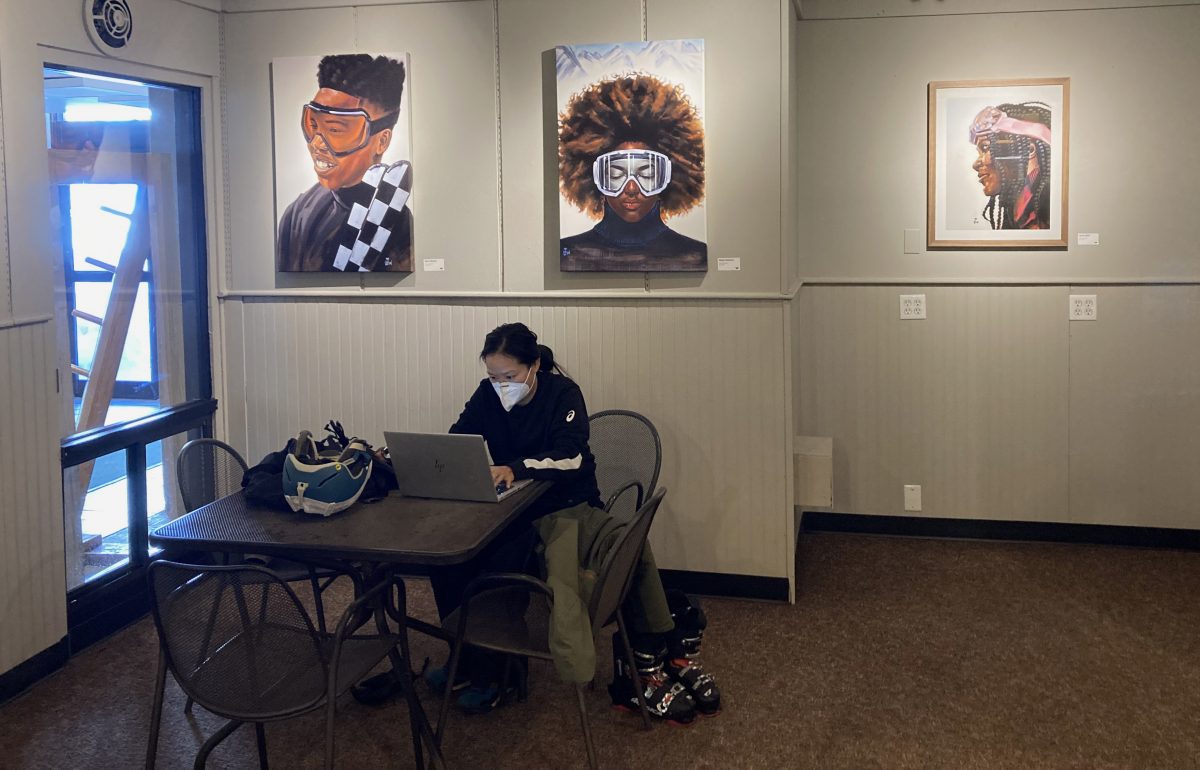 Surrounded by paintings by Lamont Joseph White, a patron takes a break from skiing at Snowbird to respond to some emails.

Though a small space, the gallery is located at the center of the Snowbird Center, between the bathrooms and the stairs, the coffee shop and the lounge, the lockers and Mountain School’s rental shop: it’s a high traffic area (where no lift pass is required). Hundreds of people pass it every day. Many of those will recognize that the exhibit comes amidst a national racial reckoning; that it’s one of many exhibits by people of color in a place where just a few years ago there were few; some might cynically dismiss it as corporate PR.

My 7-year-old protégé was oblivious to all that. He just saw an image of someone in snow gear who looked familiar.

The Snowbird Center is accessible from all entries to Snowbird resort and free parking is available. You can learn more about Lamont Joseph White and view more of his work at lamontjosephwhite.com.