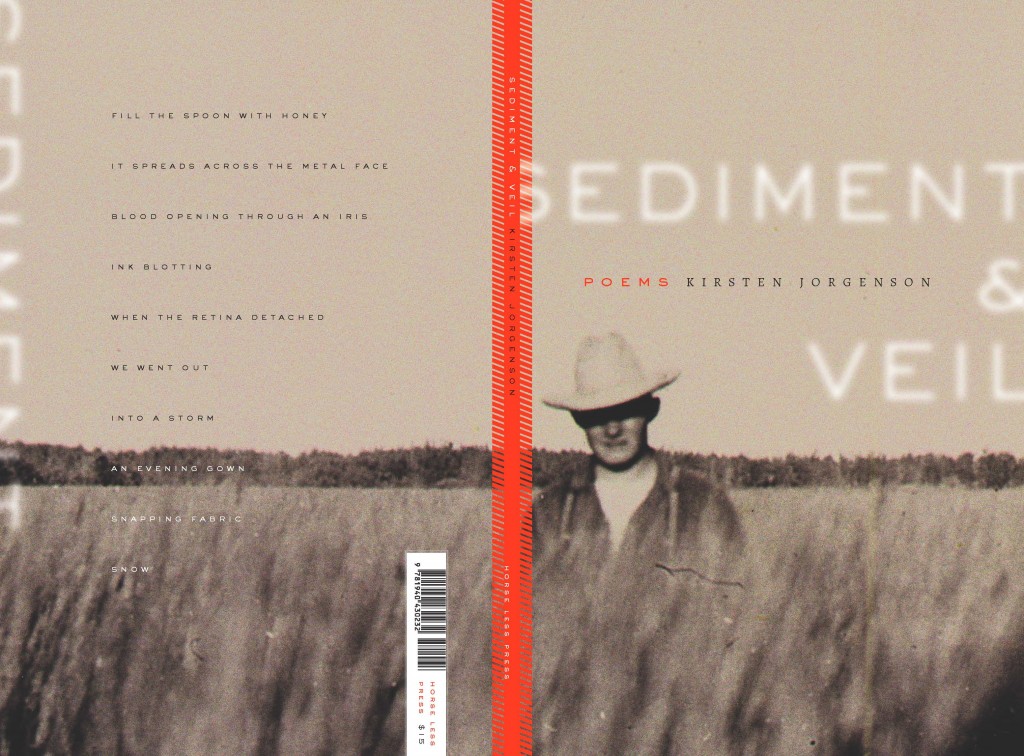 The ”Sediment” in the title of this book of poems is radioactive dust blown downwind from nuclear explosions at the Nevada Test Site; the “Veil” is a Mormon symbol that represents the separation between God and man, but also, according to the LDS.org website, “a God-given forgetfulness that blocks people’s memories of the premortal existence.” The juxtaposition of these two themes occurs about the middle of the book in a short, not-quite-haiku superimposed over a topographic map of a nuclear bomb crater: written into darkness/a curtain/ veil/ to be pulled through or not. These poems are full of ghosts.

Jorgenson earned an MA in British and American Literature from the University of Utah and many of her poems are loaded with Utah iconography: honeybees; seagulls; Sharp shinned Zion; old Christmas trees/planted in the salt flats; This is the Place; a promised land… The language is minimalist, extra verbiage stripped away so that in some poems little is left but a language map of some particular scene: haze of brine flies/ breaking along the shore/ chemical weapons incinerator/ where the water evaporates. If you are from Utah and inclined to visit the bleakly beautiful landscapes of the Great Basin those few words are enough—you know exactly where that place is. But perhaps there is a bit too much blank space? I know how I feel about brine files — childhood memories of running along the shore watching a black carpet of flies part under my feet — but how does the poet feel about brine flies? What does it mean to place them in the same landscape as a chemical weapons incinerator?

Many of these poems first appeared in various literary journals and also in two chapbooks, Deseret (2011) and Accidents of Distance (2012) (which was issued with a cover showing a downwinder map of radioactive fallout from the Nevada Test Site). However, they have been reworked, tightened up from the originally published versions and they are presented here without titles which gives the impression of one long continuous poem, as if the previous works were always meant to be part of a larger vision. For the most part this tactic works since the poems are stylistically similar with train-of-thought imagery and lots of contemplative blank space. However, the lack of guideposts is occasionally jarring. For instance, the poet writes, There were too many mosquitoes in Yellow Knife, and wait a minute, how did we get to the Northwest Territories? Weren’t we just in Utah?

Nonetheless, I kept reading and re-reading these poems with their stratigraphic layers of natural history, history, and culture, riddled here and there with bomb-crater maps and overlain with a skiff of radioactive fallout. In part I liked trying to follow the clues and fill in the blank spaces to reconstruct a familiar Utah landscape, like working a crossword puzzle. But on a deeper level the poems keep searching for places where the veil is thin, and that’s an intriguing place to go.