(This posting by Frank McEntire is excerpted from his article, “Kenvin Lyman: Jammin’ Over the Rainbow,” coming in the March issue of 15 Bytes and on his website at www.frankmcentire.com) 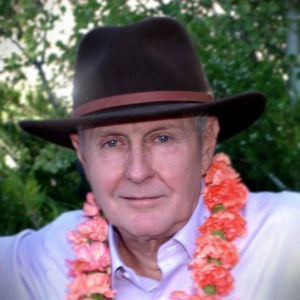 Art is the honey of human experience
gathered on the wings of sacrifice and hard work.

When the Jerry Abrams Headlights light show came to Salt Lake City with Buffalo Springfield in 1968 the crew stayed in the home of junior high school teacher Kenvin Lyman. Their host subsequently came to view the light show as an alternative art form, one that ignited his “high creative metabolism,” he said of this dynamic media that could combine his interests in science and art.

Rainbow Jam’s work with the light show led Lyman and Taylor into forefront development and use of computer graphics where they made “discoveries and systematic applications of optical effects and backlighting.” The “left-brain science” of computer graphics, Lyman said, came out of the university environment, with substantive contributions from the University of Utah and supporting software innovations at Evans & Sutherland. “These associations helped inform the technical aspects of our work and eventually became part of the molecular structure of computer graphics.”

Taylor moved to Los Angeles in 1971, eventually working with Robert Abel and Associates, one of the most influential studios in the visual effects industry. Many of Rainbow Jam’s innovations, especially those using primary light techniques (laser swords in the first Star Wars, for example), were quickly adopted by Abel and his team.

Lyman stayed in Utah and formed Dazzleland Studios, which served a prestigious international clientele producing a vast business portfolio of television commercials, feature films, posters, and covers for albums, compact discs, magazines, and books. He continued to produce commercial and independent work until his death at the age of 68 on February 6, 2011, the result of a fall at his home in Salt Lake City’s Avenues.

In the late 1980s, Lyman moved to Missouri to direct the Computer Graphics Center at the Kansas City Art Institute, where he taught advanced animation, illustration, and experimental imaging. He also collaborated with performance artist John Cage—on stage and in the kitchen as Cage’s personal chef.

Lyman was an expert chef, an innovator and a champion re-inventor of Utah family heritage dishes. Since 1998, Lyman has worked on a cookbook that was about ready for publication at his death. The manuscript features 200 manipulated photographic illustrations interwoven with family background and 120 kitchen-tested recipes (see www.theutahkid.com).

As a musician, Lyman was in the final phases of a CD by his UK2 Band, a work made “from scratch—original with deep American roots.” For more information about the band, click here.

Lyman, as noted in his obituary, “was a true renaissance man; a light show artist, commercial illustrator, singer/songwriter as The Utah Kid, commercial organic farmer and cookbook author. A man of many accomplishments he was, in the end, content to call himself a bohemian; a generous and free spirit who nevertheless gave much to his friends and the world.”

As we were preparing this post for publication we came across two profiles – here and here – of the deceased artist in the Salt Lake Tribune. Our March edition will contain a full profile of the artist.

Frank McEntire, former executive director of the Utah Arts Council, is a sculptor, independent curator, and arts administrator and was the art critic for The Salt Lake Tribune and Salt Lake City magazine.