KEN SANDERS TO SPEAK ON EDWARD ABBEY AND THE ENVIRONMENTAL MOVEMENT 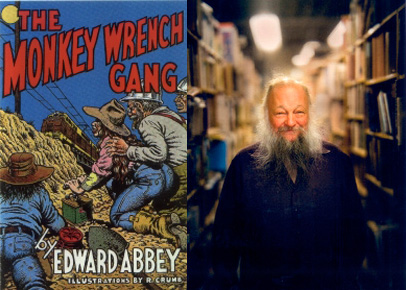 “R. Crumb Meets the Monkey Wrench Gang: Edward Abbey and the Modern Environmental Movement” is the title of a 3 p.m. talk to be given Sunday March 4 by Ken Sanders in the Gould Auditorium at the University of Utah’s Marriott Library.

The noted rare book dealer will speak on the works of his late friend Edward Abbey and the substantial donation of first edition Abbey books and other Abbey material to the library by San Francisco book collector Eric Hvolboll.

A reception will follow the lecture on the fourth floor gallery for the opening of the rare book exhibit, “Brave Cowboy: An Edward Abbey Retrospective.”

Sanders has been in the rare book business in Utah since the 1970s. From 1975-81 he co-owned The Cosmic Aeroplane. He founded Dream Garden Press in 1980 and Ken Sanders Rare Books in 1990. He has been the subject of stories in the Deseret News, The Salt Lake Tribune, City Weekly and San Francisco Magazine and appears as a rare books and manuscript appraiser for the PBS series “Antiques Roadshow.” His work tracking book thieves for the Antiquarian Booksellers’ Association of America was chronicled in the bestseller The Man Who Loved Books Too Much by Allison Hoover Bartlett.

Sanders is working on Unconoclasts, a project about Utah literary mavericks with artwork by Trent Call. Forthcoming projects for the local bookseller may include a work on Abbey.