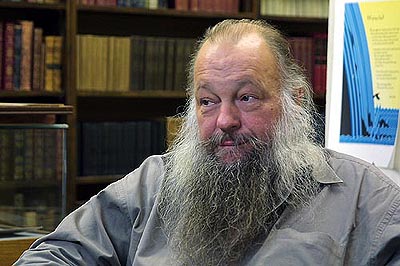 Ken Sanders, though neither an artist nor a gallery owner, has been exhibiting artwork for over thirty years.  In the various businesses Sanders has run over the years, including his current venture, Ken Sanders Rare Books, Sanders has developed a variety of exhibitions featuring everything from Rock and Roll posters and to paintings by poet E. E. Cummings.

It was a young Ken Sanders’ love of books that nurtured his appreciation of the visual arts. At the age of twelve, Sanders began to pay particular attention to the pictures in illustrated books. He developed a passion for the hand processes involved with the “book arts”. Sanders collected books with heroic and romantic illustrations by the artists of the Brandywine School such as Maxfield Parrish, John Arnell, Gustov Gore’ and Howard Pyle.

Sanders curated his first art exhibits while a co-owner of Cosmic Aeroplane in the mid-seventies. One of his first exhibits, “Air Powered,” featured airbrush art by national artists working during the sixties and early seventies. Fifty images from that show were also displayed at the Salt Lake Art Center.

Sanders and Cosmic Aeroplane also worked together to produce exhibitions with the Blue Mouse theater while both businesses were neighbors on 100 South Street. Exhibits hosted including Phillip Hyde’s “Lost Glen Canyon Images” and the extremely popular “60’s and 70’s Rock and Roll Posters” show. The poster show was also exhibited at the Art Barn.

During the Cosmic Aeroplane years, Sanders commissioned local artists to produce art for the annual Cosmic Calendars. Neil Passey created the classic “Cosmic Woman” calendar still recognized as a local icon. Many posters were printed from the calendar art created by artists such as Neil Passey, Pat Eddington and Rob Brown.

After the Cosmic Aeroplane days, Sanders started his own publishing company, Dream Garden Press, which produced seventeen National Park and Wilderness calendars in a single year. “I had to select from over 50,000 images submitted for those calendars,” Sanders remembers. Dream Garden Press published the famous Edward Abbey “Western World” calendar as well as many great books including the classic R. Crumb illustrated “Monkey Wrench Gang” by Edward Abbey and Trent Harris’ cult classic “Mondo Utah”.

Ken Sanders Rare Books opened about six and a half years ago and immediately began to display art shows. Notable exhibits held at the new bookstore have included an exhibit of photographs from around the world by Scott Carries taken while on assignment for NPR, and Lea Bell’s silkscreen posters and prints of Kilby Court concert announcements. “Lea is a great talent that is really going to go places,” quipped Sanders. “She is going to be included in ’The Art of Modern Rock’ a book dedicated to rock music related art.”

New exhibits in the works are a revival of the 60’s and 70’s Rock Posters show; an exhibit of marionettes and old puppets; photographs and stage sets created by Dave Brothers; watercolors, drawings and paintings by poet E. E. Cummings; and a show of old 10 inch, 78 rpm picture disks, with images on both sides of the records by obscure and unknown artists. Sanders plans on taping and playing the music from the records during the exhibit.

“I’d also like to do a retrospective show of works by Neil Passey, a local artist that created hundreds of works and never received the recognition he deserved”.

Sander’s interest in displaying visual art is not profit orientated, “I tend to gravitate towards the non-traditional stuff. I like to expose people to things they wouldn’t otherwise be able to see and experience.” The art, music and politics movement of the 60’s and 70’s spawned much of the art Sanders has shown. “I’m beginning to see a resurgence of that kind of art work starting to be produced by young artists which is encouraging to me.”

Sander’s favorite book is a compendium from 1927 titled “Achievements in Letter Press Arts”, a visual record of the best of the printing arts from that year. His literary passions include explorations and travels of the American West, visual representations of the west, Western history and literature, early Mormon history and illustrated manuscripts.