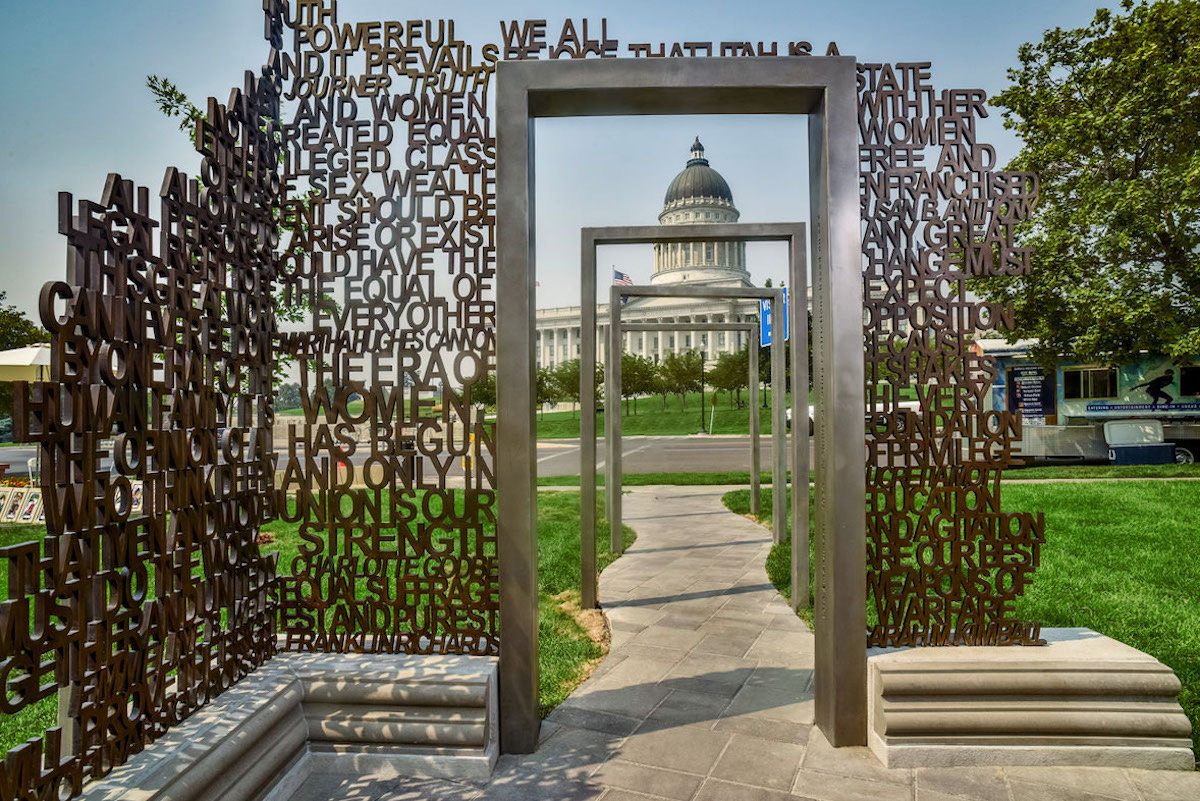 If you’ve been to the state Capitol recently, say for marches about the election or Black Lives Matter, you may have spotted a sculptural commemoration of inequality at another time in our history: the 100th anniversary of the ratification of the 19 th Amendment that gave many women the right to vote and the 150th anniversary of the first ballot cast by a woman under an equal suffrage law here at Salt Lake City Council Hall, where the thoughtful 2020 work “A Path Forward” is installed on the northeast lawn.

You may even have been tempted to sit at the little round table and pair of chairs to chat with a friend or perhaps to plop down on the wall of quotes and mull those for a bit.

If you’ve thought about sculpture as a piece you look “at” and walk “around” to view – like you would the Pietà – well, this is a site of bronze, stainless steel, and concrete that you really are supposed “to inhabit and move through,” explains Kelsey Harrison, who created the work with Jason Manley. Unlike more traditional, monumental sculpture that emphasizes verticality, hovering above the viewer, this conceptual work spreads out at ground level, on a horizontal plane with no barriers, in a successful attempt to blur boundaries between exterior and interior, private and public in envisioning the communal struggle for equal rights.

“It’s a unitary whole,” the former University of Utah arts professor says from Tennessee where she is now an assistant professor in sculpture at the University of Memphis. Harrison and Manley, an associate professor of art at Weber State University, required of this project, “that there would be an area for seating, an area that the viewer could move through, that it would have a horizontal area, and that it would be based on historical research.” And they researched exhaustively.

The table and chairs, for example, ooze charm but are brimming with historical significance. The chairs are replicas of the wooden ones in the Salt Lake City and County Building where the Utah State Constitution was drafted in 1895. Article 4, which prohibits voting discrimination based on sex, is engraved on the round tabletop, itself a re-creation of a tea table used for the signing of an 1848 document in which Elizabeth Cady Stanton included a resolution for the “sacred right to the elective franchise.”

Strategically placed doorframes indicate a timeline of voting-rights achievements for women and for people of color – who did not benefit from the 19 th Amendment — that was mostly for the good of some, and not all white women. American Indians, Asian Americans, Black Americans, and others were not enfranchised until the late 1950s and beyond. The words of local and national suffrage leaders frame the first passage toward the Capitol; thresholds widen as the path wends its way toward the building, indicating greater access to suffrage for all.

You don’t have to identify as female to enjoy the quotations. They are intentionally universal. “We wanted to celebrate the local role that Utah played but we wanted to include national leaders as well. We also didn’t want to whitewash it, so we included leaders from the abolitionist movement, which overlapped with the suffrage movement in its inception,” says Harrison. “And we had an unlimited trove of literature and language to choose from.” (She points out that the quotes on the far-left wall are much longer because they were able to bridge the left and right walls.)

Prominent LDS women, such as Martha Hughes Cannon and Emmeline B. Wells are included as well as a man, Franklin Richards, an attorney for the LDS Church, member of the Utah Territorial Legislature, and husband to Emily Richards, a founder of the Utah Women Suffrage Association, along with non-Mormon Susan B. Anthony (“We all rejoice that Utah is a state with her women free and enfranchised.”) and two favorites of Harrison’s:

“Truth is powerful and it prevails.” – Sojourner Truth

Born into slavery, Sojourner Truth was an abolitionist and women’s-rights activist who escaped with her infant to freedom in 1826.

“Any great change must expect opposition because it shakes the very foundation of privilege.” – Lucretia Mott
A Quaker, Mott was an abolitionist, women’s-rights activist, and religious reformer.

A gift of Better Days 2020 and Capitol Preservation Board, Utah State Capitol Collection, the work is located at 300 N. State Street, which houses the Utah Office of Tourism, a visitor center and bookstore.
Manley, who was educated at Skowhegan School of Art, Skowhegan, Maine; MFA, 2004, University of Arizona, Tucson; BFA, 1998, University of Kansas in Lawrence, says: “The sculpture methods Kelsey and I incorporated included woodworking, metal working, laser cutting, 3D wax printing, and metal casting.” Various influences contributed to his part in “A Path Forward.”

“In my recent work I have been creating amalgamations of language and architectural structures using text with political, and/or poetic meaning, to construct symbolic forms out of words. My recent wood sculpture project at UMOCA in 2017, titled “Shrinking Room,” used quotations from historical figures who addressed wealth inequality, and this previous work played a major influence on my contribution to this collaboration. The idea of expressing language as a physical thing, being sculpted, or a structural building block, is a consistent theme in my work, and in ‘A Path Forward,’ it was exciting to see this approach used for bronze casting. The text wall, as we referred to it, was created with 3D wax-printing and then went into the traditional lost-wax foundry process,” he adds.

“I’m fascinated by this combination of new computer technology with ancient sculpture methods, as a way of addressing the subtleties and evolution of language marked by technology and culture, but ultimately it became impactful for monumentalizing the decisive words of suffragists who sacrificed and brought about great change for our democracy.”

This sculpture feels different from other work created by Harrison (MFA, 2017 in Sculpture, School of the Art Institute of Chicago; BFA, 2014, Sculpture and Latin American Studies, Purchase College, State University New York, Purchase, NY) who usually focuses more on the theoretical, “on asking how public space and architecture affect identity and possibility for the people who live inside of it. Here, I worked with Jason who has a strong aesthetic. It’s very visible in the wall of text. The composition of the site is where my touch is more visible. Collaboration allows two people to make a work neither would have made alone,” she says. “We are both willing to have strong opinions and both interested in starting from a research perspective. We wanted to begin with this idea of a sculpture you could inhabit and move through,” she says of their collaborative process.

“We talked a lot about Memory Grove, a place I really loved in Salt Lake City. The Irish Hunger Memorial in New York meant a lot to me. And a Henry Moore memorial I used to lay inside of and climb on where I went to school at SUNY Purchase [in upstate New York]. We had a lot of overlapping ideas. We were both interested in material and in the material world,” she recalls.

Most important, Harrison says, “In this case, there was a chance to actually do what I had been thinking about: build in public space and affect identity and possibility for those who live in it.” 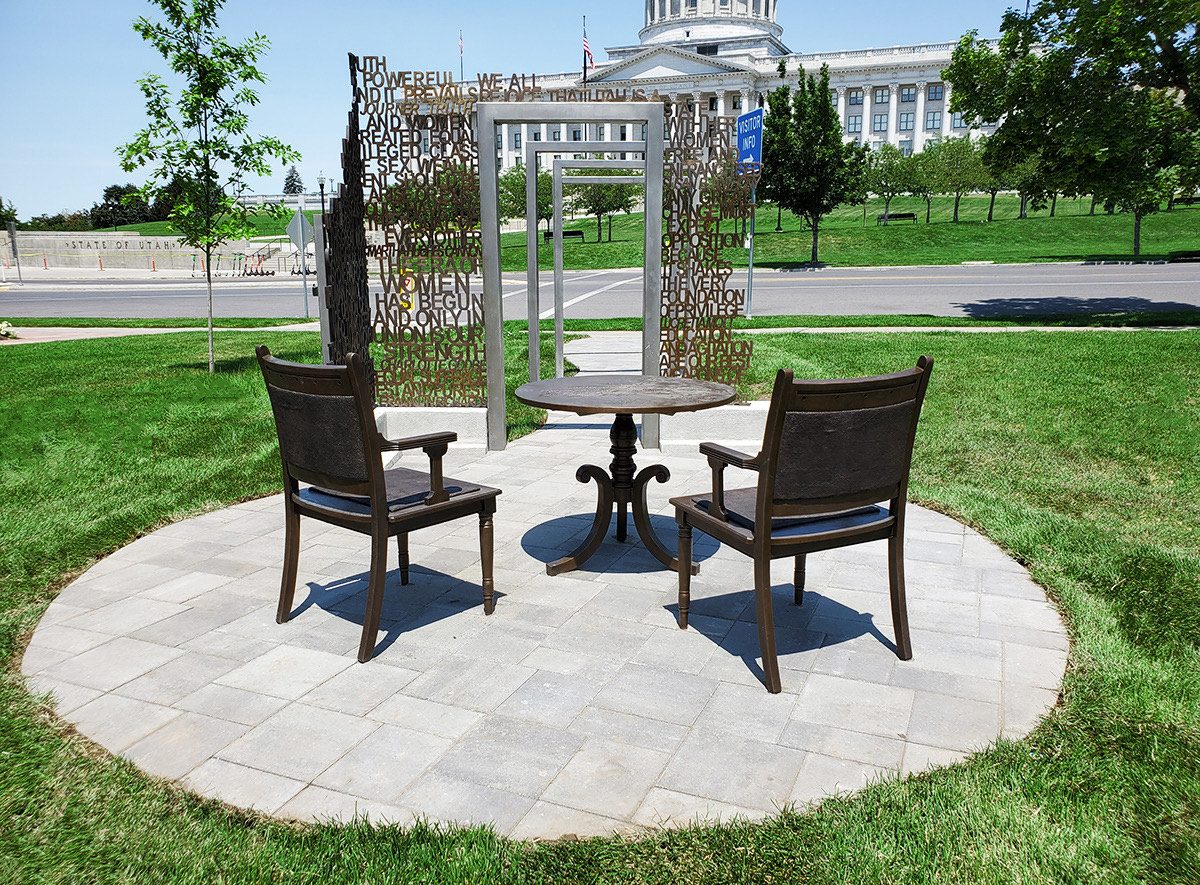