Keeping Up With The (PhD.) Joneses 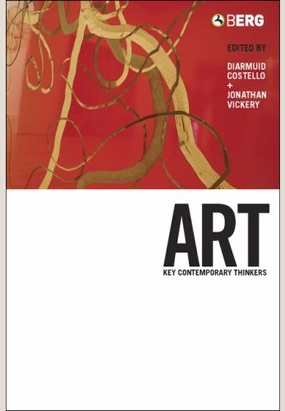 When I picked up the February edition of 15 Bytes and read Jay Heuman’s missive on the miscomprehended Clement Greenberg, a response to an earlier article on criticism by Geoff Wichert, I thought to myself, “Oh no, there goes the neighborhood.”

15 Bytes had always been such a nice place where a decent person with an interest in things visual could lie down (well, if they have a laptop) and spend a few restful hours catching up on the local art scene. And then Wichert and Heuman had to go and stir things up with a battle over critical interpretation. Staring at my computer screen last month, I had visions of a bleak future: an onslaught of MFA and MA students rushing in to commandeer our beloved ezine, choking it with jargon and footnotes, and sloshing us decent hard-working folk down the drain with talk of Kristeva and Derrida.

And then when I learned that the ezine had been offered a preview copy of a new book on contemporary art thinkers — would I be interested in reviewing it, our editor asked — I was sure our fate must be sealed.

But, rather than hide away from the future, no matter how bleak or tragic, I decided to give the tome a peek. So, whether you want to be one of those young art critics viciously fighting it out for a room at the top of the art critical mountaintop, simply want to understand what the aforementioned are jabbering about, or want to help man the barricades to keep them at bay, I offer you Art: Key Contemporary Thinkers

Published by Berg Publishers (Oxford and New York), this collection of entries on forty-five philosophers, theorists, and artists, seeks to make accessible the arguments and ideas of some of the leading thinkers of our time in relation to the visual arts. Any such attempt will inevitably leave some readers disappointed by the omissions, but in this case I believe the editors should be lauded for their careful selection of important thinkers, both in Europe and America.

Editor Diarmuid Costello lectures in the department of Philosophy at the University of Warwick. Co-editor Vickery lectures in the Centre for Cultural Policy studies at the same University. Their positions should give a clear idea of the emphasis of the book, concentrating on the philosophical questions involved in contemporary visual arts and how they relate to larger aesthetic questions. The editors have chosen leading international experts to summarize and appraise their selected thinkers.

Costello and Vickery have divided the book into four sections. Section One, “Art Theory and Practice,” examines the writings of working artists, from Robert Smithson to Daniel Buren. The second section includes art historians and theorists who “have made, or still are making, the greatest impact on thought about art during this period.” The third concentrates on philosophers who have written about aesthetics, including Theodor Adorno, George Dickie and Arthur C. Danto. The final section, “Theory and Philosophy of Culture,” reflects the diversity of thought about art today and draws on a range of disciplines, including sociology, semiotics and psychoanalysis. As you may have noticed, not all the thinkers surveyed here are exactly contemporary (i.e. living) but they have been included when their theories continue to have sway in our current dialogue (Jay Heuman will be happy to know that Clement Greenberg appears in section two).

Each thinker in this survey book is given equal space. In three or four pages, the experts chosen to expound on each writer provide a concise account following a consistent pattern: 1) establish the thinker’s credentials and major works 2) discuss the main thrust of their arguments 3) assess the critical reception of their work 4) relate their work to larger cultural issues. Some thinkers fare better than others – depending on whether a theoretical friend or foe is writing their piece — but for the most part the writing is impartial and surprisingly informative. I wouldn’t say this about most books of this kind, but what I read made me actually want to go out and read some of the original source material (so far, though, I have restrained myself).

While written in relatively jargon-free prose that seeks to reveal rather than obfuscate, I could not recommend Art: Key Contemporary Thinkers to the neophyte; but for the student of critical thought with a basic understanding of the issues at hand, this collection provides a wonderfully concise view of the critical thought of our time.