Kari Hoaas’ ONE at Sugar Space 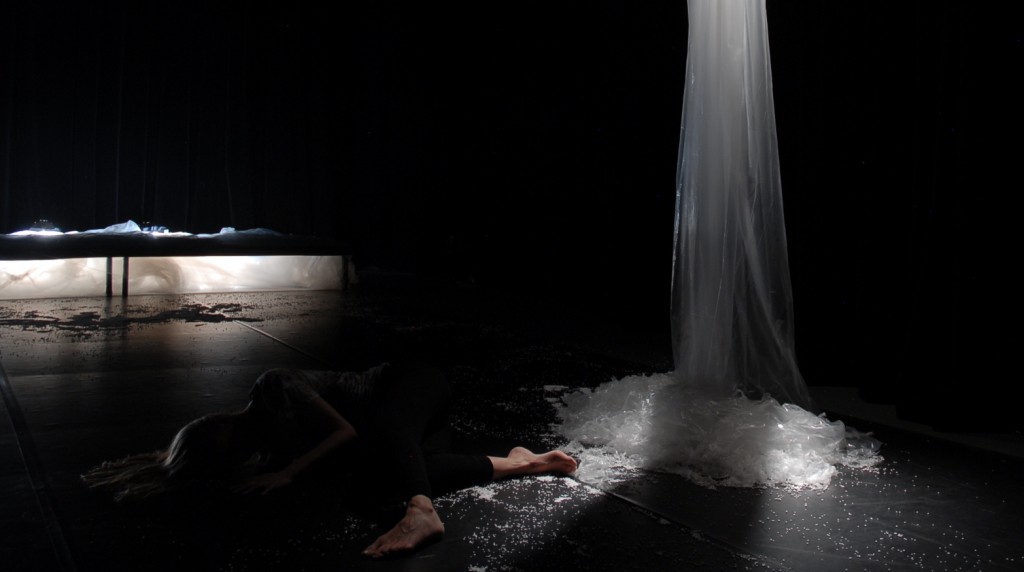 Entering the (relatively new) Sugar Space Arts Warehouse on Friday night was exciting for more than the fact that Norwegian choreographer Kari Hoaas was performing her evening-length work recognizing the continuous global struggle for women’s rights. The venue itself is spacious and filled with possibility and a separate studio on the property hosted an exhilarating dance and music jam with Porridge for Goldilocks before the show. The short sunset-­lit walk from studio to warehouse provided a nice palate cleanser between joyful group improvisation and a somber solo performance.

Hoaas and her collaborators set the scene with moderate fog and a piece of almost opaque plastic hanging from the forty foot high ceiling. There were also thousands of little styrofoam balls strewn across the stage with a purposeful pool near a narrow platform spanning the width of the upper panel of the stage, furthest from the audience, but close enough to see.

The piece began with a clicking sound that built continuously as one light slowly revealed Hoaas seated on the narrow platform. She began in a reclining pin-up girl position, head hanging back so as to appear separate from her body, which turned into a series of slow and anguished poses, similar to a Butoh performance. Her grey hoodie had an attached piece of black fabric covering her face and presenting her as an archetypal, yet contorted, female body. Her physicality was tender and beautiful to watch, but I found that the transitions between her poses were abrupt and lost the illusion of physical distortion.

The transitions throughout the piece, in fact, could have been smoothed because some of the energetic shifts in Hoaas’ careful movement were not supported by the durational nature of the piece. The composition evolved slowly with that repetitive sound of the clicking alternated with Philip Glass’ ubiquitous Metamorphoses. The latter piece of music is wonderful and contemplative but has been used so much that it felt like Hoaas used its power to be a tear jerker. Perhaps it was needed to find the state of sadness that she expressed with her anguished facial expression and trembling movement to present herself in context of the plight of women.

The piece was heartfelt and loaded with raw movement; however, Hoaas’ stated intention of seeking “to challenge the inherent restrictions of gender” was compromised by nervous representations of androcentric female posturing and an overly­ prolonged section which seemed to lack intention beyond the presentation of more typical dance movements.

The dramaturgy was artful and appropriate along with the sound score that supported much of the dance, but due perhaps to the length or an unintentionally awkward dynamic, I wasn’t permitted to feel like an active participant. That feeling aligns with the oppressed female experience, but was projected onto the audience rather than shared through empathetic response by the audience. Despite that, the piece was worth seeing to stir up ideas about feminism in the contemporary moment and to experience a foreign aesthetic that one would not normally encounter here.

Emma Wilson is a loveDANCEmore intern and is a student of dance and environmental studies at the University of Utah. This review, and others by loveDANCEmore are in collaboration with 15 BYTES.