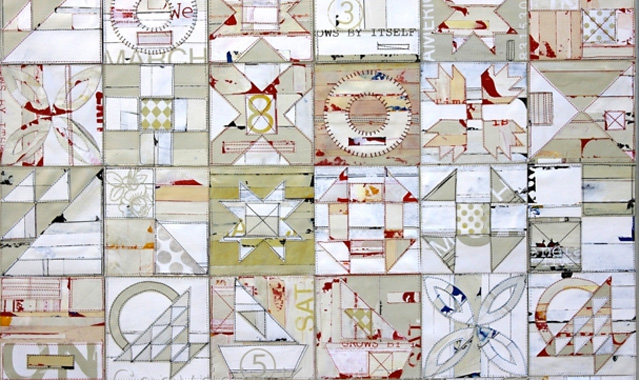 In the 1990s, a theory gained popular traction — though never professional credence — that in the nineteenth-century quilts were used to help runaway slaves along the Underground Railroad. Hung outside a house or slave shack, the theory went, the quilts were either signals to passing slaves — indicating which houses were safe, or where food might be found, etc — or else were used as a sort of training for would-be runaways, helping them to memorize various aspects of the journey north.

Kaori Takamura, who is showing this month at Park City’s Meyer Gallery, cites this theory when discussing her American Quilt series, mixed-media paintings that at first glance resemble traditional quilts and are filled with a variety of abstract symbols. Folk art has always had a penchant for repetitive abstract motifs, from the curvilinear designs in Celtic art, to the hex signs of Pennsylvania’s Dutch country, and Takamura says she is drawn to the power these abstract symbols accrue as they are used generation after generation.

Her paintings are multi-layered works on canvas that overtly reference American quilt traditions, and even mimic aspects of their design and creation, while equally deriving from Takamura’s own background in graphic design. In her native Japan, Takamura worked as a packaging and graphic designer, developing branding campaigns for several companies. She approaches her works with certain mass-produced elements, silk-screening words or symbols and then cutting them up to appear in different forms throughout her intricate works. Elements from multiple screens might appear in one abstract motif. These are either created positively, as sewn elements that sit on top of the canvas, or negatively, sewn behind the canvas and revealed through openings.

The bold colors and the acrylic paint have the feel of the mass-produced, graphic-design world we live in, rather than the earthier textiles of antique quilts. Despite this sometimes plastic feel, Takamura manages to keep her canvases vibrant with attention to details that activate her canvases: the various patches are held together by thick machine stitching, but Takamura also stitches in non-essential areas, creating decorative lines and textures; she also draws with her thread, stretching it in loops across the canvas; and she masks, paints and peels areas to create intriguing surface textures. The works are generally large, the size more-or-less of a quilt, but the exhibition also features a number of smaller works in which an individual shape — of a heart or pear or butterfly — is given its due.

The theory about quilts and the Underground Railroad has been debunked by most scholars, but there is no doubt that simple symbols, from a fish drawn in the sand to a yellow star sewn on a shirt, have always had the ability to carry more weight than their fragile contours lines would suggest. In our own time, the addition of an emblematic swoosh can double the price of a shirt coming out of sweatshops in Bangladesh or Thailand. Draw a cartoon mouse with his ears too well rounded and you’re likely to be sued. Spend time with Takamura’s paintings and you may find yourself coming upon some occult knowledge, or an idea for a new t-shirt design.