Joseph Toney looks to a variety of sources for influence. He aspires to be like Albrecht Dürer, the German Renaissance artist who was an early typeface designer, mathematician, painter, illustrator and printmaker, by mastering several mediums. He looks to 20th-century art movements like Cubism, Futurism and Op Art for inspiration, but also is interested in contemporary architecture and street art, as well as more traditional work from 15th and 16th century Japan. 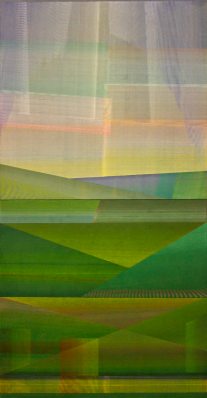 Eusébio Sempere. “The four seasons, 1980: Spring.” Gouache on board

Asked to identify a single artist he’s interested in, Toney says Eusubio Sempere, a Spanish artist he discovered when he saw his retrospective at the Reina Sofia in Madrid a few years ago. “I was simply blown away by his use of line to create depth, shadow, and movement,” Toney says. “His use of repetition of line and mastery of color to manipulate the way light plays on the surface give depth to his pictorial composition.” Sempere was a sculptor, painter and graphic artist working in a geometric mode during the Op art and Kinetic art movements. Toney says he’s drawn to the more “representational” aspect of Sempere’s art. “While other work from that time was rooted in repetitive patterns to create optical effects, Sempere’s work felt more rooted in reality. He had an ability to use simple tiny detailed lines and geometry to create images that represent no one particular place, but allowed for the viewer to see and recognize something that they were familiar with. Sempere was able to develop a strong visual language through all of his work that translated across multiple mediums. Seeing how he applied his trademark style through painting, sculpture, kinetic art, and drawing is something I hope to be able to do in my own work one day.”

Toney’s background in graphic design can be seen in his attention to detail and the clean, concise look of his works. The North Carolina native who now calls Salt Lake City home, began using rulers, compasses and French curves as an aid for illustration, but soon developed his own variations on the tools to help him create calculated, quasi digital-looking marks in his acrylic paintings. “Through the use of these devices, I am altering the natural landscape to produce a new visual language … I hope that my process acts as a stimulus to the viewer, inviting them to comprehend how the marks were made and question what our role has played in our ever-changing and human-altered environment.” 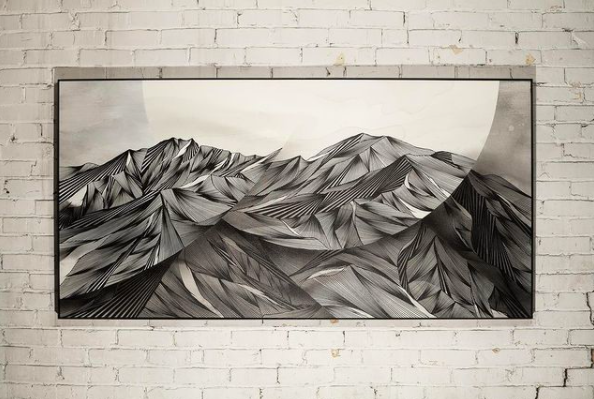 You can see more of Toney’s work at https://instagram.com/joseph_toney.