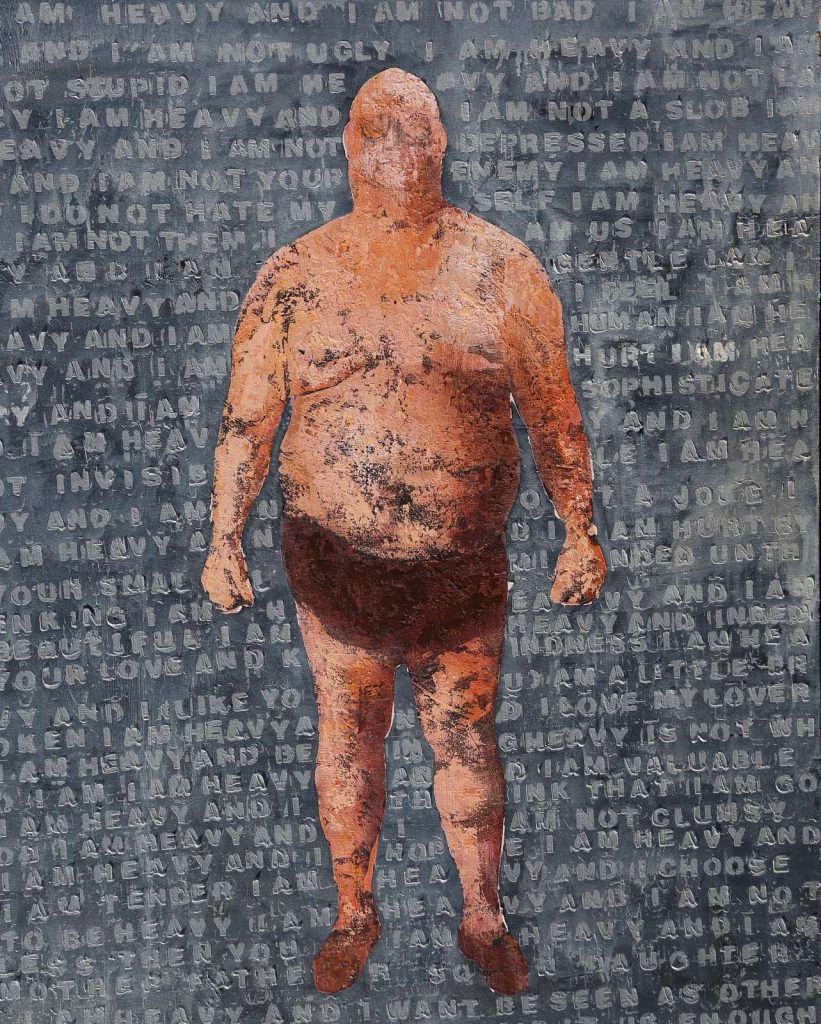 We all can relate to the idea of the inner child, the concept introduced by Freud that everyone possesses a “childlike aspect” within the unconscious mind. This inner child manifests as a subpersonality, an aspect of one’s character that is shown during times of challenge. It is a reflection of both the negative and the positive aspects of how we were raised and who we were in adolescence. Certainly, we can become someone else as we grow into adulthood, but it is unlikely we will not still be influenced — or, perchance, burdened — by our childhood identity. In Serenity Now! at Nox Contemporary, John Sproul explores his own inner child and how it  affects his digestion of the world.

The impetus for the show begins in Sproul’s childhood, when he was bullied for being overweight. Though Sproul eventually sprouted into a lean young man, able to catch the attention of his female peers, he feels he could never shake his childhood self-perception. In talking about wrestling with this idea in his new works, Sproul says he lacks a desire for resolution, but rather views his practice as a domino effect, one that allows for questions to lead to more questions. In a rather peculiar phrasing, Sproul describes visualizing his work as “trying to see every angle of a sphere” — a task near ludicrous and certainly never-ending. One might even go so far as to say, a rather silly pursuit, one which a child might think up and pursue. 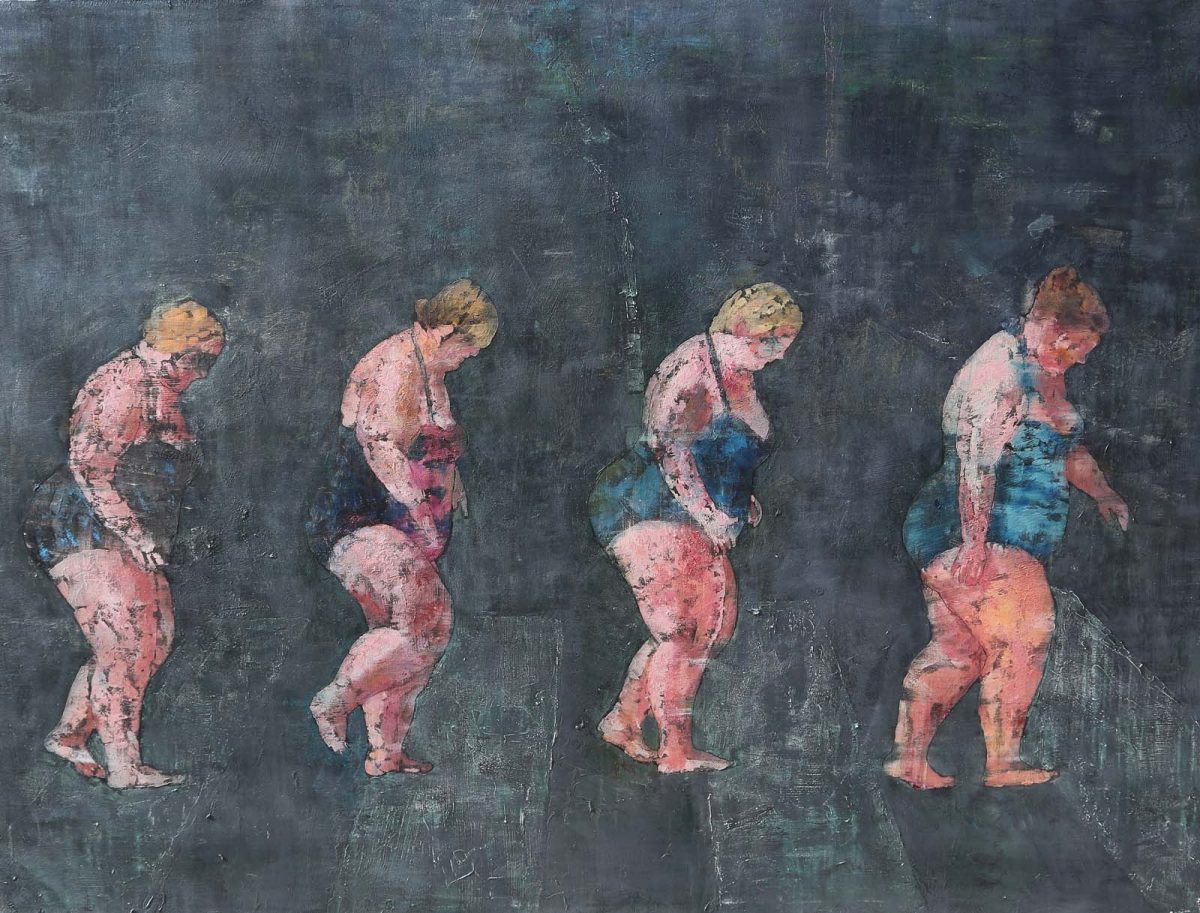 “Serenity Now!” is comprised of six large paintings, all of which depict the human form. Four of the paintings involve a form that would be considered, in a contemporary understanding of beauty, as undesirable. The other two paintings depict groups of people in obfuscated landscapes. Sproul approaches the imagery in his work in an unsurprisingly childlike — though curiously compelling — way. His work starts with what is almost a trite concept — angst around body image — which is paired with equally trite and iconic imagery. These images are then tweaked with familiar ways of expressing a near universally felt shame in the appearance of one’s body. It is in the almost redundant use of familiarity that the works expose an exceptionally unique and thought-provoking concept: one that seeks to infinitely question our common burdens and to follow an answer through an intellectual denial of intellect. Sproul has taken the heavily used theme of body image and stripped himself of a need to find a novel answer to the subject. In doing so, a refreshingly evocative look on body shame is made.

“The Fabulous Four,” one of the first paintings encountered in the gallery, is a reimagined version of the Beatle’s iconic Abbey Road album cover. In Sproul’s painting, John, Paul, George and Ringo have been replaced by four obese females wearing retro, one-piece swim wear. These women walk in a manner suggesting shame, as if carrying a metaphorical weight as heavy as their literal weight. The painting’s background is muddy, just translucent enough to give a taste of the crosswalk. It is painted loosely, displaying chunky brush strokes and a patchy texture so that the background is permitted to seep through the bodies. The large scale causes a feeling of being enveloped in the murky landscape, as though the viewer is watching women trudge through a dystopic atmosphere. It is true that both the image of the album cover and of overweight women is not one of a distinct originality; however, the concept lies not with the imagery. When one disconnects from a need to academically analyze the image, one is left with a primal and shared trauma.

Iconic imagery can be seen throughout the other paintings in the exhibition. The piece “J’ai Faim” depicts a stereotypical scene of Roman decadence — specifically of three lusciously proportioned people in a flat and muddy background. Sproul has stripped the wealth and luxury from the figures, and left them to lounge in a vacant atmosphere, only occupied by their bodies and thoughts. “Skinny Itch” shows an overused image within the topic of eating disorders — three girls, with their heads cropped out, stand in a line showing their emaciated bodies. The text “I am fat” is copiously written in the background. Though the pairing of these two images almost reeks of overworn ideas, the piece is left so raw and universally felt that one can only feel an overwhelmingly emotional response when viewing it. This feeling is echoed by the piece “AM AM,” which shows a single overweight figure of a man. The man stands centered in the piece almost as if he is gazing at his reflection in the mirror. Text of self-hate and self-doubt is scrawled across the background, echoing the man’s stream of consciousness. A repeated image of an obese women running appears in “Jazzercise me,” which illustrates a line of jogging women getting bigger as they grow farther away from a blurry building in the background. The image of an overweight person jogging is notably heavily used within cinema and the media to poke fun at people who are overweight. The images that Sproul chooses to depict are ones we all feel, though very few of us will admit to having such common insecurities. The bold choice of taking these universal moments and painting them large-scale, takes that experience and forces a confrontation with and admittance to that experience. Sproul is nearly ripping out pages of a universal diary, allowing viewers to experience a shared pain. 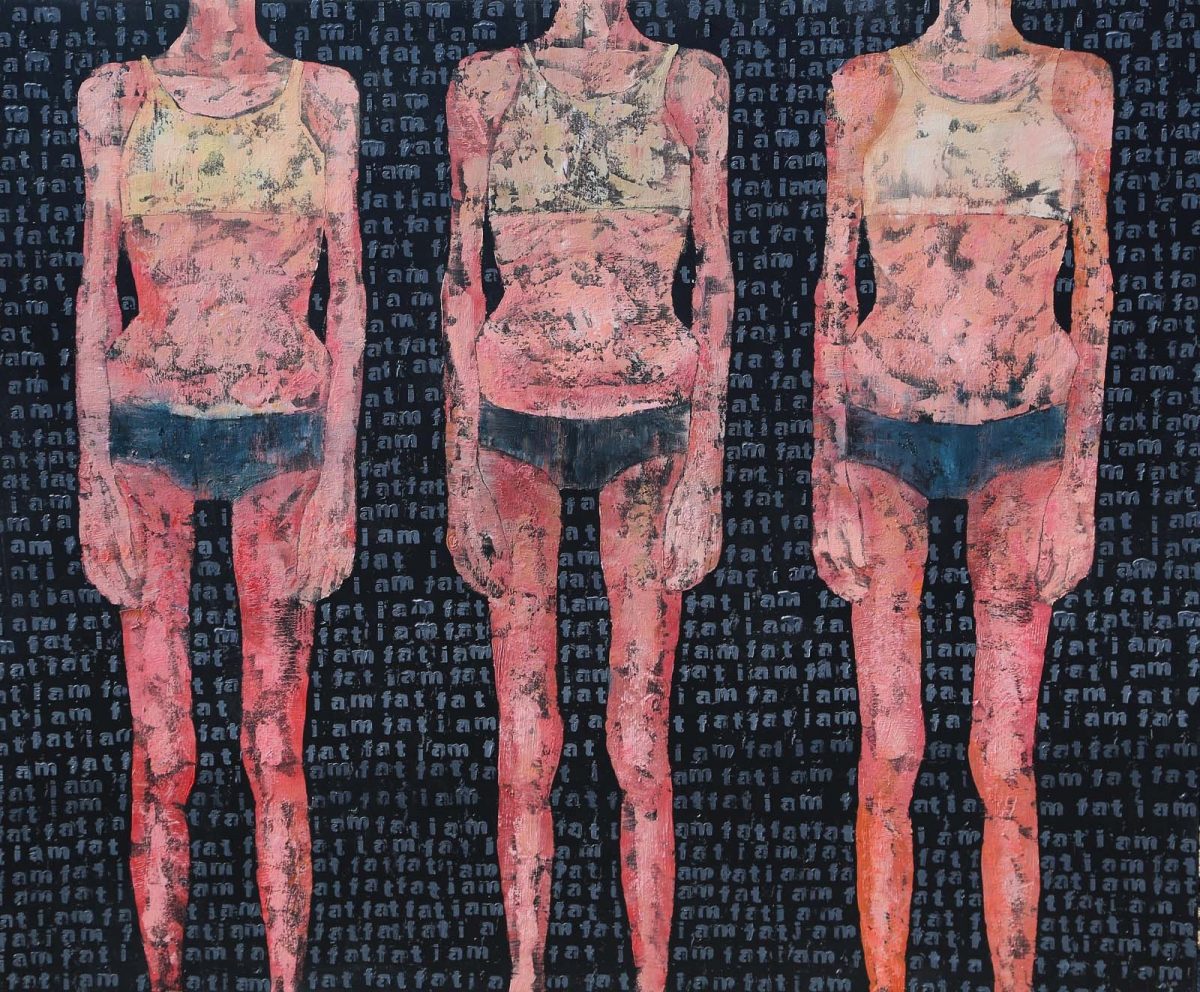 Sproul’s subjects are chosen by instinct, without thought or heavy research. They are then depicted in a manner that shows little regard to conventional or realistic modes of painting. They are done in what looks to be a quick mode of painting in the heat of emotion, unconcerned with providing an explicitly novel perspective. It is as if rather than the adult Sproul examining his lasting childhood insecurities, he has allowed for his inner child to proceed with the examination. He does not seek to enlighten the audience on what it means to be ashamed of their body; the work instead reads like a mind map of what it feels like to have these insecurities.

In his book Making, British anthropologist Tim Ingold discuses a material language that is based around seeing the world through the perspective of a child. He wills people to lose connections made between materials and their definitions which dictate their function. Ingold reasons that if we view the world with a childlike naiveté, we can explore it broken from our preconceived notions of how we are to interact with it. Sproul’s exhibition necessitates a viewer see his work detached from accepted modes of how to look at and analyze artwork. The stylistic and conceptual choices are so raw and universal in nature they force the viewer to realize their placement within the discussion. An emotional impact from the work is not distanced by layered metaphor. One should not think too hard about, but rather be open to feeling what the work echoes: it may be as important to view Sproul’s work with a childlike perspective as it was to make it.

This mood follows through the entirety of the work in the show, only to find relief by a scattering of humorously sharp and lumpy 3D-printed sculptures. While the sculptures feel visceral and uncomfortable in their likeness to tumors, Sproul’s titles for each are silly in nature. This peculiar addition of lighthearted humor does not detract from the heavier theme of the paintings. Rather, it further solidifies the erratic mindset of having issues with one’s self — one that simultaneously attempts to justify and villainize what is being felt.

The show, in its ease of subject matter, decision making, and gestural style, becomes evocative of what might be described as a manically curious child. A thread is easily seen between the paintings, suggesting that as one piece is being made, a new question has already been formulated. Like a child that continues to ask you “Why?”, there is no explanation found to be satisfactory enough to bring an end to questioning. In a method suggestive of being loosely blindfolded, or the feeling one gets when playing the game Hot and Cold, Sproul analyzes both the impact of his childhood trauma and our perceptions of the unideal body. His practice is one where intuition, curiosity, and a gut instinct is at the core, and an allowance for the unknown is basis for further exploration. Sproul ventures to engage his inner child in a never-ending game of 20 Questions. 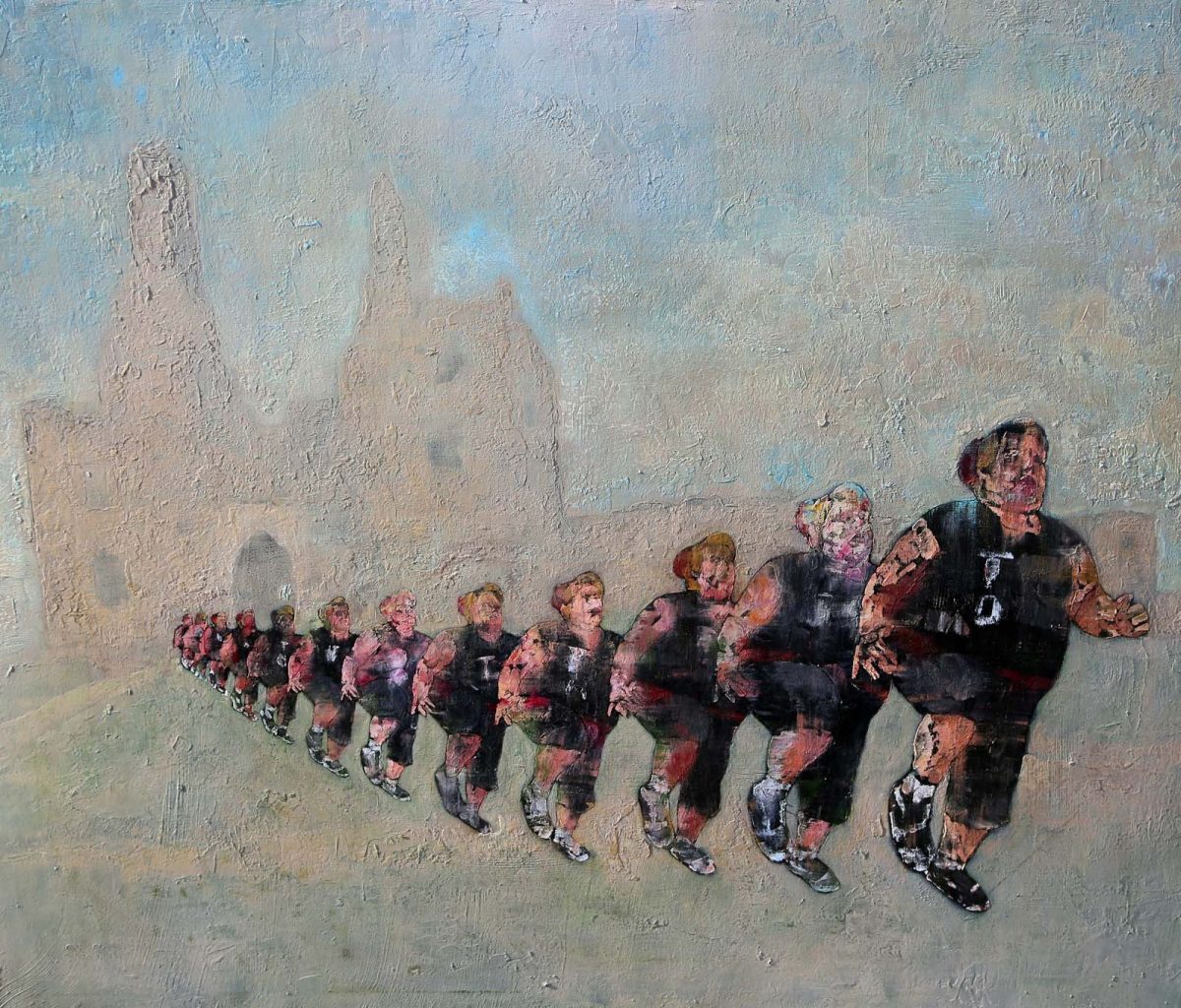