John Sproul, Lost and Found, in Brother Be Gone 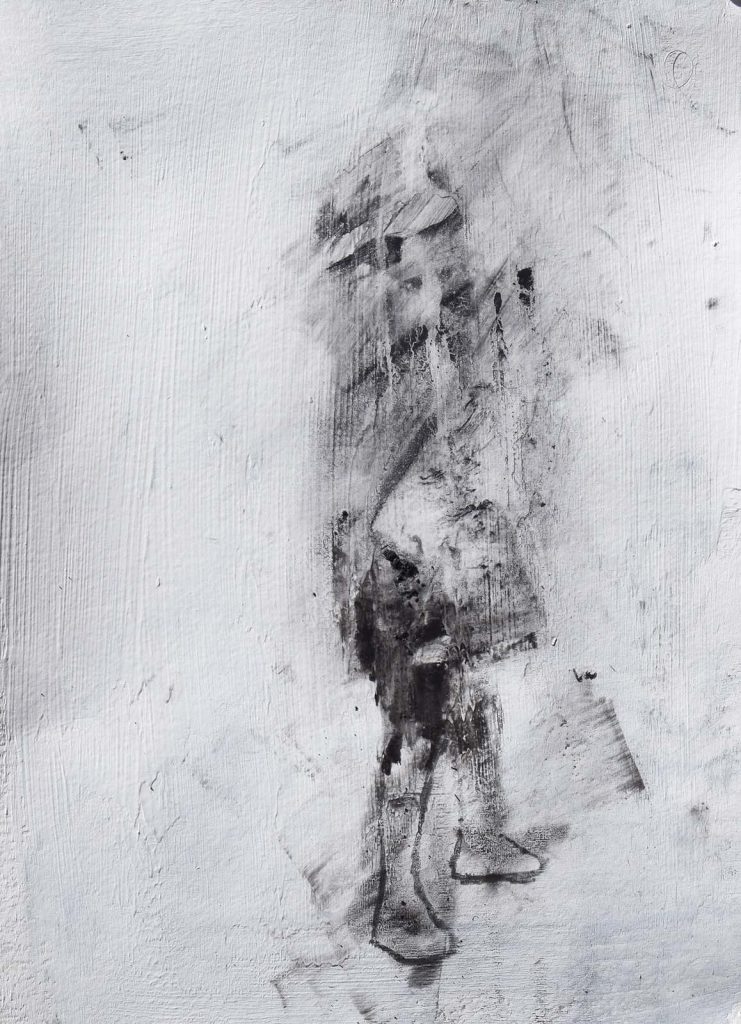 In the enigmatic “Nowhere On” the term “figure drawing” initially sounds ambitious: only the lower legs, from the knees to the feet, are drawn. Above them, a cloud of almost cubist marks could be anything at first, or nothing. In essence, then, the figure reads in reverse, from bottom to top, the calves suggesting thighs to the seeking eye, then what might otherwise be a vague pentagon organizes into a compelling three-quarters view of a torso, its left arm extending to our right. In the past, John Sproul has painted figures, alone and in pairs, so sharply defined they seemed cut out with a scalpel. These are not them.

Sproul’s brother be gone collects thirty graphite and charcoal drawings — a medium this artist has essentially reinvented and all but made his own. He began them in tragedy and grief, in response to the death of his longtime friend, Dave Allen, who had suffered for months from melanoma, a sexually dimorphic cancer caused, of all things, by daylight. Scheduled to be shown a year ago, the exhibition was delayed by pandemic shutdowns, and is only now open at the Alice Gallery. For English speakers, the most poignant among the given titles may well be “Young Forever.” This compensatory American motto, heard and seen everywhere from the windows of hot rods to tombstones, expresses a universal wish for those whom we have lost too soon. It also may refer to how young John and Dave were when they became friends, and so measure the passing of time. But for Sproul, and anyone who knows Asian-Pacific culture as he does, the ultimate title might rather be “Ambruk,” which means many things, including:

Anyone who knows grief will be able to identify with every one of those verbs. 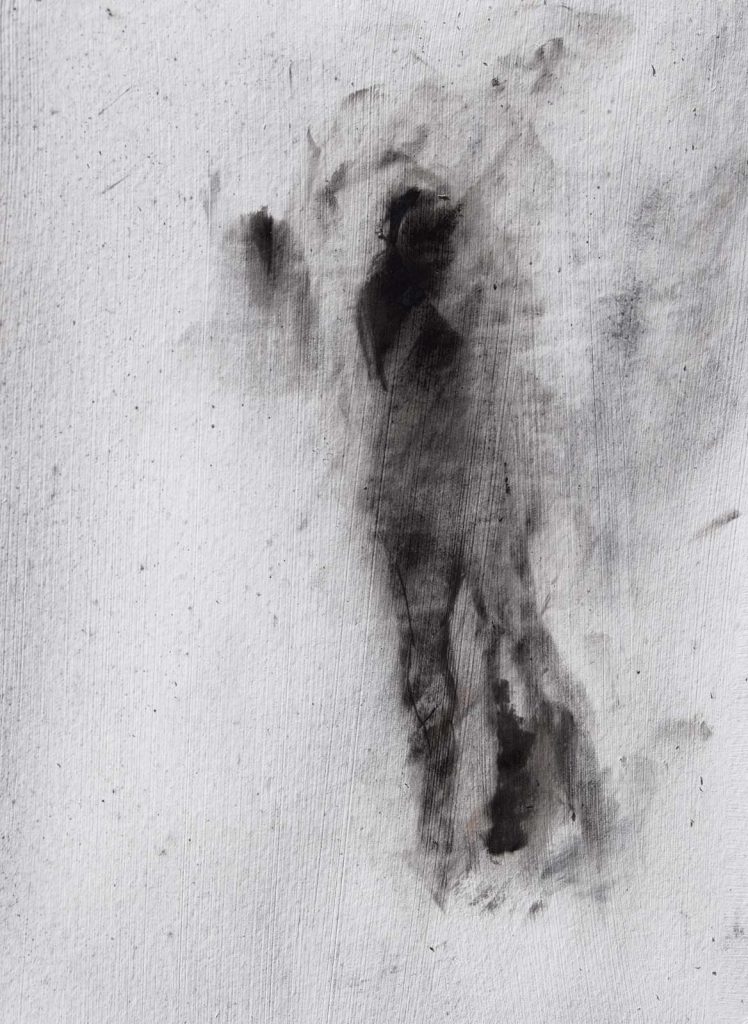 Sproul not surprisingly found that, as he worked on these drawings, they came to address not only his loss of a friend, but losses of other sorts. This may be when pairs and trios of figures emerged, relationships lost. Not that everyone has felt what he went through: the very young, the fortunately blessed, and the indifferent may very well not know the anguish that comes with a mouth suddenly flooded with salt water tears. If hope, as Emily Dickinson said, is the thing with feathers, and joy is always fleeting, grief is the injury that never heals.

To appreciate Brother Be Gone is in part to grasp the surprising capacity of black and white materials to capture both external appearance and inner reality at the same time, or in the same space. Some of the works include color, usually in small amounts, but the true marvel is the power of seeming smudges and smears to turn into vivid, specific details. At a certain distance or angle, a black oval reveals a face, or a procession of infinitesimal figures walking through a storm. Her posture may reveal hidden truths about her state of mind, or a calm mien may suddenly crumple into a revelation of unbearable suffering. Within these animated clouds of bent and smeared shadows, emotions and knowledge swirl into visibility and then fade — not away, but back into crouched waiting. In “Ambruk,” a kneeling figure lifts what looks to be a cup: a beggar or a supplicant. Is the bearer falling, or fallen, or could it be rising? In another, untitled drawing, a standing figure’s legs fade away, as if to defy Lincoln’s maxim that they should be long enough to reach the ground, or as if she had nothing to stand on any longer. 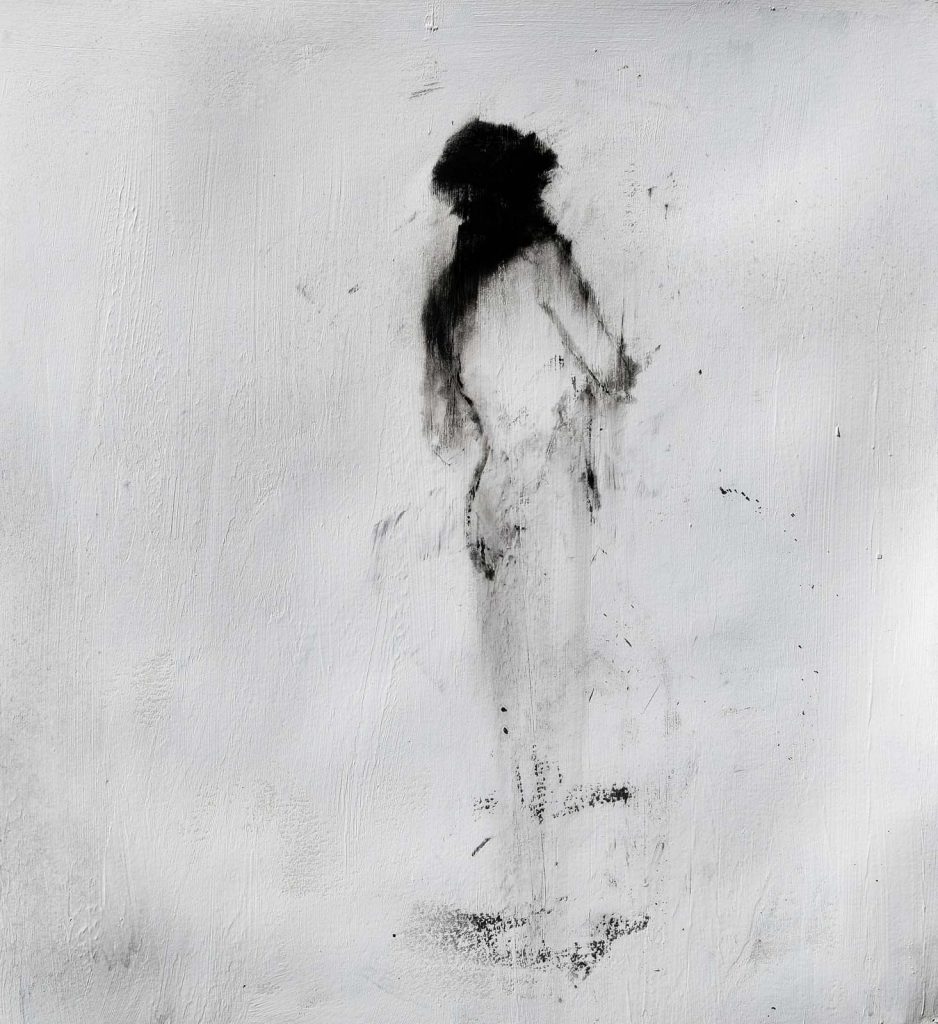 In spite of the chaos these works present with, Sproul’s mourning shows essential signs of self-control and aesthetic choices. Many, perhaps most, of the drawings are done on prepared grounds, suggesting something like meditation: white paint applied with a wide brush, creating a textured surface to which the black media respond. This is a characteristic of mastery: when emotions struggle for coherence, years of discipline and practice step up and hold the line. The artist has remarked that with loss, no matter how painful, something is also gained, if only what is learned. Sproul honors what he has lost by cleaving to what he has gained.

And finally, it’s not possible to tell for certain if these figures are disappearing into the chaos that empowers us to see them, or emerging from it. Whatever is happening to them is how we are able to see them, as indeed something lost or found acquires a special meaning thereby. The one important thing we can discern about them is their postures, how they are posed, and this presents a riddle. Many are silhouettes, a form Sproul has used before to great effect, and which leaves open such basic questions as whether they are facing us or turned away. Each of these ways of seeing them is ultimately a choice, and in how the eye decides to see them, an attitude of mind is revealed.