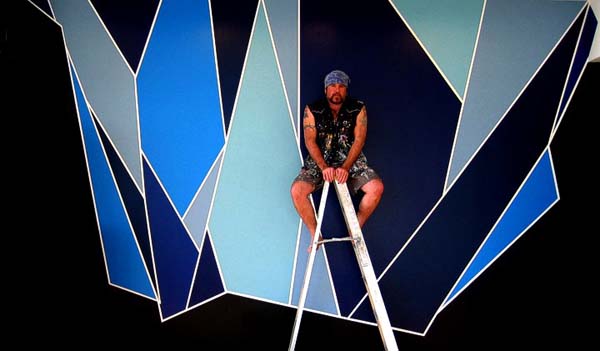 Some of you may remember his New York debut exhibit, (re) DEFINING SPACE, in September. The 13 pieces for the exhibit were large three-dimensional canvases, meticulously designed on the computer before brush ever touched canvas. For this current project, Bell did no pre-design or conceptualization. Bell related this, via email from New York:

“This one came out of a conversation with the client. She wanted something that reflected her surroundings (glass towers) & her place within it. I spent some time on the roof of Trump Tower (across the street) looking up at this place & drew my inspiration from there. When you look at the building (Time Warner) you see reflections of reflections of reflections… a mixture of sky & architecture, it all becomes abstracted within the glass, almost like a cubist painting . . . The best part of the entire experience has been Sandie’s belief & confidence in the work. She has let me do what ever I wanted to . . . Prior to coming here to paint, I did not have the measurements for the room, just a general idea of proportions. The entire piece was done without a single measurement, I just responded to the space & freehanded the whole thing with masking tape one shape at a time.”

Bell says the mural took three 10-hour days to complete. Bell has been talking to several New York galleries regarding representation. All I can report at this time is that negotiations are ongoing and the outlook is hopeful. Watch for further updates on John Bell in New York. And remember, you read it here first, in 15 BYTES, Utah’s cutting-edge art ezine!