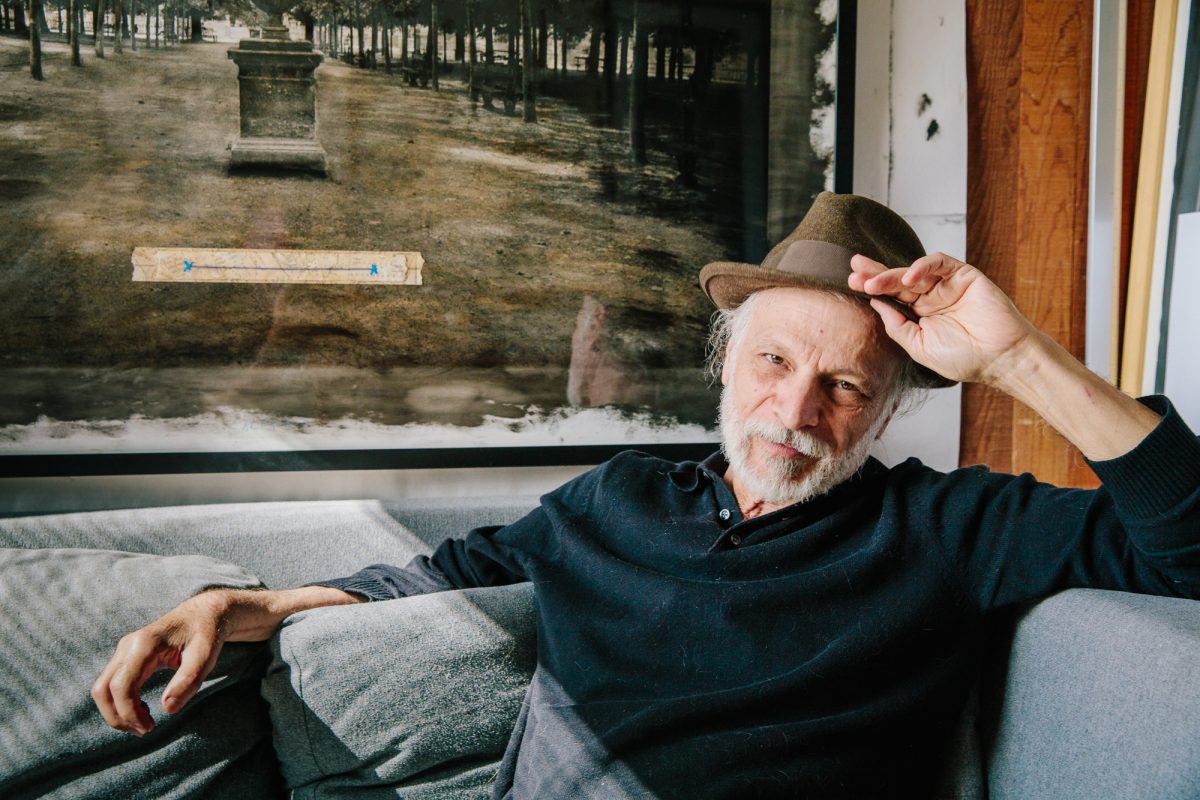 Seemingly a bit lost in the 21st century, Joseph Marotta finds a number of things wrong with now; and particularly with here. His photographs explore the concept of time – the way we experience its passing and how that experience now seems to be accelerating.

So when he retires in June from the Department of Art and Art History at the University of Utah, Marotta will spend up to half of every year in Europe—for cause: We lack a strong connection to our past, he observes, something he thinks essential to a culture. “I mean, because a building is 300 years old, they don’t knock it down,” though there might be a very contemporary clothing store right next to it.  And, he says, we’re always in a hurry here, on our cell phones, thinking about what we should be doing next, rarely sitting al fresco with a coffee or glass of wine for an hour to simply watch people walk by, to contemplate “the wonderful theater of life.”

He chooses to photograph primarily in black and white and largely in France and Italy, but writes excellent short stories in any café on a silvery laptop. It’s how he begins most days: coffee, prose, perhaps thinking about what he’s going to discuss in class. “Teaching has to be interesting for me, as well as the students.” A music aficionado, he listens to jazz, Bach and Dylan with equal avidity (well, perhaps jazz wins out here); reads poetry and serious literature (some in slightly rusty Italian); and makes small tables and tiny boxes from exotic woods – the boxes to hold the collection of classy fountain pens with which he writes. (He even uses a typewriter–manual, of course.) 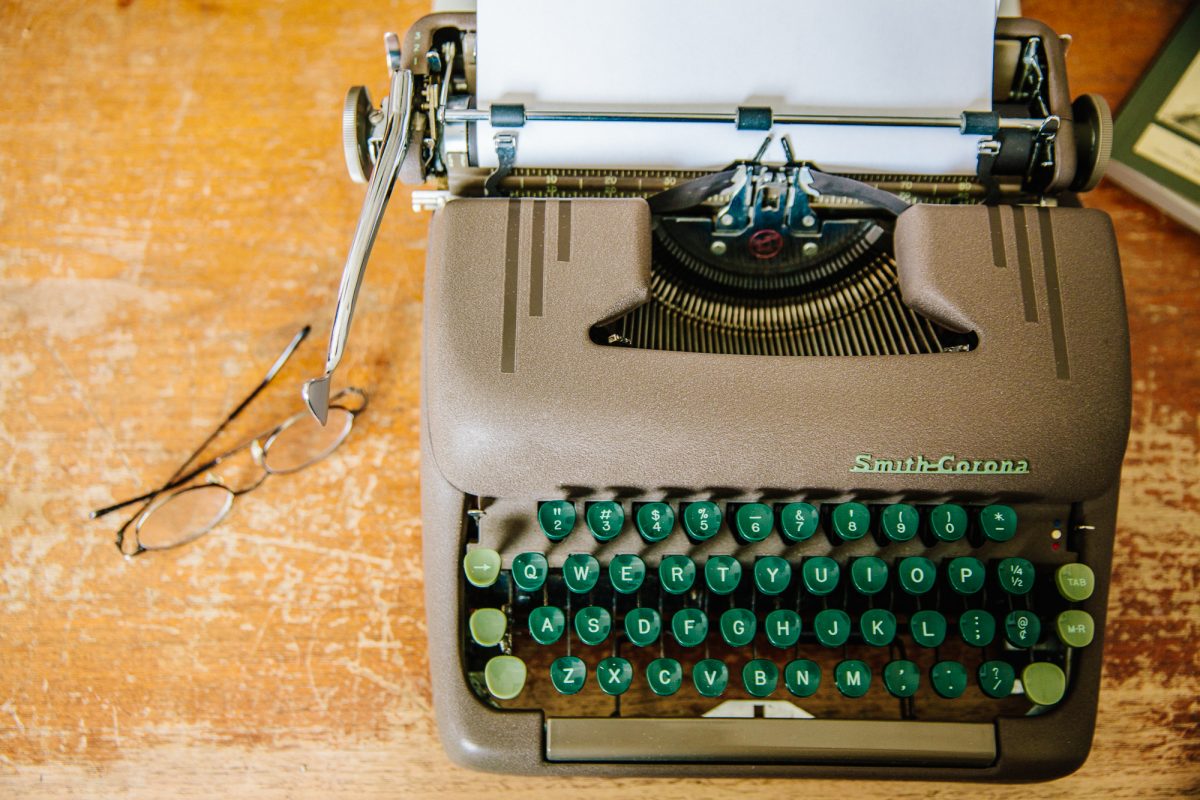 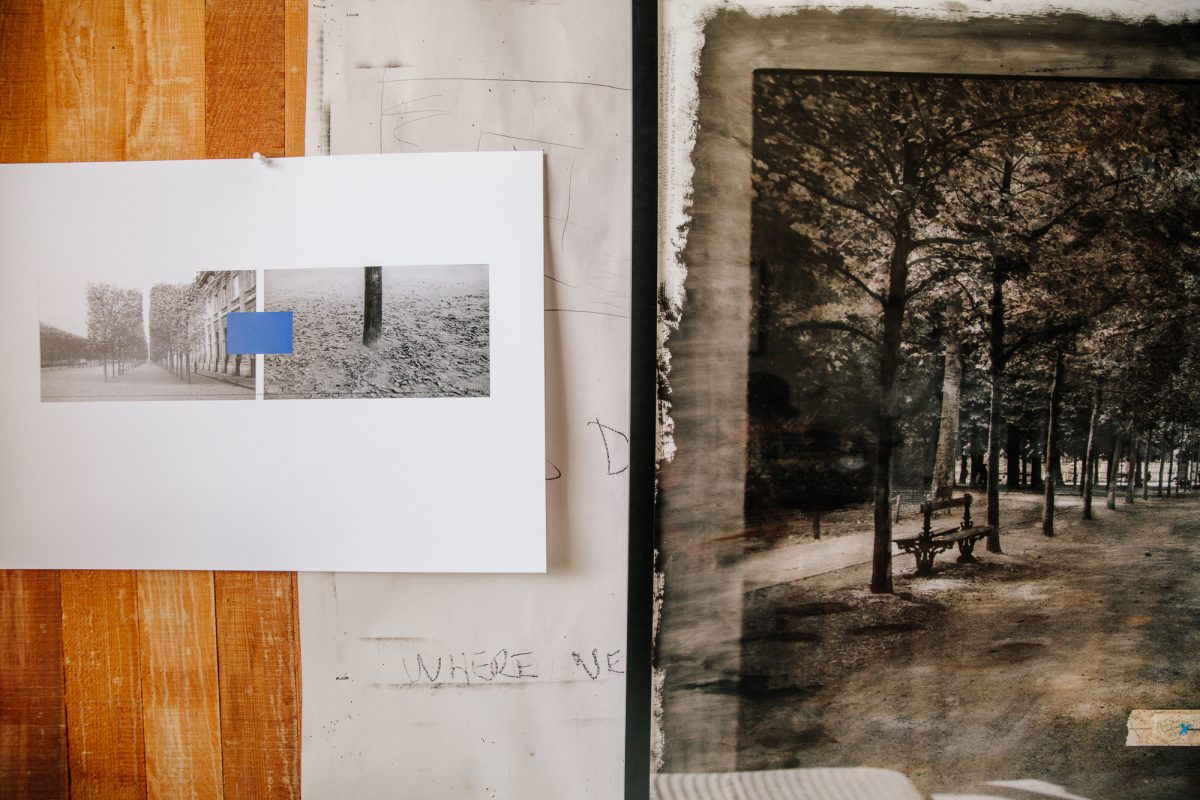 Thousands of students have been fortunate in Marotta as their professor since he arrived in 1978. Soft-spoken with intriguing observations to make about his art and the world, you want to capture every word. (I hope my tape recorder is doing so now.)

“I’ve always felt that students should know how to do black-and-white photography in the darkroom, they should know how to do color, they should know how to do large format, studio photography, alternative photography, so those are things I planned into the program. Now we have a strong digital emphasis. A lot of students enjoy going into the darkroom and doing black and white, silver prints, so I’m glad we haven’t gotten rid of that. A lot of schools have. Completely gotten rid of their darkrooms and replaced them with computer labs and now they’re regretting it because there’s kind of a return to darkroom photography. All the way back to people making daguerreotypes,” he says, referencing recent work of photo-based portraitist Chuck Close. “If you have the broadest knowledge base, then as an artist, you can pick and choose what you need for that idea.”

There is a lot to absorb in Marotta’s office – likely not as much as there once was. He is packing up today, mostly his many books, and acknowledges he will miss it here. At the time he arrived at the U, most university photography departments were located in basements. “When they gave me this office on the second floor with a window and a view of the Salt Lake Valley I said, ‘Oh, my god, this is my space? Look at all this natural light.‘“ He’s still thrilled about the window after 38 years.

“Paris is a photograph torn in half”

One enormous image of a European park above the couch demands attention. Another large photograph hangs at right angles to it. These, he says, are the last of his large-format images. He no longer will have access to a darkroom (it’s not everywhere you can do a 4’ x 6’ photograph, at least not in silver, he remarks) – and he doesn’t have an office at home, either.

Marotta creates dreamscapes in variegated black and white: an avenue of “manicured” plane trees in a formal Paris park with a beckoning bench or two. There’s a sparse bit of writing running across the bottom of the photograph regarding, among other things, two violinists playing in the distance, “swaying with each gesture.” A swatch of tape (French Ultramarine seems too clever – let’s just call it blue) unites the image with the photograph to the right of it, which simply depicts the lower third of a slender tree trunk surrounded by crunchy fallen leaves. The text continues its march along the lower edge and helps blend the two images into a sort of story for the viewer to parse together, to interpret what the images have in common, what they are of, what they mean.

He uses a variety of cameras, from an 8 x 10 view camera to a square format Hasselblad, but the camera he uses most often is a small 35mm Leica. “The camera really hasn’t changed that much since it was introduced in the 1920s. It has very limited control: depth of field, shutter speed, focus, that’s it. I can bring it up to my eye quickly, take a photograph and put it down. I shoot it and I know I have a negative and I don’t have to take any more pictures. I can go to Paris for a week and shoot two rolls of film and get what I’m looking for. With digital, people just keep taking pictures, so one of them will be good.” Marotta shoots digital, but treats that camera just like his Leica, thinking about the shot and typically taking just one. 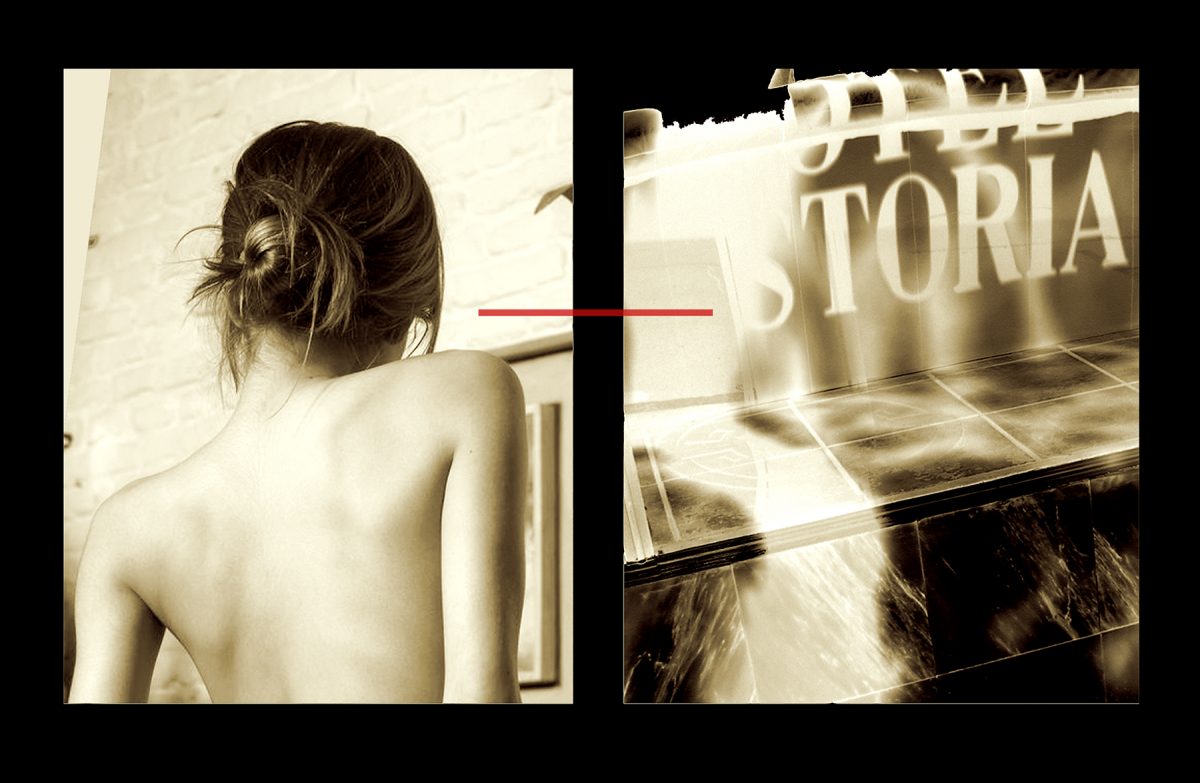 “I blame being an artist on my mother,” Marotta muses. “She’s the one who would take me to plays, who encouraged me to read, to go to museums, to the ballet, so I was interested in that kind of cultural world even as a 7- or 8-year-old. And she didn’t have to drag me to do that – I liked it.” He did some drawing and painting in high school but was really drawn to creative writing and literature in college.  “As writers you observe the world, you get your ideas from what you see  . . . It was the 1960s and there was a lot going on. And I just couldn’t write it down fast enough. The camera seemed to be another way to do that,” he recalls. “I found that I could do it so quickly and it had this immediacy and so that’s when I started photography, it was really my third year in college [State University of New York, Albany] and I got completely absorbed in it. I just loved it. I was maybe 21 and I just
photographed everything.”

“It’s the only thing that can stop time,” he continues. “And stop everything; that time and space continuum, and freeze it. Forever. And I think that the most important thing for me with photography is that it’s a medium that’s references are real life. When I look at a painting, I see a painting. And then I see subject. I don’t care what the painting is of. I see it as an object, a new experience on the wall. And then it becomes a narrative. But when I look at a photograph, real trees, a real table — that looks like rain on a window and we all know about those things, we identify with it. We know what a park looks like in the fall. It may not be that park, but we know what that is. It could be Central Park, it could be Liberty Park . . . but that meant for me that you could make an image that had meaning for whoever was doing the looking, so there was no one definition for a photograph. I felt that the photograph allowed just this expansive way of interpreting it because we’re all different. . . .I’ve done a lot of portraiture but I prefer photographing places that are common to people. Places of transit, places where people are kind of in-between, are on their way. “ 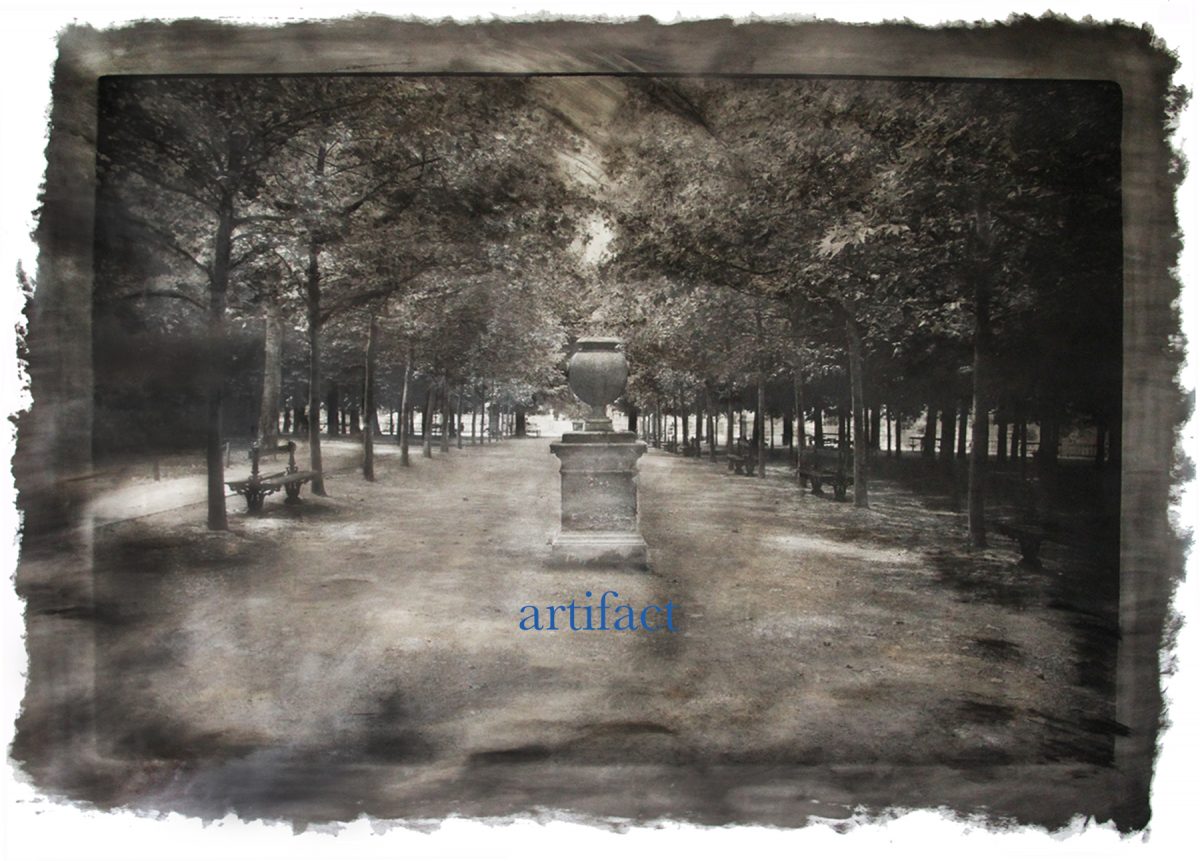 Narrative is important, he says, “but it’s not specific. In fact, I want it to be more and more engaging but in a fragmentary way. The viewer has to do more work. And I think that’s why I incorporate in a lot of the pictures: I paint on them, I stick things on them, like the piece of a map, I write on them . . . I’m taking fragments of written narratives and putting them in the photographs. They’re not meant to describe the visual information but they are meant to be sort of a part of the interpretation of a narrative. So if you have a fragment of a text and you have a fragment of an image, and a fragment of some found object, the viewer gets to build what all that means. It’s disconnected but it’s also connected. . . . If we see words on a page and we see a picture, we can’t help but link them. And I’m interested in that linkage, particularly between the written language and the visual language.

Edward Hopper is an early influence, photographically Walker Evans, Eugene Atget, Robert Frank and even Cindy Sherman – “though it’s all staged and has nothing to do with my work, I find it interesting.”

Marotta’s work appears in books such as Photographers of the West and Black and White Photography: An International Collection; and has been shown nationally and internationally including in Hamburg, Germany, and Taipei, Republic of China; and is held in collections in such places as New York; the Hayden Library at Arizona State University, Tempe (where he earned his MFA); and the Bibliotheque Nationale, Paris. 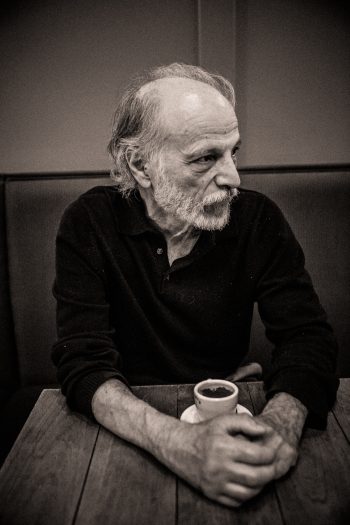 There are millions of photographs being taken every single day by people on their cell phones. And the iPhone 6 is extraordinary, Marotta says. “Photography is now a part of the way we communicate. It is a language. Much of the way we relate to each other and relate to the world is through photographs,” he observes.

“It’s strange. What used to be a practice that required some study, some knowledge, particularly if you wanted to gain expertise at it, at how you use a camera . . . it may not be very good, but today anyone can take a photograph.”