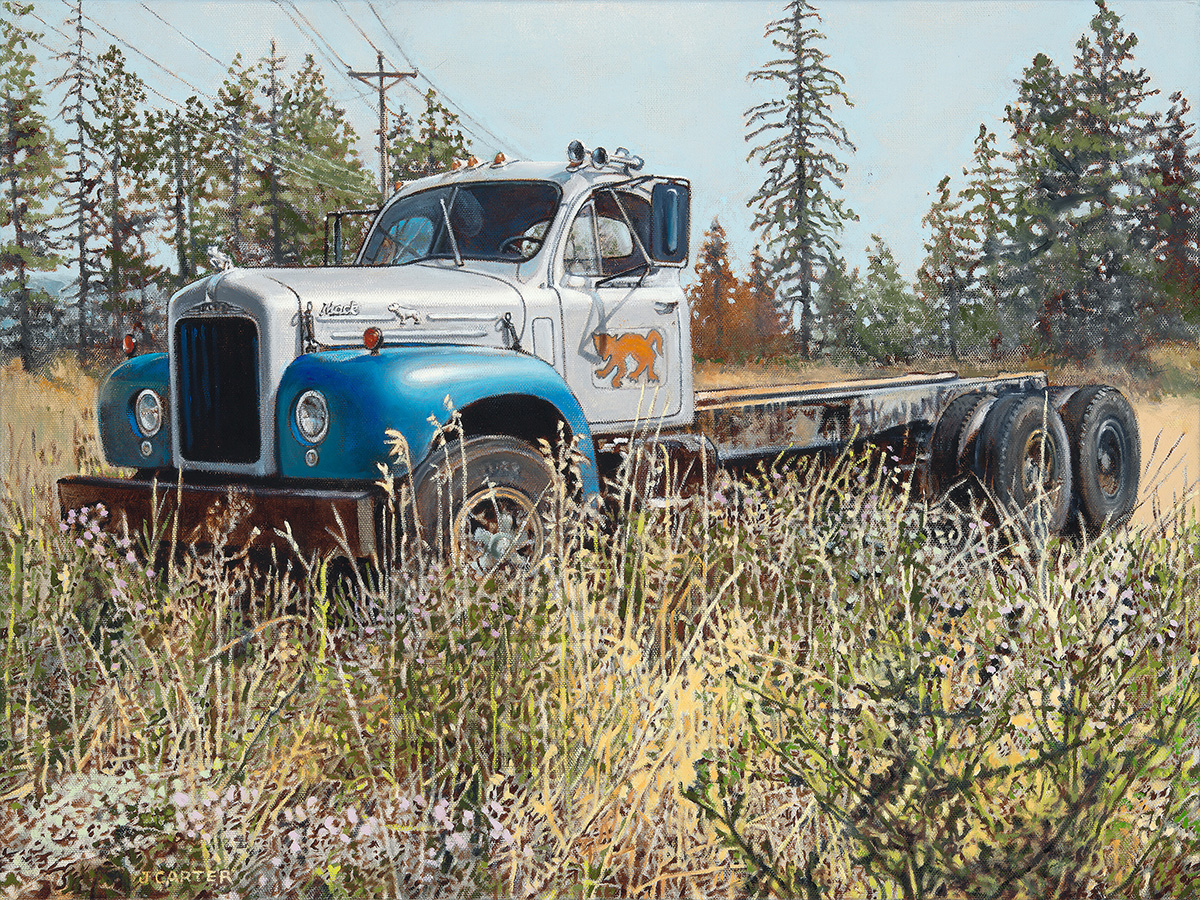 There is a perplexing mix of styles in the landscape show at Phillips through March 11th: stark collages by Liberty Blake and scenic works by Joe Carter don’t blend particularly well on the walls of the Main Gallery and disprove the usual idea that opposites can be attractively paired when the underlying concept is similar. It was a jarring walk-through until my brain made the necessary adjustments.

The show overall, though, is terrific: Carter has evolved from his previous painstaking toys and typewriters to landscapes, where he just can’t resist painting every single blade of grass in a field. Blake is making her first appearance at Phillips in some six years and her work, too, has evolved: it is deeply complex and far more self-revelatory with surprising romantic touches in a few pieces, as well. Plan to spend some time with them.

Though there is a lot of grass in Joe Carter’s new works, there is still plenty of the mechanical and manmade that has attracted the artist in the past, even if seen from a less closeup view. A standout is “Mack Truck,” a beauty of a vehicle with blue fenders and either a gold or a silver lion manifesting on the driver door and a hood ornament; its white-walled front tire is half-deep in yellowed grasses while the front two tires of the long trailer are buried in them. It is a magnificent beast set in a field before a variety of conifers and a telephone pole with thin, carefully painted wires in a nearly white sky. Lush and lovely. (Can’t believe I am writing these words about a Mack truck, but Carter has a way of making trucks and farm vehicles appealing.) In addition, there is a goggle-head-lamped “Tractor” with a fresh-faced young boy at the oversize wheel and a multiple-cabled “P & H Machine Shovel” running on a cog-wheeled belt complete with housing that is so typically Carter-detailed it is thoroughly enchanting. 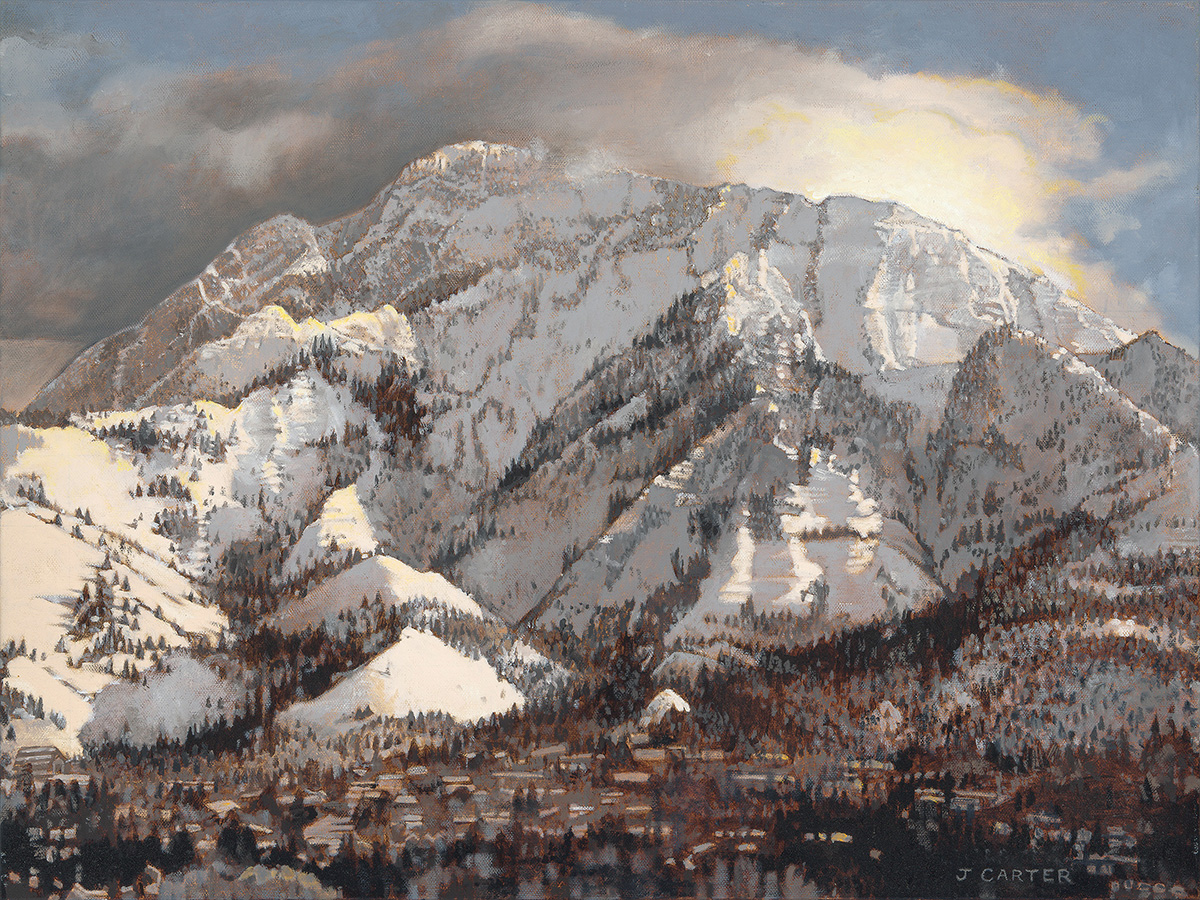 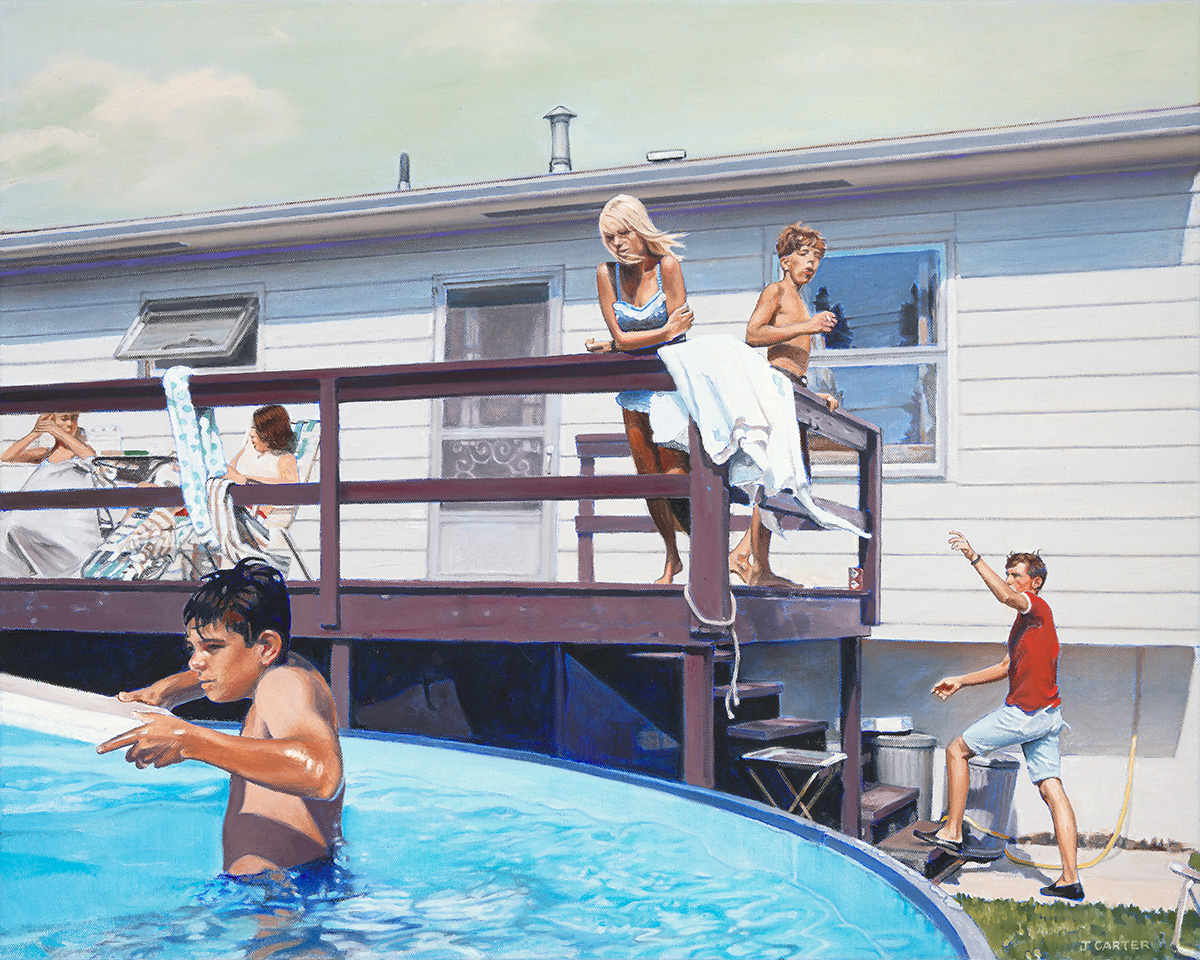 Other works by Carter have nothing to do with machinery, though like those works they are all oil on canvas and small for this artist – in the 18 x 24 in, to 24 x 30 in. range.  “Cathy’s Party (c. 1967)” is reminiscent of any poolside gathering in the 1950s and ’60s that teens attended (note the “blonde” girl – weren’t we all?), and is quite well-painted, while “American Gothic,” with its wonderfully branched trees but somewhat cramped house in comparison is less successful. The snow-covered “Mt. Olympus” is seemingly perfect and sold before the show opened; “Roadside Attraction,” of a grinning Tyrannosaurus (all those individually painted TEETH!) in a desert landscape with fluffy clouds and faraway mountains would be great for a child or teen’s room.

Teens were on the mind of Jann Haworth, famed artist mom (or mum) of Liberty Blake, when she suggested that a row of tiny collages be created and reserved for those “starting collectors” ages 15 and under for the regal sum of $25. (I don’t think they are checking ID, but the gallery director would not sell to me, and I had my heart set on the red one.) 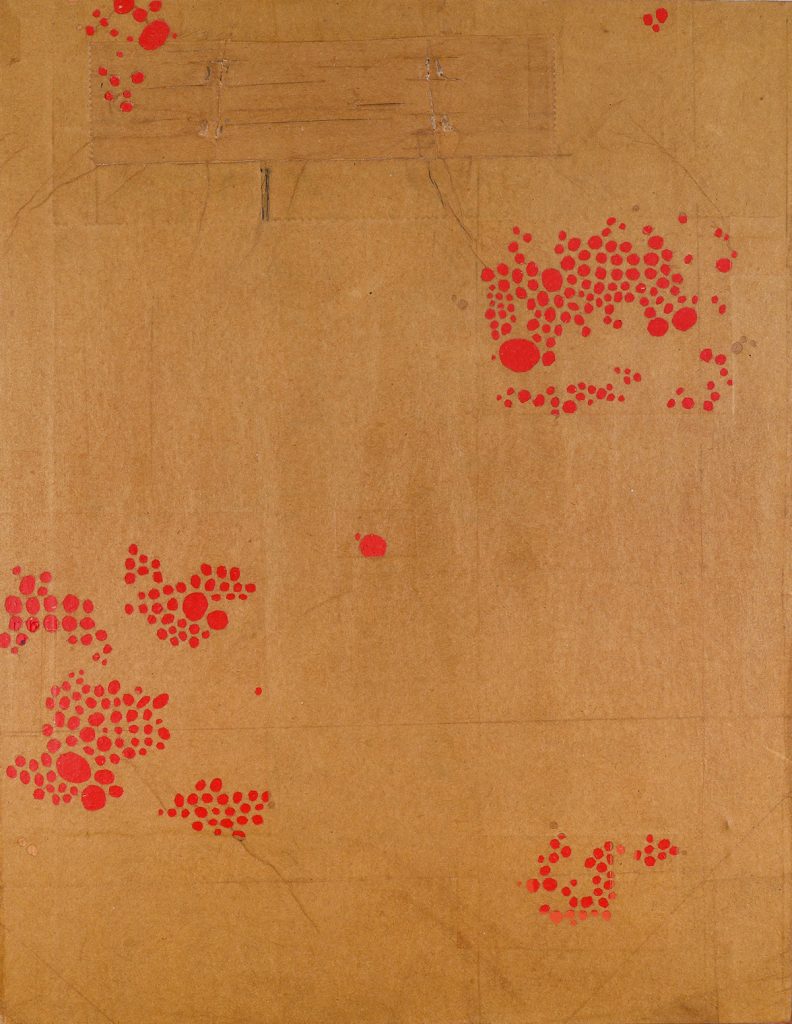 Blake’s collages are abstracted, usually landscapes, and infinitely interesting to ponder. She divides her works into various series, her most recent being Wildfire Series, based on the fires in California, and arising from her severe “irrational” childhood fire phobia. Each collage, she says, is based on “a specific fire that has impacted either a person or place of personal significance.” Some of them, she says, threatened her partner’s childhood home. While these collages are fascinating, in particular “The Kincade Fire,” depicted in groupings of red dots, and “After the Fire,” where wounds of a different fire appear to have healed over, the deeply personal Self-Portraits were the series that grabbed and held my attention.

Started in 2015, they are like a journal or diary, Blake says, describing an experience, memories, or feelings, but in a visual format. “These abstracted self-portraits are created to document particular situations or ideas associated with intense emotions that require an outlet.” “Self-Portrait — The Witching Hour” centers on a two-toned candle labeled HER. “Self-Portrait—The Deeps – Swallowing the Sky” features black cut-out houses or apartment buildings on two sides at the base (one is upside-down) with a shipping label going up the middle of the work that has bits that read Made in the U.K., Handle with Care, and an arrow indicating This Side Up. Other of her works that delighted were “PB’s Paintbox,” a smallish 18 x 18 in. assemblage hanging between the large north-facing windows, and the enormous, dizzying 66 x 48 in. assemblage “View From the Rock.” 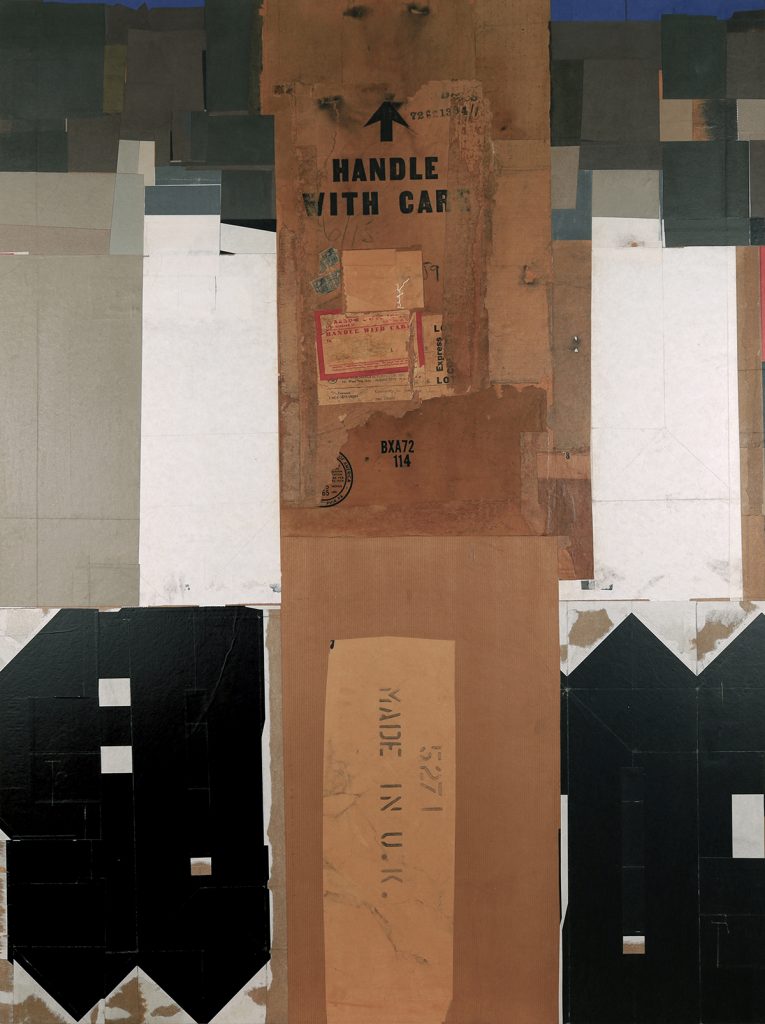 The contrasts in this show lie not only in the art but with the artists themselves. Carter, born in Montana but reared in Utah from early infancy, was an electrical engineer who would leave that field to get a degree in art, a lifelong desire he accomplished in 2000 with a BFA from the University of Utah. In 1974, he had USN Hospital Corpsman training at the Naval Hospital in San Diego, California, and earned a BSEE at the U of U in 1981. Blake, born in England to an artistic family, was a student in the experimental Looking Glass School, which emphasized arts and the environment, until she was 13, and later attended Sydney Place Foundation, Bath Academy, and West Surrey College of Art and Design in England before coming, in 1997, to Utah, where she co-ran the “Art Shack” at Sundance and made her first wilderness-inspired abstract collages.

Which would seem to prove that opposites can be perfectly paired in an artistic endeavor.