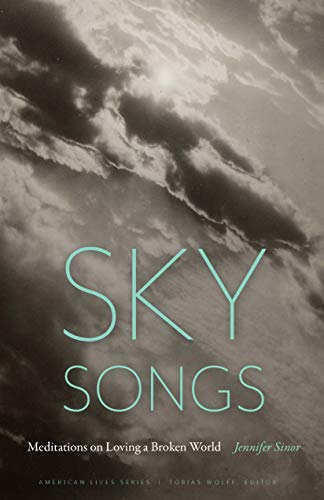 Sky Songs: Meditations on Loving a Broken World collects fifteen personal essays written by Jennifer Sinor over about that many years. The collection opens with “Headwaters,” an account linking a family death and a coincidental birth, one life ending and another continuing in its place. By comparison with those classic events, the book’s coda, “Hurt People Hurt People,” dives into one of today’s most urgent social themes: the impact of bullying on contemporary youth. Eventually, this memoir traces the author’s spiritual journey, beginning in error, loss of faith, and the premature end of one possible family, accompanying her through encounters with nature and the material world in “The Ground Below,” to her eventual discovery of divinity: “The Sky Within.”

Readers familiar with the strategies employed in modern literary writing will recognize qualities here that characterize our time. Her writing displays technical skill of the highest order: lucid, stylish, and at the same time, accessible. As a genre, the memoir found its most popular, indeed almost its only storyline, in a pilgrimage out from wilderness into self-discovery. So it does here. Each essay alternates between, and asks the reader to patiently hold in mind, events taking place at two or more different times or in separate places. This modern version of arguably the oldest device in literature appears as digression in Homer, the jump cut in movies, picture-in-picture on the TV screen, and so must surely answer a deep, cognitive need in ourselves to know more than we can perceive by ourselves alone.

The woman who emerges from Sky Songs is a world traveler, but in no way a mere tourist or spectator. Whether at Disneyland with her husband and two sons, or in Cuzco, Peru, on the way to see Machu Picchu, Sinor engages fully with every place she visits. In California, the necessity of driving brings up parking, the ethics of hotel advertising, and ultimately the sheer number of other people, which results in her encounter with a kind of passive, herd indifference to each other’s presence. But Sinor is an observer more than a social critic, and so she recalls Hawaii, where the water is warm, the jungle is alive and close at hand, and even the sand seems less like an industrial product. In Mumbai, she has been told, absolutely no one goes for runs, it isn’t safe, but when she asks at the hotel desk:

The manager, though, didn’t bat an eye, didn’t even pause. I couldn’t fully understand what he said, but it wasn’t “You can’t run here!” He has given me directions, and I clearly heard the word “beach.”

And so, after running in the dark through some of the most populous streets on earth, trying to memorize exotic landmarks in the hope of finding her way back, she arrives at a beach, where:

At the end of the tunnel of trees, I emerged on the Arabian Sea, a sweeping expanse of ocean reaching in all directions . . . . The sun, now up, threw beams of orange and yellow across the waves . . . . The sky matched the sea in hue.

Scores of Indians were out exercising on the broad promenade. True, most of them were walking, most wore saris or long pants, and no one was dressed like I was, but they were all out there . . . . I crossed the street and and merged into the throng of bodies . . . . no one even questioned what I was doing.

Not every Utah reader will appreciate an author who sees their state with an objective eye, daring to compare her home for these last thirty years to the home of the Dalai Lama. For others, though, those who have not and do not feel fully at home here, she captures some things felt, but not easily put into words:

Moving to Zion after graduate school should only have served to confirm my atheism. Living in a theocracy, having your home address determined by your exact distance from the Mormon Tabernacle, impels you to mark yourself as other: tattoo your knuckles, bare your shoulders, visit the state liquor store frequently, bring your coffee with you to teach. When the majority around you belong on the inside, you begin to take pride in your outsider status. You don’t want anyone to mistake you for anything other than Other.

One of the well-known, but by no means universal experiences newcomers to Utah report is the feeling of being less than welcome. More common, though, is being welcomed generously by those who, the visitor realizes, are inwardly congratulating themselves for being so gracious. Both of them might profit from exposure to a discerning and ultimately humane critic. Then everyone can forget who is an insider, who an outsider. After all, as Jennifer Sinor replies to her own confession of alienation:

You walk outside the door every morning. And the mountains lift their shoulders toward the sky. The sun rises from behind the peaks and throws limbs of light to the ground that seem solid enough to scale. The air smells of pine, and the flowers that arrive in the spring are so hard-earned you crumple at the sight of their fragile heads. The poet asks, why this and not something else? You find it hard to cling to the sterile shore of atheism when nurses lay your heart next to your newborn’s head, and the world arrives not as a void or darkness or rubble but as a mountain ash with limbs that fountain fifty feet above your head and leave you in its shade.

“Clouds alone,” (my  husband) once told me, “are proof enough for me of the Divine.”

Sky Songs was published in Lincoln, as part of the University of Nebraska’s America Lives Series. But in its achievement of breadth and depth, it could only have been written, because it could only be lived, in Utah.