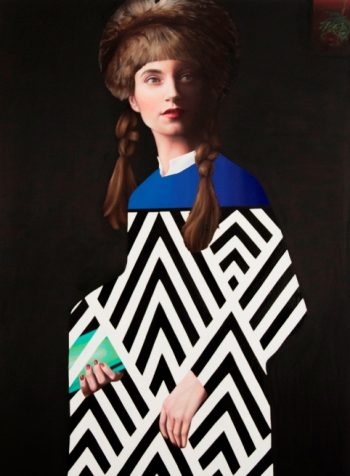 What if women were the pioneers of the West? Would our relationship with Native Americans be different? What about our impact on the environment? What would our society look like today had our region been founded under a matriarchy?

These are a few questions raised by Jennifer Nehrbass’ exhibition, Pioneer Project, at Julie Nester Gallery. The cohesive series represented in Park City consists of eight female portraits and six landscapes, which together tell a fictional narrative that brings up real questions. For Nehrbass, the project doesn’t necessarily push a political agenda; it simply aims to tell a story while sparking an intriguing dialogue.

“Generally, when we walk into a museum of the West or exhibition of Western history, we see the same thing,” says Nehrbass. “There are large portraits of generals or male explorers, heroic and overly romanticized landscapes painted by men, and then a few artifacts. Which made me think …what if women were the pioneers? What would this look like?” 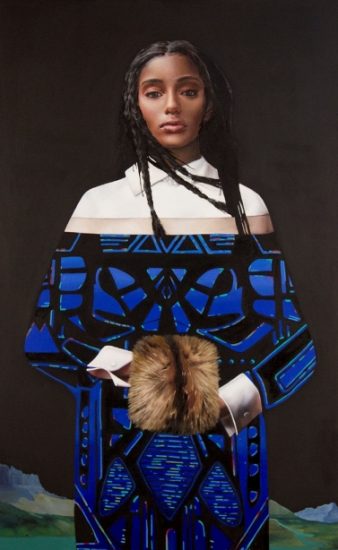 Nehrbass’ portraits blend elements of hyperrealism, graphic illustration and textile design. The face and hands of each woman are rendered realistically while the bold clothing and overall composition has a flattened perspective. The portraits are about 48” x 30” in size, giving each woman a lifelike scale as she fills the canvas and levels with the viewer. The women are a blend of modern-day styles and Western motifs: some wear fur while others don wide-rim sunglasses; one wears prairie-style braids while another lets her platinum-blonde hair flow free. There is a distinct fashion-ad feel to the compositions as the women are shown with painted nails and pouty lips, with their clothing boldly patterned in Art Deco designs or solid blocks of color. These geometric shapes and saturated colors pop against a stark black backdrop for a moody, chiaroscuro effect.

In addition to her portraits, Nehrbass paints a series of landscapes depicting idealized visions of the West. Working from photographs and a collagelike process, Nehrbass draws inspiration from a mountain in Austria or lake in Montana, merging the images into a contrived landscape. From a distance, the compositions flow seamlessly while closer observation reveals unexpected stoppage, blurred details or mismatched colors. There is something inexplicably “off” about the reality of the scene, which emits an idealized, Garden of Eden quality. Several pieces contain evenly lined rainbow stripes connecting mountain vistas or open valleys. “I add in the stripes to remind the viewer that this is a completely contrived atmosphere, but still makes you want to be there,” says Nehrbass. 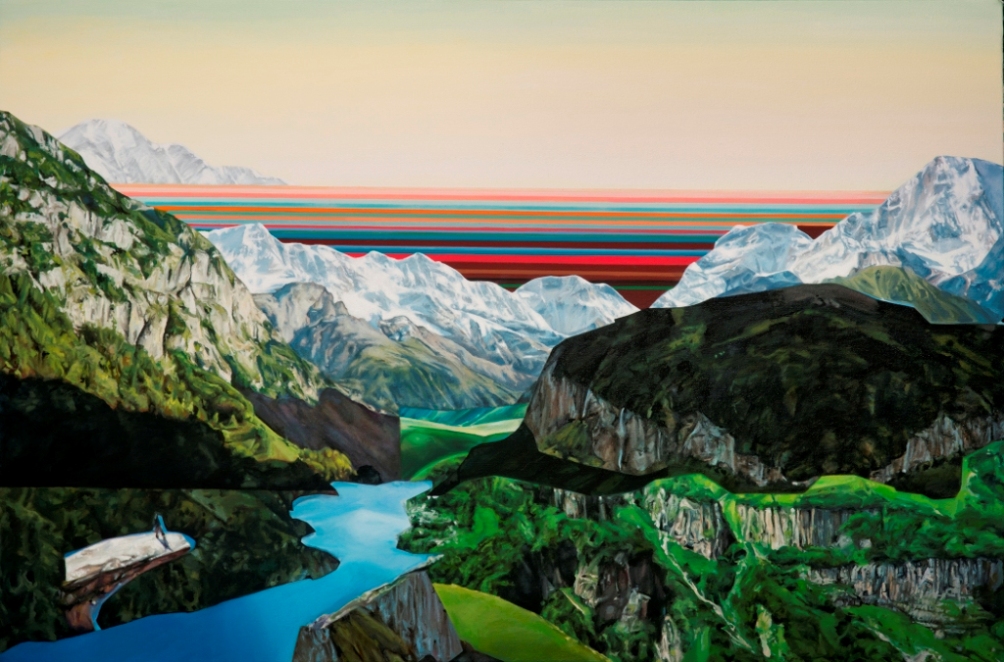 Through her depictions of an idealized West, Nehrbass references the Hudson River School, which went down in history as a male-dominated movement that started in the Northeast and eventually spread west with painters like Albert Bierstadt and Thomas Moran. These artists depicted the landscape with drama and grandiosity as they were drawn to untouched and pristine visions of nature. Their paintings were heroic and dominating; Nehrbass’ works, while also representing the idyllic, have a softer touch and brighter, more feminine feel. “This is the idealized West that these women envisioned,” she says of the landscapes.

The assembled visuals in Nehrbass’ landscapes, along with the bold patterning in her portraits, stem from the artist’s first career. Nehrbass went to school for fine art and textile design, which included a semester abroad in Italy and then a year at the Fashion Institute of Technology in New York. After graduating, Nehrbass landed a job at Ralph Lauren where she worked for 10 years as a design director in the Home Collection. According to Nehrbass, her role as a designer was more like a visual storyteller as she developed collections based off sourced material that revolved around a devised theme or concept. “If I wanted to create a collection that had the feel of an old English manor, for example, I’d resource photos of antiques, find an old pillow or beautiful piece of fabric and put them together in a design board. This created a mood or conversation around the idea.” 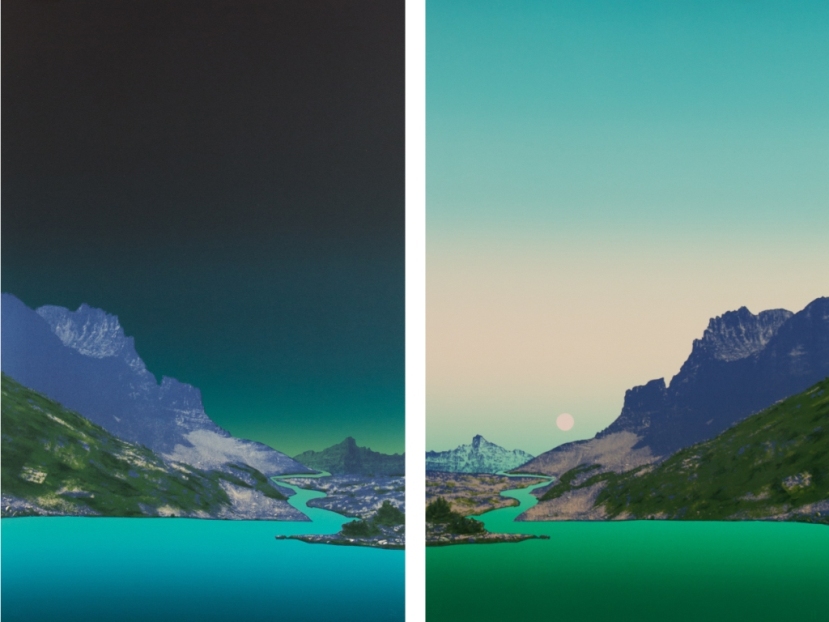 While storyboarding doesn’t exactly play into Nehrbass’ current creative process, she still has a wall in her Albuquerque studio where she pins inspiring material. If there had been a physical design board for the Pioneer Project, it most likely would have been a unique combination of Valentino fashion ads, Art Deco patterns, and passages from Willa Cather’s book, O Pioneers! which Nehrbass was reading at the time she started the series. In this 1913 novel, Cather wrote about frontier life on the Great Plains and the hardships of immigrant families. Nehrbass was drawn to the way Cather describes the vastness of the Western landscape that inspired a simultaneous sense of liberation and fear for the pioneers. These warring emotions show up in Nehrbass’ figures, whose wayward gazes are often caught between peace and anxiety. While not explicitly defined, the women’s ethnicities vary as their skin shifts from light, to olive, to dark tones, representing immigrants of various cultures. 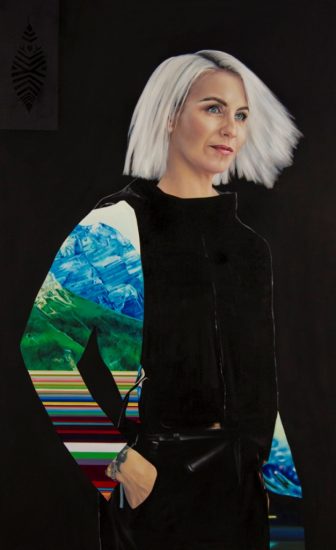 At Julie Nester Gallery, Nehrbass’ pioneer women hang evenly in a row, engaging with one another as much as they engage with the viewer. Together, they conquer unknown lands in ways that will shift the course of history and forever alter the future of their population. Viewing the portraits in this way sparks another question: How can women in powerful roles work together to change history? Perhaps Nehrbass’ narrative isn’t so far-fetched after all, since recent elections brought a record number of multicultural women into leadership roles for our country. Maybe now, we’ll begin to see the long-term effects of women’s perspectives and unified voices. “Maybe this will be the moment that we make change,” muses Nehrbass.