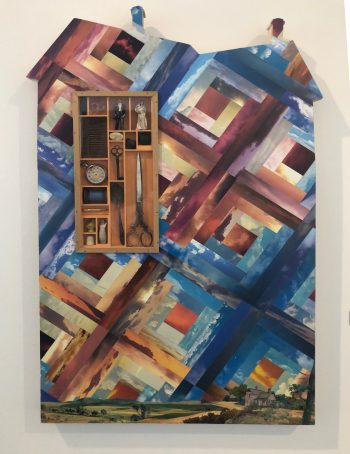 Jason Lanegan’s “Ancestral Reliquary II: Sylvina Belle Frohlich” could be described as a geometric assemblage that, hanging on a wall, establishes a context that literally connects it to architecture. The reference is underscored by hints in its shape: complex, house-like, but initially disorienting, not least because of the collaged, abstract forms that cover its surface. Arranged in the familiar Log Cabin quilt pattern — another architectural reference, this one domestic and crafts related — the blocks are cut from numerous images of the sky taken at symbolic hours of the day. In other words, here the sky, as it always should, evokes the passage of time. The key to the confounding shape can be found at the bottom edge, where this quilted sky drops behind a bucolic rural landscape, in which a house nestles. The roof line of the house matches the upper parts of the assemblage, from its two chimneys to its generous eaves.

Although the overall assemblage is essentially flat, the alternately light and dark quilt blocks create visual illusions that lend it a cubist effect. Cubism, the art of shifting perspectives, is yet another reference to time. Another architectural requisite comes with a window opening into an interior. But it’s not the interior of the house, nor does it belong with the overhead roofline. Rather, it restores the order of business here, for as Lanegan has explained, this, like most but not all of his artworks, is a reliquary. As such, it begins, first and foremost, as a kind of box. He rightly makes such objects to hold and display objects precious to him for their associations. So it was a pivotal moment in his artistic education that occurred when he realized that a box that holds something precious should consecrate, rather than conceal, and connect with its contents through its viewers’ imagination. 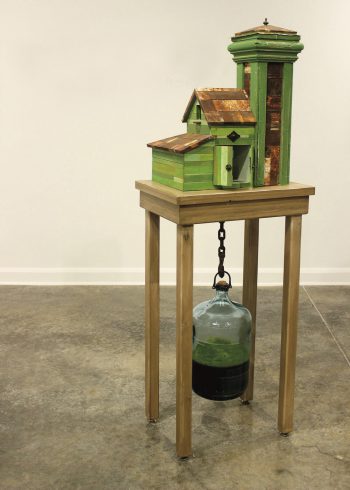 Lanegan has been a well-kept secret among Utah artists for some time, now. Though known to the state’s three central, arguably leading art schools — BYU, UVU, and Snow College — and a frequent exhibitor at peripheral galleries, where small, often group shows give less-commercial artists the deeper viewing they deserve — Bountiful Davis and Alice among them — Lanegan has chosen not to aggressively pursue notoriety. His reasons may be partly practical; like many artists whose work reaches his level of personal and community connection, his work probably finds homes with lay art lovers, rather than professional collectors used to loaning them out. Other reasons may be personal, and precisely because they are personal, don’t belong in a public review. Either way, those who can make the journey to Ephraim are obliged to Snow’s Adam Larsen, a longtime ally of Lanegan’s, who persuaded him to bring together forty-five of his mixed media objects for what, were he not still a relatively young man, would make up an impressive retrospective.

Placed among so many objects, which range through, and obscure, the distinctions between sculpture, assemblage, printmaking, collage, and installation, Lanegan offers the following apologia for one of them, while in reality speaking for them all:

The question is almost inevitable, “where is this soil from?” My answer is, “does it matter?” Cannot the soil from my backyard be considered sacred?

In asking this question, Lanegan is in sync with the versatile poet, farmer, essayist, and environmental activist Wendell Barry, who has criticized the view that the world should be, or even can be, divided into the sacred and the mundane. Rather, he argues that “There are no sacred and un-sacred places, there are only sacred and desecrated places.” Lanegan and Barry’s shared view, that the sacred can be found anywhere it has not been desecrated or expunged, empowers Lanegan as he seeks to reveal the unseen, or overlooked, yet divine dimensions of family life. Throughout the body of his work, his conviction that his subjects are saints, holy places, and consecrated objects empowers him, like the medieval craftsmen (and early immigrants to Utah) who regarded their labor as nothing less than prayer, to demonstrate an uncanny level of quality craftsmanship in every aspect of his artmaking. 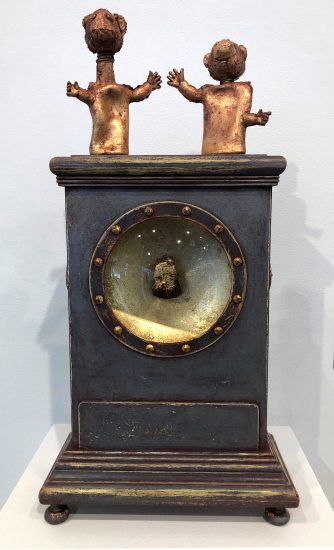 Not all of the objects showing at Snow are reliquaries, though all evoke memories of one sort or another. Some of the most engaging and impressive recall trips abroad with the artist’s family, incorporating maps that hearken back to the days before GPS, when travelers could not only contemplate the big picture, but memorialize their travels with pen and ink. A favorite uncle is recalled by a mixed-media sculpture topped by his photo. In such works, a viewer can clearly discern what elevates Lanegan’s power of recall above that of some other artists who use found objects as a memorial device. If an artist, having purchased an item in an antique store, uses it to invoke universal feelings and experiences, it’s an honest, but essentially fictional work. On the other hand, to place it in a reliquary would be dishonest, like putting a chicken bone in a saint’s memorial. Lanegan’s specificity gives his details uncanny precision; he appears to have collected his raw materials where and as he lived the events they recall, and each object is as uniquely connected to its theme and subject matter as we might wish every artwork were. 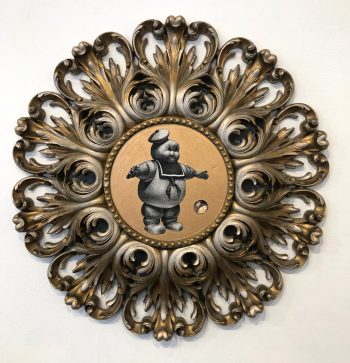 In addition to those reliquaries containing small, meticulously collected objects held internally in shadow box-like windows, others contain only a single object, often a particularly ironic commentary on the personal, even private nature of the sacred: a piece of a sandwich in “Summer Picnic Relic,” or a crusty morsel in “A True Piece of Sticky Campfire Treat,” where the identity of the “treat” is confirmed by the presence of the Stay Puft marshmallow man. If this sounds irreverent, viewers may take comfort in a convert’s fidelity to the LDS Church, which, as if often the case, carries with it more self-awareness than some lifetime members display. In perhaps the most sophisticated pieces, what appears to be a single object turns out to be a collaged-together ensemble of elements that only appear, to the casual view, to be a single object or picture. 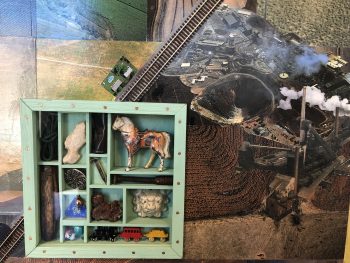 “Relics from Along the Line,” collage and assemblage.

The rich tapestry of Jason Lanegan’s life is memorialized in his art with an appropriately varied notion not only of style and technique, but of attitude and approach. Whether it’s reverent or gently mocking, full of love or full of fun, it makes surprisingly effective use of truly mundane materials. Their often childlike origins, uses, and effects are entirely appropriate, because it’s in childhood that we have the most faith: faith in our beliefs, but also in our families and even ourselves. Not just anyone would share his conviction that small replicas can be the most credible, but then Lanegan is simply showing off the power of the reliquary. If a mundane object is to be seen for the holy relic he believes it to be, it’s up to the artist to build a box that doesn’t just contain it, but makes clear how unique and plangent with meaning he finds it to be.