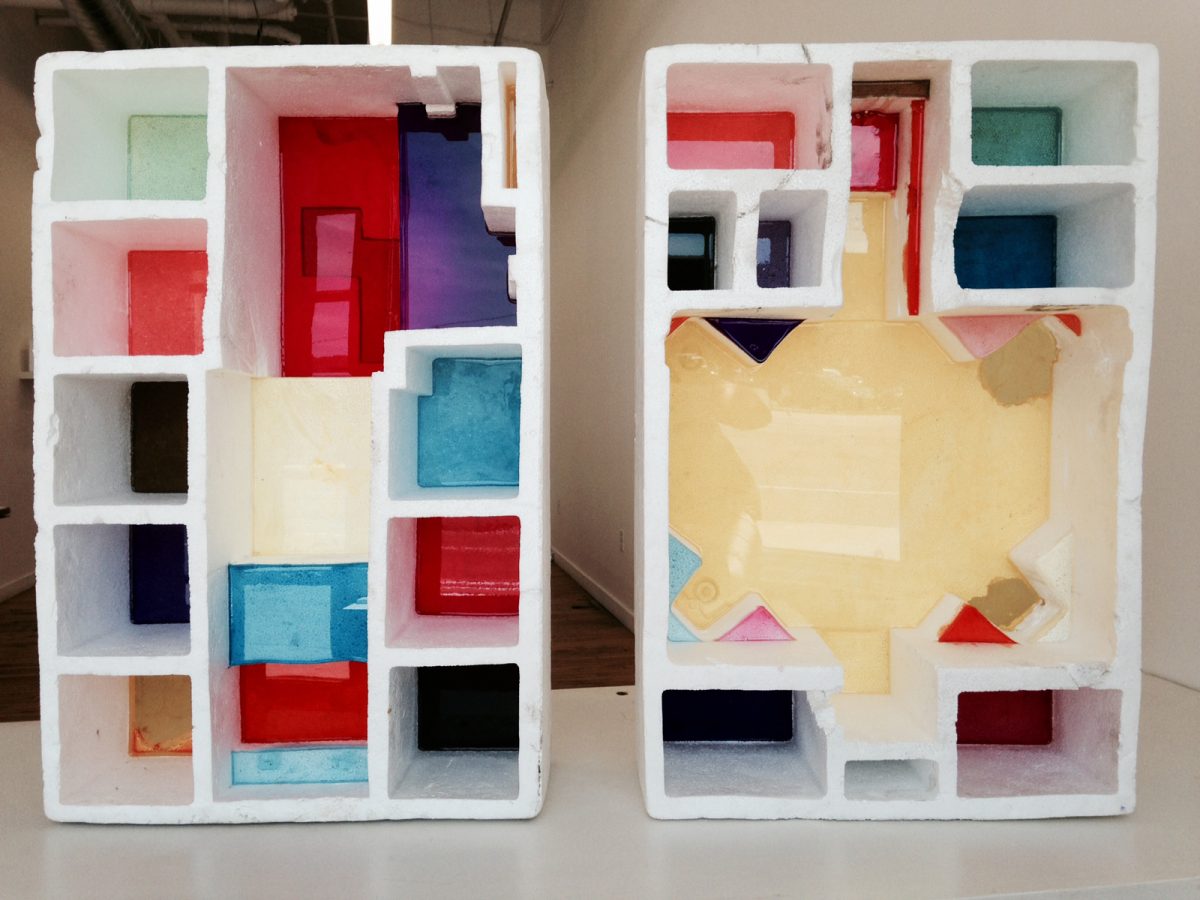 The nature of perception, the artist’s vision and viewer responsiveness is a topic that concerns all of art, in every facet, from every place and time, from every artist, and from every viewer.  From a visitor to a gallery or museum in Salt Lake City to a pedestrian standing in front of a public sculpture in a piazza in Torino, Italy.  The subject is one that is currently brought to the fore at Salt Lake’s CUAC with Jared Lindsay Clark’s and Makia Sharp’s individual shows Seer Screens and Passing: both question the notion of making and looking, and the transportation that is art’s reality known as “response.”  The evocative art objects in both shows are such that they cause the viewer to pause and to look, to then consider what they are looking at, and in the event that they are sensibly connected to the piece, the phenomenon of transporting we call “responsiveness” is the result.

Clark, a recent Utah Arts & Museums Fellowship winner, is an artist familiar to most in the region who are knowledgeable of the most forward or “on the cusp” contemporary artists.  He is an artist who satisfies his audience on many levels, most significantly the conceptual, intellectual and the sensory. Sharp recently graduated from BYU with a BFA in painting, and her work, much of which was on display at BYU earlier this year, will be a pleasing and a welcome experience for those who desire the most forward or “on the cusp” of contemporary artists.  As it happens, although their works are different in formal content and conceptual approaches, the pairing of the two is a pleasing one, their outer regions of philosophical leanings being in tandem, and one finds a synergy between the two after thoughtful investigation.

Sharp’s installation requires less of a penetrative effort, and one might glean from her work this philosophical outer crust without too much effort and much pleasure.  One of the most enjoyable of the show’s installed pieces is “Untitled.”  A closer look at what initially appears to be a pile of stone rubble, reveals beautifully smooth and polished cast-cement, gem-shaped structures of various sizes and dimensions.  Already, the viewer, in an act of looking and considering, has been transported.  A pile of rubble has been seen, and then a closer examination reveals what it actually is.  After this looking and consideration, for the viewer to see the beauty and find artistic appreciation in a pile of concrete, is a sensible responsive act of transportation on various individual levels.

Above this piece is “Haze,” a hazy yet transparent sheet of Mylar, behind which one sees a seemingly floating rectangle of lavender. A slit in the Mylar sheet reveals that the rectangle is a gradation from white, at the top, to pure lavender at the bottom. Here again, the viewer has looked, considered, and has been transported. It is no incredible feat of perception, but a serene and beautiful symbol of the act of the elemental processes of viewer perception and responsiveness. The same can be said of all acts of perception throughout the installation, which varies from video installations to framed sheets of concrete.

As there is so much difference in each of Sharp’s installments, the task is a more apparent one.  With Clark, and a room of objects that transcend the boundaries of painting and sculpture into one, the dynamics are different, and fantastic. Each of his “Seer Screens” is a Styrofoam box with a glassy plane of lucidly-colored, transparent epoxy silicon resin.  In the case of the polyptych “Primary Boise Sunset Set,” there are a set of four similar boxes, but the glassy resin is distinct in each.  Here, one can see how Clark achieves the most extraordinary color effects in resin as majestic as stained glass windows, yet without context, and purer.  Here hues melt into each other in various schemes that cause an immediate connectivity with the viewer and the primordial human sensibility that thirsts for color.

As one begins to investigate Clark’s “Seer Screens” and looks into each box, one finds one’s self transported within a beauty contained therein — unlikely color and an apparent magic within each.  And certainly there is a bounty of magic in these “Seer Screens.”  In theory, Clark has conceptualized two ideas. Firstly, a contemplation of transcendental, mystical aspects of spirituality, and the second, a play on the phenomenon of computer and television monitors that permeate culture. And this may all be digestible to the cognition of the viewer, considering the fundamental act of perception, which allows cognition to occur, making full engagement possible.  Looking, considering and transportation (responsiveness), in this case, is not a three-tiered process, but as mentioned, a momentary, immediate one as, one begins to find one’s self transported within the beauty contained therein.

The nature of perception and the artist’s vision as well as viewer responsiveness is a monumental subject that can be better understood through examples of the phenomena, as elucidated so poignantly here, in the cases of Makia Sharp and Jared Lindsay Clark. We have seen how Sharp’s art is a direct allusion to this philosophical orientation, while for Lindsay Clark’s work, like all art, it is a fundamental aesthetic, achieved in a glance, a moment, and the viewer then focuses on issues relevant to perception that further cultivate sensible responsiveness for the viewer.

Jared Lindsay Clark’s Seer Screens and Makia Sharp’s Passing are at the CUAC through July 12.