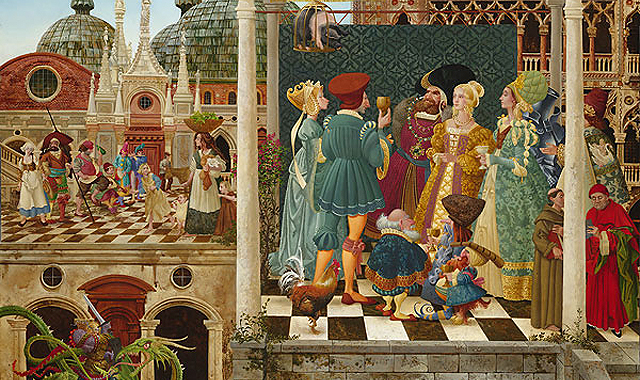 Down the Rabbit Hole
Following Three Artists Into Their Burrows
Part I
Curiouser & Curiouser: The Artwork of James Christensen, Cassandra Barney, Emily McPhie, and Familyincludes sixty paintings by the three artists in the primary exhibition, with dozens more incidental works in the area set aside to represent the family milieu on which they draw. These latter include works by family members, portraits of their children by the headliners, and favorites retained by the family the way Leonardo kept the Mona Lisa. If the impact of these rooms is to enkindle a feeling for the integral role of their extended family in the output of the artists, the five dozen works in the main rooms overwhelm the critical faculties, as the eye turns from the impression made by one work, only to immediately encounter another waiting to be figured out, until the effect is like strolling a gallery of European masterworks, while a kind of optical triage is performed. “Oh, this is a favorite!’ ‘I don’t know this one, but I like it.’ ‘Another of these: different, yet familiar.”

There’s a good chance that previous judgments will be revised. James, Cassandra, and Emily are distinct enough to permit separate evaluations; falling for one, or two, but not all three is possible. Yet after seeing so much of them together, it’s clear that character, not skill, distinguishes them. A supplemental virtue of the family rooms is that nothing is labeled individually, thus proffering a kind of final exam. One can go through, guessing which is which, and then check the key for the correct answer. Personal vision trumps individual ability, if only because the latter is so universally high.

If there are too many objects to take in all at once, the Springville Art Museum, with its cozy domestic atmosphere and free admission, invites longer and more frequent visits. Too often in museums, one can take away nothing but memories. Here, not only is non-obtrusive photography for personal use permitted, but the gift shop has a rich selection of postcards, books, and signed, collectable prints provided by the commercially astute artists. Meanwhile, for those who have already chosen affection or scorn, this is a once-in-a-lifetime opportunity, either to seize or avoid, while a critic arrives too late—or too soon. What follows, then, is for those who wish to look further.

The obvious parallel for James Christensen—a parallel that rewards reflection—is with Norman Rockwell, another standout figurative painter, and one whose success with the public delayed, but could not stop, his recognition by the art establishment. Rockwell painted during the later stages of an unparalleled, popular American literary and artistic renascence, enjoying a near-monopoly on one of the most conspicuous artistic showcases since the official portrait of the Roman emperor. No artist or illustrator in Christensen’s lifetime has enjoyed a pulpit comparable to Rockwell’s decades-long, weekly appearance on the cover of the Saturday Evening Post, and it is that opportunity, not talent, that primarily distinguishes them. Yet they each made choices, and the differences between them illuminate their intentions. Both share a gift for capturing not only emotional expressions and mental states, but a deep feeling for character. While neither demonstrates a strong grasp of tragedy, or concern with evil, that’s probably more a matter of disposition: these two born comedians prefer light-hearted, humorously instructive ways of telling a story.

Since the death of Isaiah Berlin, it’s become popular for critics to divide the world, as he did in writing about Tolstoy, into hedgehogs and foxes. Foxes, according to Berlin, know many things, while the hedgehog knows one big thing. Extending his metaphor, we might say that each Rockwell painting is a hedgehog. Consider how, in each iconic Post cover, an episode or anecdote takes form in a single action that organizes and drives the painting. Boys carrying their clothes, fleeing an unseen but vividly implied pursuer, run past a ‘No Swimming!’ sign. A grade school tomboy waiting in the principal’s office, her disheveled appearance and shiner evidence of her transgression, breaks out in an unrepentant grin of triumph. Each of these keenly observed, atmospherically complete vignettes gives us all we need to know to enjoy a universal human experience.

By comparison, Christensen’s paintings are foxes. “Michael the Archangel Battles the Dragon While Almost Nobody Pays Any Attention,” like Brueghel’s well-known “Fall of Icarus,” must show us the wide world full of mundane activity, each individual scene as fully meaningful, and as important to its participants, as the overlooked defeat of the dragon is to Michael. In fact, some aspects of Brueghel are useful keys to Christensen, who likewise fills each of these glimpses with indulgent visual commentary on the foibles of human nature. Both painters like to challenge the viewer, presenting crowds and multiple vignettes in a single canvas and inviting us to sort and identify them. Brueghel gave visual form to proverbs; Christensen gives us “Faery Tales” and “Superstitions.” His familiar Elizabethan images, “Shakespeare’s Island” and “All the World’s a Stage,” each presents not the emblematic moment of a single play, nor the image that distills the playwright’s overall genius, but exemplary moments from as many plays as possible, an unlikely, staged visual puzzle that turns isolated viewers into a community of enthusiasts.

Where Rockwell telegraphed his punchlines, which was probably necessary given his large and diverse audience, Christensen’s point is always more subtle, more like a wink, which makes his scenes feel poised, as if the action might just begin in earnest. Take, for example, “Tales From Timp,” perhaps the piece de resistance of Curiouser & Curiouser. Here an entire encyclopedia of imaginary characters, drawn on illustrative sources from Botticelli to Burne-Jones, listen raptly to a story being told in a forest drawn from Shakespeare, each as much posing for our pleasure and identification as they are waiting for the next word from the storyteller. Spread out beneath a glimpse of the title peak, some blend into the foliage so well we can’t be sure how many there are. Only three look distracted. A cat—in context perhaps a Christensen family pet—retains its nature, ignoring everything but some potential prey. A child, perhaps likewise an actual grandchild, looks over a shoulder to see what the storyteller sees. And the central figure pauses, his finger raised to make a point, his distraction revealed by a glance to the edge of the clearing, to us: to those witnesses from another world who have stumbled, uninvited, upon this theatrical event. Suddenly, the reality of ‘audience’ is forced into the open. It is we who are the aliens here, we who must see how far we have removed ourselves from both the natural and narrative worlds.

Art is a place where individual strengths are often the flip side of personal limits. To the extent that he has devoted his considerable gifts to fantasy, to untrammeled imagination, Christensen has won an enthusiastic audience who view art as a vital supplement to reality. What any artist does best is made to look easy. In the seeming effortless way Christensen deploys dozens of figures, each a flawlessly created miniature with a unique face, dress, and manner of acting, he measures himself against one of his major influences: the Northern European masters he acknowledges in works like “Self-Portrait of the Artist Run Aground in a Flemish Landscape,” “The Rhinoceros,” and “Who T.P.’d the King?”

At this point, though, it might be more useful to compare him not to the Old Masters, but to one of his near-contemporaries, and another popular Utah artist: Brian Kershisnik, whose canvases also possess a dreamlike atmosphere, if not of unreality, at least of removal to a place somehow remote from the one the viewer dwells in. Interestingly, neither dwells in timelessness, nor in the kind of headlong action that illustration often calls for. Instead, both lend their visions the same quality: a feeling of calm before the event: that something significant is about to happen, or that the meaning of what is shown is about to become clear. This feeling of immanent epiphany may be due to their shared faith that revelation is not only possible, but available, in art as in life. Christensen’s method is invention. He displaces the moment from real life, where it feels uncanny, to the realm of fable, where ogres and angels share witness with forest sprites. Kershisnik draws more on his own domestic life. Neither process is absolute: each artist employs imagination, each brings his family and life experience into his work. Nor is it necessary for the viewer to choose between the two approaches, though on some level, virtually everyone does. This will come even more into focus when we turn to Christensen’s daughters, Cassandra Barney and Emily McPhie, and consider how each, as sons and daughters must, has staked a claim on a portion of their father’s legacy.

Curiouser & Curiouser: The Artwork of James Christensen, Cassandra Barney, Emily McPhie, and Familyis at the Springville Museum of Art through April 6th. In our March edition of 15 Bytes we will continue the discussion of the exhibit by exploring the work of Cassandra Barney and Emily McPhie.