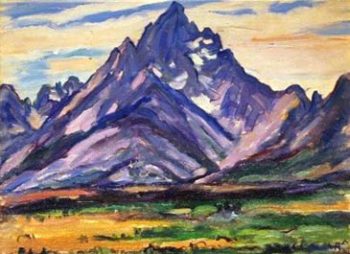 One of the monumental challenges in researching early Utah artists is that regardless of how talented the artist may have been or how many paintings he or she may have created during a lifetime, frequently there is precious little written about them. The researcher of primary material may occasionally get lucky — Henri Moser wrote beautiful letters [seventy-six] to his wife while he studied in Paris in the early 1900s and as I wrote my masters thesis they served as an intact chronicle of his training, life, poetry, concerns, frustrations, and plans. When I looked into the life of Louise Richards Farnsworth [1878-1969], a prolific painter who shared with Moser an interest in fauvist techniques, I was not so lucky. My bibles, the Utah art books by Olpin, et al., usually provide enough of a framework from which I can extend the research and in the process locate some spicy stories — many of which are true — and voila, a 15 Bytes column. With the number of Richardses in this town, I would have thought that any of them would know about Louise. Not true. The renowned genealogical library adjacent to Temple Square provided me with some contacts, none of which returned my emails. I was hoping to locate some grandkids, but after locating Farnsworth’s obituary, I learned she had no children. The two-column inch obituary essentially says, “Louise R. Farnsworth. Born, died, and studied art in between.” So it surprised me when after digging through some old records I discovered that she was surpisingly well connected for how little fame she achieved in state. 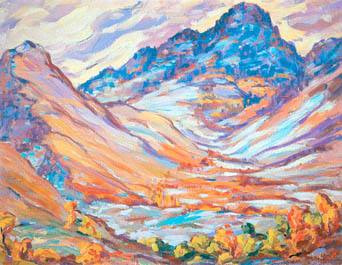 Louise Richards was born in 1877 to Joseph Smith and Louise Taylor Richards. Her father was the son — through the second wife — of Willard Richards, a physician and Mormon apostle famous for surviving the Carthage Jail assassination of Joseph Smith unscathed, despite being the largest target in the room. In 1873, Brigham Young (his father’s cousin) sent Joseph to study at Bellevue Hospital Medical College in New York. Apparently Brigham, who wasn’t getting any younger, wanted to keep his investment nearby, so upon his return he set Joseph up in a home nearby, at 35 West South Temple. The Richards lived across from the Temple on a block they shared with Joseph’s half-brother and fellow physician, Heber, two of Brigham’s wives, one of Brigham’s daughters and a son of John Taylor, Brigham’s successor.

So Louise grew up the eldest daughter of a large family with comfortable means, living in a prestigious neighborhood with two servants to take care of her — just the type of thing to make you want to get out of the house to study art. Louise’s first artistic inspiration likely came from her cousin, Harriet Richards, daughter of Heber, who lived next door. When Louise was still an adolescent, Harriet, eight years her senior, left for Paris to study art. There she met fellow artist James T. Harwood whom she wed in 1891 (unfortunately, Harriet eventually gave up her career to raise a family and support her husband’s career). 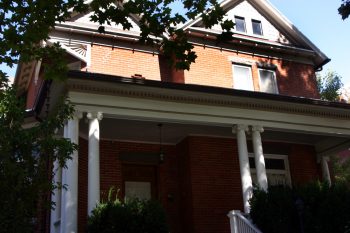 Farnsworth received her first formal art training from the Art Students League in New York, where, from 1898 to 1900, she studied with Kenyon Cox, a realistic symbolist, and Joseph De Camp, who helped form the Impressionist group of painters, The Ten, in 1897. While she was away in New York, Farnsworth’s family moved to a new home, a Queen Anne style two and a half story house built in 1891, located at 969 East Temple.

In September of 1902, Farnsworth, and her younger sister, Lillie, applied for 2 year passports in order to travel abroad. For over a decade artists from Utah had been travelling to Paris for study. Farnsworth’s second cousin, Lee Greene Richards, had left the year before and perhaps Farnsworth was emboldened (and possibly her family persuaded her) by the fact that in the spring of that year Mary Teasdel became the first Utah woman to be accepted at the Paris Salon. Farnsworth would follow in her footsteps and also have a piece accepted. Though by now the Salon was no longer the state-sponsored exhibit it had been in the 19th century, it was still controlled by conservative elements in French arts. I have never seen an early Farnsworth painting composed in a purely academic style, but they must have existed if she was accepted in the Salon. Impressionism, Fauvism, Cubism, and related modernist styles were not taught in the Parisian academies and therefore any modernism was learned by association with other “maniacs” of the time. Fauvism would not explode onto the scene until after Farnsworth returned from her trip abroad, but already in 1903 many of the Fauves were exhibiting in the first Salon d’Automne and she might have seen some of their early works.

In her passport application Farnsworth was described as five foot four, with blue eyes and brown hair, and a fair complexion. Lee Greene Richards used Farnsworth as a model, and based on the only picture of Farnsworth that seems to exist, she was a knock out. Her very Victorian pose and dress seem totally out of place with the vivid masses of impasto paint she would use to depict some of the region’s recognizable landmarks, like the Tetons.

When Farnsworth returned from her studies in Paris in 1904, she immediately married Philo T. Farnsworth, who was her age and had also grown up on South Temple, though closer to town. In 1910 the couple lived on 6th Avenue, just up the hill from where her parents had relocated in 1905 (317 1st Ave). They eventually moved to a home at 165 A Street, where they lived next door to yet another of Louise’s cousins. Larry Livingston purchased the two homes in 1976 and said that people who knew Louise frequently stopped by and told him stories about the Farnsworth household. On one occasion, a Richards cousin who was staying over observed, from the upstairs stairway, a festive party in the palatial rooms below. She told Livingstone about Carrie Katz, a Utah lieutenant in the Suffragette movement and confidante of Susan B. Anthony, who hosted a large party in the Richards home for her colleagues in the movement. During the evening, Katz suddenly danced around the living room wearing only a large ribbon, and later dropped the ribbon to the floor. A maid picked up the “dress” and hung it up. Alcohol was probably involved.

Farnsworth’s husband, who was a lawyer, should not be confused with his more famous cousin, Philo T. Farnsworth, who invented television. Livingstone thought this the case, and said he had heard that Louise’s husband also had a wife in Idaho, who gave birth to the famous inventor. Livingston went so far as to speak to the inventor’s widow, Pem Farnsworth, about the family relations. She said “there were a lot of secrets in those days,” and left it at that. Turns out, the polygamy goes back a couple of generations to the two Farnsworth’s grandfather and namesake, the type of Mormon patriarch sent out by Brigham Young with a number of wives and told to settle an area (in this case, Beaver, Utah). These prolific paterfamilias’ spawned numerous progeny, many of whom wanted to name their own children after the ancestor, resulting in plenty of confusion for genealogists and the Mormon predilection for the use of middle initials. 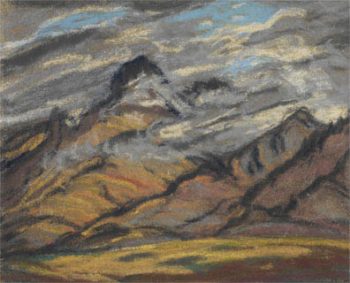 Livingston also heard a story about Farnsoworth’s mother, Louise. She had the first electric car in Salt Lake, and used to drive it down the Avenues to ZCMI, and park it out front. She would enter the store, select dozens of clothes and accessories, and have the clerks load them up in her car. Returning home, she would try everything on and later ask the clerks to pick up the ones that she didn’t want.

The mother’s exuberant behavior is reflected in her daughter’s art. Farnsworth is best known for her modernist — bordering on abstracted — landscapes using the Fauvist palette. Like Moser, and Lee Greene Richards, who returned to Paris after the explosion of Fauvist color, she emphasized secondary colors on her canvases. Her purples and greens with occasional oranges, along with short painterly brushstrokes, are signatures of the Matisse Fauvist style. 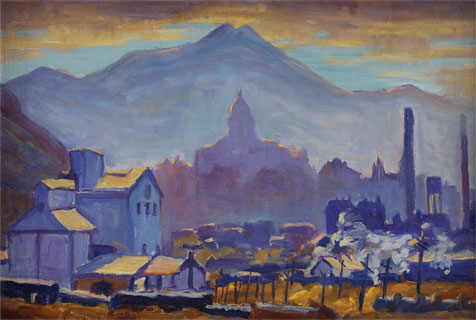 Farnsworth’s 1935 painting, “Capitol from North Salt Lake,” owned by the Springville Museum of Art and published in Utah Art, is one that most people will recognize. I generally leave interpretation of art to the viewer [contrary to what the Museum of Church History and Art would have preferred me to do as a docent], but Farnsworth’s “Capitol” emphasizes the industrial section north of Salt Lake with some detail. The capitol and other buildings down the slope are gently silhouetted in red-lavender. The subject and juxtaposition of the government and industry may have been a theme that was suggested by the depression-era WPA program.

The various Utah art books report that much of her career was spent in New York, as well as California, though I haven’t been able to find any evidence of the couple residing on either coast. In 1947, when they were returning home from a trip abroad, Philo and Louise listed their home as 105 East South Temple, Apartment 428. Philo died in Utah on October 4, 1952 and Louise was living here when she passed away in 1969. 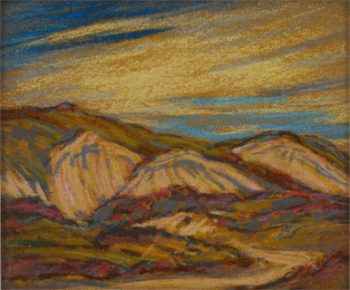 Farnsworth seems to have been most prolific in the 1930s and it is possible that this is when she lived on either coast. In 1934, she had an exhibition of 52 oils of mountain scenes from Utah to Alaska at the prestigious Montross Gallery of New York, followed by a solo show at the Stendahl Gallery in LA in 1936 and another at the Montross in 1938. A New York Times critic (as reported in Utah Art) said of her work, “Here is no facile naturalism, sugared with the specious of the studio.”

It seems odd that Farnsworth was neglected in her home state since she did not lack for connections. Through her father she was a blue blood. With her husband a lawyer and her brother, Ralph T. Richards, a prominent doctor, she must have run in the right circles. Her sister-in-law, Julia A.F. Lund, was well-connected in ecclesiastical circles; and her niece-in-law, Judy Farnsworth Lund (who later married Ted Wassmer) supervised statewide art programs in the 30s, including W.P.A. projects. Why, then, was she so neglected in her home state? There must be a story there, one I hope a future sleuth and scholar will take up. 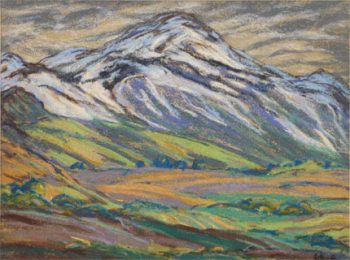 Farnsworth is to be admired for keeping to her modernist approach to art and even though she did not make a living at her craft in Utah, her legacy of marvelous, bold works adorn the walls of museums, banks, the Alder home, and various other private collections. Richard Oman of the Museum of Church History and Art said of Farnsworth, “…she avoids a point of view which subscribes to the conventional picturesqueness of grand vistas and concentrates instead upon the simplicity of the mountain masses which prove sufficiently interesting in themselves…Her work has a freedom of brush that takes on a life apart from the scene being depicted. The texture of paint and brilliance of color take on a unique life of their own.”

If you have paintings by Louise Richards Farnsworth or information regarding the artist that you would like to share for research purposes please email us at editor@artistsofutah.org. 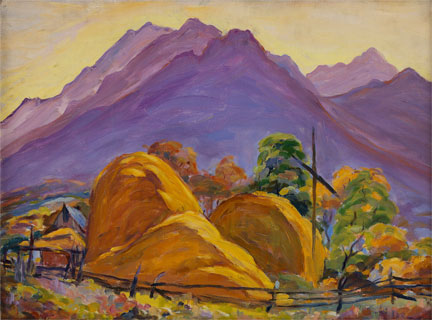 Haystacks, oil on board, by Louise Richards Farnsworth, courtesy Springville Museum of Art