“It is if you like it” Tracy Featherstone: Domestimutation & Roscoe Wilson: Waste Not, Want Not at the CUAC 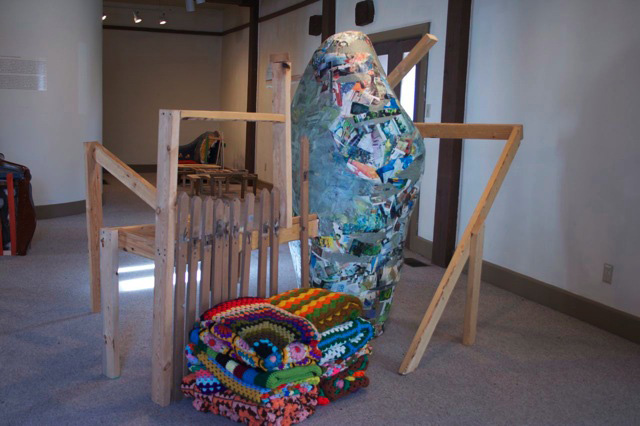 Installation by Tracy Featherstone at CUAC

Back in the twentieth century, the meticulous, pedestrian questions of art criticism were swept aside by a racy substitute that captured the public’s fancy in a way academic discourse never could. In a foretaste of what was about to happen to art itself, the response “But is it art?” came to be almost as well-known as “Sock it to me” or “Where’s the beef?” Now each new season brings not just subtle variations on last year’s art, but new flavors: characteristics that had not previously been thought appropriate to art, but which once noted become necessary reference points. Escalating provocations require an ever-more jaded insider audience. Concept –a quality inherent in the work — replaces content, which would link it to the external world. Beauty is like the drunk uncle at a wedding: its presence a cause for caution, its absence an unspoken relief. A nearly interchangeable pair, performance and installation, have become a shell game to hide the missing pea of quality. The entertaining and the ephemeral have trumped the grave and universal. Perhaps the saddest development is that the rapid, welcome proliferation of new materials and techniques has been used to justify the disappearance of craftsmanship. After all, how can an entertaining artifact in a shiny new material absorb the same skill as those elevated by longstanding tradition, like marble or oil on canvas? One gallery that enjoys exploring the dilemma of present-day art is the Central Utah Art Center in Ephraim. Interested readers may want to check out their website and view the slideshows on the current shows before reading further.

If you fed your childhood games of danger, adventure, and shelter through a shredder, then taped those long strips together in random order, some bottom to top and some inverted to show a blank side, the rudely assembled resulting page might suggest the current installation at the CUAC by Tracy Featherstone.  A closer match would come from using only those strips that refer to occasions when your home became your imagination’s laboratory: not formal events designed by grownups, but the games you and your siblings invented on rainy days when you couldn’t play outside, or when you stayed home sick from school, or nights you slept on the floor, your improvised sleeping quarters lit by the eerie light of the TV. If, like me, you lived among houses under construction, or your home was extensively remodeled while you were living in it, and either way the framed wooden skeleton and metallic or plastic internal organs of domestic construction were your playground, you won’t need labels to identify Featherstone’s cannibalized furnishings with fantasy constructions grafted onto them. 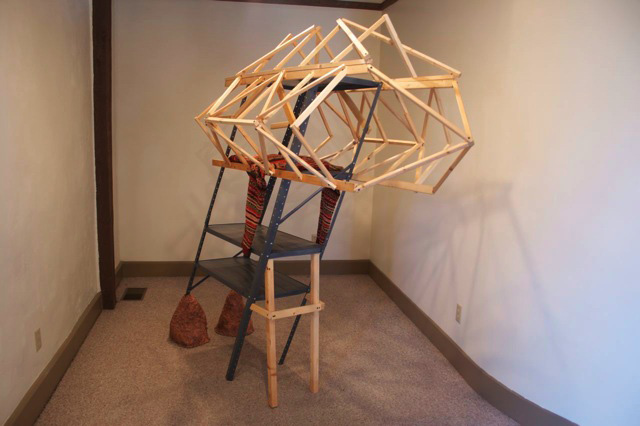 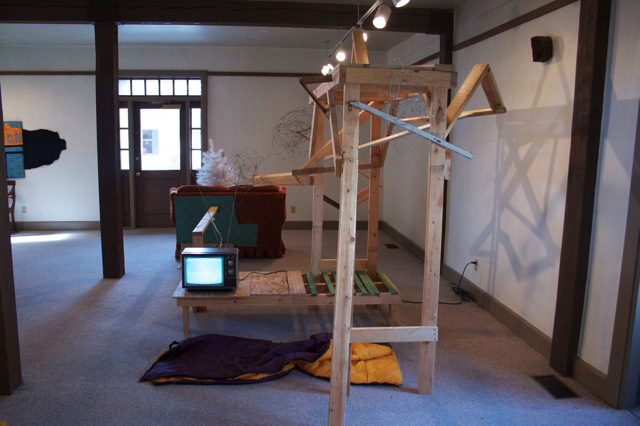 Featherstone’s idea of installation is less monumental and more episodic than installations were during the heady decades following the art form’s invention, usually credited to Marcel Duchamp. Rather than fabricate a unique reaction to each environment she’s invited into, Featherstone carries a number of set-pieces with her from venue to venue, assembling, arranging, and slowly evolving them in response to conditions she encounters and her own deepening understanding of what she’s doing. For her, “installation” mostly means the opportunity to remodel and fine-tune a work—not quite an assemblage—each time she shows it, making the process less like a visual artist’s and more like that of a poet, who can present a new draft at each reading.

Upstairs, Roscoe Wilson’s installation envisions the alter-ego of modern society’s one-use-only, throw-away economy. His is the one where bright colors and catchy design are used to make the environment attractive to live in, instead of creating dissatisfaction in the name of cash flow; and instead of everything being wasted, nothing is. In a flash, an instant of voluptuous visual surprise, visitors to this fantasy landscape will see, and better yet feel, how a strong design sense can transform modern detritus into intellectually intriguing and sensually pleasant surroundings. It’s not just that our garbage accumulates until it blinds and poisons us; we waste our potential to do great things with the same resource, including ourselves. After seeing the dream landscape Wilson and his crew of volunteers have created, we may well wonder if our dumps and transfer stations don’t contain more aesthetic treasure than the mercantile palaces and pasteboard castles that overwhelm our senses while feeding nothing to our hearts and minds. 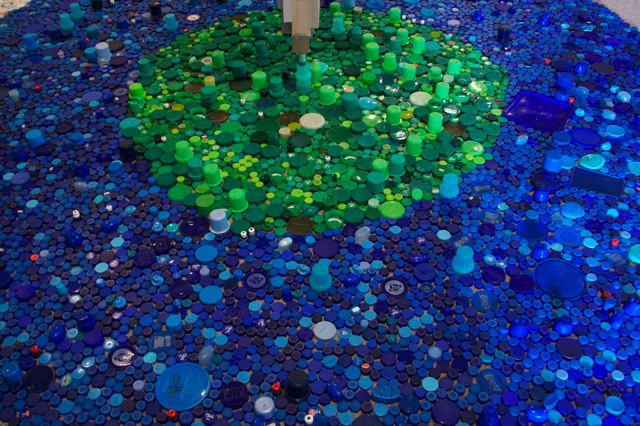 Detail of Waste Not, Want Not, installation by Roscoe Wilson

Like Featherstone, Wilson trucks the modules of his art from place to place, but his lids and tubes arrive loose in boxes — sorted only by color — and the pristine arrangements that he lays out take shape in the intersection between simple geometry –round lids suggesting circles, cubical boxes building crystals –and the component parts’ family resemblance to larger modules, like outlying dwellings and downtown towers in a futuristic city (one that has solved the problem of waste?) or tones in a musical composition. In a new development, Wilson has turned his clustered boxes, resembling Cubist portraits and Sci-fi space stations, upside down and hung them over the bas-relief sculpted and patterned floor, so that these crystalline stalactites hover like mother ships, building down to touch the floor like raindrops falling on a pool, the energy spreading from the contact reflected in a plangent change of radiant color. For all its sensual excitement, though, it’s closer to the visionary social text-end of art than to an experience reflected in tranquility.

Nothing about present day art has erased the venerable facts of human nature and enterprise. As a species we do our best work against the grain. Competition between us, each trying to better the others’ performance, forces us to collaborate on the larger project of quality: to achieve our best collectively. It’s when taking on the past masters directly—on what we like to call “their own turf”—that our best emerges. Featherstone’s tableaus owe their easy acceptance to installations that went before and that achieved the same aesthetic unity that a sculpture needs to possess: either through narrative, or poetic compression, or visual rhetoric, or a combination of such elements, they generated an experience in their audience that was identifiably present in the life of the artist who created them, and clearly consonant with his or her intention. Despite their being unfamiliar and possibly ugly, they achieved the same response among viewers that they are used to having to beautiful things. Featherstone’s installation is rich in her biography, but what comes across lacks the specificity necessary for us to feel what it means to her. On the reverse of the coin, Wilson’s work is certainly beautiful, and possessed of a power and impact no photograph can ever do justice to. But it’s a fantasy, perhaps even a diversion, that lacks a means to capture and channel the emotions it releases in us. We feel great looking at it, but we don’t know what to do with the feeling. 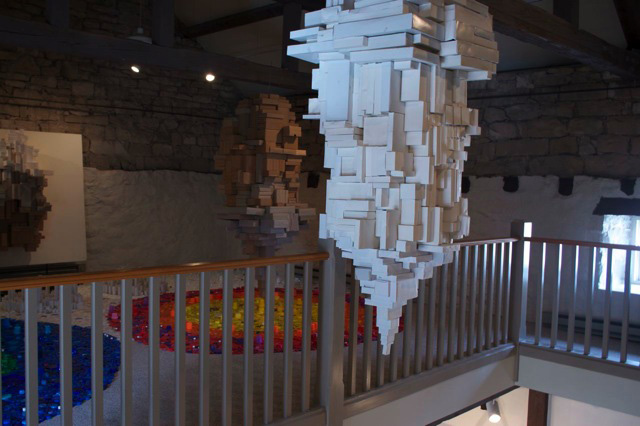 Detail of Waste Not, Want Not, installation by Roscoe Wilson

Meanwhile, it’s an illusion that somehow the artist who invents a genre all his or her own, where no known standards apply, will make a larger contribution than one who humbly and vaingloriously strives to do better against the challenges of the genres and standards, the canon and the pantheon we have. Instead of asking why we don’t have the geniuses the Renaissance or the early twentieth century had on tap, we might ask how those eras nurtured the talent they had into greatness. On the basis of the evidence on hand, Tracy Featherstone and Roscoe Wilson may well be capable of greatness: all they may need is to have nothing less demanded of them.

Tracy Featherstone’s Domestimutation & Roscoe Wilson’s Waste Not, Want Not continue at the Central Utah Art Center December 26. Visit the CUAC website for a full slide show of both exhibitions.