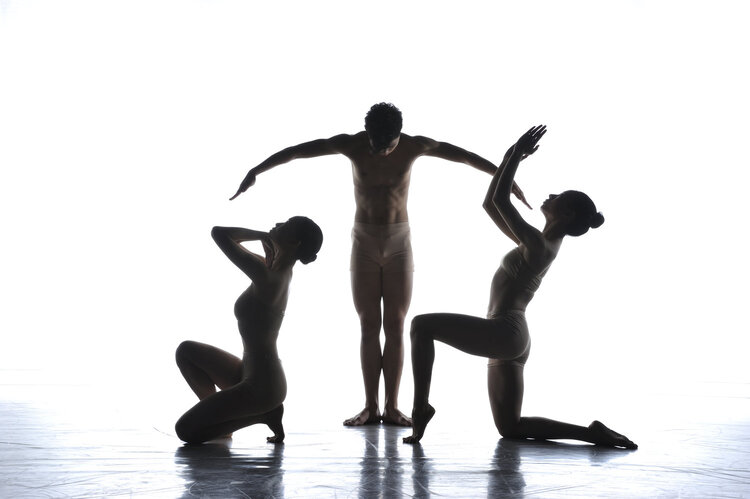 Whether or not you attended Guangdong Modern Dance Company’s Beyond Calligraphy at Kingsbury Hall on Tuesday, I have some questions for you regarding this idea of modern dance. It is inevitable that upon entering a Lyft to be chauffeured to my classes at the U’s Marriott Center for Dance (an embarrassingly frequent amount of times because of my complicated relationship with time … more on that later), the driver will ask what kind of dance I do. When I respond with “modern dance,” I’m often bombarded with a litany of questions that I can never find quite the right answers to (fellow non-driving mods, I know you can relate). The most common being, “What does that look like?” The most concise answer I can give, after I’ve kicked myself for not just answering “ballet” to their initial query, is “a lot of things, it depends on the choreographer.”

To Guangdong’s choreographer Liu Qi, modern dance looks angular, precise, and deliberate. It flows from one shape into another at a pace that’s slow enough that we see almost every detail of the transition, but also quick enough that the entire body of the dancer remains in constant motion. Incredibly strong with extreme attention to detail, the choreography increases in speed and dynamism from one piece to the next. This was true for the first act of Beyond Calligraphy, at least, which included five dances that were “developed from the stylistic essence of different Chinese scripts” according to the program. I attended the pre-show calligraphy lecture and demonstration with calligraphy master Xie Feidong, hoping to glean insight into the creative process for this performance. Calligraphy’s influence on the movement was evident after Feidong’s presentation, which detailed the development of several characters over centuries, and I even left with a calligraphic creation of my own – the word “happiness” on red paper embellished with golden threads. Oh how I love a keepsake!

The second act was quite a contrast to the first, consisting of only one piece that moved entirely in slow motion. It spoke to my sloth sensibilities, the ones that cause me to miss the bus and rely on Lyft, as mentioned earlier. As a self-identifying human sloth, I can tell you that there is a lot of pressure to speed up, get on with it, move at a more “productive” pace. Ten minutes into this piece, I sensed some of the audience wishing the same from the dancers. Truth be told, I cannot relay any of the choreography of this act to you. The dancers moved so slowly that I stopped looking at them. It felt okay to do this, like I had received permission to ignore the details of the movement and focus instead on the trance-like ambiance that was created by the combination of slow-moving bodies, instrumental music, and video projections of serene nature scenes. I allowed myself to get lost in time and only occasionally snapped back to ponder if the constantly evolving video projections, which reminded me too much of a computer’s default nature screensaver, were significant landscapes of China or random stock images.

Several of my friends in attendance expressed that they were expecting the performance to be better; one said that movement seemed more balletic than modern. I felt conflicted in this conversation. Judging the performance as better or worse, good or bad didn’t seem relevant. It felt more important to acknowledge that we had just seen Chinese Modern Dance, which will inevitably differ from American Modern Dance. I’m currently gathering, through dialogue about dance pedagogy across the country, that Chinese perspectives and histories (and really, many other perspectives and histories that aren’t Eurocentric) are rarely shared in dance programs. Guangdong was established in 1991, approximately 90 years after the American claim on modern dance. How do we observe and study what “modern” means across the globe, acknowledging that cultures shift on different timelines because of different societal needs and demands, without imposing our Western/Eurocentric sensibilities? As eclectic as modern dance is, and as hard as we claim it is to concisely define, why are we so quick to discredit other cultural approaches to modern dance as, indeed, modern? Kudos to Brooke Horejsi and Utah Presents for sharing this company with us, and may we continue to expose our Salt Lake dance community to culturally diverse presentations and interpretations of modern dance.