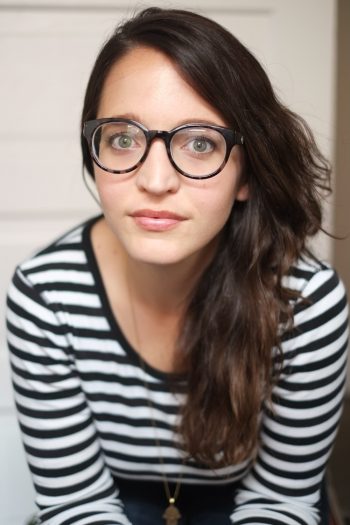 READ LOCAL First: This is Utah’s most comprehensive collection of poets and authors. For the month of December, 2020, we present creative nonfiction by Utah Original Writing Competition winner Iris Moulton.

Moulton lives in Salt Lake City. Among other publications, her work has appeared in Gigantic, American Short Fiction, Western Humanities Review, and The Center For Fiction’s Literarian.

All the mothers wore one color cardigan with the same color shirt under it. Sweater set said my mother the same way I said asparagus.

What I said was, “Why don’t you look like the other mothers,” but what I really meant was maybe you’re not a real mother.

After I had finished crying we laid out what I might want to wear to the party.

“Do you know what the other kids are wearing?”

I lied and said no. I wished I was but I was not brave enough to wear that itchy sweater vest for long.

Let’s Leave One Person Out

Just like she reminded me to right before I slammed the car door I remembered to say Thank you Syla for inviting me and Thank you Mrs. Young for inviting me but I did not say You have a lovely home. My mother said that at a funeral one time and it sounded like a funeral, like something you say instead of.

Syla and I were face to face but she was smaller. Her lips were dry. She had little white tags all over her lips. Like I could take one between my fingers and peel her mouth off into a new mouth.

Then they said “Let’s make a circle of enough chairs only let’s leave one person out.” At the scratch of the needle I threw Erica hard with my hips and sat down and everyone clapped except Erica.

Then they said, “Let’s pin the tail on the donkey!” The donkey had a tipped red heart for a mouth, wanting a kiss not a tail. Soon I was blindfolded but it didn’t really feel all that different. I thought to myself Okay concentrate. You can walk forward and pin it the exact same as everyone else can.

Suddenly everyone else was saying Oh oh oh and laughing. I peeled off the blindfold and one of the ladies was rubbing hard at a tiny hole I made in the door saying, “That is just fine, dear, these things happen.”

One by one the grown-up ladies asked me Now what is your name, but they didn’t ask anyone else. One of them asked me which steak I was in and I didn’t say anything but I thought of cloth napkins and knives, and then the lady said, No, stake. I mean, church.

The cake was on a big plate, not in a box. We ate it in a room filled with balloons that nudged up against each other with the crossing or kicking of our legs, like they were telling secret jokes.

Even though we were still eating cake the ladies said, “Alright let’s play a fun game.”

Syla came to the front and smiled with a lady’s two hands on her shoulders and another whispering in her ear. Then Syla pulled up her foot and stomped out a yellow balloon. We held our ears and screamed.  Syla reached down and picked up a piece of paper.

“It says Do a funny dance,” she said.

And then she poked out her tongue and let her elbows flap and everybody clapped.

And Erica went up and chose a green balloon, and everyone was covering their ears even before she smashed it and we all screamed and I looked at the grown up ladies to hint maybe this wasn’t such a good idea but they were screaming too and smiling.

“It says Who is your best friend.” Erica looked around the room and then she said, “My mom.” And everyone clapped especially the ladies.

“You,” said a grown-up lady even though she had already asked my name and I could tell she had even nudged another grown up lady when she thought I wasn’t looking to ask her what my name was.

At the front everyone was staring at me and I was thinking Okay just choose a balloon the same as everyone did, don’t even think about it, so that when I wanted to choose the red balloon I chose the yellow one just left of it at the last second like I didn’t want anything at all. And I brought my foot down but it rolled a little and made a sad noise and nothing happened so I did it again faster and it popped.

I picked up the little piece of paper and could see now that it was decorated with tiny pink paper flowers and smiley faces and hearts.

“It says Sing your favorite song from primary,” I said.

Everyone nodded. “That’s a good one,” someone said.

I waited as long as I could before I had to say: “I don’t know what that is.”

“It’s when you go to church and you’re in the kid room,” said Syla.

Everyone nodded except for the ladies whose mouths were quick melting Os.

The lady who didn’t know my name walked on her knees to my side even though I was still taller than her by the time she got to me so it would have made as much sense to walk normal.

“Let’s help her. We can all help!” she said. And she moved her hands like everyone was about to pick up saxophones from under their chairs and start blowing.

“I am a child of God,” the woman sang, swirling the girls’ voices to us with her hands.

“And he has sent me here,” the woman swirled her hands at my face.

“Has given me an earthly home—”

“Join in honey,” she whispered into my ear.

“With parents kind and dear.”

The woman shook her hands at the room.

“I am a child of God,” I said because I’d already forgotten the music part.

“Good enough,” and she walked back on her knees to the other grown up ladies.

“Well, everyone,” said one of the ladies. “What does that song mean?”

She turned to me. “What do you think that song means?”

I thought to myself Okay just think really hard about it. Don’t think about turning off the lights when you leave a room.

“They didn’t live together, though. And. Um.”

Back at home my mother was standing on her head.

“How did it go?” she asked, her smiling mouth the deepest frown I’d ever seen. “Did you remember to say you have a lovely home?”

She slowly lowered her knees and stayed bowed to the Abundance corner of our house.

“Do you want to come do shavasana with me?”

And we laid on our backs and pushed all the air out of our mouths and pulled our livers into our spines thinking of nothing at all and at the very last second she picked up my hand and squeezed it and that meant it was all over and it was time to get up.