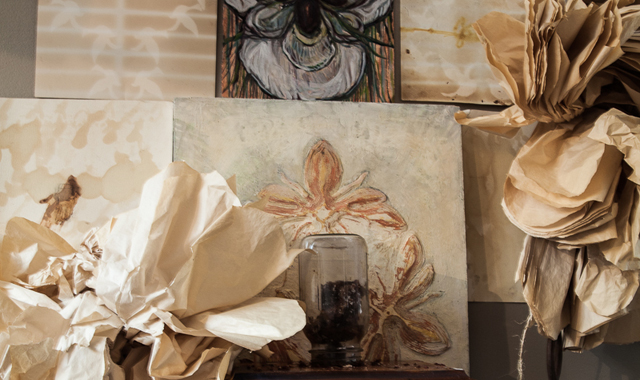 By 1938, the Surrealists had concluded that not only the individual objects in the gallery, but the exhibition itself should be a work of art, and they asked ‘retired’ artist Marcel Duchamp to design that year’s International Surrealist Exhibition at the Gallerie des Beaux-arts. For perhaps the first time, instead of arranging submitted or juried works, the designer—whom today we would call a curator—would select and even provide art to place according to his personal scheme. A notorious provocateur, Duchamp chose to hang coal sacks from the ceiling in the main room, turn off the lights, and hand flashlights to viewers at the door to the darkened, cave-like space, arguably making literal the notion of art as adventure and exploration into experience and even consciousness itself. Over the following decades, this expanding concept of the exhibition gave rise to an invigorated art form: a separate, if somewhat ambiguous category of artwork called Installation.

Ideas can be new, but the facts that give rise to them usually are not. The prescribed attributes of installation were all present from the start, in the images of aurochs and bison painted in caves 35,000 years ago. They were created by artists working in situ, in response to unique, immediate conditions, and if they were to be removed from their context, they would only be diminished, losing much of their mystery and power. In fact, prior to the Renaissance, most art—think Egypt, India, Cambodia, Greece, Rome, the Middle Ages—came into being in relation to buildings or other fixed, environmental supports. According to Art Danto, the most important artistic conflict of the Renaissance was not about perspective or anatomy, but whether painting and sculpture should be installed on static altars, as they were in Siena, or become portable objects, autonomous in their own right, in the new, Florentine manner. The then-revolutionary presentation won out, and centuries would pass before the pendulum swung back. Among the early winners, Leonardo carried “Mona Lisa” with him from place to place for the rest of his life.

Seen today, alone on a gigantic palace wall, only “Mona Lisa’s” glass coffin and public relations aura prevent its physical presence being overwhelmed by excessive space. One of the most clear-cut predicaments produced by our image-soaked era is that nothing can stand up to the expectations brought on by previous or excessive exposure. We’ve already seen too much of “Mona Lisa” to be impressed by her, and the crowds she now draws resemble nothing so much as those along the red carpet at a movie premiere. Even scale falls before modern technology: Stonehenge, the most visited attraction in all Great Britain, shares the same fate as “Mona Lisa”: the comment made most often by visitors to both is the same: “I thought it would be bigger.”

Everyone remembers that Marcel Duchamp was sufficiently dis-enthralled by Leonardo’s portrait to draw a mustache on her postcard reproduction. It’s even possible that the triumph and inevitable waning of such portable works helped give him the idea for installation, the attributes of which include scale: installation takes over space, sometimes to extremes. Utah’s current leading installation artist, Stephanie Leitch, showed how it’s done in two recent works. “Untitled Apogee,” her meditation on the role assumed by church architecture in the dramatic landscape of the Wasatch Front, filled its alcove (at UMOCA) as fully as Magritte’s green apple does “The Listening Room” and his red rose the “The Wrestler’s Tomb.” The result was a rare work of landscape art that feels in the body as much as it looks in the eye and mind.Whether she agrees or not, the artist is at least contemplating, along with Magritte and Wordsworth, whether ‘the world is too much with us.’ Leitch then took a quantum leap into the architecture with “The Mote and the Beam” (at the City Library), where she literally (to use the adverb correctly for once) stitched the room’s walls together with a dense web of yarn suggestive of things tangible and intangible— mathematical plots, atomic bonds, the adhesive threads that form when sticky things or ideas are pulled apart. Central to the enigma of the senses is the paradoxical quality of space, which evaporates when empty and disappears when full. Stephanie Leitch gives form to the invisible mathematics that make it real in the mind.

Until now, Utah’s best-known installations have typically been permanently sited. Ralph Helmick and Stu Schedhter’s “Psyche,” the composite head made of 1,500 books and butterflies in the atrium of the City Library, profits from its location adjacent to the open stairs, which allow studying its changing perspective while ascending and descending. Viewers can climb close enough to study the delicate butterflies hovering near, or perched on, the books they seem to be reading, or stroll to the far end of the atrium and study the entire head amidst the elaborately articulated space. Downstairs, meanwhile, two utterly evocative installations fly under the radar, passing themselves off as reading rooms for the children’s library. Karl Schlamminger’s “Crystal Cave,” inspired by Superman’s Fortress of Solitude, was crafted of white plastic that simulates ice, while “Attic” invites readers to tuck themselves beneath wooden trusses, amidst simulated lath and plaster, in an isolated aerie actually not only underground, but beneath a lake. Unlike the sculptures mounted on poles in various locations around town, they modify space the viewer shares.

A few blocks away, in a much simpler, far more formal setting, Dale Chihuly’s standing chandelier in the lobby of Abravanel Hall remains from the art that accompanied the Olympics. Chihuly’s lifetime achievement has been to blow open the limits of fragile blown glass in favor of bold, architecturally-scaled ensembles. Some, like the floats inspired by the glass balls that used to detach from fishing nets and drift ashore on the West Coast, can be freely juxtaposed. Others, like the tower at Abravanal, so suggestive of growth and striving, are made of numerous components designed to hang together on structural wire forms. Trained in textile arts, Chihuly makes consummate use of color and form, but in contrast to most contemporary artists, gives his ornaments only abstract content and no guidance to invite or reward contemplation. An element of class intrudes in this case, as well. Access to Abravanal Hall is restricted by its location in a theater lobby, which—unlike museums that have free days or libraries that are open to the public—is usually either closed off or crowded with those attending the events it serves. Most viewers will probably be limited to the view through the window. Unlike these permanent works, but like Stephanie Leitch’s brief encounters, Japanese artist Motoi Yamamoto’s installations made of salt gain power from his determination that, while his work will consume his lifetime, each separate iteration will last for mere weeks. Any true artist’s work will evolve over time, but where most leave behind a trail of durable images, texts, or scores, artists like Leitch and Yamamoto primarily leave artifacts: historical clues that recall or suggest but cannot fully recapture the substantial moments of their careers. Having spent the last fourteen years touring the world, painstakingly articulating spaces—primarily from the ground up—with intricate and elaborate drawings and sculptures in salt, Yamamoto doubles down on the conceptual nature of works that now exist only in memory and the imagination by collectively titling them with a single name: Return to the Sea. Among the more revelatory qualities of his two recent works in Utah, a state inextricably connected with salt, saltwater, and the (inland) sea, was the way the first, done at Weber State in late February, was created, exhibited, and destroyed in the Art Department building, while the other, at Westminster College in March, followed the same sequence in the Meldrum Science Center. The oft-noted connection between art and science—at least as valid and compelling as that between art and religion—challenges an artist to bring scientific activities and perspectives to the foreground in the viewer’s mind. Yet installation, with its deep connection to context and setting, brings the resonance forward in a way no object or activity alone can accomplish. The unmistakable contrast between the textures and evoked content of the two works—one so like a geometric maze, the other suggesting an ukiyo-e, woodblock-print depiction of a whirlpool—showed one way setting and work can unite in an aesthetic whole. Furthermore, by allowing visitors to watch his labor, Yamamoto brings not only the art object, but the process itself into the site.

Like Yamamoto’s, Annie Kennedy’s decade’s-worth of installations have been unified by her continuing focus. Both emphasize materials: where he draws with salt to commemorate his sister, she assembles personally resonant objects and substances to recall, and reflect on, her family in the context of cultural history. Although she has never broken entirely with the convention of hanging individual works—her survival quilts being perhaps the best known—such recurring motifs as mantlepiece clocks, sego lilies, and sardine tins sealed in wax argue for a self-contained system of iconography that lend her collections the continuity of a traveling event, installed in a particular place and time, never to be precisely repeated.

With the exception of abstraction, most of the last century’s rapidly changing, avant-garde approaches to art making bypassed Utah. In fact, minimalism, installation, performance, appropriation, and intervention (not to mention more recent trends involving food, sex, and other transgressive materials) had only isolated or diffuse impacts anywhere between the two coasts. Media that are only now claiming attention in the local scene have seen their vogues come and go in today’s international market. Arts grounded in craft, like studio glass and sculptural ceramics, have also been added to the mix. Yet with its strong sense of community and shared culture, Utah may provide a far richer medium to promote the deep rooting and rich growth of subordinate, yet demonstrably vital and energetic approaches to this fundamental human activity. To take just one other example, the impulse behind Earth Art, an almost entirely New York gallery driven activity that saw works like Spiral Jetty and Sun Tunnels dropped into Utah like alien landings, has been absorbed into the almost religious feeling for landscape that has long distinguished local art and set it apart from the mainstream. Throughout human history, would-be invaders have been absorbed by, and have disappeared among, those they sought to displace. Why shouldn’t the best ideas of modern and contemporary art invigorate Utah’s characteristically vigorous, usefully traditional voice? 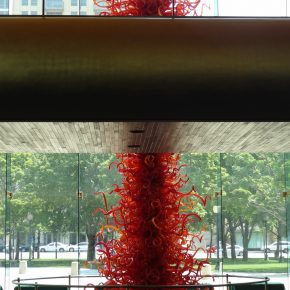 For additional articles on the artists discussed in this essay see:

Annie Kennedy in “Snapshots and the Fabric of Life
Plural & Partial: Tracing the Intergenerational Self at the Rio Gallery”

Motoi Yamamoto in “An Ocean of Salt”