The Art Access galleries this month present two exhibitions that reveal the unique and dual nature of this non-profit organization. Art Access is about providing underserved communities and individuals with disabilities access to the arts. In other words, giving those found on the outside access to the inside. But in many of its sterling exhibitions, it also gives the viewers access to the inside lives of its outside artists and participants, oftentimes showing us there is little difference between the two worlds.

The work of autistic artist, Peter Scott Stone, now on display at Art Access, is a playful world of imagined monsters and intimate private lives. It is an entrance to the world of an individual who lives more in his mind than in the physical world. The photographic work of Lynn Hoffman-Brouse, also on display through February 11th, depicts the lives of a family living in a physically outside world.

“Worlds Apart,” an exhibition of twenty-five pen and ink drawings by Stone, shows the imaginary worlds of this thirty-year old who was diagnosed with autism at age four. Stone has been working under the tutelage of mentor Sam Wilson. 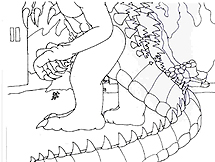 Archango, the Godzilla-like creature that sprang from Stone’s imagination on to the drawings in this exhibit, leads a double life. He spends his time at his home in Montana with his devoted mate and five-year old son except when they are on international excursions, destroying or saving world-class cities like Tokyo or New York.

Stone’s second imaginary world depicts the lives of jet-setting Kate and Ben, a young couple who spend their time on an endless honeymoon making love and drinking pina coladas.

His drawings are straightforward, strong, contour lines that make me think of Matisse. On Stone’s process, Wilson says, “The lines would flow, an immediate response to what Pete knew and what Pete saw in his mind’s eye. Peter doesn’t use actual clues or observed information. Inside Pete is a reserve of magical thoughts, imaginative characters and aremarkable visual vocabulary.”

The themes expressed in Stone’s work are as directly connected to his interior life as are the visual imagery he employs. Stone yearns for a mate and wishes to have the power of his Archango. 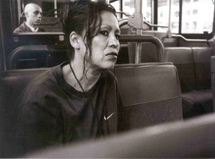 The thirty black & white photographs by Hoffman-Brouse examine the life of Cheryl Candelaria and her three boys, as they live at the YWCA’s Transitional Housing Apartments over a five month period.

Candelaria’s past includes bouts with drug addiction, domestic abuse and jail. She has been clean for two years now, and the photographs document her long journey towards healing.

Stone’s visual world is that of one who has been outside emotionally, yearning for emotional and physical contact. The world depicted by Hoffman-Brouse, on the other hand, is that of someone reeling from the harsh realities of domestic abuse and the physical world. Yet both exhibitions contain hope and the desire to move beyond one world to another.

Both exhibits included writing — poetry in the case of Stone, and a written narrative of Candelaria’s life — but the most moving and most accessible parts of the exhibits are by far the images. These exhibits show us the true power of art, which is a bridge between the private world of the creator and the viewer. Art shows us that we are all outside and that we can all be inside. Both exhibits will be on display through February 11.