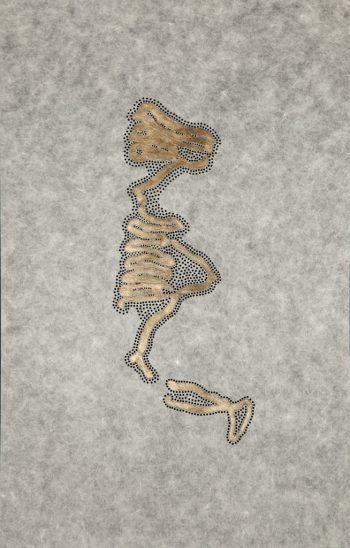 “Part of what artists do is call attention to things that have been overlooked, and do so in a way that causes people to start noticing on their own,” Jim Frazer said in early 2018 while working on a project in which he transformed the trails of bark-beetle larvae into works on paper and large sculptural objects (see here). He was well into the project before he discovered what he was looking at wasn’t actually the work of the bark beetle.

You may have noticed the same thing Frazer did — curious channels carved into the sides of dead wood in the forest. “Rabbit runes,” is what artist and filmmaker Jan Andrews says she called them when young, imagining a cottontail or hare furiously nibbling secret messages on the wood. Frazer knew they were the work of beetles and that bark beetles were devastating forests all across the West. He decided to trace the patterns, first manually, then digitally, focusing on the linear quality left by the hungry beetles. He printed the resulting outlines on thin tissue, and, with a paper drill, added small dots around the outlines, evoking the small bites by beetle larvae that made the original patterns. The addition of metallic mica powder added another touch of refinement so that the works took on the look of a sacred object, like a page from an illuminated manuscript.

Next, he set about transforming the outlines into large-scale sculptural objects, increasing their size six- or seven-fold. He replicated the outlines in wood (bronze would be too heavy, not to mention expensive, he says) and covered them in copper leaf. At Finch Lane Gallery, where more than a dozen are on exhibit, along with some of the works on paper, these sculptures are suspended from the walls, the light shimmering off the warm copper textures and casting shadows that make the works appear to float. True to his intention, they take on the aura of ceremonial objects, similar to the sort of thing, he imagined, one would carry in a procession.

He calls the works “Glyphs,” invoking a sense of ancient symbols, waiting to be deciphered. “I see the beetle tracks as calligraphic characters from an unknown language,” he says in an explanatory note on his website. “They don’t have individual, specific meanings, like, say, a Chinese character might have. The beetle trails wander, but their paths form linear, calligraphic marks such as might be seen in an ancient manuscript. In the woods, there are thousands of beetles, in thousands of trees, and each one leaves a trail as different as a fingerprint and as elegant as a Sultan’s signature.”

Looking for help in understanding what he was studying and using as source material, Frazer came into contact with Diana Six, a University of Montana, Missoula,professor whose work has been featured in National Geographic. She’s the one who broke the news: the lines he traced were the work of the wood-boring beetle, not the devastating bark beetle.

“Someone who knows what they are doing will know which is which,” he quipped during an artist talk at the exhibit’s opening reception on March 1st. The bark beetle galleries, as he learned, are characterized by a central line, where the eggs are laid; then, as the larvae hatch they burrow and spread out in radiating lines so the whole looks like a multilimbed mutant daddy long-legs. The lines of the wood-boring beetle have no central organizing principle: they swoop and swirl in random shapes. Images and sculptures based on both species are in the exhibition. For the bark-beetle glyphs, Frazer referenced illustrations created by naturalist A. D. Hopkins at the turn of the 20th century.

Both beetles are part of a natural process of decay, feeding (usually) on dead wood and helping forests to decompose. One lives beneath the bark, the other bores through it to reach the wood. They are both harbingers of the threats of climate change, as well. Warming climate has meant that beetles live longer and reproduce more. In an odd year of warmth, this might have meant a surge in and the destruction of an isolated region. Now, with decades of warming temperatures, beetles have swept across the Rocky Mountains. They have expanded their range, the warmth allowing them to spread to higher elevations where they feed on species of trees with fewer natural defenses. The result is devastated forests, which,in turn, can devastate whole ecosystems.

The message in these glyphs is not reassuring. True to his artistic calling, Frazer has taken this simple natural process and made it, first, precious, and then, ominous. The delicate paper works invite inspection, while the sculptures overwhelm: they are a shout, as opposed to a whisper. While making the sculptures, Frazer says he imagined them as objects discovered and puzzled over by a future civilization. The future anthropologists might well wonder at their use, at their relationship to similar objects of veneration — the radiating galleries of the bark beetle a cousin to Shiva, multiarmed Hindu god of destruction. They might find in them, as we might, a sense of reverence, coming from fear as much as from love and awe. 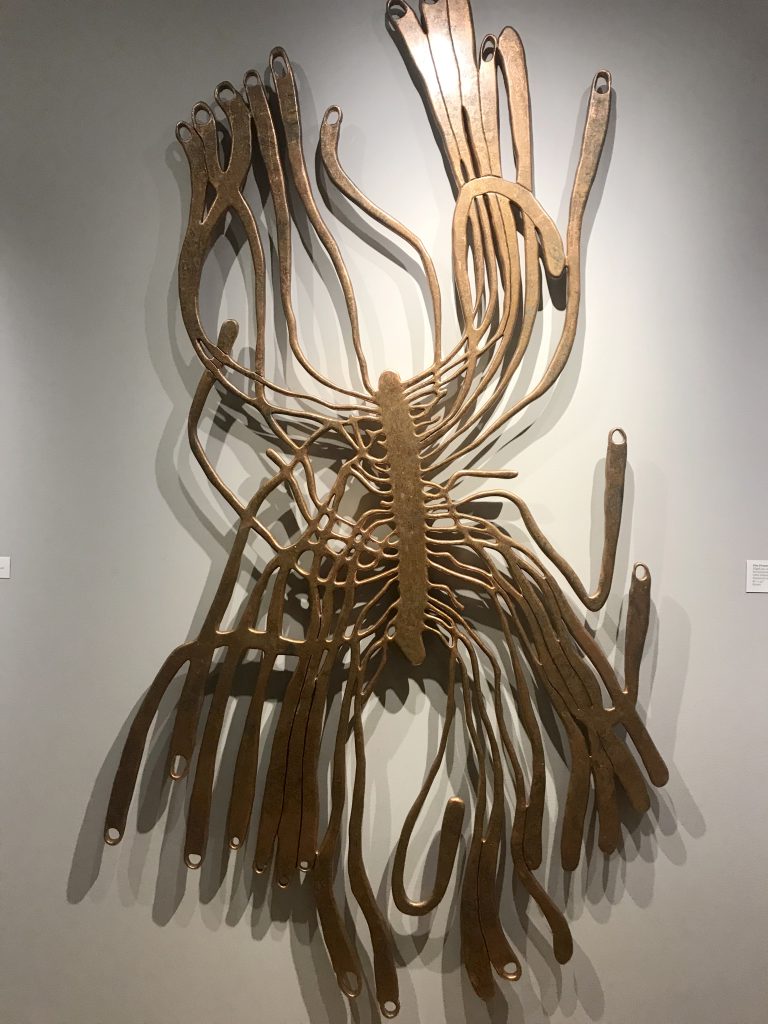 The sculptural iteration of “Glyph 35” shoes the distinctive gallery structure of the bark beetle.