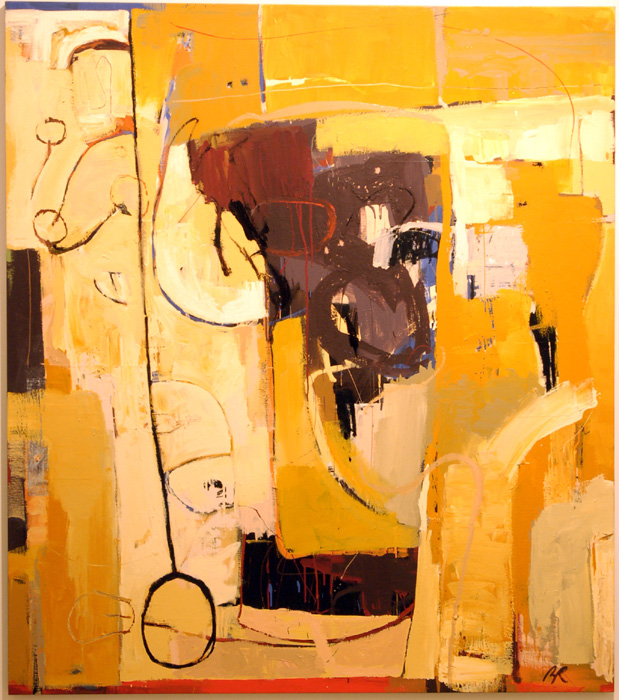 The art of the Western world has thrived because it has existed in a generally recognized and appreciated visual vocabulary. Generally speaking, a Carravagio will elicit similar effects from most viewers. A Raphael will allow reverence, a Rembrandt awe and wonder. Poussin is calm. David conveys intense desire to act, Gericault, a sublime flood of powerful emotion. With modernism, and its desire to shock the middle class, things changed. The object itself took center stage, to the exclusion of the subject viewing it, so that unless you are well-versed, you will miss the point. This does not keep the dilettante from enjoying aspects of modern painting: feeling the harmony in a Mondrian, the fun of Picasso, the mysticism of a Rothko, the boldness of Rauschenberg. But a viewer might miss the point entirely with Pollock and say “what?” About Malevich’s “Black monochrome,” most visitors to a gallery in a museum will have a blank stare at something they simply don’t understand. There is still and always will be comments from the populace to Impressionists such as Pissarro… “Look, if you stand too close all you see are splotches, but if you stand far away, wow, you can see the whole picture!” A true comment, but a more apt reading would probably run along the lines of “Do you see how the cottage appears golden on the brown as the light infiltrating from the upper left beyond hits it just so… what a remarkable use of light creating such a hue…and such Realism.” Maybe there is a reason why people laugh, (although it hurts our ears) and mock contemporary art and gravitate to the Thomas Kinkades of the art world.

At the Woodbury Invitational in Orem, I experienced a phenomenon that I feel is a growing aspect of art today: a return to the subjective experience. The opening, richly adorned with food and piano music, was well attended. As a critic, observant and alone, I watched the people as much as I did the art and how they reacted to it.

The Woodbury Invitational, and much of the art of today, bears a certain characteristic. Using a painting from each artist, I will attempt to describe what I saw in the Woodbury that night — a phenomenon really, not merely just a look at a work of art.

Room One, Painting One: “New Black”
In the opening room, a cycle of abstractions by Bruce Robertson grabbed me as abstraction rarely does. His “New Black,” something that is truly 21st-century pure abstraction, is highly developed in construction and composition, inventive in its handling of segments, and peppered with touches of iconography without defying the painting’s purity. The color filled the individual gallery, encouraging one to meditate and ponder, stop for a while and revel in it. But that’s it, that’s my point. I do realize that pure abstraction is meant to be seen and then felt. But as my point introduced earlier suggests, the range of experience in a De Kooning or an Ad Reinhardt or a Hoffman, Motherwell or a Still: these paintings were created for objectivity, a directive. And to the untrained eye the subjective experience is limited. But in “New Black” there is no objectivity, just pure art — good art. One hardly wants to leave this gallery . . . the pieces are almost palpable. 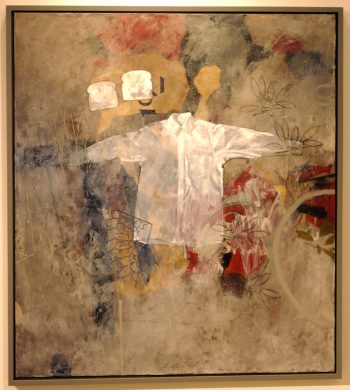 Room Two, Painting Two: “Look Again”
The second room and the conversation I had there with the artist, Gary Barton, is the source of inspiration for this article. Barton’s cycle of work is a truly post-modern appropriation of objects, painting methods, icons, styles, technique, references and images. I overheard the artist say to someone that these paintings could be read as entities (many of the paintings have a translucent shirt in the center amidst all else). When I asked him about this he said yes, but that it was not really the point. He mentioned these paintings could be read as beings in and of themselves, but also they could be seen as narratives. They contain all the elements whereby anyone could create an identity, a narrative, a story, an experience, invoke memories and draw emotion. That is the point. It seemed as if this was actually happening due to the crowdedness of this individual gallery and the close proximity of the faces of the viewer to the painting and eyes that truly seemed to be searching.
Room Three, Painting Three: “Clear Cut/Two World”
I saw these paintings by Catherine Downing as dense abstractions yet figural — they had literal subjects. The works were painted almost garishly, cursorily and often in an uncannily Turneresque manner. The range and variation of form and subject was remarkable. The artist stated that her intention was to create depictions of devastation in the Amazon, but that was only a concept to allow her to focus on a breadth of subjects: forests burning, stormy seas, tempests, apocalyptic landscapes. Yet is this a depressing, dreary collection? Easily not. I was almost amused and in an ironic frame of mind as I looked at the paintings. The artist mentioned we all have notions of “starting over,” a back to nature sort of idea. More is alluded to in this cycle than just disaster — for instance, the reference to the future. The people in this room seemed to converse more. It appeared as if there was a dialogue, or discussion consuming the room. 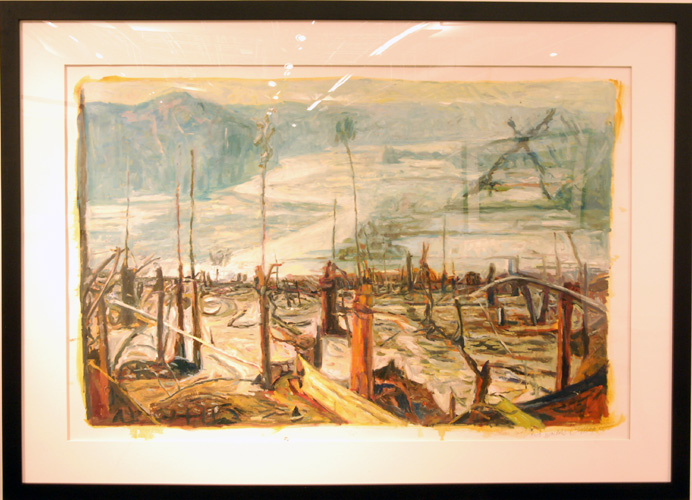 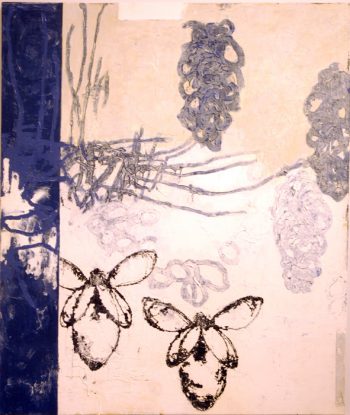 Room Four, Painting Four: “Moon”
What painting entitled “Moon” could fail to have a highly relative appeal and relevance to a wide audience? Ethereal, logical, yet emotive; symbolic yet transcendent. Transcendence is the key to unlocking this picture, by John O’Connell, and I will generalize in a way that applies to other rooms as well: an interpretation is in the mind’s eye. Here, certainly, beauty is in the eye of the beholder.

Room Five, Painting Five: “Layers I, II, III”
For me, this room was the climax of the exhibit, although it was the least occupied. The artist used images — sometimes whole, sometimes spliced and put together vertically — in black and white using different textures and printing techniques. Yet remarkably, each section of paper conveys an individual. For example, a head would consist of five vertical strips each taken of a different sitter. The relevance of the room, to me, was that each sliver of paper and the individual conveyed a certain emotion. “Layers I, II, III” is made up of three vague, obscured frontal images of a woman in the fetal position, facing the camera, head down and bent in. Not only is there emotion in this room for all to relate to, but the image that absorbed me, seemingly portraying anxiety, calmed me. 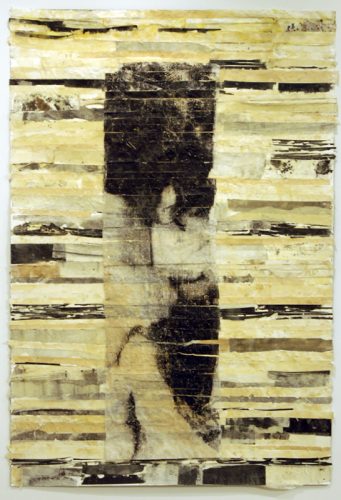 The Woodbury Invitational, on display through the end of the month, demonstrates contemporary art with a free flow of ideas and significance, art that all can enjoy, and find meaning in. This phenomenon at the Woodbury Invitational, is hopefully becoming increasingly pervasive, and more and more, the arts will be something that all, not just the cognoscenti, can enjoy in the experience.