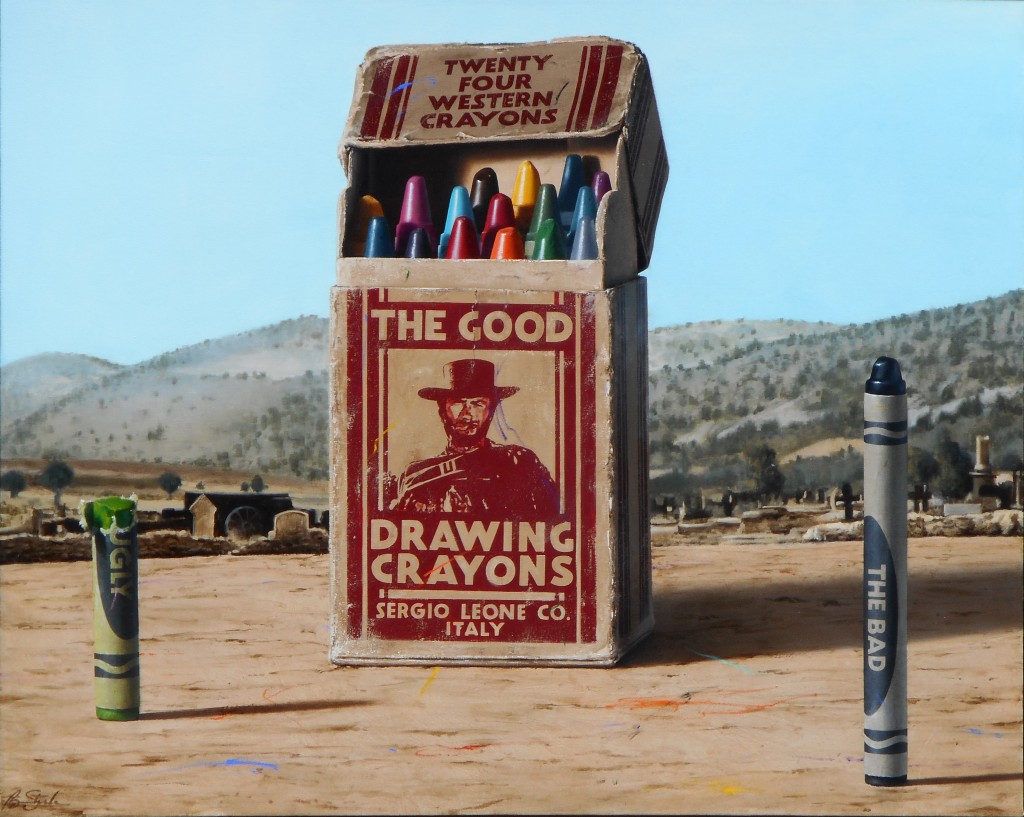 Exhibiting at Modern West Fine Art this month, the traditionally trained painter Ben Steele chooses subjects that hark back to a universal and nostalgic American childhood. From Kennewick, Washington, and educated first at the University of Utah and then at the apprenticeship program in Helper—under the instruction of artists David Dornan and Paul Davis—Steele’s Western background informs pieces that are emotionally charged because of their engagement with American symbols and myths. With references to Westward expansion, the growth of Hollywood, and the glamour of larger-than-life American celebrities like Marilyn Monroe, Clint Eastwood, and Abraham Lincoln, the resulting pieces are playful and tinged with nostalgia for an America that exists in the collective imagination.

The American West depicted in Steele’s pieces is reflective of iconic, if not strictly bread-and-butter historical, history. In “The Good Drawing Crayons,” Clint Eastwood gives viewers a steely stare from a crayon box, with a crayon labeled “good” and “ugly” sitting nearby in a desert landscape. These callbacks to the West of film and lore are meant to stoke viewers’ memories of cowboy firefights, and the action that has always been part of the “Manifest Destiny” myth.

The subjects and emotional impact of his pictures lie in the stylized realm of Hollywood and pop culture. They include legends of American history, with “Monument Valley” combining the Western landscape with American architectural icons—like the Statue of Liberty— and figures that defined the political and cultural history of the country, including George Washington and Theodore Roosevelt. The amalgamation of American subjects in Steele’s work are part of an emotional lexicon for multiple generations of Americans who were raised with these charged symbols as part of their own understanding of themselves and the land in which they grew up.

Steele uses oil paint to imitate other media such as crayons, chalk, and even the magnetic pigment particles in Etch A Sketch toys. He says that he “loves to mimic materials” and that a “Q-tip and dry oils works well to create the waxy texture of crayons on the canvas.” Steele’s classical painting training and penchant for photo-realistic attention to detail creates a trompe-l’œil effect and causes viewers to double-take at pieces like “Sketching Bull,” which depicts the famous Sitting Bull expertly drawn in a giant Etch A Sketch.

Steele doesn’t stop at re-creating textures, famous portraits, or household products on his canvases. His “Spaghetti Western” series (blue, green, and ochre versions) have a base layer of black-and-white prints, which were taken from Steele’s original painting of a spaghetti-sauce container (with Clint Eastwood emblazoned on the label). These prints were then covered with an overlay of colored brushstrokes to give them each a distinct feel. These mixed-media pieces show that Steele isn’t shy about subjecting his own finished work to the same kind of scrutiny he does historical artists. Like so many parts of American culture, Steele dissects, reproduces, and reimagines his own finished works.

The layers of reference and homage reflect the adage that there’s “nothing new under the sun,” but by tying American art and pop culture together in these images, Steele gives viewers a new awareness of what makes up American culture and identity. With playfulness and biting wit, his works stake territory in the history of art for fellow New World artists, as well as Steele himself.

Ben Steele: The Good, The Bad and The Ugly is at Modern West Fine Art in Salt Lake City through January 14, 2017.