“Works by famous men upstairs, and feminist art that will get you mad at the patriarchy (though hopefully not your patriarch) downstairs.” That’s the text message I sent to my teenage daughter, telling her that if she and her friends were looking for something to do that Friday evening, they might visit the exhibition openings at the Utah Museum of Contemporary Art.

My description of the upstairs exhibition wasn’t completely accurate. Of the 13 artists featured in Utah Collects: Contemporary Collecting Practices, two are women. Tauba Auerbach and Mira Lehr will not be household names to the average patron, however, not in the way Andy Warhol, Takashi Murakami and Robert Motherwell — three of the men whose works are on display — would be.

If you’re wondering why that is, you should step downstairs, where Guerrilla Girls includes works spanning a quarter-century from the subversive collective of anonymous artist agitators. They burst on the New York City art scene in the mid-’80s with a series of posters decrying the racial and gender imbalances of the art world. To protect themselves from backlash, they donned gorilla masks and took on pseudonyms from famous women artists like Frida Kahlo and Käthe Kollwitz. If they were to see UMOCA’s upstairs show, they might create a poster that reads, “Only 15% of the artists in private Utah collections are women.”

There is plenty that will get you mad at the patriarchy in this exhibit. It might be the art critics who don’t write enough about women: Peter Schjeldahl, Hilton Kramer, Donald Kuspit, Calvin Tomkins, Peter Plagens and others were called out in 1985 for writing less than 20% of the time about one-person shows featuring women. Galleries like Mary Boone, Leo Castelli, Dia, and Marlborough received similar opprobium for showing no more than 10% women artists. The most effective of the Guerrilla Girls’ works is probably the billboard that remains etched in people’s memory for the visual of a gorilla mask on the top of Ingres’ Grand Odalisque, and the question “Do women have to be naked to get into the Met. Museum?” Less than 5% of the artists in the museum’s modern art section are women, a smaller font explains, but 85% of the nudes are female.

Over the years, the Guerrilla Girls expanded their critiques to include larger issues like rape and domestic violence, though the art world remained a principal focus: one poster pairs minimalist artist Carl Andre, who was acquitted for the murder of his wife and fellow artist Ana Mendieta, with O.J. Simpson. 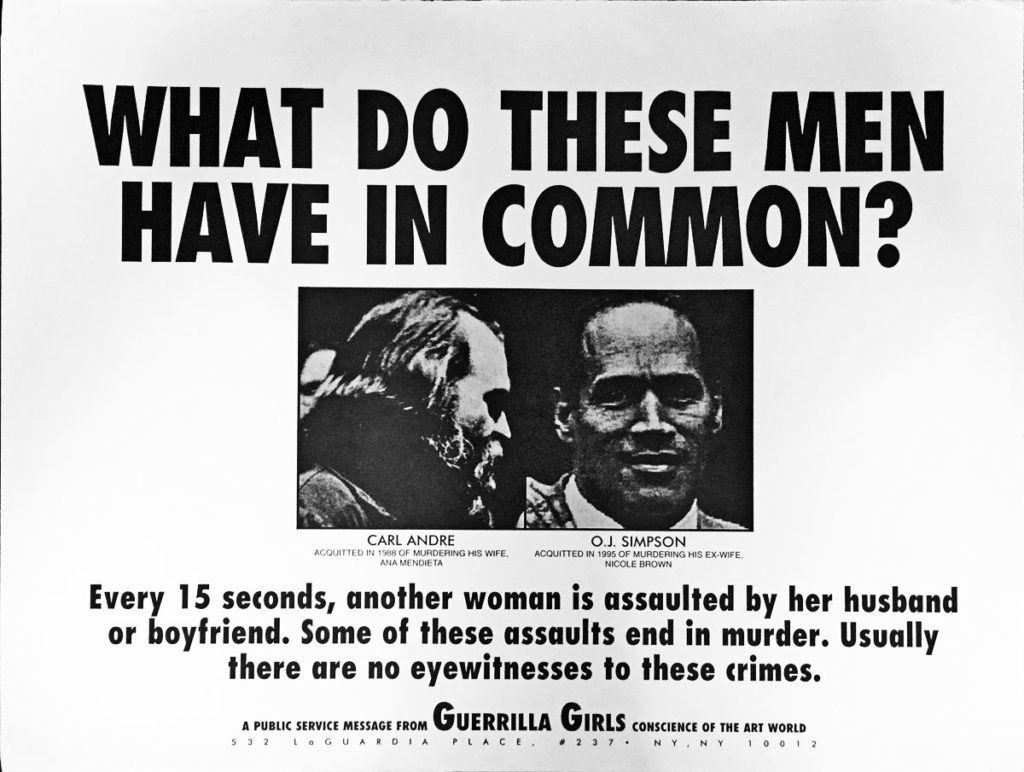 Working your way around the exhibit — it begins in 1984 and ends in 2016 — you may be struck by how much what was happening in the mid-’80s is still going on today. Thirty years later, issues brought up by the Guerrilla Girls are front and center in our national discourse. Their methodologies have also proven to be prescient: Their pithy posters are an analog version of internet memes; their use of anonymity has become a prominent part of our social discourse; and their 1985 poster calling out individual artists for being represented by galleries that showed few, if any, women artists, prefigures aspects of our current call-out culture.

What may also strike you when you reach the end of Guerrilla Girls is how much has or hasn’t changed. In 1985, 18 major galleries were called out for featuring no more than 10% women artists. In 2014, for a similar though not completely identical list, it was 20%. In 1985, of the four major New York City museums, only one featured a one-person exhibition for a woman artist. In 2015, at the same museums, the number had risen to 5. Depending on whether you’re a glass-half-full- or glass-half-empty type of person, you may see this as positive change or continued reason for rage.

What you may also notice is that the Guerrilla Girls critique is, for the most part, local. It’s principally about New York City, which, granted, in the 1980s, when Guerrilla Girls began their agitprop, was the art world (and their home turf). Since, the art world has become more dispersed if not necessarily more diverse. One suspects if local chapters sprung up in London, Tokyo, or Buenas Aires, its members would not be lacking in material. One of the posters at UMOCA reads simply “It’s Even Worse in Europe.”

What about a Utah chapter?

A local chapter of Guerrilla Girls might point out — as we noted at the top — the disparity found in Utah collections represented by UMOCA’s upstairs exhibit. As a rejoinder, however, someone (probably a member of UMOCa staff) could point out that the museum did give the Guerrilla Girls the main space. Or that of the three other exhibits currently at the museum, two focus on women artists. And digging a little deeper, a look at the titles found on the first four pages of UMOCA’s “past exhibitions” section of their website indicates more women have been exhibited than men. There are many ways to count an issue of this nature (and we invite you to add your own calculations in the comments), but at least at UMOCA things are not looking too bad.*

Taking a slightly broader view, Guerrilla Girls SLC would find that at Salt Lake City’s February Gallery Stroll, 45% of the artists mentioned in listings by name are women. Outside of Salt Lake City, looking at the main exhibition venues with shows by individual artists, the genders came closer to parity.

Several of the Guerrilla Girls’ attacks are directed at art critics and publications, so we took a look at our own work at 15 Bytes. For our Artist Profile, our main monthly feature, 48% of the articles over the past five years were on women. A quick look at the titles of our exhibition reviews over the past two years indicates women were written about 46% of the time. For the literary arts, that gender imbalance is flipped, with 51% of the reviews since we began running them about female authors. For our Utah’s 15 projects, 57% of the artists selected by our readers as the state’s most influential have been women.

These numbers for the Utah art scene don’t always reach parity, but they’re nothing like the numbers in New York. Is this the result of the matriarchy in Utah?

At first blush, that seems an odd way to describe our state, but taking a look at our institutional venues — from government institutions and university museums to galleries and nonprofits — only three, by our count, have male directors: Gallery East in Price, the BYU Museum of Art in Provo, and the Utah Arts Alliance in Salt Lake City. Sears, SUMA, The Granary, Woodbury Museum, UMFA, UMOCA, UDAM, Salt Lake Arts Council, Shaw Gallery, NEHMA, Art Access, BDAC, St. George Art Museum, Saltgrass Printmakers, Springville Museum of Art, Kimball Art Center are all led by women. A majority of the commercial galleries in the state are also run by women.

We shouldn’t get too congratulatory, however. The art departments at our colleges and universities are a different matter: 73 percent of faculty are male (a number that might be ameliorated if one took into consideration all adjunct faculty or included art history faculty). And that’s in departments where the students are predominantly female.

Institutional imbalances of this sort are never due to causes that are black and white. As even the Guerrilla Girls point out, the problem cannot be ascribed solely to men: The gender imbalance coverage at Artforum (in the Guerrilla Girls’ poster, “Artforhim”) wasn’t much different (and in some respects was actually worse) under female editors. Locally, while two-thirds of the acquisitions board at the Utah Division of Arts and Museums is female, recent acquisitions and commissions are still dominated by men (73%). And, at the risk of delving into the anecdotal, one female art professor in Utah discussing the issue remarked that her female students are much more critical of their female professors than their male ones.

Is our recurring 35×35 exhibition, which has always been dominated by women, bias against men? Or is it because the majority of submissions (which are judged blindly) are by women? If a 15 Bytes feature like “What’s New” or “Who Do You Love?” includes more responses by men than women, is that because the editor or the questions posed are sexist? Or could it be because more men than women responded to an email? 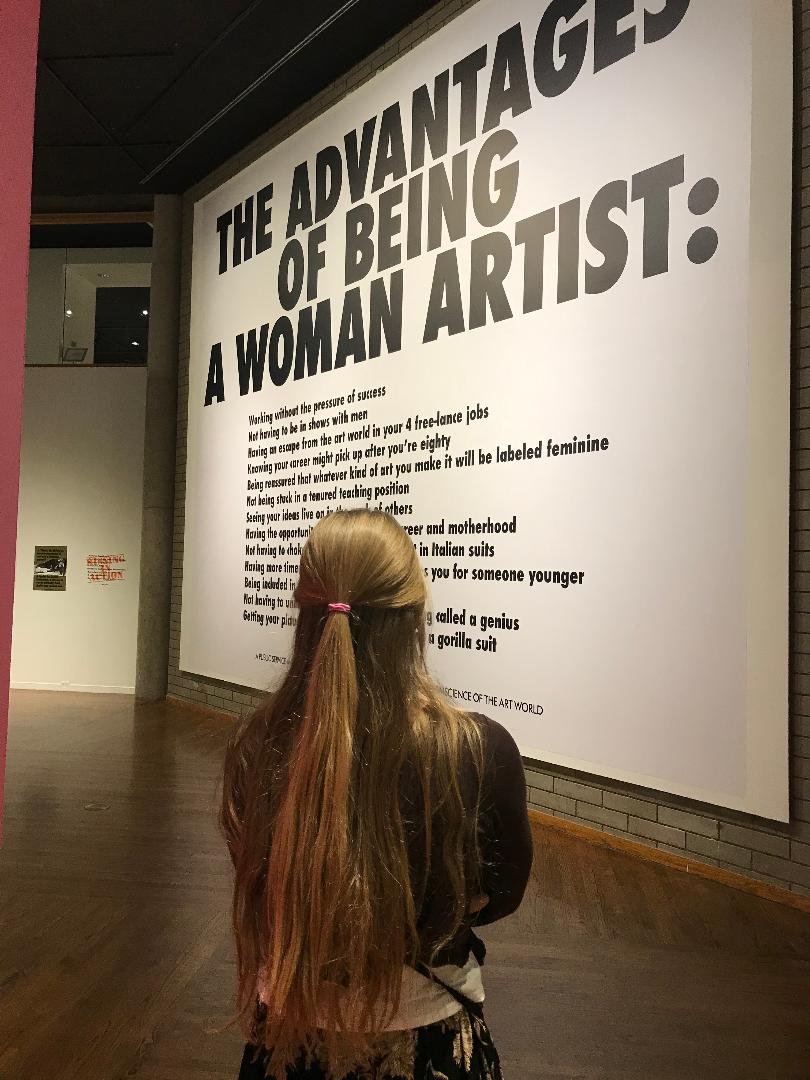 As the Guerrilla Girls have pointed out, however, passing the buck is a frequent response. A critic can only write about what is exhibited, and if most galleries show work by men, coverage will reflect that, the argument would go. And then continue: a gallery is a business, and if they predominantly show art by men, it may be because they sell better; a collector can only buy what is on offer; and a museum relies (in part) on donations by collectors.

It’s also a dangerous response. The problem, as one poster at UMOCA points out, is that if museums reduce what our sense of art is to the “small number of artists who have won a popularity contest among big-time dealers, curators and collectors … they’re not showing the history of art, they are just preserving the history of wealth and power.”

Is it possible that the Utah art world doesn’t have as much of a gender problem because there’s not as much money involved? Are the poor flyover states a better representation of what’s going on in the art world than the rich coastal behemoths?

Systematic imbalances are driven by a number of complicated factors and a guerrilla organization trying to overthrow a system is not going to do the same work as a sociologist, with peer review and footnotes and complicated algorithms. But, as the Guerrilla Girls exhibit makes clear, there is definitely a problem. Especially in New York.

*The numbers indicated above have not been subjected to peer review and should be considered a rough count. We invite our readers to do their own tabulations and analysis and include their results in the comments below.