I Am You @ the Rio Eva Jorgensen, Zuzanna Smolarkiewicz, & Chelsea Hertford Taylor 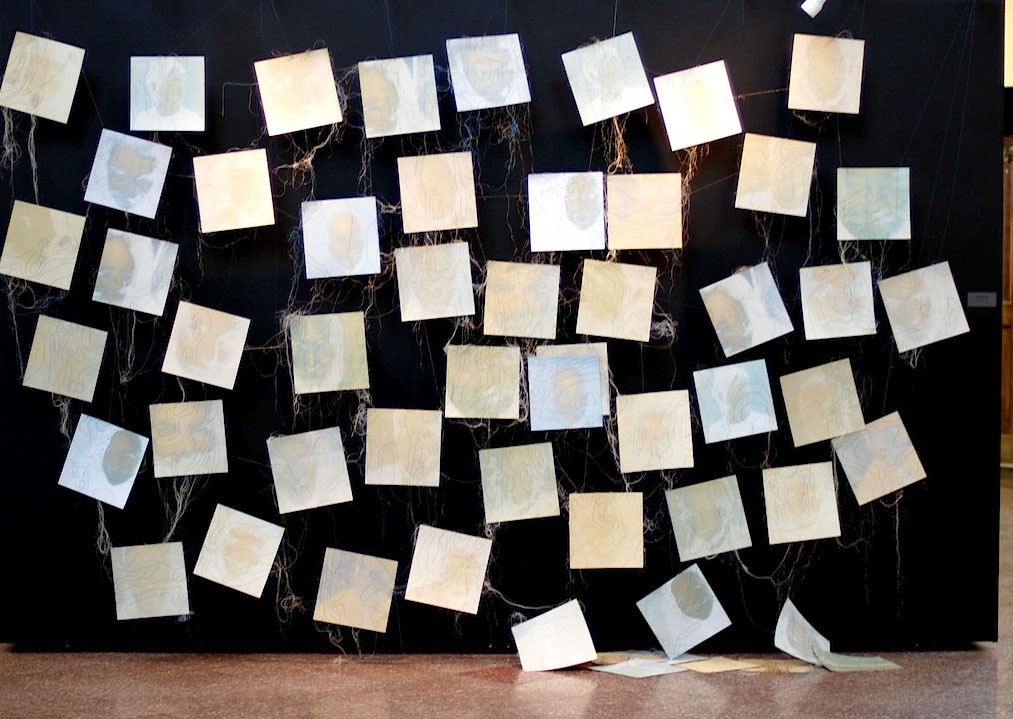 Some years ago I was standing with a friend, looking up at the night sky, when she suddenly announced that she could see a face in the full moon’s disk. Yes, I replied: the Man in the Moon. Then she explained that in her forties she still thought that was only a figure of speech. But there it was: a face looking down from the night sky. We humans discover our visages in all sorts of contexts; it’s a survival skill we’re good at. But the three artists showing at the Rio Gallery are also adept at inverting the process. What they do, instead of putting faces on things, is to project things—like environment, biography, and history—onto the images of their subjects. I Am Youshowcases the remarkable visual inventions of these young artists, each still a graduate student but already pushing the envelope of her primary medium. Novelty for its own sake has been one of the signposts of modernism, but here originality is something more than mere noise: each has forged her own visual language and thereby found a way to tell more by telling differently.

Leonardo da Vinci claims that every portrait contains a self–portrait. Eva Pollock Jorgensen deliberately seeks her self-portrait in the faces of those around her. In works ranging from small prints to wall–sized ensembles she unites two of today’s most energetic, least exhausted mediums—print and fiber—to form metaphorically rich variations. Not content with new material combinations and effects, she finds strong affinity between those and her perceptions of the subject matter, producing works that convey fresh insights in compelling new ways.

The smaller pieces, which could almost be mistaken for conventional hand-pulled prints, are the more technically and metaphorically complex, combining traditional colored ink imagery, images printed in the same color as the support, colorless embossed figures unrelated to the inked images, and lines stitched in on a sewing machine. By turns ornamental, sensual, or semantic, this extended range of marks makes for texture and text: the latter an implied narrative voice commenting on a story even as it is being told. 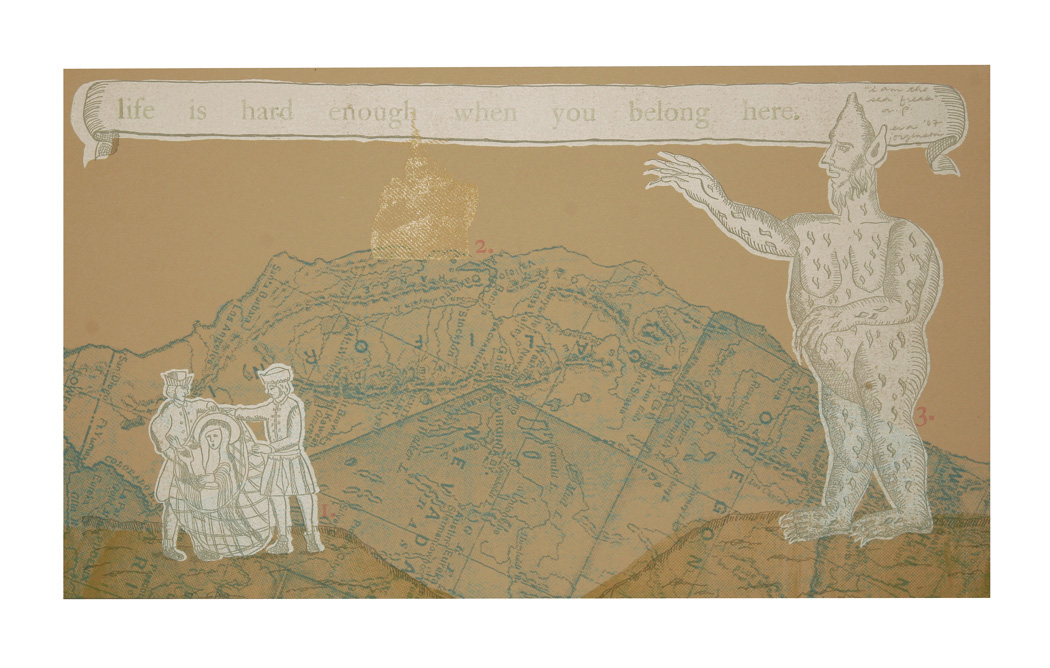 “I Am the Sea Freak” by Eva Jorgensen

Ironically appropriate for Utah (the floor of an ancient sea that left its marks everywhere) Jorgensen’s vivid imaginings often take nautical shape. What at first appears to be the title character in “I Am the Sea Freak” stands before a seascape of waves drawn from maps of the California coastline. Or the “sea freak” may be the woman in the mid-ground captured in a net by sailors. This vignette, taken from an old illustration and interposed between the shaky line drawing in front and the precisely rendered maps behind, suggests another meaning for “freak”—one who is captivated—and may account for the apparent sympathy of the alien creature, who gestures toward her. The roles are murky, but the meaning is clear from the inscription: Life is hard enough when you belong here. We emerged from the ocean to live in desert lands; many of us prefer those coastlines closest to our original homes, and our doom is to forever see beyond boundaries we cannot cross. 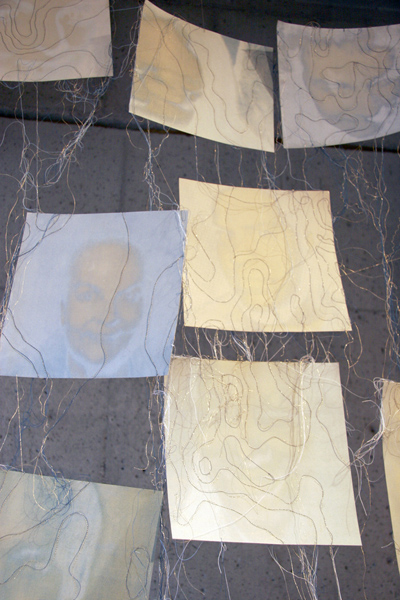 Jorgensen’s large works form composite portraits of whole communities, stressing connections within the group while suggesting how identity emerges from their sum. In “reCollection (Provo)”, these connections are made elaborately evident by a web of threads connecting and articulating numerous individual faces. Printed on loose sheets of metallic-finish paper with a reflective surface that sometimes causes the negative image to flip to positive, each face is over-sewn with lines of thread that sometimes ignore the face, but at other times follow its forms like the lines on a contour map. At the edges of each portrait these lines twist off into space, forming tangles that eventually link it to the surrounding pages. The idea of a community as a web of connections isn’t new, but what emerges here is a palpable sense of its complexity, delicacy, and yet the ultimate strength of that web: even greater, it would seem, than that of the individuals who comprise it.

Polish-born, New York-educated photographer Zuzanna Smolarkiewicz’s cosmopolitan background finds an outlet in the technical sophistication she acquired while taking commercial product shots. Many photographers make a living doing portraits and weddings, but Smolarkiewicz doesn’t make the kind of portraits paying customers want, and it’s hard to imagine her subjects in white dresses. Her style feels familiar from much contemporary photography — not just different from, but antagonistic to studio conventions — but her careful attention to craft in her representations bespeaks an affection for her subjects that goes hand in hand with the way her uniformly unflinching eye conveys respect for their integrity. 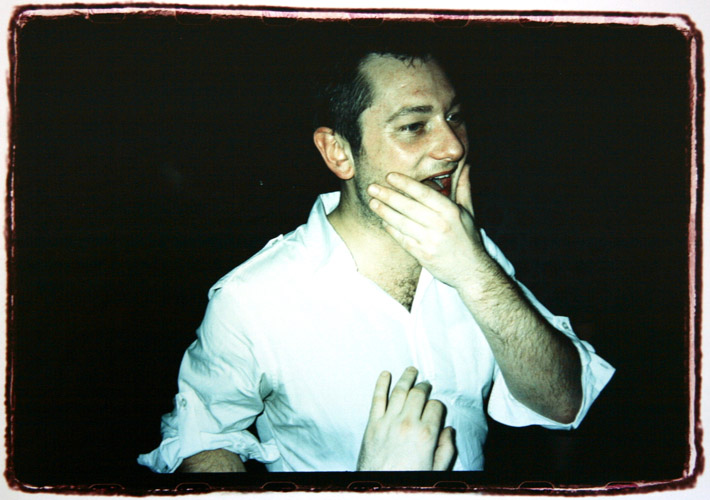 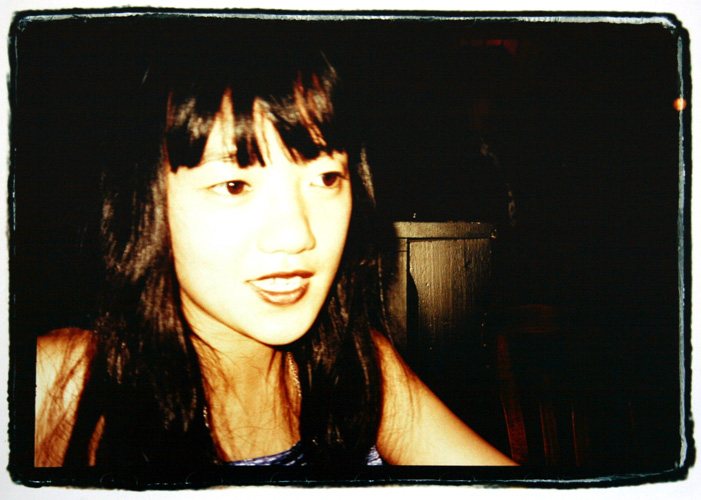 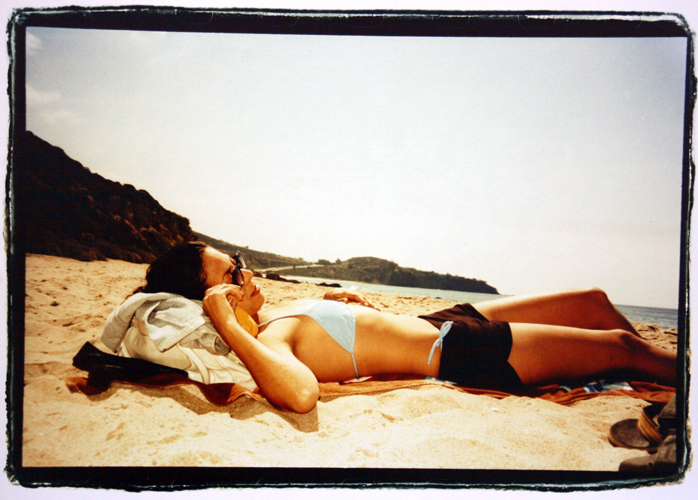 Here again the larger work is an ensemble. The enigmatically titled “May I Miss You the Most” includes 24 “C” prints, each resembling a candid snapshot. Individuals and settings recur occasionally, as if drawn from a group of friends seen in their common haunts. Everyone is appropriately dressed for the bars and beaches where they were shot. Poses, if anyone is actually posing, are casual and available light is the rule. In a reflex nod to photographic candor, the negatives are printed full-frame, including the edges of sprocket holes that also identify the format as 35mm. At first so much severe image making alienates the eye, making the work hard to enter into, and viewers may be tempted to pass by without looking closer. Yet this feeling mimics how such an inner circle might close ranks against a stranger. Closer inspection reveals how much Smolarkiewicz’s camera has penetrated that resistance. One possible, unwelcome reading requires realizing that every portrait is also a mirror held up to the viewer.

In “May I Miss You the Most,” contrast between the subjects’ casual self-presentation and the photographer’s attention to technique creates distance between them. A series of individual “Reflections” close that gap with an intimate point of view and grease pencil comments handwritten in the margin. That the artist here addresses her subjects is syntactically clear from lines like “I photographed you…” from “Reflection on Lynn,” but they are also poignantly felt: “Reflections on Liz” includes the words, I hate you almost as much as I love you / but mostly I just miss you. 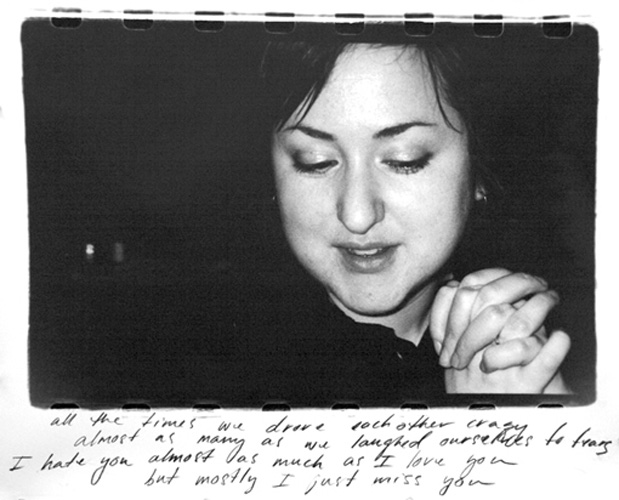 Smolarkiewicz sometimes indulges in rhetorical image making. “Do me a favor and start flattering yourself” features a blond woman with a blank expression standing before a curtain made from a wild jungle print: the wallflower in captivity. Here as elsewhere she reminds us how difficult it is, in a world where photographs make up so much of our visual input, to find a truly new mode of expression.

All of watercolor painter Chelsea Hertford Taylor’s portraits consist of two or more images closely juxtaposed. Often they are on two or more separate sheets of paper collaged together. One image depicts the subject, seen so close up that the nose or cheek is enlarged while the chin and hands seem shrunken and powerless. The other proffers an extraneous object with no clear meaning or connection—the carcass of a wrecked bus or a T-shirt decorated with a digestive track—recalling the sort of haphazard associations that sent the Surrealists into raptures. 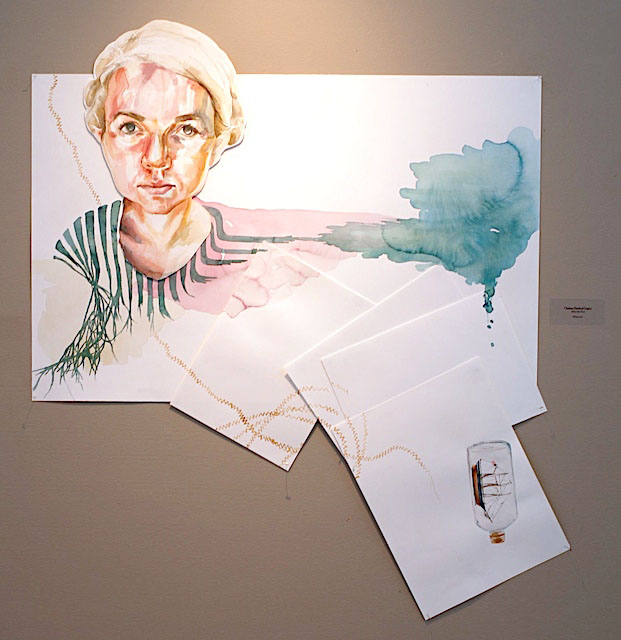 Chelsea Hertford Taylor, “After the Fact”

Absurdity is part of how Taylor sees the world, and anxiety is arguably the most frequent expression on her subjects’ faces. The artist shares this anxiety, and captures it by painting the heads so large they nearly defeat her medium. This is bravura painting, but the subtle washes that render flesh tones can only be controlled so far, and the completed faces threaten to fall apart at any time like so much understanding. Making a virtue of necessity, Taylor uses similar puddles of paint in the margins and other seemingly accidental marks to balance or energize her painted figures. In “After the Fact,” Taylor collages a face onto a torso painted separately, the stripes on its shoulders knotting together on one side and turning into a puddle of paint on the other. Beneath, four small pages spill across the space, carrying several zigzag lines that droop and finally lead to a depiction of a ship in a bottle. Be careful following this or any other lead, Taylor seems to suggest: where it leads us may not suit our needs, and the track once followed cannot be retraced. The most resonant title in the show may be her “Bad Paintings Happen to Good People.” 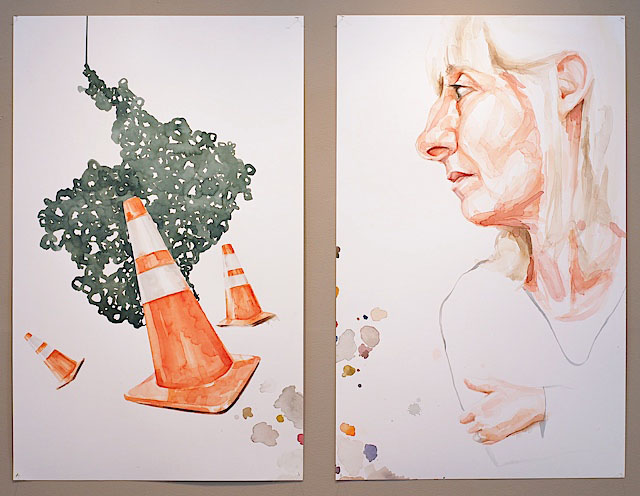 Ever since the 1980s, many persons who think art should carry something more than formal structure—something like content—have turned to women in search of new stories and different points of view. All three women at the Rio have new ways of looking at the persons who surround them. Just as importantly, they also have the ability to invent and discover new ways of showing what they have seen. 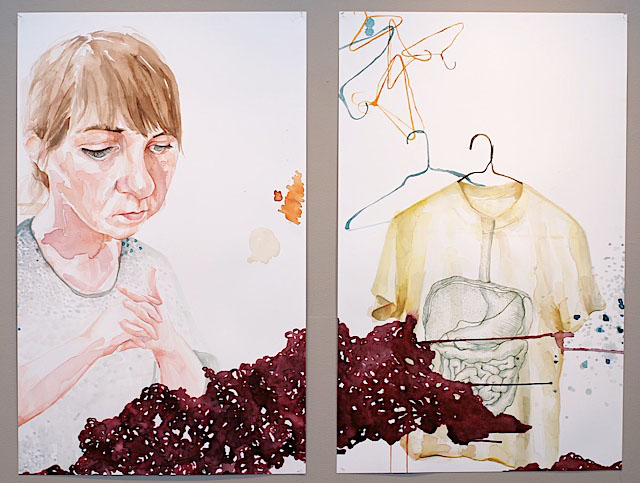 I Am You, featuring works by Eva Pollock Jorgensen, Zuzanna Smolarkiewicz, and Chelsea Hertford Taylor is at the Rio Gallerythrough June 9.