The course my art history research takes often leaves me emotional. I cannot comprehend the sacrifice that artists must make in order to put their talent and message out there. Maybe I’m too much of a New Age-Sensitive Guy, but learning about the struggles of now deceased Utah artists causes me to be grateful that I have no talent. I can cook, but if I fail at it, I can just dial “The Pie” and soon get their version of cooking — delivered. I receive zero criticism for my own efforts, just lovely pizza that helps me know that I always have a back-up.

One of my first exposures to David Howell Rosenbaum [1908-1982] was in my attorney’s office, where I viewed two well-balanced oil paintings hanging on his wall. Shane Topham told me some of Rosenbaum’s background as I stared at these two fine examples that capture Utah’s magnificent landscape. Rosenbaum carried my attention and as I have learned more about him in the past decade or so, I have become more sensitive to the far-too-many plights of artists. A morose, withdrawn man, who shunned radio, televisions and cars, he was one of Utah’s more accomplished landscape painters as well as being a talented portrait painter; he also liked to express his caustic personality in expressionist narrative paintings, throwing paint at Adolph Hitler as well as Pablo Picasso, and taking swipes at Modern Art in general.

According to fellow Art Nurd Janie Rogers, Rosenbaum’s family was among the first Russian Jews to convert to Mormonism and move to “Zion.” A Wikipedia entry about his great-grandfather, Morris David Rosenbaum, says he was from Fordon (then in Prussia, now in Poland), emigrated to the United States and joined the LDS Church after meeting Alexander Neibauer, the first Jewish convert to the LDS Church. He married one of Neibauer’s daughters, as well as a daughter of Apostle Lorenzo Snow. David Howell Rosenbaum’s own father was a salesman and still lived in Brigham City when Rosenbaum was born there in 1908. He was a pragmatic man who told the aspiring artist, “You can’t make a living painting. You’ve got to work.” When he was 23, Rosenbaum studied at Utah State under Calvin Fletcher, at about the time that Fletcher, mindful of the relatively dreadful art program at the school called upon such venerable artists as Birgen Sandzen, Ralph Stackpole, Otis Oldfield, and Ralph Pearson to serve as artists in residence at the Logan school. James Haseltine called the Logan group the “Ferment in the north,” and placed Rosenbaum with Henri Moser and Everett Thorpe as the only artists Utah produced who might be called expressionists (100 Years of Utah Painting, p. 35). Several years after his abbreviated studies with Fletcher, in 1938 Rosenbaum made his way to the American Artists School and Art Students’ League in New York for a year of structured training. Back in Utah, Rosenbaum painted under the auspices of the WPA, where he also performed art instruction as part of his employment agreement. The WPA purchased twenty or so of his paintings for use in public buildings. George Dibble, long-time art critic for The Salt Lake Tribune recalled an experience he had with one of these paintings. “I was admiring a painting by Howell Rosenbaum on the fourth floor of the Salt Lake City and County Building. It was an oil landscape…typical of the canvases of one who painted ardently and well. A quiet figure of a man in his mid-seventies inquired about my interest in the painting. I assured him it was a work that I had not seen for some time, by an artist whose paintings in the ‘30s and ‘40s were well-known on the local art scene. ‘This is not an outstanding painting,’ he said, and when I asked why he would say such a thing, he said, ‘Because I painted it.’” In 1941, Rosenbaum opened a studio in Ogden but it was not long before he was drafted into the Navy “Seebees,” the slang term for the Construction Band of engineers and laborers who created airfields, ports, and other military installations during World War II. In 1942, Rosenbaum was sent to Guadalcanal, where he painted energetically, working in watercolor and pastel because oil paints were unavailable. Mostly he painted the natives and the surrounding geography, including the jungle, and sent some 150 to 200 paintings home. The military was absent in the works, possibly because of Army policy but more likely because of the artist’s hatred for the Navy. “He hated that [military] with a passion,” said his brother, Paul, in a 1983 interview conducted by Kathy Bradford with him and his son, Paul A. Rosenbaum. In Guadalcanal, Rosenbaum contracted severe dysentery and was shipped back home to be treated at Bushnell, a military hospital located in Brigham City, where he was cured and discharged from the service.

In 1946, a group of his South Pacific paintings was exhibited, and in 1951 one of his figurative works won the state purchase award. Despite these successes, Rosenbaum became increasingly withdrawn. In their 1983 interview, the Rosenbaums remarked, “He didn’t want to be bothered. He never owned a car. He never had a telephone. He had a mailbox, but he didn’t want anybody delivering mail. He paid his rent up a year in advance so he wouldn’t have to be bothered writing checks. He didn’t have an alarm clock. He didn’t have a radio,” despite his love for classical music. Only three years before his death Rosenbaum finally acquired a TV, when his brother suggested that rather than carrying records all over the place he could listen to classical music on TV. When his brother visited he saw the TV had a big piece of cardboard on it. “I said, ‘What the hell’s that for?’ And he said, ‘Oh, I covered the damn screen up. I don’t want to see those idiots playing. I just want to hear the music.’”

Rosenbaum liked photography and attempted briefly to sell some of his pictures. He abandoned the commercial idea, but continued to travel—mostly to California—with friends and used his camera frequently. He continued to paint but became very frustrated with trying to play the game of selling art, and, according to gallerist David Ericson, for all intents and purposes ditched his painting career in the early ‘50s. How did he live? For 25 years Rosenbaum worked in Ogden at the Defense Depot as a warehouse janitor. Children at Play in Mantua, 1937, by David Howell Rosenbaum, 22 x 30, oil on board, courtesy Springville Museum of Art

In the last few years of his life, Rosenbaum’s outlook was as sour as ever. He told his family he didn’t want a funeral service, speakers, songs, or “anything like that. I just want to be cremated.” His brother Paul asked him, “Well, do you want your ashes spilled over Ogden from an airplane?” Rosenbaum replied, “No. Flush the damn things down the toilet.” Upon his death the family elected to forgo the “burial by facility,” and held a short dedication, placing his remains in the Brigham City Cemetery.

David Glover, a cousin (once removed) of Rosenbaum’s, says that after Rosenbaum’s death Vern Swanson was engaged by the family to catalog and evaluate the remaining Rosenbaum paintings. The Springville Museum of Art, Swanson’s institution, has in its inventory a number of choice Rosenbaum paintings including one of his strongest genre paintings, “Children at Play in Mantua.” 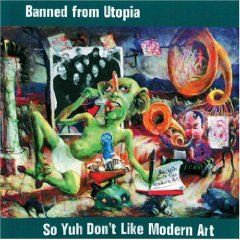 Album cover for Banned from Utopia

Glover also told me about Bruce Fowler, a California music producer, trombone player, and former member of a later vintage of Frank Zappa’s Mothers of Invention. Fowler, who now lives in Woodland Hills, is a Utah native and attended Skyline and the U (where his father was a professor of music). He’s also a great- grandson of early Utah artist and poet Alfred Lambourne (watch for a future column about Lambourne, one of the “Block Artists” and namer of Lake Blanche, among other interesting tidbits). He purchased a Howell Rosenbaum original painting for the album cover of Banned from Utopia’s 1988 “So Yuh Don’t Like Modern Art.” Note that on the cover a photo of the band has been slipped into the Rosenbaum painting.

The “Banned from Utopia” is an example of one of Rosenbaum’s caustic narratives, cynical though charming paintings that blasted, among other things, modern art. He especially had issues with Picasso and included him in three paintings. In the first painting, Picasso is seduced by a three-eyed, two-mouthed woman, a clear mocking of Picasso painting cubist-inspired portraits. Some have said that the bald subject in several Rosenbaum paintings are self-portraits.

The second painting, the one I frequently use to stun my audiences when lecturing, includes images of a classical painting being repulsed by tonic with the names of modernists on the labels. Picasso, Klee, Dufy, Matisse et al. are shown on the bottles that festoon the painting. Lastly, “Whoop-de-do” shows a crazed Picasso painting a gaudy modernist work with cat-tail brushes—using real cats! A Life magazine photographer skillfully shines his spot while taking his photo. Meanwhile, a smiling critic looks admiringly at the work while Rosenbaum (lower left) peaks around the goings-on. The portrait hanging on the wall reads, “Pablo Picasso, Father of us All.” It is trite to associate the darkness in an artist’s paintings to the darkness he feels, but like Van Gogh, one could gather obvious messages of depression from many of Rosenbaum’s artworks. The anger and contempt he spewed into his work is evident in his painting of Adolph Hitler, where burning books, ravens and skulls, a crucified Communist, as well as a chained young man (perhaps a self-portrait) surround der Fuhrer, who is comfortably seated with a copy of Mein Kampf opened at his feet. You be the judge about what it all means but the general dark theme coupled with limited value changes in the painting certainly do not make this painting one that you’d hang in your living room.

The Rosenbaums that people do hang on their walls are his landscapes, among the best executed at the time. The flashy landscape of Mantua [Logan Canyon area] is reminiscent of a familiar LeConte Stewart composition, but with enough color to drain two sets of inkjets. Although not known for his portraiture, Rosenbaum exhibited a credible talent for such things. On the reverse of his “Picasso Being Seduced by Modernism” painting is a very detailed portrait of a friend decked out in a Kramer shirt. His hands and jewelry details are expertly crafted and the cigarette holder is an attention-grabber.

Rosenbaum’s quirky existence is easily overshadowed by his talent and production of multiple works in his relatively short career. Had he been receptive to some strong direction and more philosophical approach, he would have no doubt experienced major acceptance. The pleasure of observing Rosenbaum’s fascinating body of work is punctuated by his tortured and relatively uncelebrated career. The emotion that I feel about such artists is mostly soothed by spending time with their works and understanding the difficulty of their career path.

Next month’s Alder’s Accounts will feature Pablo O’Higgins, whose works on paper will be on display at the UMFA beginning February 18.