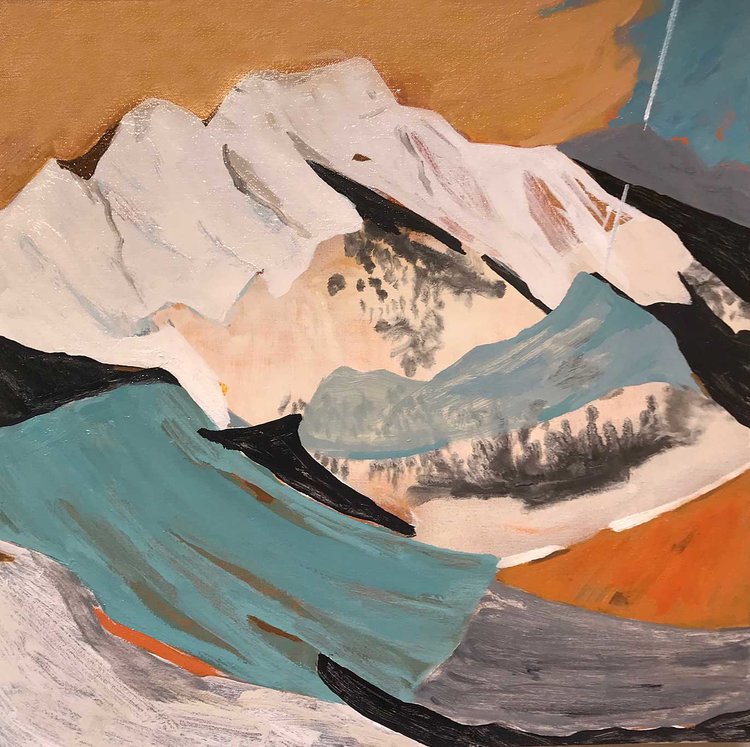 “There is much in the scenery to admire; mountain rising above mountain, precipice rising above precipice.” — Samuel Parker, Journal of an Exploring Tour: Beyond the Rocky Mountains in 1835

How do you review mountains, or paintings of mountains? Mountains too formidably, completely, contain all opposites: in paintings, every color and its opposite; geographically, mountains serve as both obstacles and guardian; both lookout and shield; pinnacular dryness, and, yet, the font of water; symbol/evidence of geographical disaster and upheaval, yet refuge for living things seeking beauty, shelter, solace, and privacy.

In 1835, Samuel Parker, from Ithaca, New York, wrote of his two-year expedition:

“…in every direction mountains were rising above mountains, and peaks above peaks, up to the region of perpetual snow . . . The common custom of the Indians . . . is to pass over the highest parts of the mountains, and to descend into the lowest valleys . . . we passed (at) the highest points, excepting one peak, which is nearly perpendicular, and rises like an immense castle or pyramid . . . composed of basalt . . .”

Old (he was age fifty-five at the start of his journey) Parker’s mountain-admiring words repeat, much like contemporary painter Jena Schmidt’s slip-sliding-away repeating colors repeat, setting up an almost paint-by-numbers recurring madness of color repetition. Colors slide toward her mountain’s bases, like streaming water or eventually-melting snow. In “Canyon Carry I,” you can trace like a rabbit’s tracks thin trail-lines of distant orange; in “Earth Talk I,” a mushroom gray and a dark slate green trade off with each other as if skiers.

“We rose early on the nineteenth. The inflammation in my head continuing, I bled myself copiously, which gave me some relief. Sometimes I found I was ready to say, I will perish in these wild, cold mountains . . . we were constantly ascending and descending. The thought I might be buried in these solitary mountains . . . (yet) every morning I rose refreshed by sleep.” 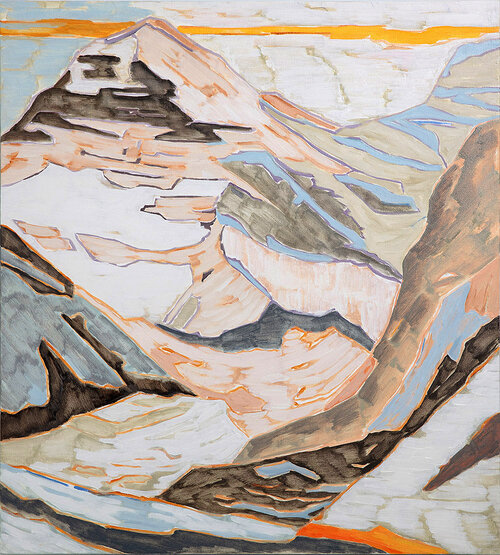 Schmidt’s paintings, like Parker’s journal are sometimes notational studies: in three paintings called “Mons Luma” one mountain is seen in three phases of light: morning, daytime, nighttime. Others, like “Whose Land II” and “Whose Land III” are shape-shifting maps, water and birch trees and land mass forming a shifting, tricking camouflage, her paintings’ titles suggesting Indian movement by canoe through water, and mocking land claims/titles. But a spiritual ownership is related to the explorer’s and the artist’s wish: to love, admire, emotionally claim. To own without purchase. In his journal, Parker admires his guide Indians, their expertness with horses, and their grace and judgement guiding canoes:

“The distant mountain tops were mellowed with the opening beams of the rising sun. It was a time for pleasing contemplations, such as banished all feelings of solitude, although no sound broke upon the ear, except the regularly timed strokes of the paddles of my Indians, who were urging forward the canoe with an accelerated velocity, greater than the current of the river would have carried us.”

But as if to cheer, Parker switches from reverie to practical and economic matters — tempering mountains’ difficult river passage with dreams of new American enterprise, ownership and gain:

“Frequently between the mountains there would be space enough only for a rushing stream of the purest water to find its way…can this section of country ever be inhabited, unless these mountains shall be brought low? But they may contain mines of treasures . . . forests for fuel . . . water power.” 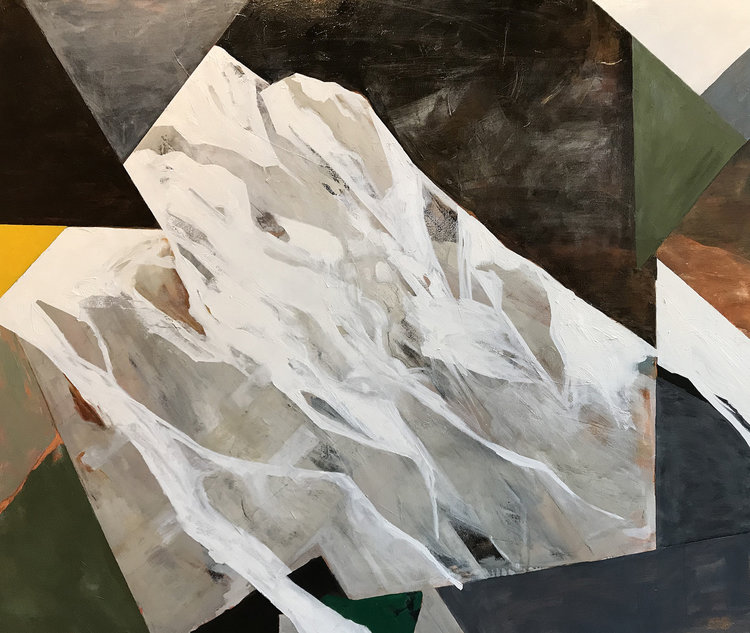 Schmidt’s glowering painting “A Part of Everything” has almost boomeranging abstract black and white triangles. These triangles so bravely placed in the painting somehow transport us to the future and then back to the present/past. These same triangles, black and white, strike, symphonically, important opposites of chill and warmth, light and dark: crucial mountain temperature/light set-points for both landscape explorers and landscape painters.

Melted mountain snow creates marvels, Parker notes. One mountain Parker encounters has a band of water leading to a waterfall which looks to him like a “white girdle,”and there is another place, “. . . a place ten miles above falls which the Indians call the tum tum, the same expression they use for the beating of the heart.” 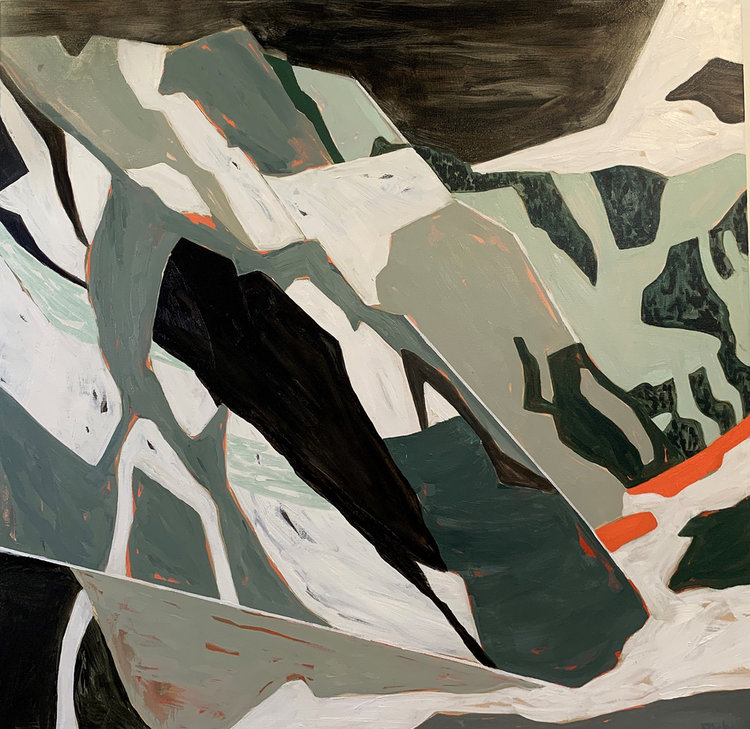 But an artist now is not constrained by artistic expectations of two centuries ago, being expected to use tiny repeated marks by quill pens and tote in saddlebags small glass bottles of India ink — see Schmidt’s “Earth Talk II” and “Peyto II”: in both, Schmidt’s moment-by-moment paint travels as if ruled by moving cloud-shadows, in broad swathes of paint.

Parker, a reverend, worries in his journal about mountain trappers, who often disappeared with no one knowing how they died: “What is the power and the privilege which draws these thousands from their home country, and their home, and all the ties of kindred? It is a hundred fifty years now white men have penetrated far into the forests in their canoes weighted with goods . . .”

But yet, explorers and journalists and artists – are they not, in their own way, dreaming, naïve, trappers too? Of image and illumination and truth and stories? Or perhaps this was Parker’s way of acknowledging his own similar bravery and foolishness and his desperate hope of transcendence: hoping his own exploring life might come to more than a trapper’s pile of pelts.

Here, two explorers: mountains claimed with words by Parker (explorer and missionary who returned to New York and lived till the age of 88), and mountains claimed by Schmidt (a contemporary Utah artist) almost two hundred years later on canvas. 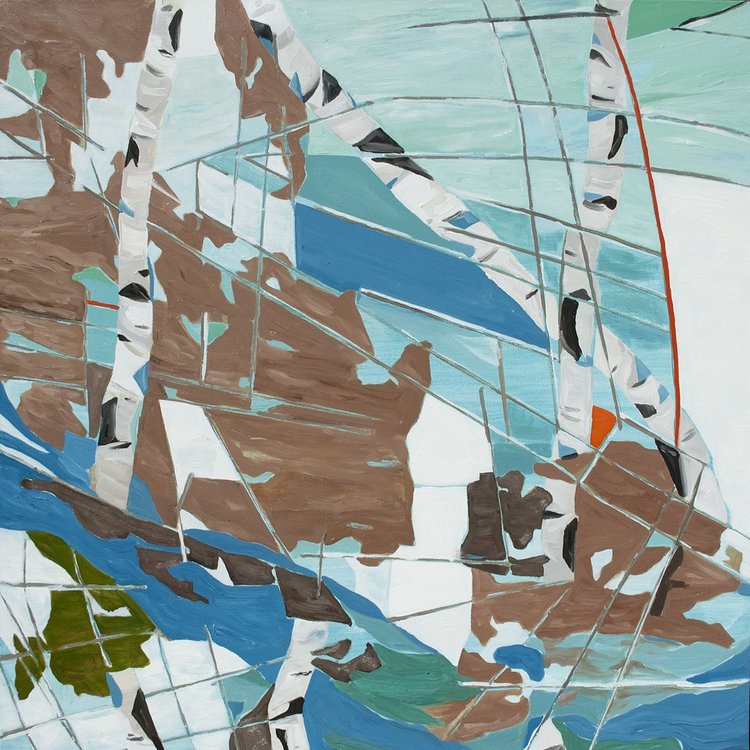 Jena Schmidt, ‘A’ Gallery, Salt Lake City, through Oct. 3, Monday – Saturday, 10 am – 6 pm. The entire exhibit is online at https://www.agalleryonline.com/schmidt-jena.

Tagged as: "A" Gallery, Jena Schmidt