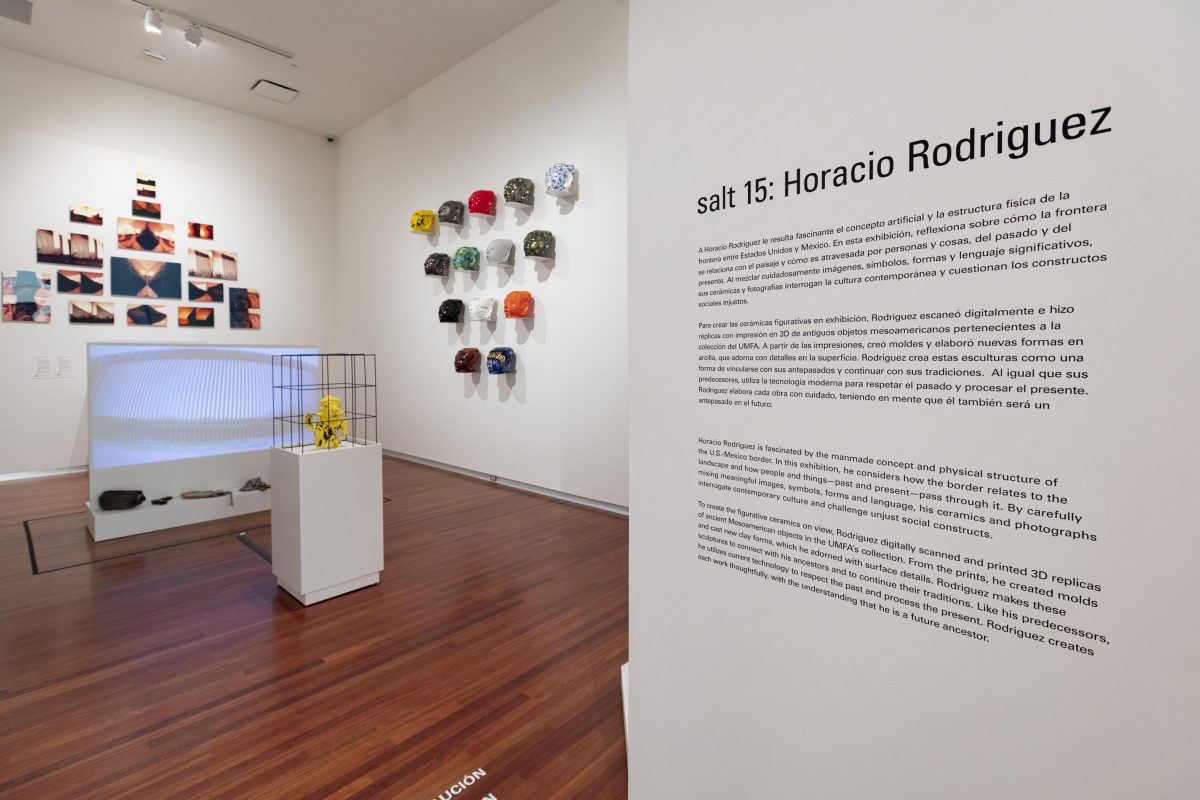 Four rows of colossal ceramic heads line the right wall of the gallery, arranged in an inverted pyramid shape. While each has been crafted from the same model, every head is conferred with a distinctive color or adorned stenciled designs, ranging in patterns and words. The various symbols invite individual attention to an otherwise uniform collection.

Artist Horacio Rodriguez has made waves since moving to Utah in 2016, amassing several gallery and museum exhibitions, including shows at Finch Lane, the Utah Museum of Contemporary Art, and Granary Arts. He moved to Utah as a recipient of the University of Utah’s Morales Fellowship, an arts and teaching grant, after graduating with his Master of Fine Arts from Montana State University. Now, his work is the focus of the Utah Museum of Fine Art’s salt series. The work reappropriates familiar materials to elicit stirring and often uncomfortable associations, which startlingly confront the inhumanity of America’s border policy and treatment of non-Caucasian immigrants. As part of this penchant for reappropriation, Rodriguez is known for his unique sculptural approach — crafting 3-D printed models of pre-Columbian artworks and presenting them in an entirely new light.

Rodriguez modeled the row of heads — entitled “El Camino del Diablo, The Devil’s Highway: The Yuma 14” — after a pre-Columbian artifact from what is now the city of Veracruz Mexico. The individuality of each, as well as their scale, parallels the lives of fourteen migrants who perished in the late spring of 2001, in one of the most significant losses of human life ever chronicled near the U.S.-Mexico border. He envisions the sculpted heads to be an homage to the individuality of the fourteen lives lost, each brimming with their own hopes, dreams, and history. 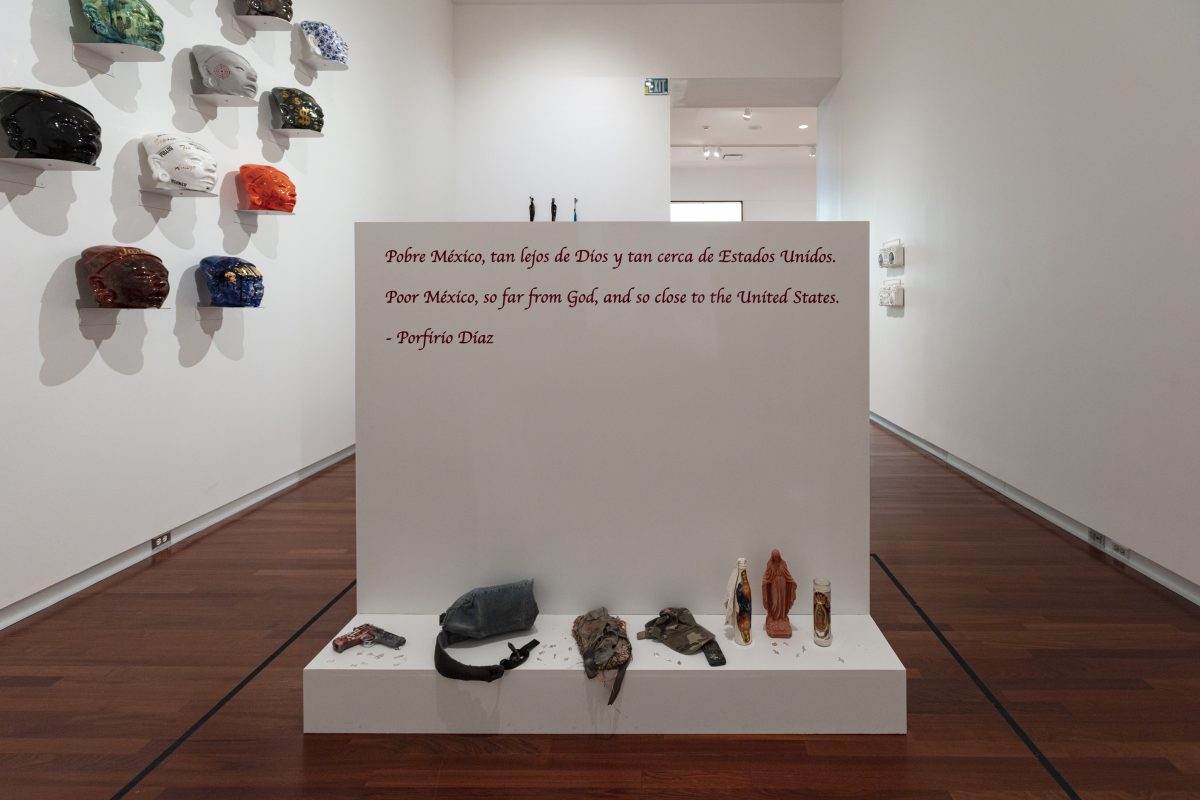 Inspired by this event, and by Luis Alberto Urrea’s 2004 nonfiction book The Devil’s Highway, in the summer of 2021 Rodriguez traveled to Arizona to volunteer with Battalion Search and Rescue, a humanitarian group that searches for lost and missing migrants near the U.S.-Mexico border. This experience was disturbing, to say the least, as it’s not uncommon to find human remains along with debris and discarded provisions. On the trips spent searching for remnants of migrant crossings, he discovered the haunting presence of various items discarded. “I became fascinated with these items because they have stories to tell about the persons who originally had them. They are discarded all over the borderlands,” Rodriguez told me in a recent interview. Rodriguez uses such items in his artistic practice as reminders of the human toll of cross-border migration.

In the gallery’s center, a large, double-sided display platform becomes a focal point. Situated prominently on this platform is a video loop of the seemingly infinite border wall, which Rodriguez shot from his car while driving along a newly constructed section. On either side of the display are items which mimic those abandoned while undergoing a border crossing, including water bottles and pieces of clothing. Small silver milagros (decorative pendants) adorn the display pedestal, recalling a sentimental and almost childlike connotation — humanity in a sea of desert brutality. Rodriguez’s video loop shows the banal and seemingly arbitrary nature of this concrete mass, the mighty appearance of which does not actually deter so-called “illegal” migrations. Indeed, a barrier does nothing to address the pain of economic catastrophe, femicide, and decades of geo-political maneuvering, nor threats to mere survival that catalyze the decision to flee one’s homeland. 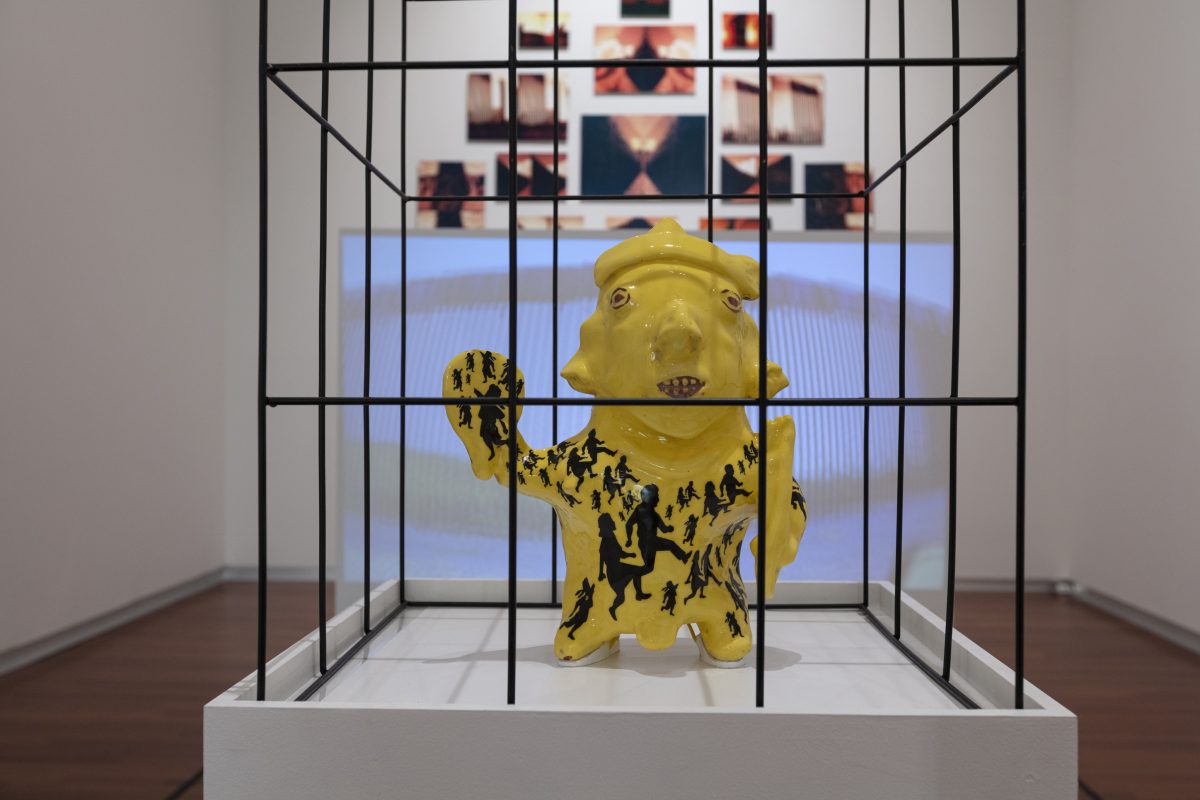 Layers of an exhibition: a caged child in front of a video of the border wall, in front of images from along the border, photo courtesy UMFA

Rodriguez is careful to note the harm of the border wall beyond exclusively human terms. “The National Wildlife Preserve came in to address the concerns that came from putting in this wall. [To construct it], they blew up part of a mountain, which left a ton of debris that is still there,” Rodriguez says. “When Biden was elected, the ‘Trump’ section of the wall was sort of abandoned.” In addition, sections of this barrier flow away in monsoon season and block the flow of animals to their food source. Aside from the ecologically destructive impact, the wall funnels individuals to the most inhospitable sections of the desert, which may result in even more casualties.

Elsewhere in the gallery, a ceramic child figure is placed on a pedestal, surrounded by a cage. The figure is brightly emblazoned in yellow and covered with stenciled silhouettes of figures in flight — reminiscent of the “immigrant crossing” signs that once existed in border towns. The caged child — a motif Rodriguez has adapted before — ignites the painful association of family separation and retributive immigration policy championed under the Trump administration. 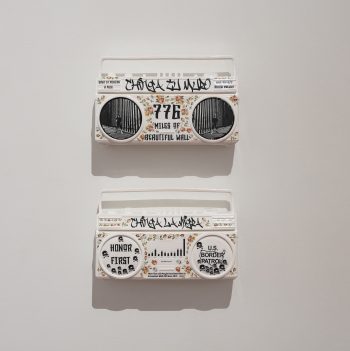 Another piece features two retro boombox radios displayed vertically. The pieces — entitled “Chinga La Migra” (which could be translated as “Fuck the Border Patrol”) — appear in pristine, porcelain-like white, decorated with delicate pink floral decals. The top radio’s spherical speakers feature a lone figure facing the menacing border, while the other radio depicts a graph of border crossing fatalities and stenciled skull and crossbones scattered over an outline of the United States, which reads in block letters: “U.S. BORDER PATROL.” Here, stirring political messages intentionally clash with the fanciful floral motif, just as one of the indigenous heads on the opposite wall depicts a royal blue floral pattern typically seen on elegant dinnerware. To Rodriguez, such juxtapositions speak to the immigrant’s plea for recognition, normalcy, and assimilation. On a visual level, these dichotomies work to invert the colonial power-mapping that’s wrought a chronology of destruction from indigenous peoples to present. “My work directly confronts assimilation … people who are immigrants to this country trying to use these western symbols to fit in,” he says.

In 2018, Rodriguez approached the UMFA about scanning some of the pre-Columbian works in their collection. Expecting a flat rejection, he was pleasantly surprised by their openness to the idea. UMFA Executive Director Gretchen Dietrich and then-Senior Curator Whitney Tassie informed Rodriguez that some artifacts in storage would be carefully unearthed for him to conduct 3D modeling. “Initially when Whitney came to me with a group of pieces in the basement storage, I thought they were giving me undesirable pieces. Actually, the objects they provided were really special and beautiful,” he said. “It was a win-win for both of us.”

The process was the catalyst for a deeper investigation into the origins of these items, mirroring a global push for institutions to adopt ethical provenance research into their collections. In the case of pre-Columbian artifacts, it was at one time customary to take sacred items out of graves without any careful archeological investigation or care before peddling them on the open market. It wasn’t until the 1970s that certain safeguards were instituted, a truth openly acknowledged in the museum’s label associated with two sculptural figures (one woman and one man) dating from 300 BCE to 300 CE: “Until 2021, UMFA records were only able to trace these objects back to the date they entered the collection, 1980. However, curatorial research, instigated by artist Horacio Rodriguez’s creative process, recently revealed ownership history back to 1959 …” Rodriguez has conducted a DNA test, which tied his ancestry to Nayarit, the region on the Pacific coast of Mexico where these sculptures came from. 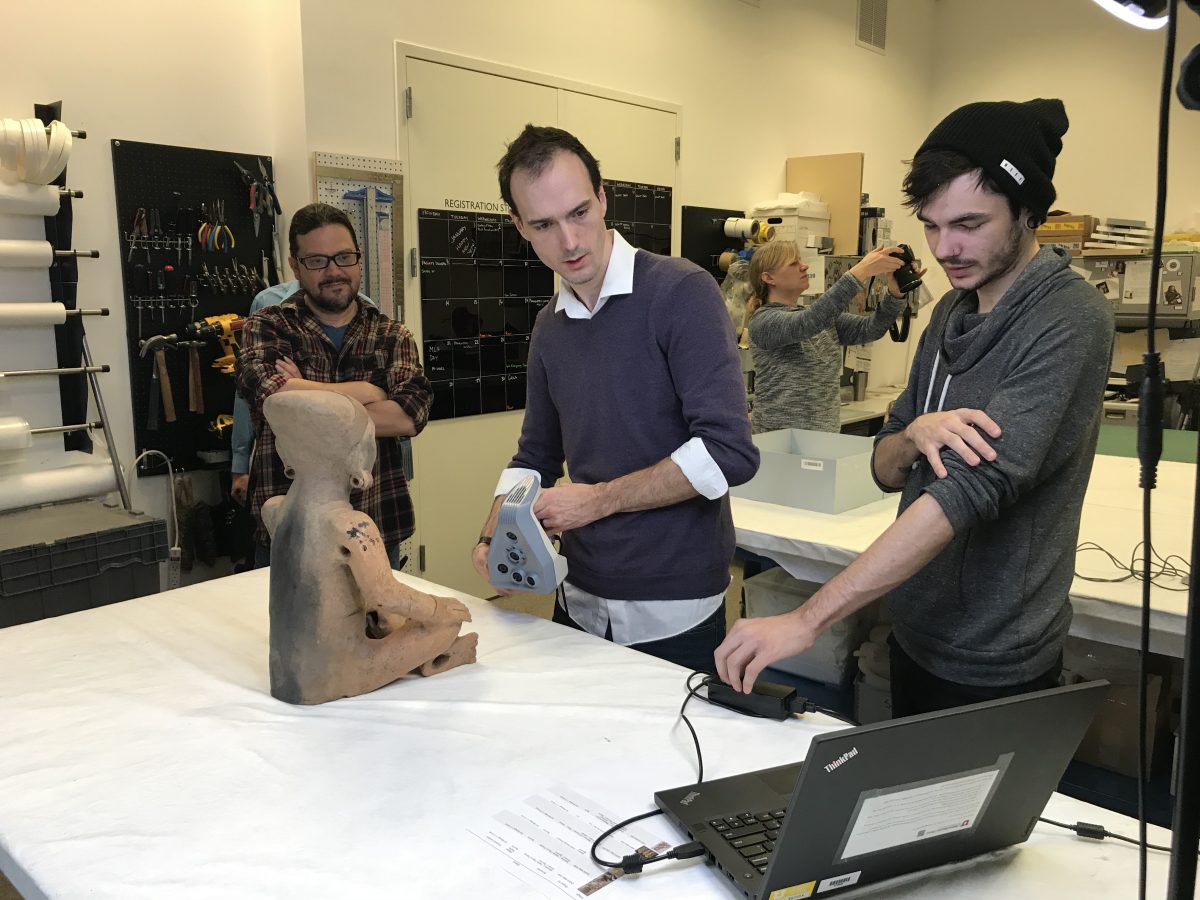 In the collections storage area of the UMFA, artist Horacio Rodriguez (left) and T. J. Ferrill (center), head of Creative Spaces at J. Willard Marriott Library at the University of Utah, work with UMFA staff to carefully 3D-scan Mesoamerican objects in the collection.

Above the Nayarit figures is a pyramid-shaped collage of images depicting the border wall. Taken with a Holga camera — what the artist describes as a cheap, plastic, toy camera from the 1970s — myriad views of the wall are arranged salon style. In this light, we may contemplate the abstract forms underlying the structure, to fully respect the capricious marker that so stirringly symbolizes a divide between two nations. After all, a border is a mere construction of angular concrete, just as much as a boundary is a mental construct that allows us to distance and often dehumanize those whose existence may lie mere miles away from our own.

Epitomizing this idea are the words posted on the floor of the gallery’s entrance — “you are entering a border zone, please proceed with caution.” Such spatial labeling forces a reckoning of how deeply constructed our realities can be, a prescient reminder for a state with an incrementally expanding population of diverse residents. “This show is about me bringing the experience of the borderlands to Salt Lake City. I know Utah is really conservative, but I’ve always had a really good response to my work here. Utah has been very good to me,” Rodriguez says.