Home lost and found again in art: Cheryl Sandoval and Steps from the Reservation at Mestizo 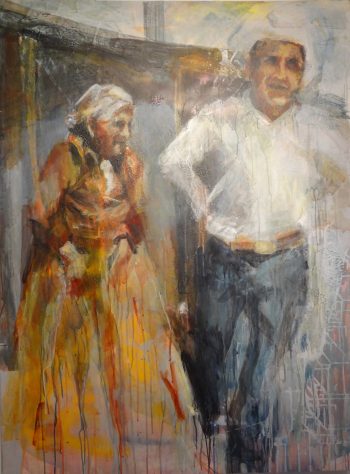 Among my favorite qualities in art, two perennial activities stand out. One is drawing, an essential human activity that too often goes entirely under-appreciated, thought of as nothing more than the practiced trick of outlining visible forms. The fact that computers, with their mind-boggling computational powers, cannot recognize objects, let alone draw their outlines, should reveal some more accurate truths about this unique human ability. (That my cat recognizes her food entirely by smell, after being brought to nose distance by the sounds of preparation, argues that her impressively acute vision must operate on very different principles from mine.) But drawing, especially as practiced by someone like Jicarilla Apache-and-Navajo artist Cheryl Sandoval, who was born in Dulce, New Mexico, and separated from her family and reservation society when she left home to pursue an education, does so much more than limn a likeness. Her uniquely personal use of drawing brings me to my second enthusiasm: in drawing, the eye, mind, and hand take on power to transform what was merely detectable into something that can be felt and understood. How a particular artist forms the visible into the understandable and moving is akin to how we use language to create a far richer and more transparent parallel universe than the one we merely live in.

At first glance, Sandoval’s created world resembles the photographs she recounts painting from, modified in ways familiar from the works of many of today’s academically-trained artists, and very different from the Photo-Realism of the 1970s. Mary Sinner provides a recent comparison for 15 Bytes readers. Yet as Sandoval’s motives for working from photos are different from other artists’, so is her strategy. Where a member of most American subcultures can expect to find many ways of replacing lost or missing cultural references—books, movies, periodicals, and widely-shared personal accounts are all readily accessible sources for accounts ranging from immigrant tales, through growing up on the farm, to life on today’s big-city streets—someone raised on a reservation or in any one of hundreds of smaller-language groups has far fewer such resources. For Sandoval, then, photos comprise an invaluable means of access to her own past, her family’s life, and the essential content of her wider culture, while the process of painting from those photos leads her not only to look at them more closely, but to reflect on their meaning, questioning both those images and her own, very personal notions of collective values and ideals. 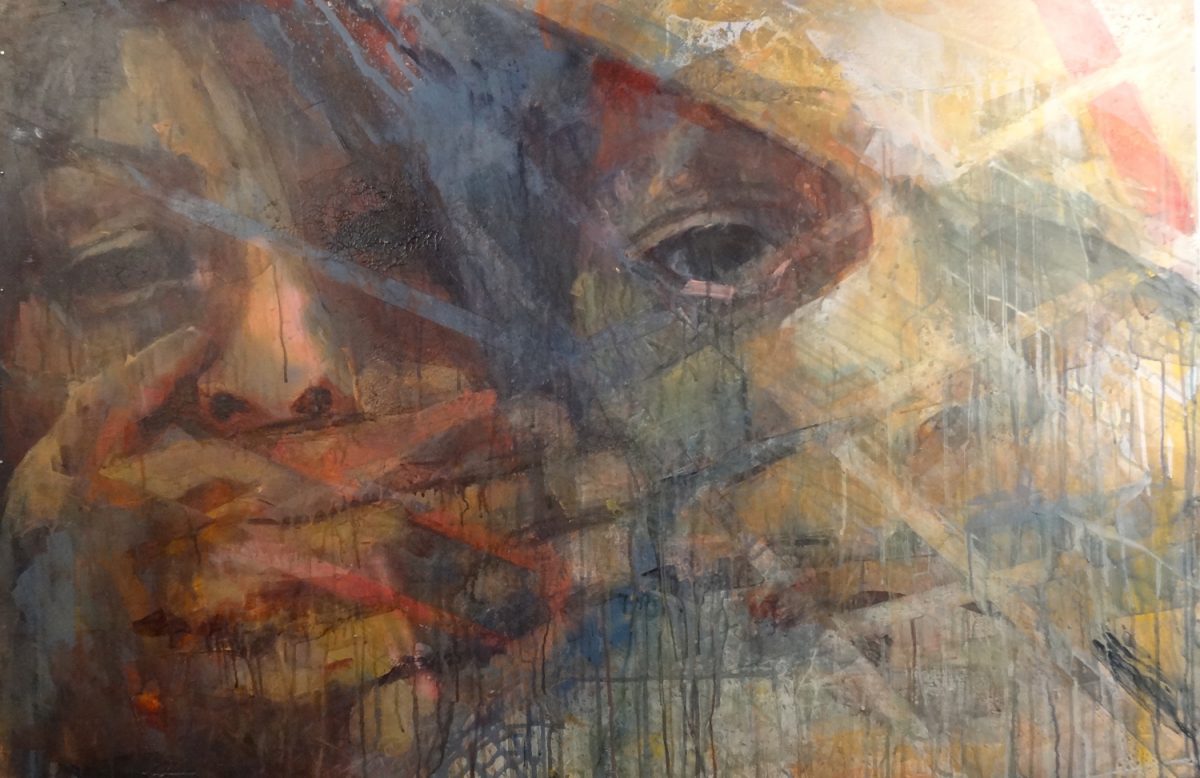 Results of this questioning are visible in her art, both systemically and specifically. Her color scheme owes less to the chemists at Kodak than to her memory of bright sun and high desert foliage: colors that should be familiar to Utah art audiences. A device she particularly seems to employ exploits visual artifacts from the age of film, when sprocket slippage could blur images by repeating them fragmentally. In the canvas “Parallels,” which appears to single out a figure also seen in the panel “Grandpa Julian Visits Home,” horizontal lines of light repeat vertically like multiple reflections or film frames, but the result feels more like bars separating a witness from the subject. Comparing the two contrasting representations of the woman, that on the panel seems to present her in a secondary role, as the object of the title character’s visit, while on the canvas she appears monumental, a study as much of an important social role as a particular individual.

In several other panels, the slippage is horizontal, allowing other comparisons to be made within a single canvas. This works particularly well in “Stepping Away from Home,” in which three repeated images of a young man cross the canvas from left to right, using the convention from writing to imply the simultaneous accumulations of physical distance and time, signifying cerebral and emotional distance and personal change. It’s a very complex idea, the complexity reflected here (and elsewhere throughout Steps from the Reservation) in myriad painterly passages. In the similarly subdivided “Speak No Evil, See No Evil,” Sandoval employs an ambiguity, leaving the viewer to decide whether the two side-by-side images represent two of the traditional three faces of the familiar homily, or it they repeat the same visage, implying a logical connection between the two prohibitions: speaking evil can exacerbate seeing evil. 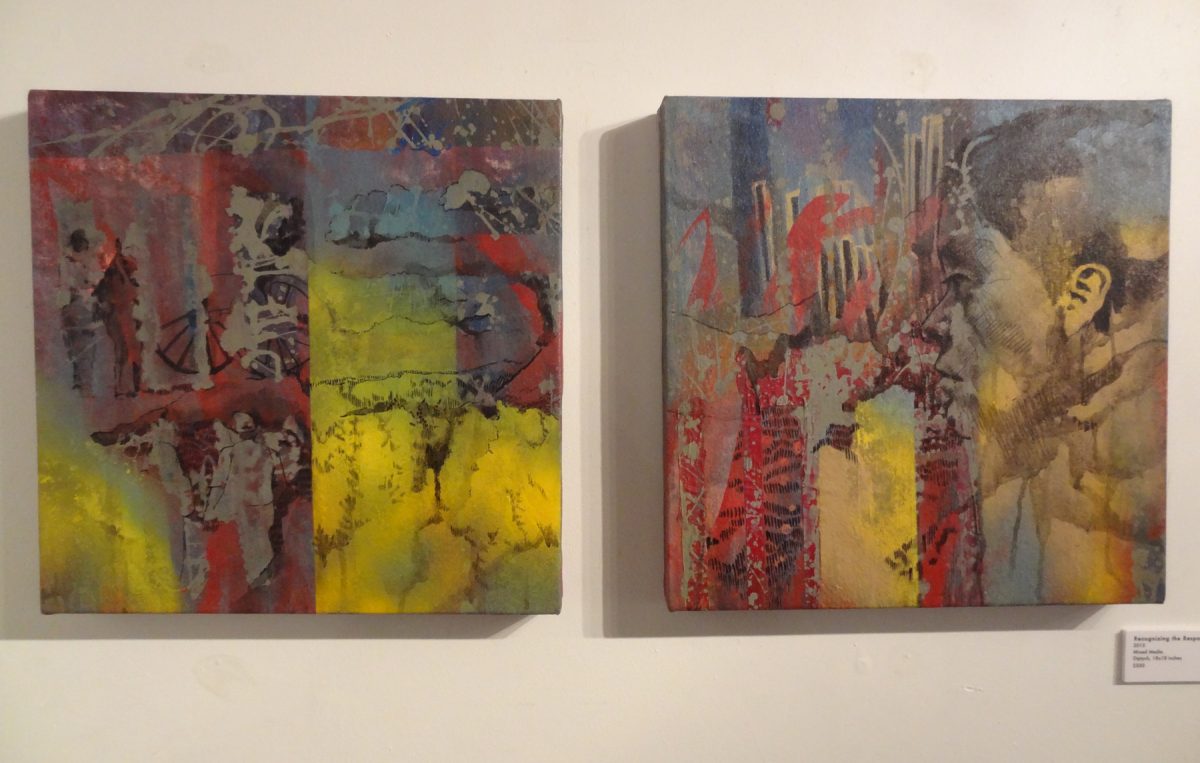 These are the easiest instances to spot of how Sandoval expands her painter’s vocabulary. The two figures who share the frame of “Grandmother Knows Best” offer a paradoxical, but more subtle example. While the Grandmother holds the Child (who may represent the artist) in her arms, the way the background spills in between them like a veil and the difference in their color modeling suggests that more than one barrier may divide generations. More extreme instances show up in “Breaking Down Perceptions” and “Further Removed,” where the mechanism of abstraction serves to render graphically just how impalpably subtle cultural values really are. Anyone who’s ever rued not paying more attention to early influences and personal history once so easily accessible through older generations, but which were inadequately valued and eventually lost over time, may be able to sympathize with these frustrating representations of what feels so close, yet remains just beyond reach.

Until only a few years ago, a career in art still didn’t require a college degree or a resumé. Now the situation has changed, and not always for the best. Many BFA and MFA graduates emerge from school having learned to speak an art school patois that makes unintelligible nonsense of what they say about their art. All the more reason to appreciate how Sandoval, a BFA candidate at the U of U, not only demonstrates a sophisticated, multilevel technique of representation, but also the ability to explicate it coherently. For instance, she explains her use of light, transparent paint application alternating with heavy, opaque treatment as a way of representing experiences like loss and confusion. In a landscape, light layers may convey the powerful sunlight of her reservation home in the desert Southwest, while in a portrait or a figure, the same insubstantial application might elicit the sense of urgency felt while contemplating the passage of time and slipping away of the past. Then again, heavy paint can suggest the barriers to perception and connection, or the felt importance of mentors and loved ones threatened by change. Art always has been the most conservative of human activities: an attempt to preserve what would otherwise be lost in the spaces between one person and another. In Cheryl Sandoval, that dramatic and essential purpose comes alive more directly than her audience may be comfortable recognizing.

Tagged as: Cheryl Sandoval, Mestizo Institute of Culture and Arts