Creating Form Through the Use of Positive and Negative Space 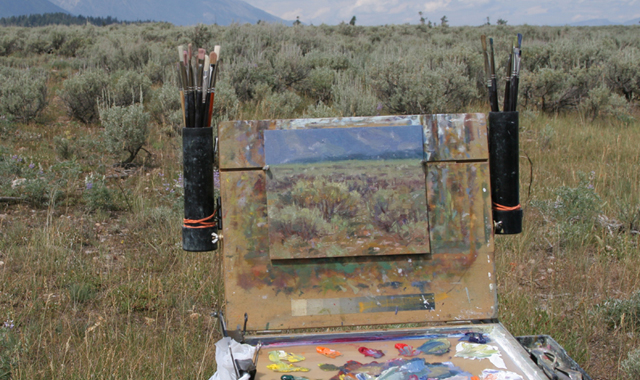 When contemplating representative painting methods, it’s important to understand the role of positive and negative shapes in creating form. Understanding the use and application of these two powerful elements in the design process is fundamental when it comes to creating understandable and effective works of art. First of all, it’s important to remember that we artists are not painting reality in the sense of real tangible objects and the air around them, but the illusion of such. This illusion can be highly developed in the spirit of trompe l’oeil or thoroughly impressionistic depending on the temperament and viewpoint of the artist. No matter the style though, creating form is dependent on depicting effective relationships between objects and the spaces around them. How is it done?

When teaching my painting classes I have seen a number of otherwise good paintings that don’t reach the level of expectation of the artist due to a lack of understanding of how form is produced. Believe me, I spent many an agonizing hour in my early painting days wondering why some of my paintings looked more like cartoon backdrops than the way I envisioned them in my mind. The missing element was, more often than not, a proper understanding and application of negative shapes and edge control. You see, since we are creating the illusion of space on a two dimensional surface, we have to interpret the way one form interacts with the form next to it. The adjacent form could be another object in space or simply the sky behind a tree or mountain. For this reason I often try to get my students to do a study of one object only, as a way to simplify the process. This way they get a better understanding of the procedure before moving on to more complicated subjects. Starting out with larger, more complicated paintings in the beginning will often overwhelm the student with too many problems to solve. This also creates a situation for the instructor where there are so many things wrong with the painting that it is often impossible to say something positive. When that happens the student is often discouraged and some give up in frustration. I remember a gentleman a few years ago who told me he was giving up painting after only three times in my class because, as he said, “I’m just not getting it.” Try as I might, I could not convince him to lighten up on his expectations!

To use an example from the landscape, since that is what I write about frequently, imagine a small bush in an open field of grass. The three most important tools in depicting this subject are shape, value and edge control. Forget about color and brushwork for a minute because that is all icing on the cake (this is easy to understand when you consider that color and brushwork would be absent in a competent pencil drawing of this same subject). Most students start out by looking at the positive shape of the bush and proceed to apply it to the canvas as a sort of stick-on item, which lacks the feeling of an object that has atmosphere around it. Shape, size, and placement on the canvas are matters of correct drawing. Next, the bush must be the right value or values in relation to the surrounding area. Finally it needs to have a believable relationship to its background with respect to its edge quality. How the edges of the positive form of the subject appear next to the adjacent form make all the difference.

To do this, study the form of the bush all the way around its contour and notice if the edge gets sharp in some spots. Does the contour get lost in other places? Does it have a broken edge somewhere else? Are parts of this external edge blurred and others there, but not sharp? The latter is known as a found edge. After studying the external edge of the bush what about the internal edges? Painting is all about forms within forms. How do these forms interact with the internal surface of the bush itself?

Remember too, that manipulating the positive shape of the bush is not your only option. Since we are working on two dimensions here, why not manipulate the negative shapes around the bush as well, to get the desired effect. Remember, this negative space has to be “right” with respect to placement, size, shape, value and edge. It’s how these positive and negative forces merge that creates the illusion of atmosphere, which is so important in our work.

Add to this mix all the possibilities that happen when you include color and interesting brushwork, and you can create something very special. The important thing is to let your eye be the guide, reliance upon painterly conventions and canned methods can never compete with the power of a trained eye.

I hope this helps some of you out there, which brings something to mind… I have been writing this column for several years now and often wonder how many people I am reaching? Like anyone who writes for publications of this type, I usually get only a handful of responses or feedback. I would be interested in hearing from you to know how you are being helped by my Hints ‘n’ Tips column. You are welcome to contact me with comments or requests for future articles at my e mail address: johnhughesstudio@yahoo.com.

Thanks, and here’s to a new year of much progress in all of our work. John