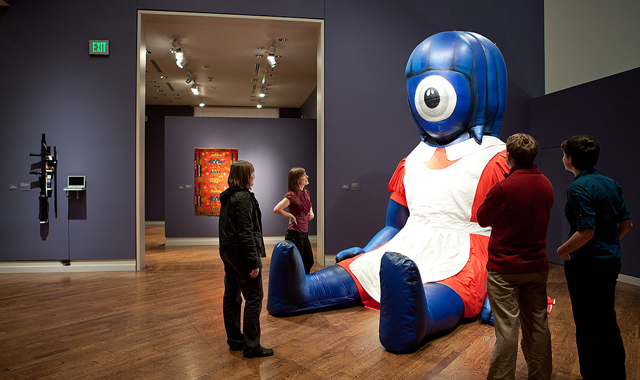 The first thing you notice when driving up to Brigham Young University’s Museum of Art is the long neck of the Loch Ness Monster emerging from within the flower bed. In fact, seeing such an apparition made me laugh, out loud, with both delight and excitement, giddy as I was to see curator Jeff Lambson’s much anticipated We Could be Heroes: The Mythology of Monsters and Heroes in Contemporary Art, which runs through April 6th. Giddy because BYU consistently brings a professional caliber to their exhibitions in ways that very few institutions in Utah are able to do. We Could Be Heroes is no exception. In the breadth, research and excellent educational resources, it rivals exhibits at some of our nation’s finest institutions. 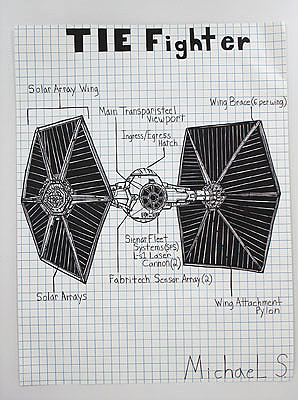 The title boldly declares: We Could Be Heroes. But what is a hero and what are the monsters they face? And, perhaps more importantly, why is this seemingly playful and childish topic relevant beyond comic books and action figures? Well, in fact, our society, and many others before it, has a long obsession with heroic myths: think of the Greek Hercules, the Sumerian Gilgamesh, England’s King Arthur, and George Lucas’s Luke Skywalker, to name a few.

Carl Jung and Joseph Campbell both believed that every culture, in every place and time, will compulsively rehash certain myths and symbols. Among those continually reprised throughout the ages is the ‘hero’s journey. Like Jung and Campbell, Ben Saunders, professor of literature at Oregon State, explores the mythology of heroes. His words, in fact, begin the exhibition: “the dream of the superhero is not just a dream of flying, not just a dream about men and women who wield the power of the gods. It’s also a dream about men and women who never give up the struggle to be good.”

But rather than just celebrate these figures without critique, the exhibition explores, as Lambson explains, “the complexity of the myth of the hero, the hero’s relationship to the monster, [and] how a monster or hero is defined by perception.” This is done through four central themes: Heroes, Monsters, Violence and Mythology. The exhibition is staged in such a way that you can turn left and face the monsters first or turn right and navigate through heroic figures. Guided by Lambson, I turned right. 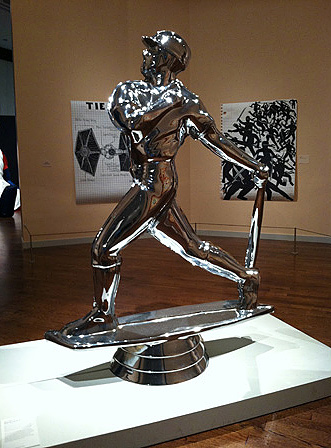 Yet it is Ben Turnbell’s sculpture, “Bring Me the Head of Saddam Hussein, ,” that is the most bold. The larger-than-life Captain America action figure, covered in a shiny blue plastic spandex, bulging with steroid-induced muscles and a frozen smile, holds the head of a cartoonish Saddam Hussein. In an attempt to mitigate the politically loaded nature of the sculpture, Lambson missteps by using the interpretive labels to discuss biblical references to John the Baptist and art historical similarities to Caravaggio while failing to truly grapple with the gruesomeness and conflictedness of the sculpture. What seems to be at stake in the sculpture is not its dialogue with Gardener’s Art Through the Ages, but rather, its uncomfortable ambiguity. Is the artist doing this ironically or sincerely? The lack of clarity is unsettling. What are the political implications?

Because, of course, Captain America has a political heritage, as Lambson points out. In a 1941 comic, he punched out Hitler. But what he is doing here is significantly more violent than punching someone out, holding in his outstretched arm the decapitated head of a violent dictator. Certainly, I’m not trying to arouse sympathy for Hussein, but rather to nuance the positioning of this plastic Captain America action figure. 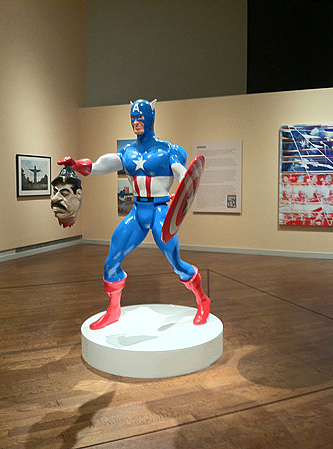 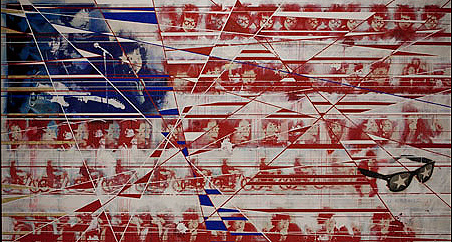 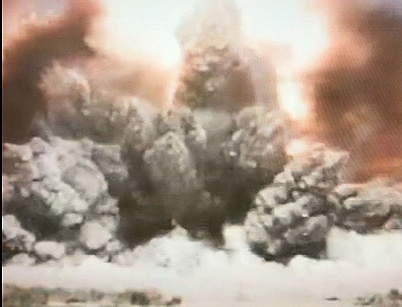 To his credit, Lambson does later nuance the contemporary hero by stating, “We can read about innocent civilian casualties of war or politician’s infidelities. Today many of our knights are ‘dark,’ a more complex reflection of our growing awareness of ourselves and our shrinking planet.”

This nuancing of our hero’s journey ending in an absolutely happy ending is made complicated in the exhibit’s “Mythology” section. Dina Goldstein’s “Snowy” makes humorous the absurdity and pervasiveness of the Disney princess who is almost always magically whisked away with her love, on a cloud of pure bliss, happily ever after. In Goldstein’s photograph, a tired and annoyed Snow White stares at the camera in frustration, surrounded as she is by diapered crying “dwarfs” as her less-than-polished Prince Charming slouches and watches TV. Reality and maternal jouissance is, of course, more nuanced than mythology.

By contrast, the heroism of the strong, Madonna-like mother dressed in Superman garb and holding her son that we find in Polish artist Elizabetha Jablonska’s photograph, “House Games (Washing, Cooking, Laundry),” is obvious. The MOA’s use of the image as the exhibition’s frontispiece is a strategic move as it helps to mitigate a subject matter otherwise dominated by hyper masculinity, overtly sexualized heroines and male comic book artists.

As for the Monsters, they are wonderfully horrible, uncanny and haunting. Cameron Gainer’s “Big Foot” sculpture is positioned in such a way that it caught me off guard, suddenly looming over my shoulder, coming at me in full stride. Jeff Larsen’s performance and reappropriation of the Utah Mormon primary song “Once there was a Snowman” is eerie and uncanny: this dowdy monster is lonely and hauntingly confused, not evil, and certainly not villainous or even threatening. 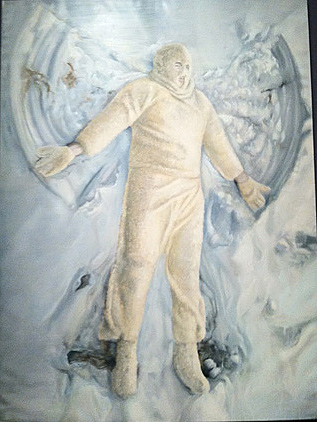 “Sometimes monsters are just misunderstood,” says Lambson. “Centered upon our insecurities, monsters often embody the ‘other.’ As personified points of unfamiliarity, a thing can become monstrous to us when it fails to fall within the bounds of traditional human rationality.” Irrationality is exactly what is scary about the snowman. It’s not your typical angry Yeti, but in its eeriness, it remains threatening.

What we call and see as monstrous and evil depends, of course, on our perspective. 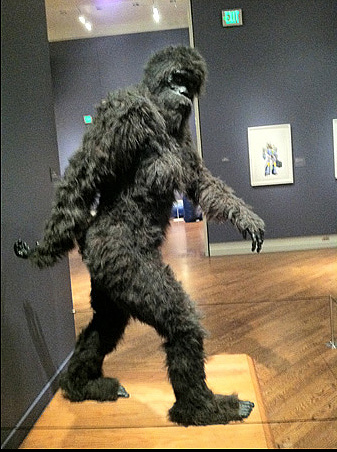 Violence is what unites heroes and monsters. In Annie Poon’s installation and video, “Die Wicked Die!,” the viewer encounters a crudely drawn cartoon of some of the most violent sections of the Bible and Book of Mormon: David cutting off the head of Goliath, Ammon chopping off the arms of the Lamanites, and Nephi’s beheading of Laban. The style and accoutrements in the room bespeak the 1980s: a wooden-paneled TV with VCR, videocassettes, old looking board games, the wood-trimmed country blue couch with paisley patterns, and haphazardly placed boots and laundry. It’s a clear reference to the lived childhood experience of the middle-class Generation X American. Lambson and I are part of this moment in time, where we grew up witnessing the transition from analog to digital technology.

Lambson seems to be hitting his curatorial stylistic stride with We Could be Heroes. Over the past five years Lambson has consistently made efforts to address, recontextualize and historicize artists and themes that emerge out of a 1980s technological paradigm. Think: Michael Whiting 8-bit sculptures, Mirror, Mirror’s exploration of the video game identity and facebook profile identities, and even –though to a lesser extent — Lambson’s exhibition Matter of Words, which attested to the transition from books to Kindle. This penchant for 1980s nostalgia isn’t only Lambson’s, but can be seen as a common theme emerging in contemporary art dialogue, especially for young contemporary artists like BYU’s Daniel Everett, who showed recently at the UMFA, and Dutch artist Constant Dullaart, who showed at UMOCA last year.

As for We Could Be Heroes, it reflects long afternoons dedicated to Atari video games, superhero action figures & comic books on Lambson’s part. But from that childhood origin comes a rich and intelligent language that grapples with our tech- driven and entrenched society. Further, mythologies of heroes and monsters, and the dichotomies these myths create, seem especially current when placed in the context of a post 9/11 psyche where dramatic and sudden monstrous attacks on civic life have come to make up the lived experience of the 21st century. Like so many before us, the hopes in our heroes and the fears of our monsters continue to persist and questions remain. What is our personal hero’s journey? How do we battle our monsters? Can we be Heroes? 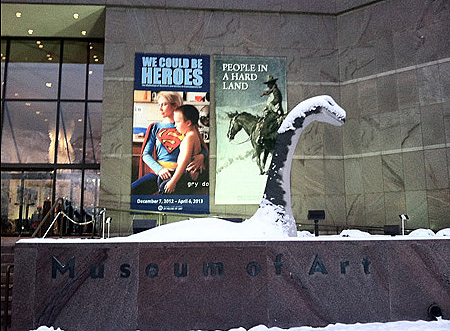 We Could Be Heroes: The Mythology of Monsters and Heroes in Contemporary Art is at the BYU Museum of Art through April 6.