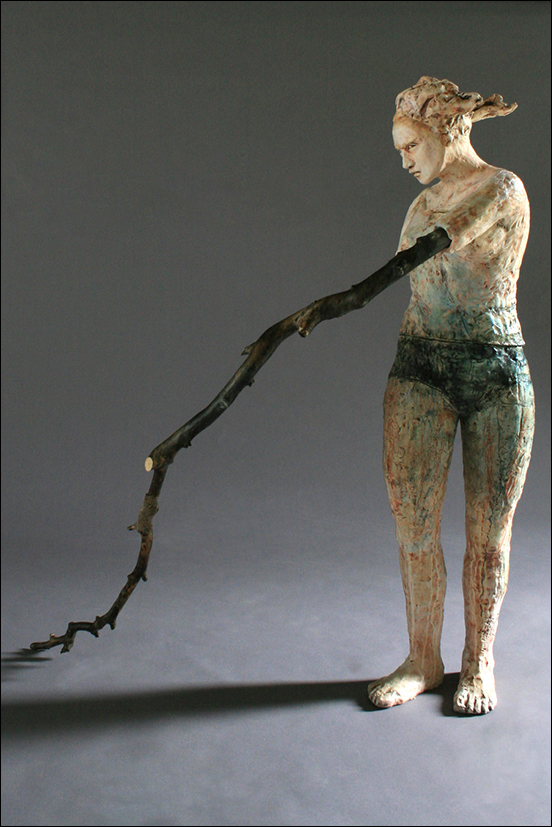 A Time to Kill and a Time to Heal by Heidi Moller Somsen, 3 X 44 x 15 | Mixed Media, Image courtesy of the artist.

The often stated aphorism, “That which does not kill us makes us stronger,” may buoy one in rough times but can leave a person wondering how to navigate from emotional or physical turmoil back to a place of strength. That sort of emotional and physical tension is evident in Heidi Moller Somsen’s latest show, currently on display at Phillips Gallery. As she explains, when discussing the genesis of the work, “I was thinking a lot about people in times of extreme emotional stress.”

Through her mixed media sculpture, Somsen explores the response to heightened emotional states, which varies depending on the individual. “I’m interested in this fight, flight, or freeze instinct we have and anxiety and what that does to us,” Somsen says. In the case of “A Time to Kill and a Time to Heal,” the female figure is poised as if responding to a threat and preparing to do battle. “The way she’s twisted, it’s a sense of harnessed energy, getting ready for movement,” Somsen says. The woman wears an expression of ferocious determination, as if whatever fight she is entering, she will win. “I was thinking of this mother figure who was ready to defend her young at all costs. You’re willing to give everything, including your life, for your children,” Somsen says, who is a mother of three.

The sense of movement in Somsen’s pieces is made all the more intriguing because as part of the process in creating this body of work, she executed two performance pieces in 2011 at Nox Contemporary in which she became her sculptures. Somsen attached long pieces of driftwood to her arms, similar to the arms of her sculptures. “When I reached them up in to the air I felt that height, that extension and it was powerful,” Somsen says. This type of “study” helps her to understand her figures, and their intentions.

The wooden limbs are inspired by limb autonomy, a process that allows certain reptiles or invertebrates to escape or survive by choosing to part with a limb. Lizards and salamanders can do it with a piece of their tails. Spiders can choose to lose a leg. Their flight response saves their lives. Somsen took this notion of limb autonomy and applied it to her figures. Many have lost a limb through trauma, and some have chosen or not chosen to adopt a limb from nature. These wooden limbs, made from salvaged wood and tree roots, are grafts. “In horticulture, you try to make a hybrid or maybe bring new life to an old tree by grafting in a younger branch,” Somsen says. These grafts could be interpreted as a choice the figure made to have attached as a method to heal.

The materials she uses, such as the wood, are deliberate choices by Somsen. “I’m also very interested in using different mediums together and how they interact and the conversation of different materials,” she says. One of those conversations is about struggle and moments of reprieve from struggle. In “The Salve and the Scion” a woman is in turmoil, but the title of the piece and the materials she’s made from imply an impending moment of calm amidst the storm. A salve is an ointment used to treat wounds, and the figure is covered in beeswax – a soothing balm. The scion is her wooden limb, one that she may have attached after separating from her arm in order to save her life.

While the fight or flight response was once critical to our survival, today it manifests itself in other ways. “This is an emotional state that in primitive cultures served an important purpose. But now we live in this culture where we’re not threatened in that sense, but we have other things that we respond to in the same way,” Somsen says.

While the threat has changed individuals still feel a strong emotional response to actual or perceived threats, and the response can make one hyper-aware of the importance of survival, the survival of self or the survival of offspring. Primitive instincts surface, a battle is fought, then healing begins — this cycle repeats itself throughout a person’s lifetime. The experience is universal and perhaps that is why Somsen’s figures resonate with one’s intellect, but also with a deeper more primeval part of the mind that recognizes the struggle depicted in Somsen’s work.

Heidi Moller Somsen’s exhibit of ceramic and found art sculptures will be at Salt Lake’s Phillips Gallery through April 12. The gallery is located at 444 E. 200 S. and they are open Tuesday – Friday 11am to 6pm and Saturday 11am to 4pm. 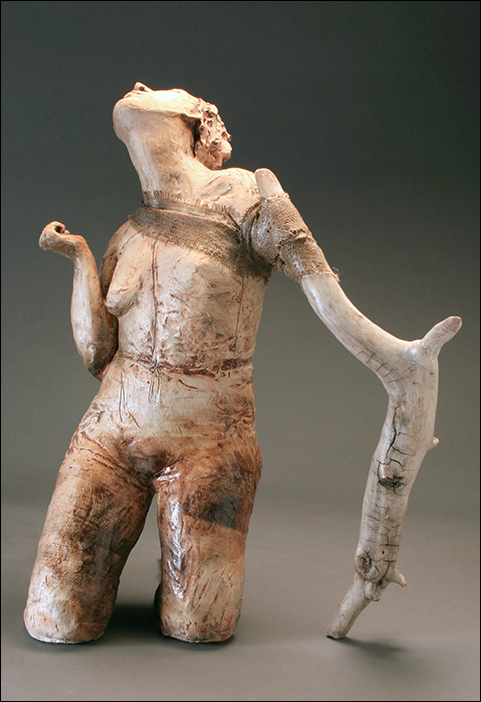 The Salve and The Scion by Heidi Moller Somsen, 35 x 28 x 20 | Mixed Media, Image courtesy of the artist