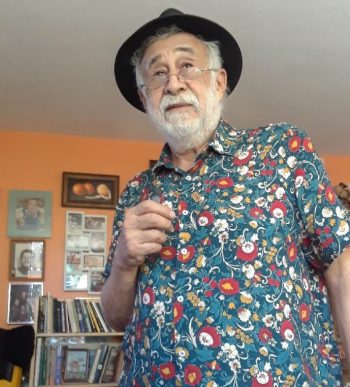 READ LOCAL First represents Utah’s most comprehensive collection of celebrated and promising writers of fiction, poetry, literary nonfiction, and memoir. This month we bring you Hector Ahumada, a Chilean poet and naturalized citizen who has lived in Salt Lake City for nearly forty years. “Poetry belongs to all genders,” says Hector, a participant in the reading series staged by City Arts.

The six poems below come from the chapbook, poems by Hector, published by the Wanting to Die Poetry Club, to which 15 Bytes express gratitude for this re-publication of Hector’s work. The poem, “To My Trip Companion Khalil,” originally appeared in The Highland Travelers, Elik Press.

Once upon a time, there was a poet

who wanted to know.

The answer to the old question

of what is the relation of politic to philosophy.

But his granddaughter pursued him

to question something else by saying:

“Abuelo-grandpa, the meaning of my existence is to love my father and mother,

and the purpose of my life is to eat

And you “abuelo” are my chocolate provider.

The relationship of philosophy and politics,

is to render the truth of politics

with the truth of artistic creations.

Can you repeat that please,

but allow me to finish my energy drink first?

This is not Poetry; this is an indoctrination into a new way of thinking.

I have to warn you that I have a PhD

That I read all the latest USA Laureate poets, including Felipe Herrera.

Once upon a time, it was not true

that any opinion is worth

as much as any other opinion.

That Plato discussed with young people

how to distinguish between correct

Once upon a time,

democracy was in trouble in USA.

And the absolute truth was in silence

was their unpaid educational loans.

And cash compensation was available

to the persons exposed to Anti-poetry.

Let’s assume that the man is asleep in delusion,

Consumed by his thoughts and desires,

the man does not want to wake up.

His false pride imprisons his soul.

The man earns his living, eats one or two times a day

and amuses himself with his cell phone.

The meaning of his existence is to google

and the purpose of his life is to delete.

He remains in deep passion with his material world.

He forgot the old purpose of his life,

and the symbolic dimension of his social existence.

The economic activities of his life,

has produced enormous amount of wealth.

but, it is something too hard to believe.

He knows that he is not the judge of mankind.

He believe that his radical protestant skepticism

will absolve him in this life or in a life to come.

The man is disinterested in the rest of humanity. 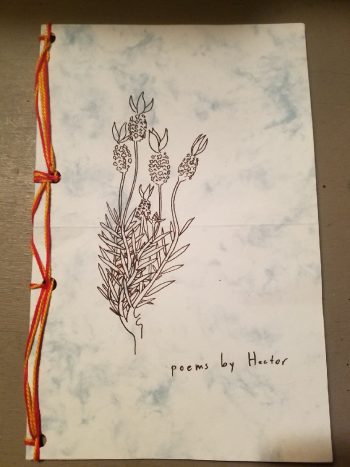 The music of violins and cellos.

The aroma of coffee and cheesecake.

The moral and ethic of my parents.

The photographer, his wife

and the editor of a local newspaper.

The young woman with a nose ring.

The decay of democracy.

The material abundance of capitalism.

The yoga, meditation and therapies.

The six hundred and thirteen

commandments of the Jews.

The ten evil things of the Buddhists.

The breasts of a woman

under a green blouse.

The painful gifts of Nature.

The indifference and rejection of old people.

The emails, texts and phone calls

The language, the thoughts and words.

The images, symbols and meaning.

The empty chairs and leftovers on tables.

The music of a piano, the poem.

Her name was Sara.

She was thirteen year old.

A missile exploded in her room.

What traditional pattern should I use to write this poem?

What poetic expressions should I use

to give coherence and continuity to this event?

The girl’s dead body was trapped

under cement and brick fragments.

While her home was consumed by the fire.

The poets of the modern world had sung against:

Their authentic and sincere voices have not ignored:

The body of the girl was just a mass of burned flesh and bones.

Perhaps is the time to create new poetic expressions

to denounce the ideologies of the creators of wars.

Her name was Sara, she was thirteen year old,

and I found no Poetry for her.

To My Trip Companion Khalil

Although father and son,

we are so different.

At the core of our souls

he is one, and I the other one.

We speak the same languages.

I have no ambitions,

but the intense desire to write.

He seldom reads my poems.

He is my beloved one.

We do not pray together.

We sit on the opposite

ends of the garden.

In an every day acceptance

with tolerance in time,

we perceive the same differently

We are united by love.

Song to my Robotic Lover

Let me touch your nipples,

while you talk to me about:

Let me blow my warm breath

over your pubic hair,

while you read me about:

and the obscure academic jargon.

Pour me another glass

Use silence to manipulate

my dogmatic expression of discontent.

than the softness of your thighs

and your academic accomplishments.

Perhaps, one day you will understand

that, I am not the one who you think

And you are not the one who I think

I came from water, I am and I am not,

and I am going to dust and worms.

Let me penetrate you,

while you whisper into my left ear:

While you reveal to me

the meta-language of the intellectuals

and I stop feeling this sick compulsion

to justify my thinking.

Imperialism and its effects

on the rest of this planet.

The idea that that USA, England,

can enjoy the wealth of this earth

with greed, hate and delusion

is presented in academic realms

as The Will of some Unknown Entity.

brings me the bill.

I see fields of yellow, white and red tulips,

wind-mills, a trail and boats in a sea channel.

A battalion of German soldiers

marching under a cloudy Autumn sky.

Fragment of a Postmodern Ecclesiastes – Anti-poem

There is a time for almost everything.

A time to laugh, a time to cry.

A time for beef, a time for lamb.

A time to make mistakes, a time to apologize.

A time to believe, a time to disbelieve.

A time to look, a time to close the eyes.

A time to eat, a time to lose weight.

A time to accept, a time to criticize.

A time to sleep, a time to be awake.

A time to love, a time to hate.

A time to resent, a time to forgive.

A time to recognize your ignorance, a time to ask for help.

A time to tell the truth, a time to keep your mouth shut.

A time to understand life, a time to run around like a chicken with no

There is a time and a place for almost everything.

Please do not make me repeat the anti-poem again.

For more by Hector, visit: http://www.poethector.com.