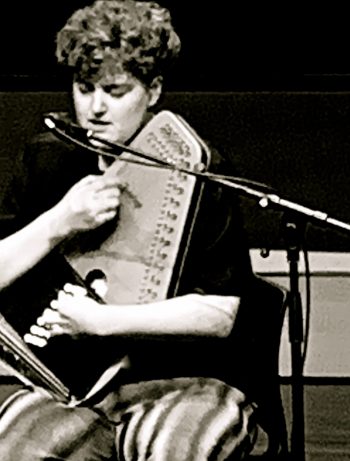 Ysa Pitman performs on her autoharp

In Salt Lake City, one of the most pleasingly brave and authentic events I have the pleasure of attending is 12 Minutes Max, staged by Paul Reynolds and Salt Lake City Public Library (Main Library) every third Sunday at 2 pm in its ground-floor Tessman auditorium. Each month, in front of its rounded interior wall (which from the outside, silvery, looks like a mysterious metallic castle’s wall, and from inside, feels as if you are in the under-hull of an ocean-going ship) is a varying triple-cohort of dancers, singers, musicians, or other artists-unspecified, performing/providing experimental performances or completed work on its stage. It is free. Work can be highly skilled, well-practiced, or from almost-beginners; this variety is part of the thrill. Can the beginner outdo the more-seasoned performer? Sometimes, they do. If they don’t, they still radiate, as do almost all of the performers/creative artists, an earnest joy.

This past Sunday, lemon-colored hyacinths in a clear glass vase in the lobby greeted attendees, who descended dark carpeted stairs into the cool blue-gray luxury of the Tessman auditorium, to choose from theater-style tiered audience seats. Host Paul Reynolds, local artist and Salt Lake City main library arts-programming librarian, begins every show by expressing his delight about the performers he has found, or chosen, this month.

Ysa Pitman is the first of three performances: She wears Doc Martens, wide-legged silky green striped trousers, a dull black blouse; her face, beneath her crop of curly hair, has a gentle, solemn expression. After a one-word communication to her audience (“hello”), she begins to strum her autoharp, a surprisingly flat terra-cotta-colored instrument; she explains to audience, later, it’s also called a zither. The stage is large, brilliantly lit, plain. Something about the huge modern plainness of the stage, her small single figure on it, playing songs she has written, her head tipping down to her autoharp as she strums her fingers diagonally across it, makes you want to imagine other things onstage, surrounding her: arching small trees, rows of herbs, graveled walkways. While she croons words like “she is the ghost of a ‘we’ garden … everything already happened” or “why did you ask? / why did I ask?” from her tune “Why Did You Ask?” you  imagine, too, a protective rank of other musicians — playing what instruments, you do not know —  around her, while she plays and sings at their center, seated in her chair.

Asked questions after her performance (part of the pleasure of 12 Minutes Max is its expectation/format of after-performance questions), Pitman’s demeanor is shy, except when describing, in response to question, nuances and oddities about autoharps, or the intricacies of composing songs on various instruments (Pitman also composes pieces for violin, theater). Has she ever played in a garden setting, one audience member asks? No, she never has, she answers, smiling; but, she says, she would love to have a chance to do that. 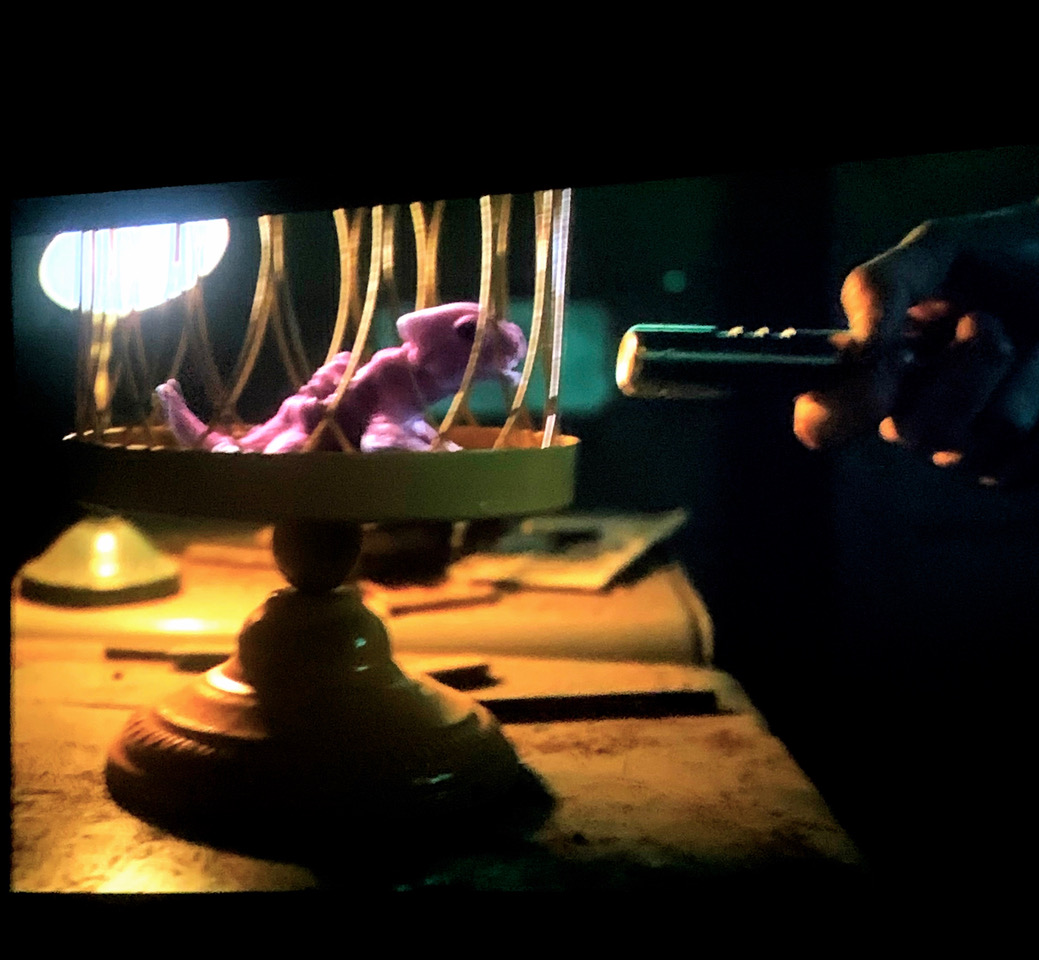 The second performance is local filmmaker/writer Arthur Veenema’s  science fiction film Atomic Spawn. (“Finally, we get to have it,” Reynolds says; Atomic Spawn has already shown at several other venues, including Boston Sci Fi, Austin Film Festival, and Nashville Film Festival). Veenema’s film lives up to the edge of its title; and it’s a wonderfully done film. With only two actors, an old one and a young one (three, if you count the stop-action-animated brilliant pink and white Komodo dragon which the young main character stumbles across in the Utah Skull Valley desert, where atomic testing has taken place), this film’s succinctness is due to its crisp mission. It’s classic Man vs. Nature; it’s also a sharply delineated Antagonist vs. Hapless Protagonist. Enchanting, authentic props, including its historic set, still-existing nuclear nuclear fallout shelters in Skull Valley, and its music (many of the tunes are old government propaganda tunes, says the filmmaker; he enjoys their quirkiness) add to its accomplishments.

Veenema’s movie (and his film crew’s: this film has a long list of credits) sets off an authentic war of wonderings in your brain: does one hate the spawn of the atomic age, the pink dragon (found as an egg in the Utah desert), or pity and love and try to understand him? He could destroy you; you must try to destroy him, to live. But he’s the creation, the brainchild of man’s modern, scientific genius. He’s your genie, out of your own bottle; how can you ever put him back? Or — outwit him?

Veenema, asked how many hours of filming and preparation boiled down to this very short film (it has to be short, to be in 12 Minutes Max) replies he’d rather not think too much about that ratio. But the quick, humorous tone of his voice radiates pride; it’s that quick cheerful humor which comes from an artistic creator, the exact tone you hear over and over onstage, post-film, from directors at Sundance, from writers answering questions from a crowd, at a reading. Creators are, rightly, proud.

Last at September’s 12 Minute Max is a dance piece. Modern dance pieces are the bread and butter of 12 Minutes Max, letting you be part of the freshest choreographies you may ever see. Seeing choreographers and dancers sitting together on the edge of the stage afterward, sometimes swinging their legs, as they turn to each other, about to answer questions — is a thrill: you share the fresh euphoria of the dancers, sense the pride and gratefulness choreographers feel about the performers. (Often, dancers are asked how much of the performance is their own invention — audience members seem endlessly curious about how innovation is split between dancer and choreographer, in modern dance). 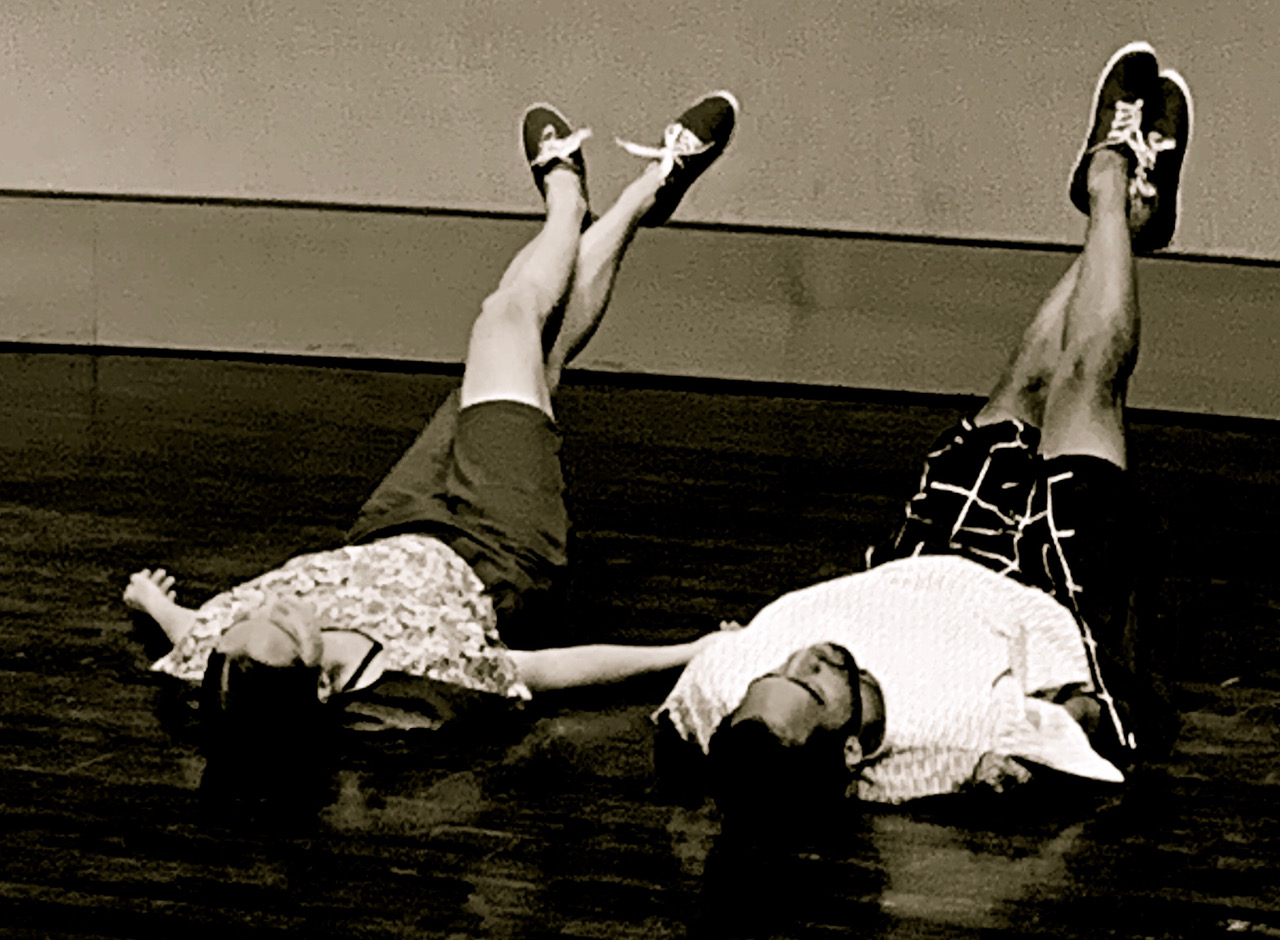 “Emerald Runways,” an excerpt from a longer dance piece by dance collaborators Haleigh Larmer, Morgan Phillips, Masio Sangster, Allison Shir, and Melissa Younker, offers up to the stage a dancing duo: Morgan Phillips and Masio Sangster. Both wear modern kimonoesque attire (as in medical scrub attire, in uncoordinated, hapless, well-worn and washed colors and patterns). These clothes grant mostly free movement, but refuse to reveal much about their bodies: a deliberate modernism. Ditto their identical, flat-soled, brilliantly green shoes, tied with shoelaces. One dances alone; then two dance together, an emotional and blossoming progression from lonely I to liberated and happy we. (This unhappiness-turning-to-happiness reminds you of doomed Christopher McCandless in the film “Into the Wild” — who wrote in the journal which survived him, before he perished alone in the Alaskan wilderness, the anguished words: “Happiness is only shared”).

Why do you dance, an audience member asks, during the Q&A. Because, choreographers and dancers agree, one by one, they have discovered a delicious compulsion. Movement, or dance, helps them both locate, and express, emotion. Each one has, over time, become more and more addicted to that expression. “Just as a person might be addicted to, say, keeping a journal, or a diary,” one says.

Lemonade and snickerdoodle cookies, in the shale-cobbled Main Library lobby, follow this month’s performance. Here and there, performers, audience, and Reynolds converse with each other. Happiness. Shared.